Some of you might remember the controversial UB52 review where @amirm found a nasty resonance, and ended the review there, for which he received some flak.. 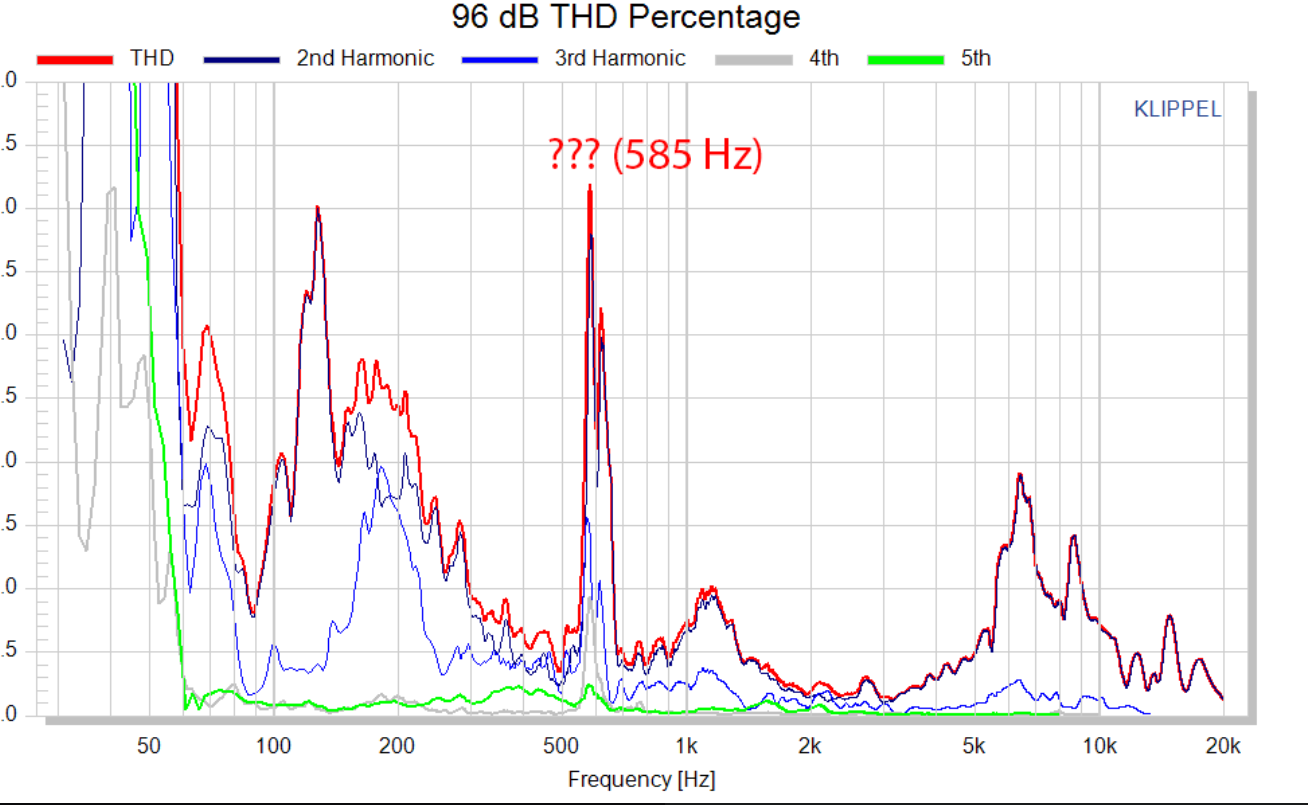 Some argued it is just the bad unit he received, and that we should not base ourselves on it, asking for Amir to test another one, and so on, the rest of pages were spent arguing the point of the resonance; is it inherent in the design or not. For the most part, i assumed it was a factory issue.
This went to the point even greats like @AndrewJ himself joined the thread, along with famed KEF engineer @jackocleebrown and @joentell.

Today i receive mine, sit down and listen. Since i saw the ASR review beforehand (i guess im a masochist, still going out and getting these ) i did try to play with a tone generator and see what i could find. I heard something slightly, but at volumes that were already uncomfortable to me so i brushed it off.
Upon more listening sound was not smooth, a bit harsh and "edgy"? I was a bit tense listening to them, and surpised, people keep praising them so much. Only here do i bring out the trusty old measurement setup to see whats going on. 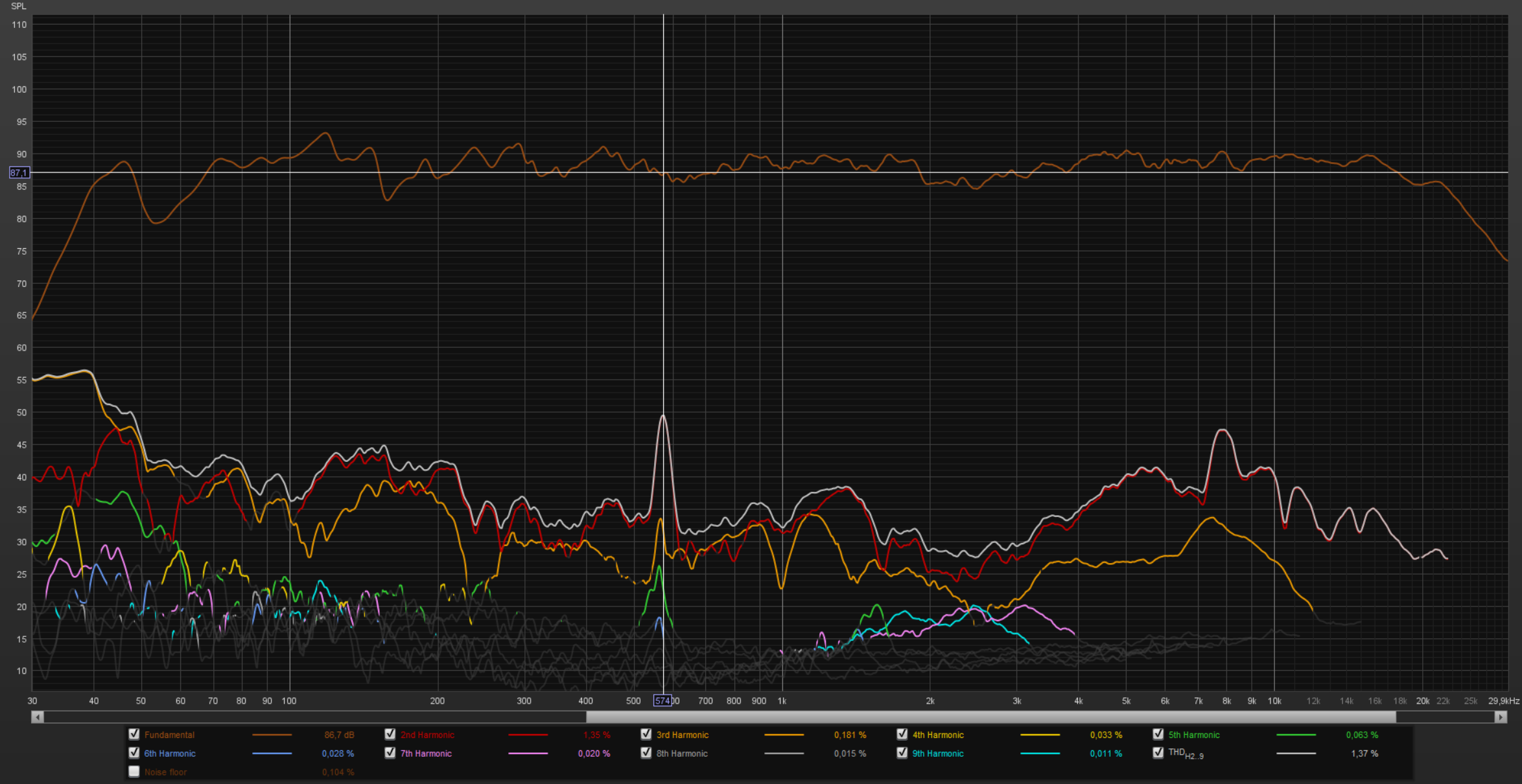 I will say they sure do have very consistent production, because the peak is -exactly- 575 like Amir's.
As a bonus, look at 7.85khz (reaching 0.7% THD, of which 0.135% is 3rd harmonic), and the mini-peak at 9.62khz. The 1.2khz peak is there as well.
Exactly like on Amir's, however his is far greater resolution, Amir is doing us a real solid with these measurements.
Even next to these peaks, the distortion is on the whole elevated. These higher frequency peaks might be the harshness i heard..

One positive surpise is the -3db point for low end extension is 39Hz (note: in my room), and playing with tone generator confirms as much. Port is tuned to 46Hz which is also seen. On of the benefits of such a 3 way is the low unit crosses at 200hz. This means Andrew can basically design a little subwoofer, and the little 5.25in sure does a lot of excursion, no complaints with the low end. Wonder what he could have done with a 6.5"!
The crossover is crossed brilliantly and overall they measure flat.
Note the scale is 5db/div, not bad! 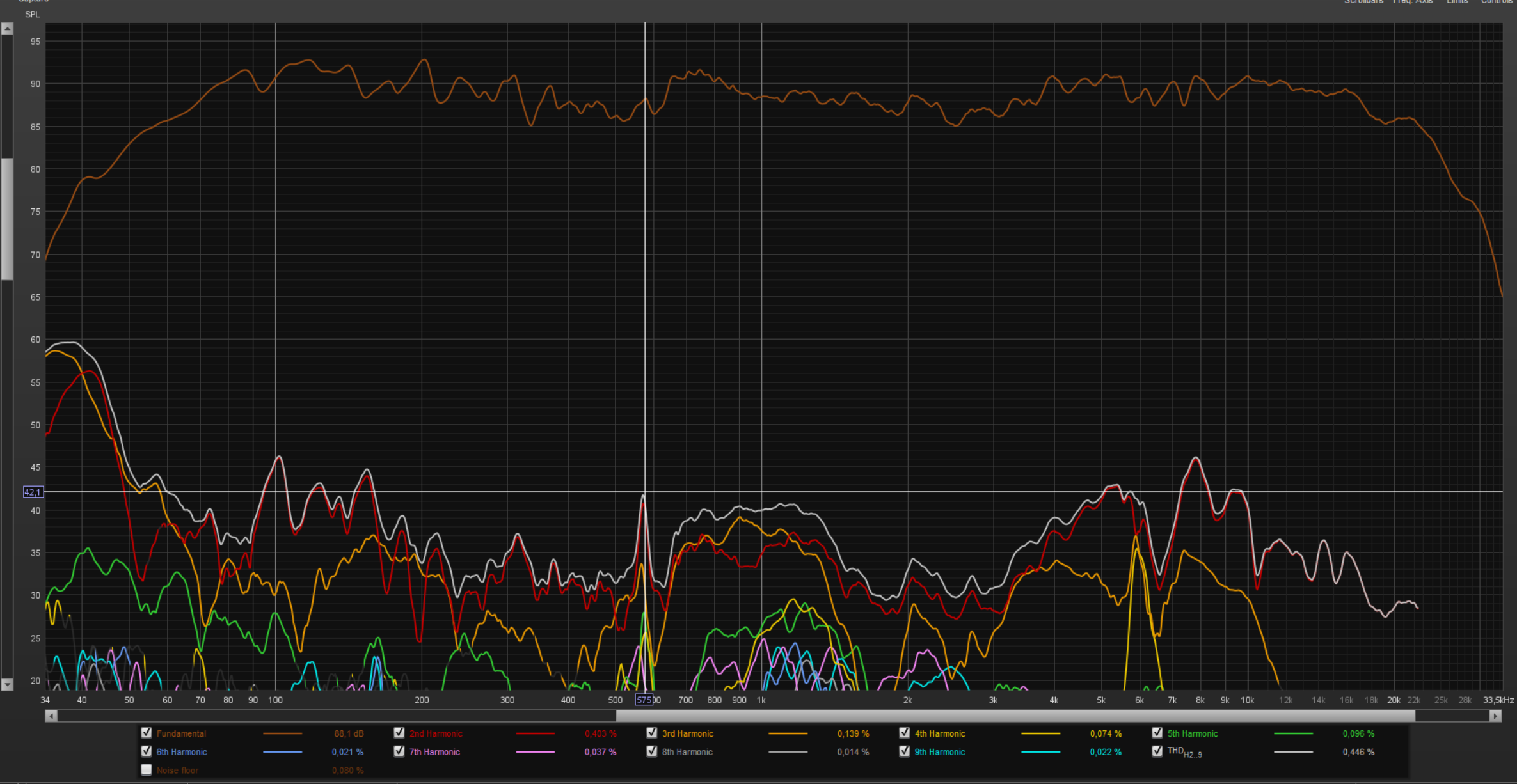 Same story, just less bass because its further from a corner.
2/2, think some more work in the factory needs to be done..

I have to disclose the measurement setup:
Mic was positioned 15 centimeter away, in between the bass and coaxial units. I tried directly in front of the coax, but you get very similar results, not sure which is more technically correct.
Measurement was done on 1st gen Scarlett 2i2, ECM-999 mic, and twin TDA1541 (yes you may now crucify me) DAC i made myself but it is a lot lower distortion compared to the speaker. Will be getting a MOTU M2 soon (as i dont know anything with better specs for the price, message me if you know) and if you want i can repeat the measurements again.


I had the ADS L710 for about 2 years, and after much deliberation thought, im ready to see what around 500€ can buy you today (as these speakers are exactly half a century old, 1972).
First i got the RP-600M but was not super impressed, you could say it was okay but the performance was always coming from the speakers, imaging and soundstage suffered no matter how i positioned them. After reading much rave reviews on youtube (im looking at you cheapaudioman ) , interviews with Andrew ( seems like a friendly guy so maybe that played a part too.. ) and some of his papers and other material, i bit the bullet. I will have to mull this over and live with them a bit longer, but i do think to myself..."this ain't it".
Fellas, how many speakers does one have to buy before you get a decent sound!? My whole monthly salary is 800€, this is serious cash im playing with here. Dont think i'll be able to afford LS50's any time soon. I'd just like to hear good sound

Is the third iteration of the design ever going to be sold in the EU or is the UBR62 a 100% for USA product? The unifi 5.2 are delivering on what they cost me, but I'm interested in the "evolution" of the concept.
OP
M

jmillar said:
Is the third iteration of the design ever going to be sold in the EU or is the UBR62 a 100% for USA product? The unifi 5.2 are delivering on what they cost me, but I'm interested in the "evolution" of the concept.
Click to expand...

They're freely sold in the EU, yeah. But despite having the larger 6.5in driver, they were tuned differently, the poor extension means a mandatory sub. Im not sure if they just reused the driver from the DBR62, which is a 2 way, meaning a higher crossover point, meaning it was not designed as a mini-sub for 0-200hz duty like in the UB52 (which kind of shocked me what it can put out given it's size). But that is just my guess, and a bit off topic, Andrew knows his stuff anyway 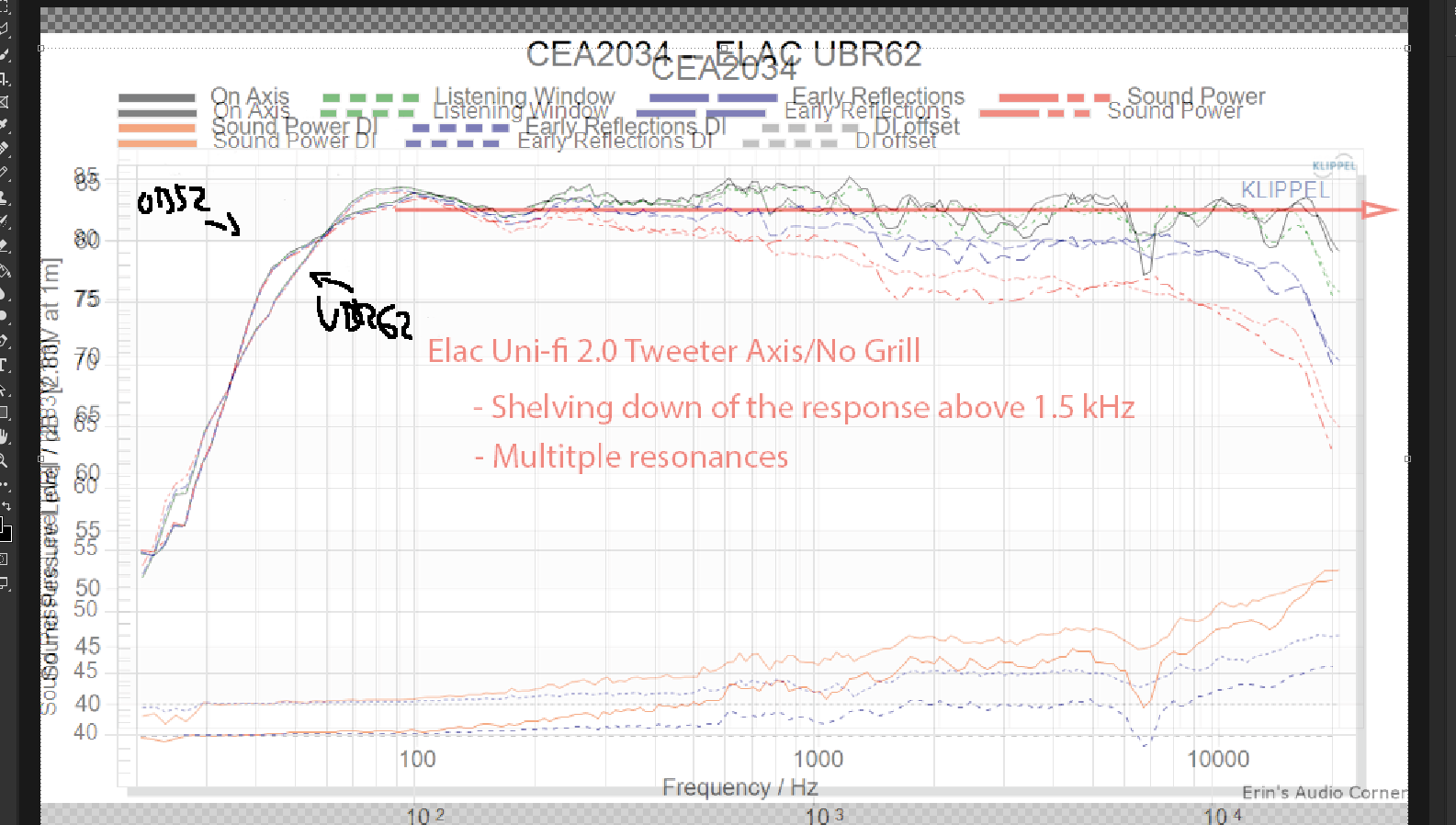 With very minimal, low-Q EQ its possible to have this sort of response, *in room*.
5db/div 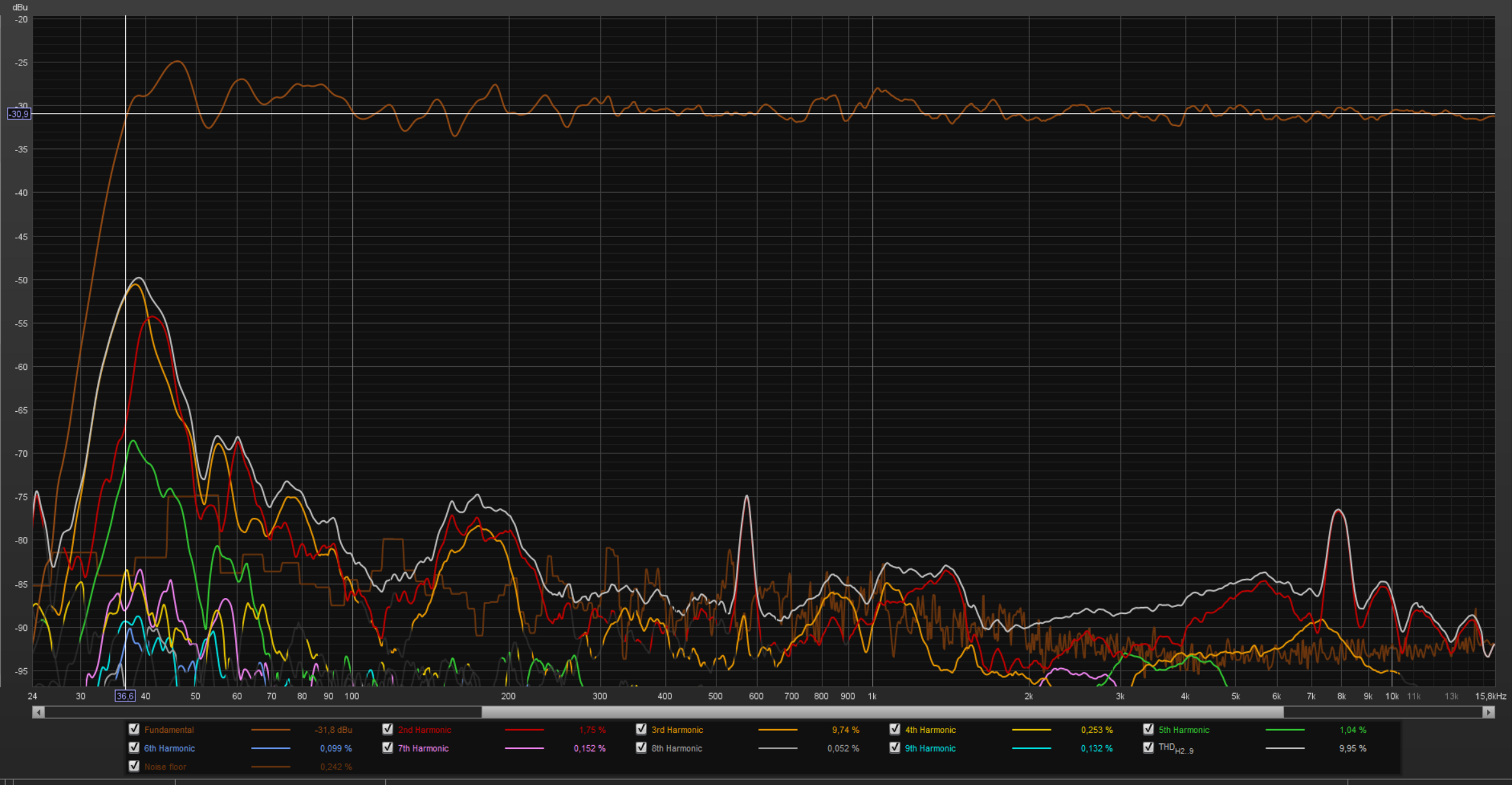 Just when I thought I understood vented speaker impedance!
2 3