This looks more like an "on purpose" design.
Second harmonie seems to be arbitraryly set to a level, noise may even contribute to warmth the sound.
Still not terrible, but that seems OKish for the goal and price.

GWolfman said:
On another note, why would anyone ever need that much gain for a pre?
Click to expand...

For a DSP chain; DSD (or PCM to DSD), EBU R128 normalisation, EQ's individually or all together.

GWolfman said:
Weird, it almost looks Iike someone drew a line with a ruler at ~68dB. Ok, it's not a hard limit, but odd that it's fairly consistent.

On another note, why would anyone ever need that much gain for a pre?
Click to expand...

To tasser anyone approaching the encyclopedia with biased intentions ? 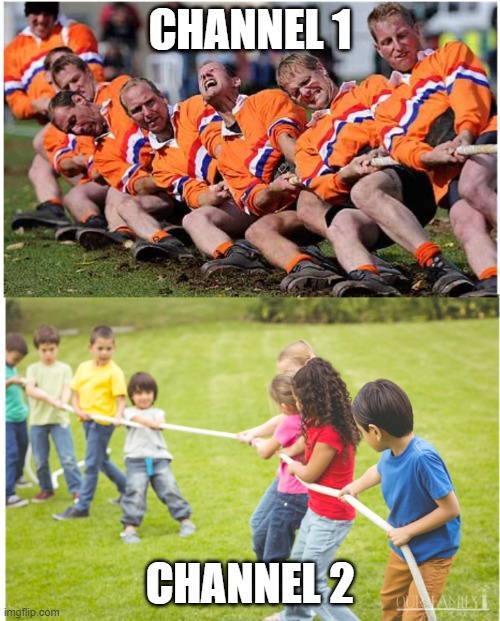 @Mnyb term is quite OK.
Harmonie (ἁρμονία) means something is in a perfect order and nice (Estetic category) tuned to each other. The opposite would be disharmony and ugly (again Estetic category) in disorder even chaotic. As this is about specific deviation from the order then it's a harmonic distortion.
Last edited: Dec 4, 2021

GWolfman said:
Out of curiosity, anyone know the VOUT of the power supply? With 4 pins I'm guessing there's either two +voltages or +/- rails.
Click to expand...

There will be 6.3v for the tube heaters and then the HT rail which could be anything from 50v to 300+ vDC.
https://gtkc.net
https://vintagetechnics.audio
L

If you want "warm Tube sound" you getting yor moneys worth this one...
M

ZolaIII said:
@Mnyb term is quite OK.
Harmonie (ἁρμονία) means something is in a perfect order and nice (Estetic category) tuned to each other. The opposite would be disharmony and ugly (again Estetic category) in disorder even chaotic. As this is about specific deviation from the order then it's a harmonic distortion.
Click to expand...

I’m no sure that harmonic distorsion is a harmonic experience the term is loaded with positive values .
When you get a THD it’s always overtones that bunch up higher in frequency? I’m not sure that will sound good on all music ? Especially when you stack this components up , add this to the tube DAC recently tested and even the distortion from the DAC will have distortion

I’m not sure about this 2nd harmonic sounds warm thing . It looks like a one size fits all solution it can’t really work properly ? For all music in all situations.

The safe bet re THD is as low as possible, do no harm to the signal. Then it won’t matter if it’s even or odd harmonies in a falling magnitude etc etc as they are not audible anyway . This would actually work for most people as at least the sound is as it is fro the source . If sounds meh write angry letters to the producers and then use tone controls or eq
M

... and what I mean there really is no “so good device” you can put in a signal chain that magically fix everything.

Maybe it come in other kind of glas bottles

I think some has this the other way around , you put in music in one end of the system and then it starts to sound better and better in each stage . When in reality you put in digital analog electrical signals that degrades slightly in each stage.

Azathoth said:
Apart from the supposed sound performance you get out of these, seeing the tubes glow and feeling its warmth adds to the whole listening experience
Click to expand...

Are they 6000K or 3500K ?
Remember anything above 4500K will make you stay awake, due to melatonine segregation based on lighting conditions.
Last edited: Dec 4, 2021

"Who would buy this?"

Back in the late 90's, Musical Fidelity launched a cheeky cylindrical range of goodies using valve and/or solid state - the original 'X' series. There was a soft toned valve preamp, similar phono stage, a dac which 'used to' sound/perform quite well and what I wanted to mention, a valve line buffer, the X-10D, which was marketed as an impedance matching box between inexpensive CD players and amplifier inputs. I can't argue about the impedance matching, as it offered highish input impedance which I thought at the time suited cheap CD player line outs better (I don't feel this way these days - read on). Stereophile tested it - 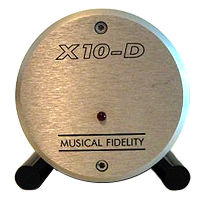 Sidebar 3: Measurements Although it could be conjectured that the presence of tubes in the X-10D might add a certain thermionic something to its sound, there was nothing in the measurements that would confirm that hypothesis. In fact, the Musical Fidelity appears to use a well-engineered...

But the box as supplied really did alter the perceived sound repeatedly, adding a certain weight or 'thickening' to the sound and seemingly cleaning up subjectively, the 'hashy highs' of the then popular Maranta 63 KI Signature CD player which 'everyone' bought back then.

I got one for little money a good few years back and did a 'Rock Grotto' update on it with fresh Russian mil=spec valves. There was an improvement sonically with the update to the point I couldn't any longer 'hear it' in the system, so it was abandoned and now lives in storage along with the other stuff I accumulated. The transistors act as voltage doublers in the power supply I believe.

Sorry to drift, but here's the X-10D as supplied - would be interesting to see how the review box looks inside... 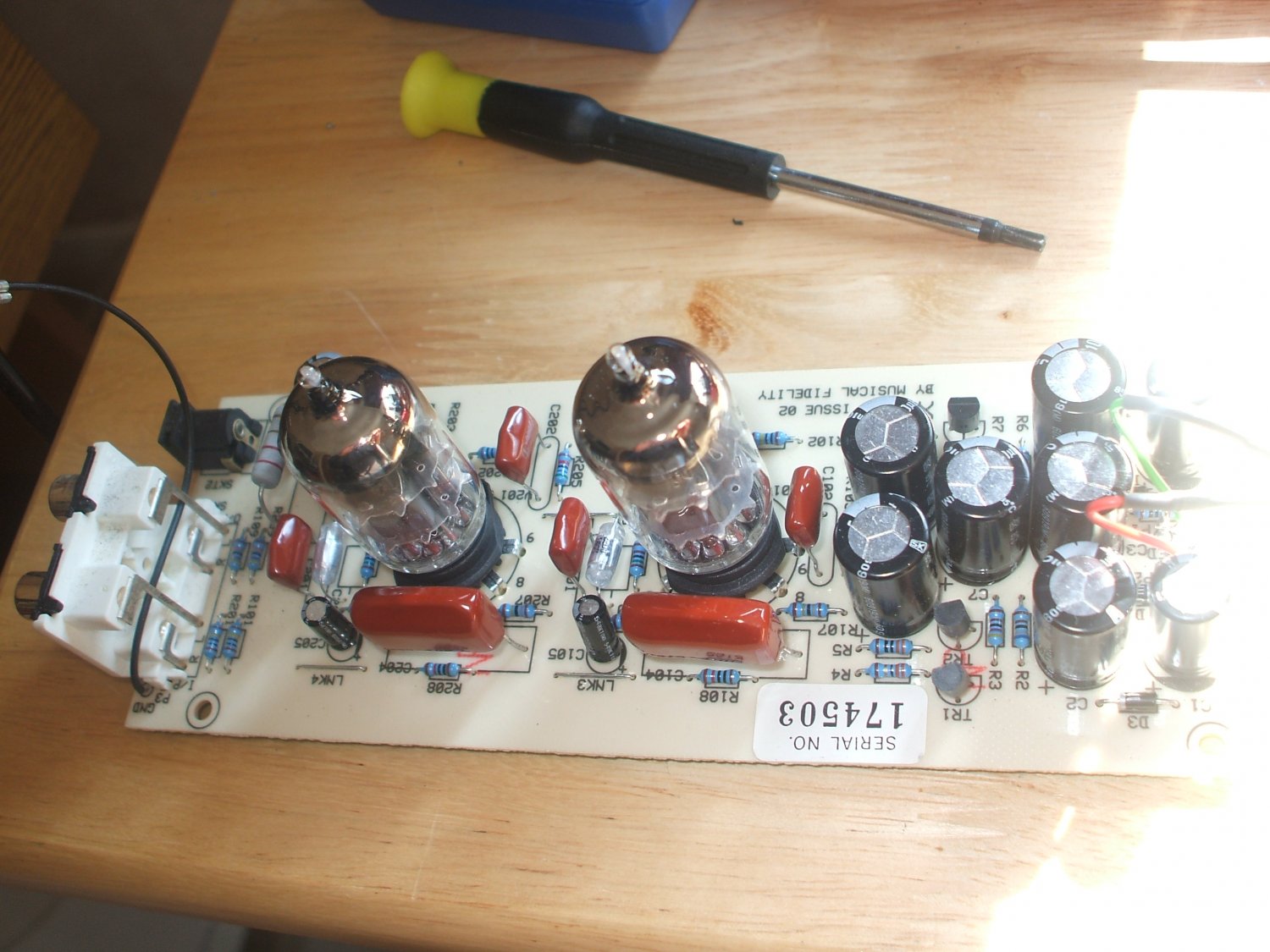 @Mnyb I told you in Estetic (Aesthetic) categories, won't get into details. Fell free to explore it more in theory of medieval classical music and how something modern and totally opposite translates categorically and to mains (nice and ugly).
Rule is don't make more harm than good and any alteration is distortion.

This is a weird product as it has way more gain than ever needed for preamp duty, no nice Panther rating from my side. The Distortion is NOT the problem here, IMHO.

Hey, it has three valves, not only two as I thought by seeing the introductory picture...

In denial of 50+ years of progress to respect integrity of the input signal. Headless panther.
3

This is another way to understand the almost forgotten value of $1.

Walter said:
only emphasizing the 2nd harmonic, which is what supposedly gives tube gear its appeal.
Click to expand...

I don't think this is true. odds are more obvious so when wanting a clean sound they are more important to be avoided.
but odd harmonics can also be a goal for saturation. this video shows how diferent type of saturation efects the sound:
can't judge tube effects by how clean the second harmonic is

dasdoing said:
I don't think this is true. odds are more obvious so when wanting a clean sound they are more important to be avoided.
but odd harmonics can also be a goal for saturation. this video shows how diferent type of saturation efects the sound:
can't judge tube effects by how clean the second harmonic is
Click to expand...

I am loving everything I am hearing on that video, regardless of it being made distorted or saturated, or not. The envelope is great.
You must log in or register to reply here.