The loudspeakers AC and DC have relatively narrow dispersion of constant directivity 90° by 60° nominal from about 800Hz on. Otherwise I would consider them ‘perfect’ in regards of available extension, spl, HD, IM, no resonances etc. Nice cousins to JBL’s M2 maybe.

When these nice guys are set-up as depicted, sidewall reflection in general is pretty low in amplitude. An early horizontal reflection hitting the wall and then travelling right to the listener would originate from some 110° off axis, referred to the speaker baffle. Similarly vertical reflections, even from the floor are highly attenuated. A real rug helps with that. The wall at which the speakers are situated is illuminated 135° off axis, again referred to the speaker baffle. Output in that direction is virtually zero from 300Hz on. Not so early direct reflections are attenuated by distance.

The speakers are equalized for a ruler flat frequency response on listening axis 15° to the side. The overall soundfield including reverberation depends on the distance to the speakers. At about 3 meters it replicates the Harman tilt. Farther away the tilt develops kind of a knee at about 1kHz, sloping down steeper below, while flattening towards the treble.

I didn’t tempt to buy something else. Why should I? The overly sharp “imaging” annoyed me a lot. Slightly move the head, and “stereo” flips away, or even worse, the scenery was caught but nor “realized”; try to listen into it, and it hurts by inner contradictions. I do not like to negotiate with the stereo when listening to my beloved music. The more immaculate the machinery appeared even to my untrained ears, and it did really, the more I had to circumvent its presence in order to refocus on music. Meh … I know that “imaging” is kind of a holy grail for audiophiles. I’m way to lazy to participate in that honorable quest.

The loudspeaker ZUUZ is a high output, professional Distributed Mode Loudspeaker (DML). As a dipole it radiates virtually nil to the edges, but otherwise shows a wide, frequency independent radiation pattern. Due to its operation principle the relative phase of the output is more or less chaotic. FR is as grainy as can be, but balanced in the grand total. Another peculiarity is the attenuation with distance—only 3dB per doubling, in contrast to the common 6dB. (Never proved that, though.)

ZUUZ is fed with left+right summed and high-passed. The x-over point is 1kHz, with a shallow 6dB of a slope. Signal can be delayed, and of course the relative level is adjustable--anytime. The dipole is positioned so that the null points at the listening area. The attenuation of direct sound is at least 40dB or so, referred to AC/DC combined.

To my ears, personally, that solved the probs. The knee in the reverberation field is mitigated, so sound cleared up farther away. The “imaging”, the most annoying gimmickry, if my preference stands public criticism, has turned into a well behaved supporter of the musical presentation. The focus is exactly not blurred. Only that it lost its metallic, inorganic razor edge which otherwise cut through my mind.

The famous “female voices” find and keep their places right as if they were recorded mono. Revealing that one lady unreasonably prefers a dynamic, the other a condenser type mike. The brand of which is written wide across the image—just kidding. AC/DC, the teeny posers from down under play in a puppet theater, no jokes! Especially contemporary high-tech piano recordings frustrate, though.

Again too much of a virtual realism? Maybe because the real thing is still the best excuse to play as loud. Without the player in person the ceremony isn’t there, a very personal preoccupation. HiFi stereo is not really about reproduction. It is an artform in its own right, hence enjoys independent design freedom in all directions.

Of course the described set-up isn’t for a family room. I don’t need one. But I have to admit, the systems’ massive occupation of my lofty home hovers on the edge to unbearable. It’s huge and cluttered also. Craftsmanship and esthetics are substandard to say the best. I’m going to translate the results to a smaller realization of the basic principles. 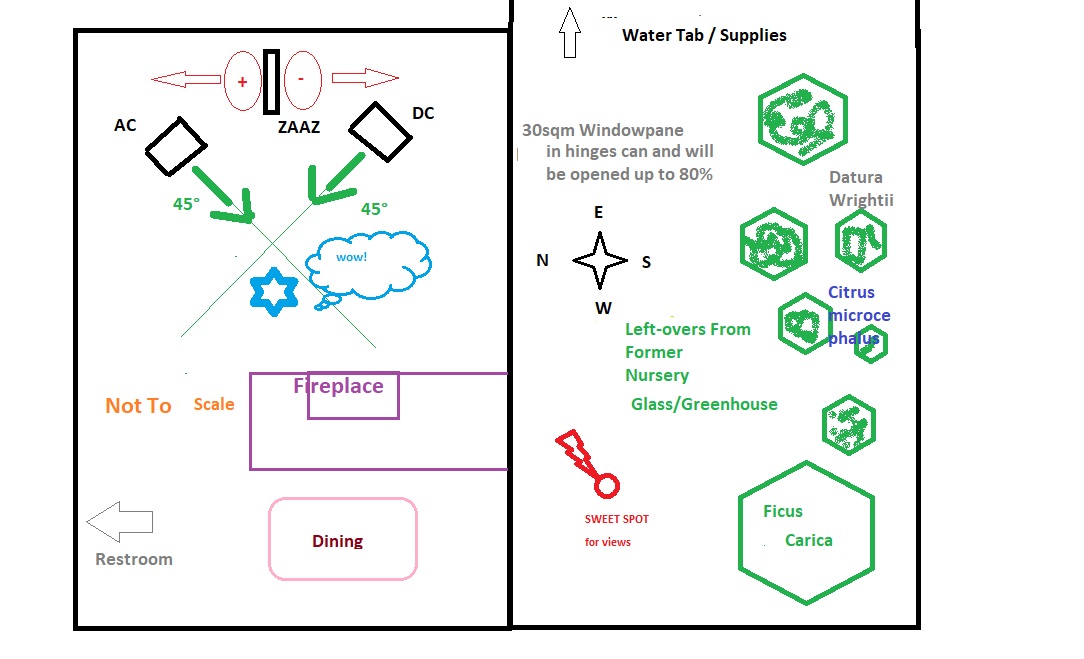 Not the least to have, with smaller speakers, the opportunity to swap dining / living room. I think in winter it sounds better to invite for dinner in front of the fireplace.
Last edited: Nov 10, 2021
OP
F

May I exemplify, referring to Toole:

reflections build up a reveberation field, which eventually determines the spectral balance in total, the direct sound ist just another contributer
reflections give hold to the hearing, supporting a "you're there" sensation

With the set-up shown, early and secondary pp reflections are kept in check by using comparably narrow dispersion, sound balance is kept in order by the "constant directivity" approach.

The desired amount of reverbaration, may it depend on the social situation, or even demanded by the recording, is mixed in by the monophonic DML. All its peculiar properties from mono to chaotic are o/k with Toole's idea of how stereo works.

More reveberation coincides with a light-up sound in the far field. That's the right direction of a correlation.

Alas, You don't find me on Air Bread And Breakfast, sorry. 'Have to try Yourselves.

I know this may come across as rude, but I think you may have not received any responses because what you've written is very confusing. The image of your home layout even more confusing. I don't know if this is satire or just a lot of clarification is required. A photo of your listening space might help with orientation.
H

I'm not sure of the benefit of the sidewall reflections largely being a mono signal, but other than that, makes sense to me.
OP
F

Neither nor, I'm o/k, really. The text isn't confusing, I admit the image is. I might re-do it. Thank You!


hex168 said:
I think I get it. You are using moderately narrow directivity L and R speakers crossed in front of the listening position (LP), plus one Distributed Mode Loudspeaker(DML) fed L+R edge-on to the listening position (LP), so the LP and the front wall are in the DML's dipole nulls and side wall reflections are largely from the DML. Clever.

I'm not sure of the benefit of the sidewall reflections largely being a mono signal, but other than that, makes sense to me.
Click to expand...

Exactly. Regarding Your caveat, I don't think that the reflections being 'mono' is of any relevance. This is derived from Toole's input.

The objctive was to make the reverberation adujstable. To have it mono spares one extra speaker.
OP
F 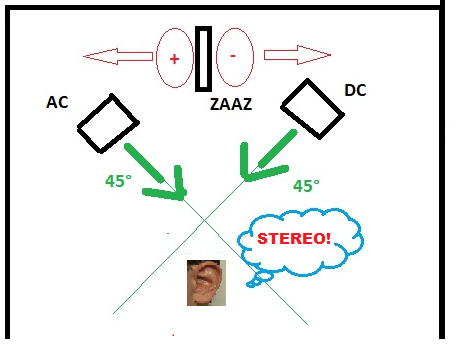 Interesting thread but no action lately.
Looking at the picture/drawing of your set up I would like to ask how you manage to get + phase to the left and - phase to the right with one DML panel that is operating in mono?
I thought DML panels had the same phase on the back side and front side?
Looking to add ambience tweeters or DML panels to my system so this is of greate interest for me.


Edit: DML is a Bipolar device (radiates sound in 2 directions with the same polarity).
Last edited: Dec 1, 2021
You must log in or register to reply here.

Y
Refining a listener and loudspeaker model based on readings of Lokki, Bech, Toole, et al

What defines a good near-field speaker?