Coming soon.
Click to expand...
We do have a area for commercial entities to promote their products.

You can start a new thread here .
independence, we do it together..
https://www.patreon.com/audiosciencereview

I would like to apologies for everyone, I didn't mean to disturb this thread in any way.

MicroAudio said:
I would like to apologies for everyone, I didn't mean to disturb this thread in any way.

Thanks
Click to expand...
No worries! I think it was great to hear of it here, but then go to your new thread to have more discussion and details.

Matias said:
FYI Purifi is working on new amp modules with higher power and power supplies (source: this month's Audioxpress magazine Purifi's factory tour article).
Click to expand...
Sounds great, because I am working in parallel with that news from long time, and I am few steps ahead from that.

[ In 4 Ohm it delivers 1kW with amazingly low 0.0006% THD+N. This is bridged, but it says a lot about the performance. The "notches" you see in the graph below comes from our measuring equipment switching measuring area and isn't able to keep up with such low numbers. The actual distortion around 50-500W is even lower. Probably down towards 0.00025%. ]

[ * We use a huge power supply of 3kW. This has plenty more capacity and runs cooler at heavy loads. It will also result in much lower distortion at low frequencies (at high loads)

* Our amplifier is (as far as we know) the only Purifi model that has bridging capability. A lot of testing has been done and special considerations are in place to make this work as it should. Looking at the measurements of 1kW with 0,0006% distortion proves this is flawless... ]

Yes, I saw that, 3k usd for the stereo Vera amp or 6k for 2 units running bridged. Seems like an excellent option already.
Amplifier SINAD list

All screwed in and hooked up, visually checked a couple times, but no electrical testing done yet. Modushop chassis is really nice, and 230mm x 280mm is plenty of room for my simple purposes. Planning on simply butting SMPS to the 10mm faceplate for now, but strongly considering thermal adhesive pad and/or even drilling and screwing. Shortest thermal path. Leaving option for LED or switch on faceplate.

Corner screws on SMPS1200 weren't fully countersunk, creating a gap between bottom plate and chassis. Instead of countersinking further, just removed the corner screws and replaced with slightly longer ones from chassis bottom.

The back plate is perfectly machined from Modushop, but had to Dremel out some chamfers for the outer Deltron pins under the EVAL1. Would recommend forgoing the 1mm recess, as the XLRs are rated for 3mm chassis thickness. Not sure about the Deltrons, but not planning on using them anyway. All about the speakONs...

Overall, a really easy and clean build so far. Glad I got both the Hypex and Purifi cable kits, though of course the second Purifi kit was total excess.* Had I planned better, would've just drawn it all out and had Modushop drill the bottom plate. Unnecessary drama, and luckily ended up only about 0.5mm out at various points.

* EVAL1 kit comes with all the necessary EVAL1 cables; I used all of them. I unnecessarily ordered an extra EVAL1 cable kit.. The Hypex kit includes a 120V jumper and line power cable that EVAL1 kit, naturally, doesn't.

Sweet. Now if you only had some black, button-head screws... 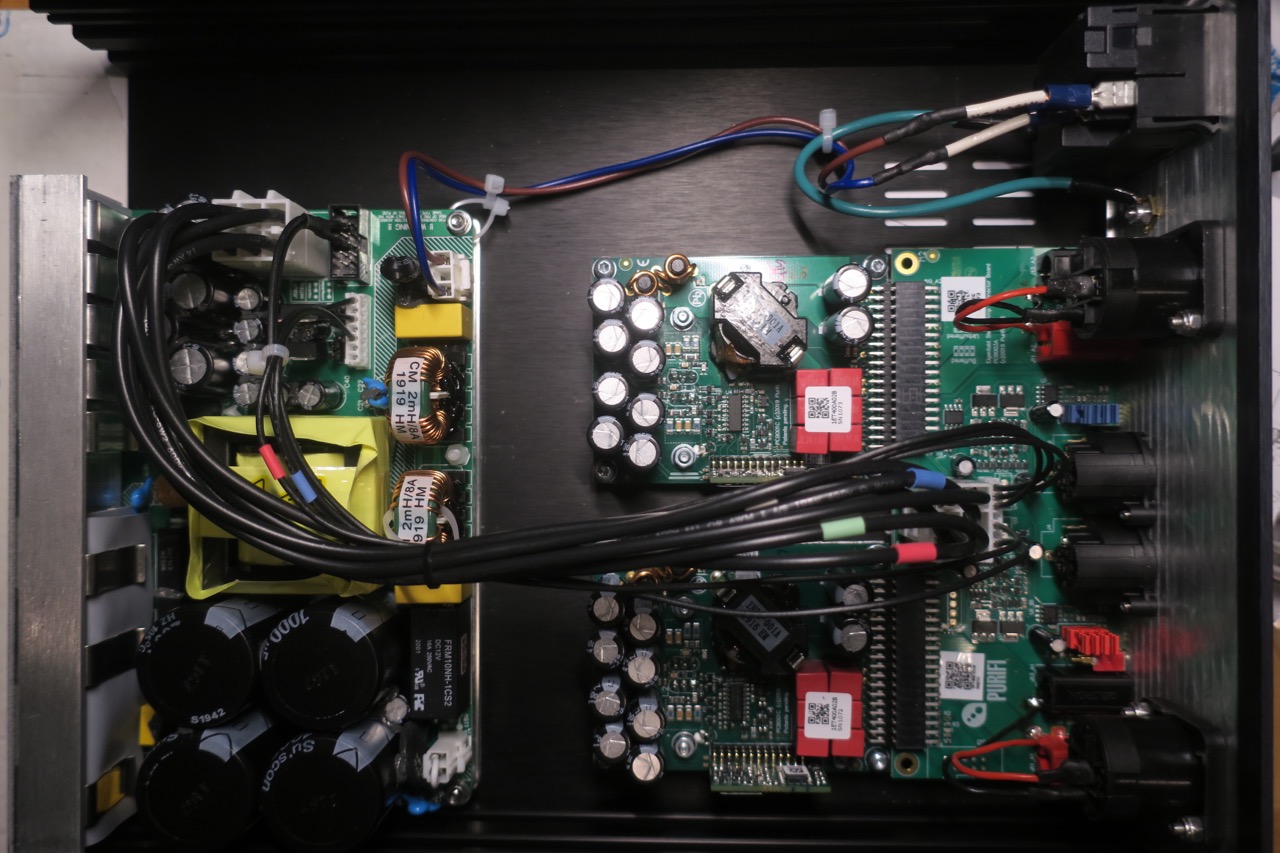 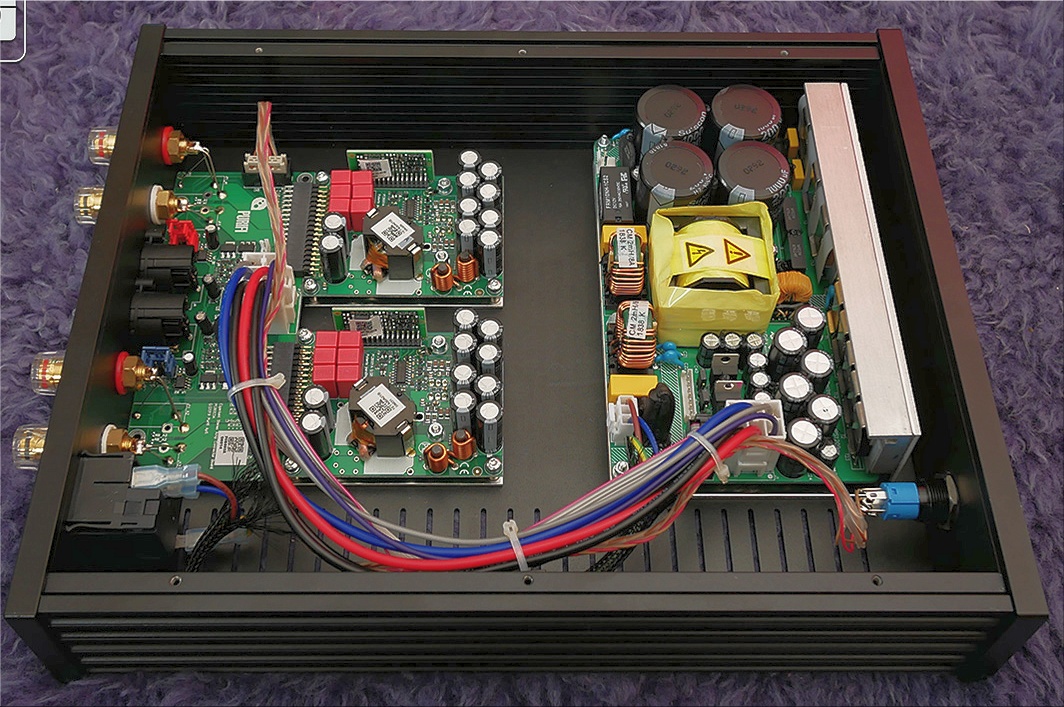 JimB said:
Sweet. Now if you only had some black, button-head screws...
Click to expand...
If only, though I do prefer stainless to black oxide, and black stainless is pretty much unobtainium.
M

mikebarney said:
Albany County Fasteners has black anodized stainless hardware. They're a great, inexpensive source for stainless hardware, I use them in all my projects.
https://www.albanycountyfasteners.c...crew-4-40-Black-Oxide-Stainles-p/12070000.htm
Mike
Click to expand...
Thanks; you're absolutely right. Looks like McMaster has all sorts of black oxide stainless, too.
OP
J

maty said:
Hummm. Wires...
Click to expand...
I agree about the mains - should be tightly twisted and against the side. Care to add more points?

Having cables run close to electronics is usually not a good idea. If they also barely keep distance with the coils ...
"Comment is free, but facts are sacred" - C. P. Scott 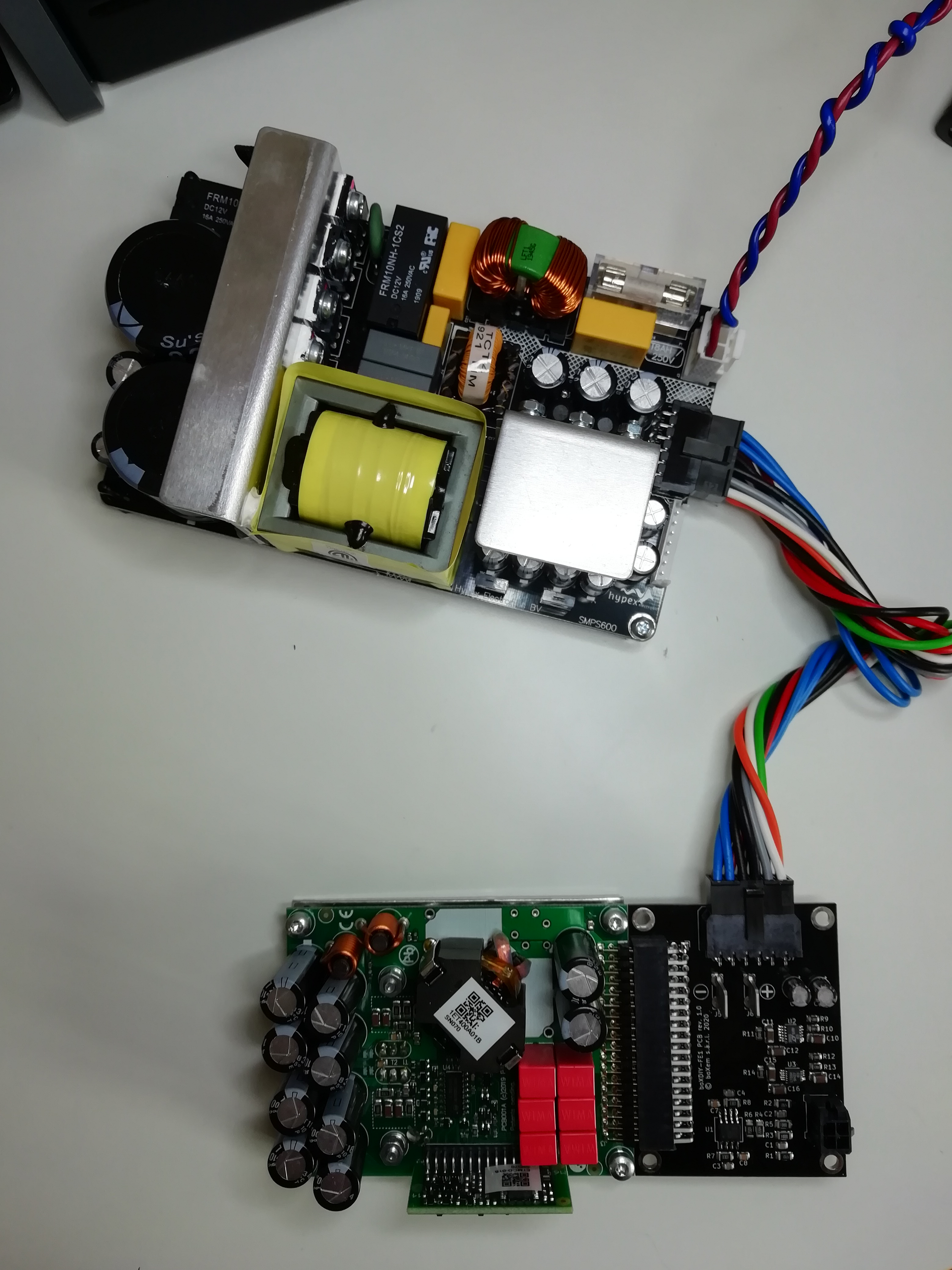 1ET400A + SMPS600N400, first time powered .
Since the magic smoke didn't left the components, next step is to put something at the input and look at what's leaving.
Last edited: Jul 1, 2020
Hypex Ncore and Purifi Eigentakt power amps​
OP
J

Cute! I see you had your own board made. Once you are happy with it, are you able to share some details?

JimB said:
Cute! I see you had your own board made. Once you are happy with it, are you able to share some details?
Click to expand...
Sure!
Basic idea is to have a drop in replacement NC400 -> 1ET400.
Electrical interfaces being the exact same as NC400
- integration is easier for beginners (one wire for enable, the rest is straightforward)
- pre-made cables are easy to find for new builds
- one could retrofit an existing NC400 amplifier by simply drilling new holes in the chassis

The buffers include regulators (LT3042/93) and an OPA1612.
The version you see has fixed gain, I may add one resistor and two jumpers for 3 gain settings (unity + 2 others) for production boards.
Last edited: Jul 1, 2020
Hypex Ncore and Purifi Eigentakt power amps​
You must log in or register to reply here.
Share: Facebook Google+ Reddit Pinterest Tumblr WhatsApp Email Link