I (and some others) were tuning a friends home theatre yesterday. They use a monolith HTP-1 with Dirac bass control as their normal. All JTR speakers for base level and Revel C763L in ceiling atmos speakers.

Measurements were made using REW MMM and pink periodic noise to get spatial averages and an motu m4 interface and Earthworks microphone. Computer was a macbook pro 2018 model using either hdmi adpater out or out to motu m4. The htp-1 has a very cool signal generator option that you can output say left channel from your computer, then within the htp-1 interface, you can select the signal generator tab and the input is left signal input. Then you can route the output to every speaker connected one at a time. No need for asio4all or other things to get each channel to play individually. Saved a lot of time.

I wanted to compare the 16 band PEQ options in the HTP-1 to Dirac eq, as well as using smaart to look at phase.

Here is what I got from the experience.

1) Dirac as an EQ is pretty good. My PEQ and it's auto were very close and could easily be contributed to microphone differences and/or placement. Also the house curve choosen. I did a 0.5db / octave roll off as that seeme to match pretty well with natural roll off. In total actual time EQ'ing and measuring it would probably be about 5-6 hours for me. Dirac can do it much quicker with pretty good results. 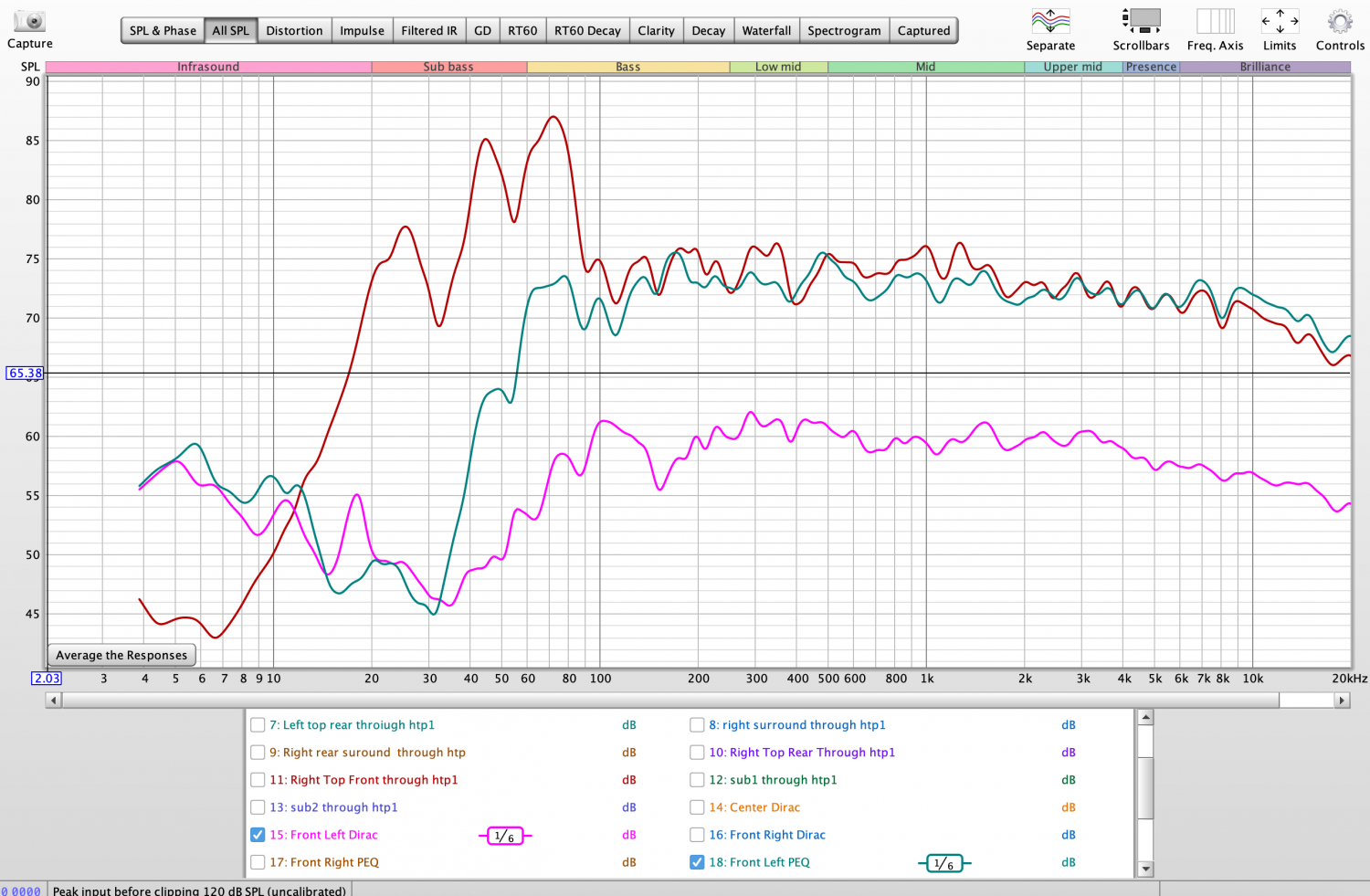 Adjusted levels in REW to overlay my PEQ to dirac. Dirac did a very nice job here. Differences could easily be microphone placement or house curve used. 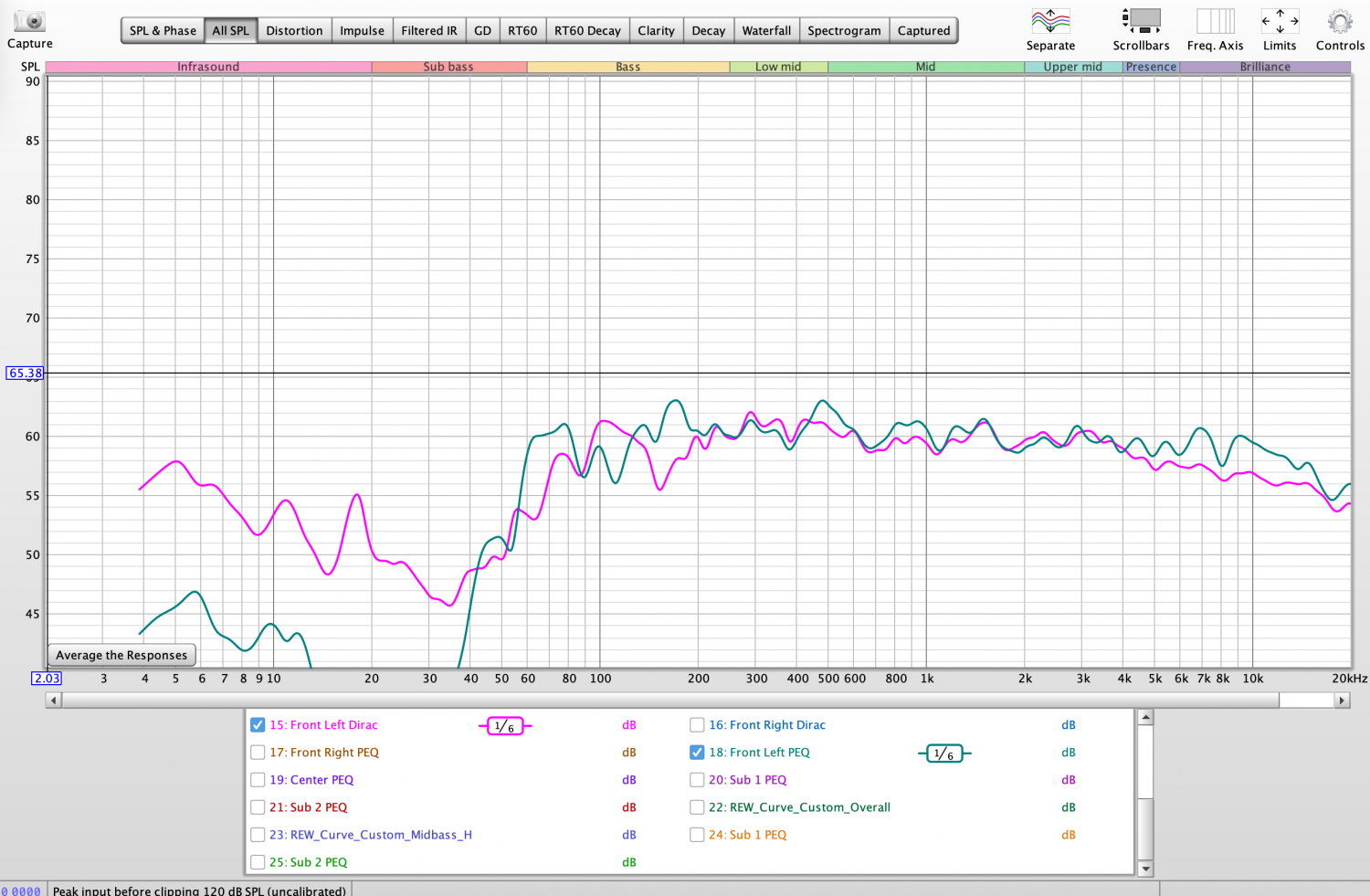 The one problem I have with Dirac is it cuts to the lowest speaker level possible (even lower than what my lowest natural level speaker was measured at as seen below). It won't boost levels at all. I choose, since the JTR's are plenty capable power wise and they are running on a D-sonic amp so not a power supplied issue either, to boost some of their levels up and then cut the others less to match levels. 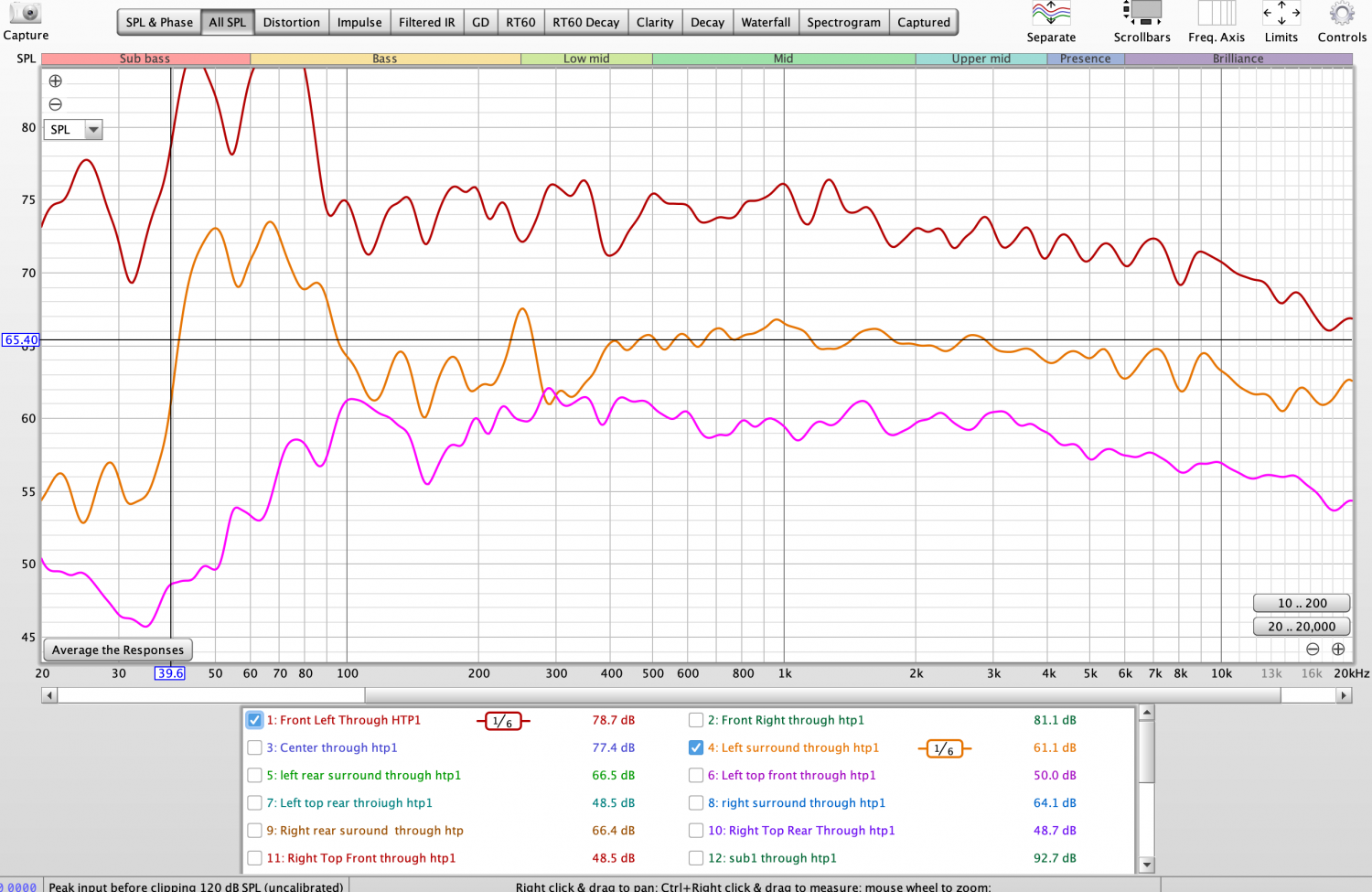 2) Dirac phase was wrong, I forgot to get measurements of this via smaart, but compared to what I got for phase using SMAART, it had the left and right delayed around 2ms difference and mine was a 0.3ms difference. The center was also delayed more than it needed to be in Dirac compared to mine. This was also evident listening to stereo music, the stage was biased heavy left. This could be due to the friend's method in how they took Dirac measurements previous. We just used their previous dirac stuff and didn't re-run dirac. So don't read a whole lot into this. Needs more investigation to determine if something is actually weird with dirac and phase.

Note* We did have a head in vice center image type situation with these JTR 212rt speakers when playing music, but as you can see from screenshots below the phase is very nicely lined up at the MLP. Shouldn't really be an issue for a home theatre, but wouldn't be great for just listening to music, but music doesn't really seem like JTR's main goal. Speakers are toed in to be angled at MLP, so we may play with this to see if we can widen the sweet spot.

This was my phase graph with a 0.3ms difference 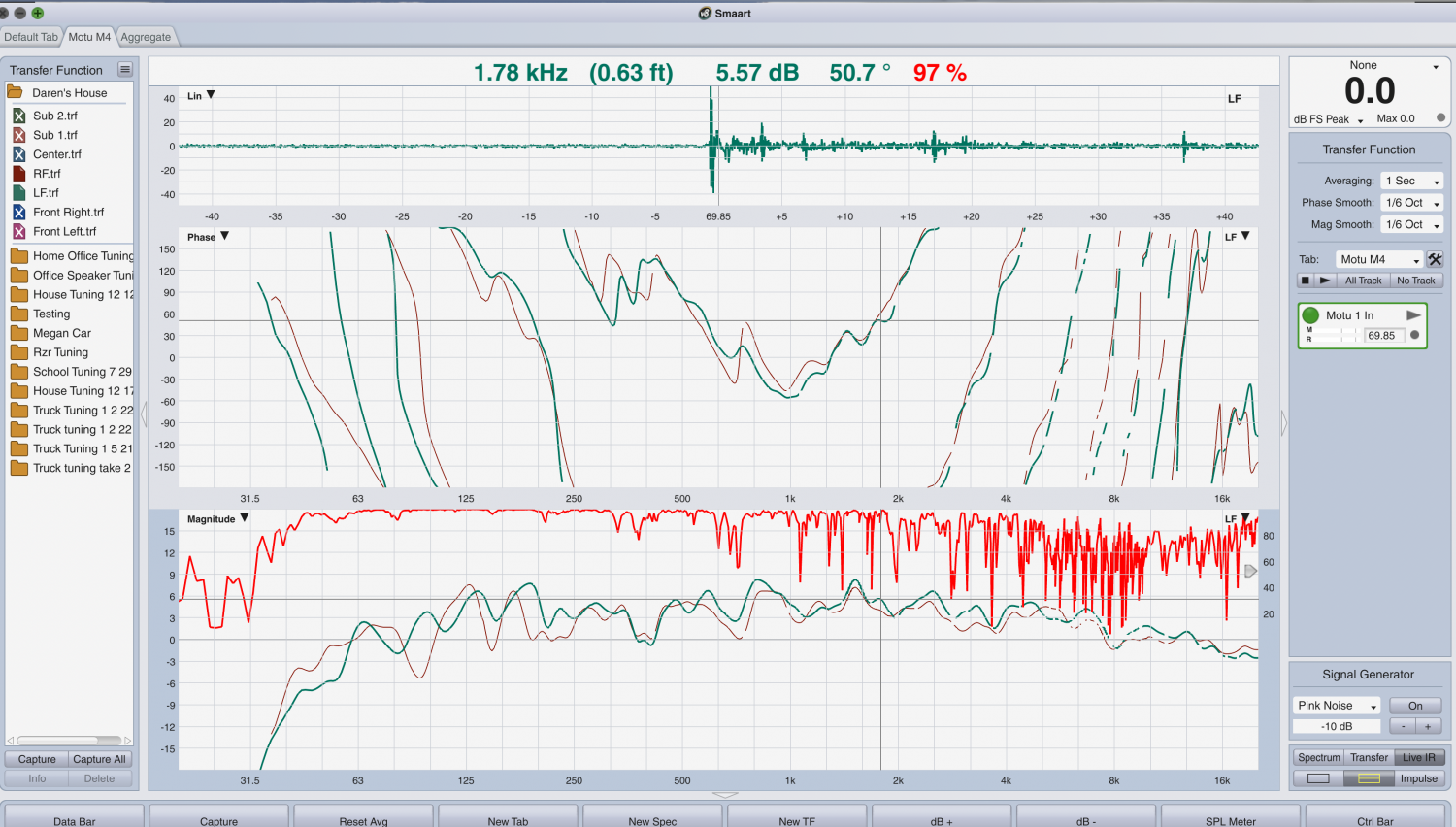 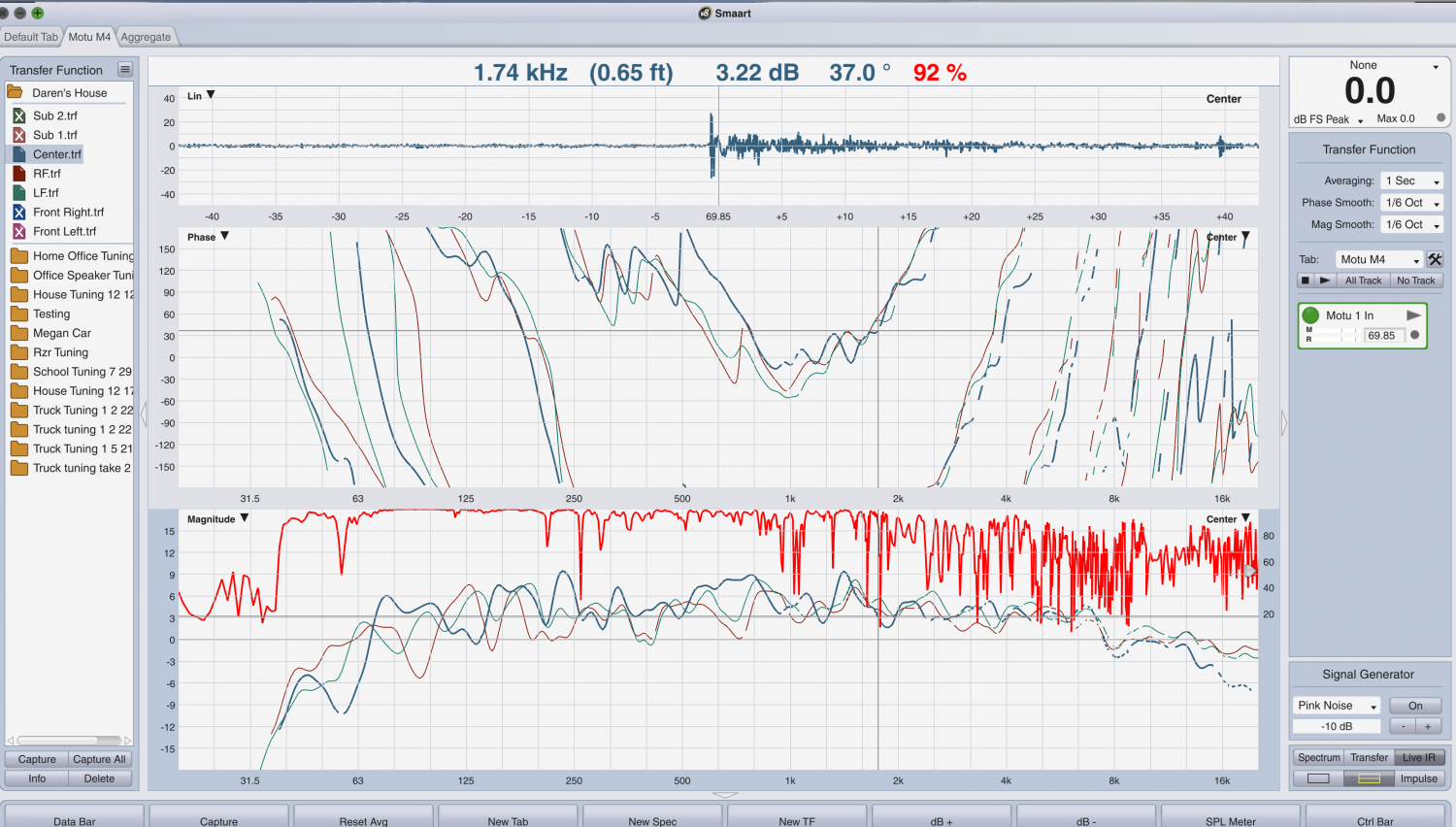 3) The revel C763L speakers are awful. Don't buy them. Clearly issues in all 4 around 2-3000hz range. Not fixable issues too. I, and others, are guessing this is from the MTM design of it since the mids cross to the tweeters around 2000hz according to revel. I was shocked how bad these measured in room. 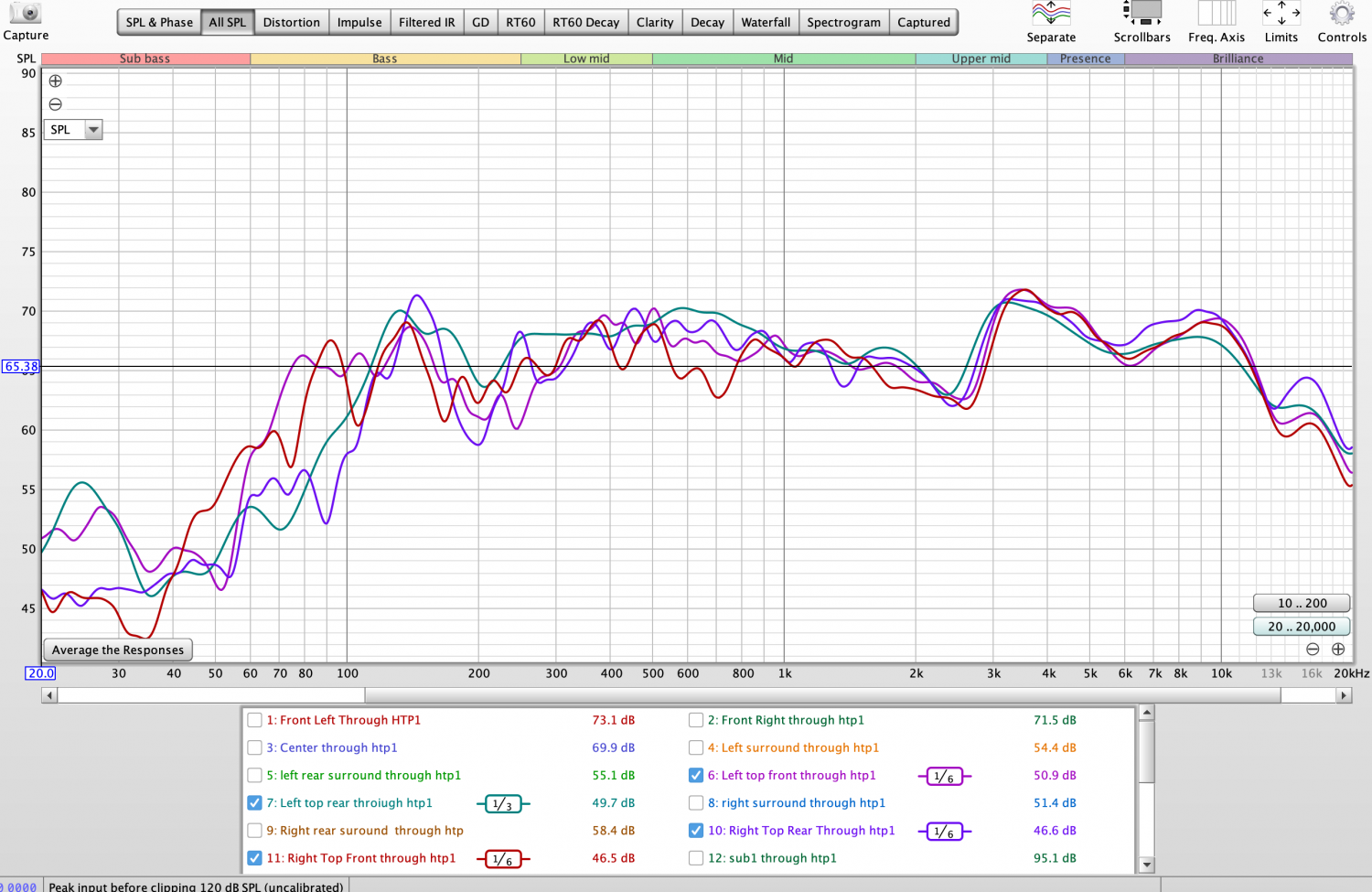 Is the conclusion on the phase being wrong is based on the same microphone location during before and after?
OP

abdo123 said:
Is the conclusion on the phase being wrong is based on the same microphone location during before and after?
Click to expand...

The conclusion is based on what I got for phase results above by measuring at the MLP. With my measurements showing a 0.3ms difference (should be right since both Left and Right speaker are about 14.5ft away). I didn't measure phase with dirac engaged, but it's delays were for left and right were like 1ms and 3ms. So somewhere it added like 2 feet to one of the speakers (I believe right if I remember correctly). Similar with the center. The center is about 13ft away and I got a time delay of about 1.2ms more for the center compared to Left and right when measured via smaart. Dirac had this as a bigger difference too IIRC, might have been less but either way it wasn't right.

Again, I wouldn't read too much into this, as it could have definitley been user error on the original dirac measurements. Maybe when I have more time I will run dirac with the friend and see what we get.
Living Room / Home Theatre: Monolith HTP-1 -> Buckeye 6 channel 502mp and 4 channel 252mp ->PhilHarmonic Audio Speakers 2x BMR Towers (L/R), 1x BMR (center), 3x Mini Monitor (Surrounds/VOG), 4x JBL SP6CII In Ceiling Speakers -- QSC GXD 8 -> Dual Sealed 4 cuft Stereo Integrity HT-18v3

Dirac always adjust for actual incidence of sound (that’s what Dirac can measure anyway) and if the microphone location is not spot on during the measurement no meaningful conclusion can be drawn. It makes a big difference.

My L/R delay was like 0.1ms last time I calibrated, mainly because I didn’t need any delay to begin with.
W

As an interesting test, I did a reverse engineer of the Dirac correction. I have a USB sound card that has an analog mic input. I fed the preamp output into the mic and then did a sweep on REW with the Dirac correction enabled. From their I could see the filtering that Dirac was using. I then used REW to create an EQ that would achieve a flat target which was an inverse EQ of what Dirac created. I then simply reversed the gain settings of each filter (if REW created a gain of +5db, I changed it to -5db). This created a set of filters that mimics the Dirac curve. I then loaded that into my minidsp and got surprisingly good results. Not as good as Dirac, but pretty decent. Since minidsp is limited to 10 filters, I'm going to give Equalizer APO a shot which can support more filters (in my case I need 19 per channel to get a closer match).

Dirac is still the way to go, but it was a fun little experiment.
KEF LS50 Meta, Topping E50, Topping PA5, Denon x3700h, SVS SB-2000, DIRAC Live Standalone w/DBLC
You must log in or register to reply here.