Dirac sounds really bad - am I doing something wrong?

abdo123 said:
I'm a bit busy today so i can't reply to all the points you mentioned right now but i suggest you give Dirac a sensible try first (limit magnitude correction to transition frequency, only measure what needs to be measured, adjust target curve if you run out of headroom) before we continue this discussion
Click to expand...

I have tried all those things many times.
I think the Audioholics video about a different "magic box" DSP highlights the issues around proprietary filter design.
In the Audioholics video, the RBH guy claims, and this is a paraphrase, "We found a new place to measure the DSP autocall and WOW, the results are amazing, but we are not going to tell you our secret measuring technique."

I am not sure what DSP they have but if its like Dirac, hidden filten design, then they are 2 times ridiculous. they are saying
1. Hidden filter design
2. Hidden "secret" measuring technique

I am heading to a studio for a mega church today, My job is to bring the tracks and score sheet to subjectively rate the system based on a scoresheet I have spend much time crafting and changing. I have 1 day today to get it done today with my team, we can not really on hidden algorithms or as RBH claims, "non-standard measurement positions" that bring "magical" results.

I have found that 1 position measurements work best in my room set up.

I'm the one who started this subject, and now I fiiiiiiinally respond.
Sorry for the very long wait. There was work, exhaustion from it, a two week holiday, etc. but actually also some more relevant things:
First I bought two new computers, so I wanted to try Dirac on one of them to see if that changed anything, to eliminate the possibility that my computer had screwed something up. Dirac let me have a new trial license, so I could see that my computer hadn't screwed anything up because the result was the same on my new computer.

So, then I tried tweaking the curve. Thanks for the various curves you guys sent me. I tried them all, didn't really like them, and then I also tried letting Dirac only adjust anything above 140 Hz, or only letting it adjust anything under 1 kHz and so on. Although I liked some of it more than others, none of it made music pleasurable to listen to.

HOWEVER ... in the end I finally managed to tweak the curve in a way that made me like it quite a lot, so something hadn't gone wrong after all. F1shb0n3 asked if I used a Mac, but no, it was the newest Dirac version on a Windows computer.
I used the B&K curve as my basis, and then ended up with this curve: 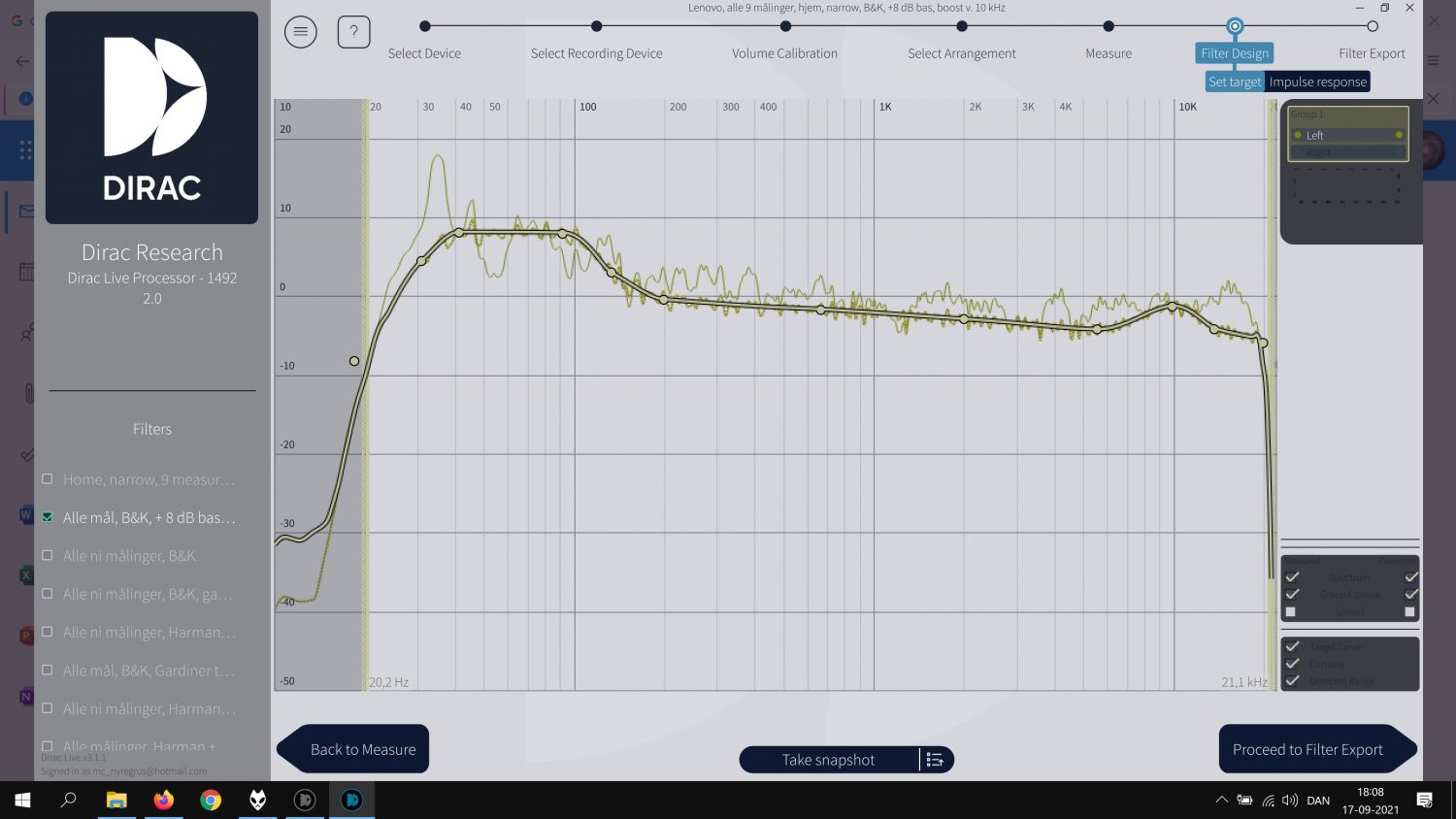 However, in the picture the bass is boosted by 8 dB. I ended up preferring it boosted by 6 dB. I might end up tweaking the curve a bit further, but that was how far I made it before my trial license ran out. Without the top end boost I didn't like the sound very much.
Comparing this curve to the non-adjusted signal was a bit difficult due to the volume level differences, but based on what I managed to compare, I would say that with this curve most music sounded better with room EQ than without. Some music did sound better without the room EQ, but it was a minority.
This is of course a personal preference, I know.
I would be happy to share this curve if anyone wants to try it.
One thing though: I usually switched off delay and gain compensation, as it pushed the imaging way too much to one side. Perhaps adjusting the speaker position will change this.

As for some of the other issues raised in this thread:
Yes, I have some massive peaks around 30 Hz. On one side of my room there's a glass door to the backyard. This, and especially the part above the door itself, vibrates around 30 Hz. On the other side of the room there's a built-in wardrobe under a staircase, as well as a door to a small bathroom diagnoally across from it. This also vibrates around 30 Hz.
However, I would say that it's not such a big issue as it might seem, because most music has very little, if any, energy in that frequency area. Some mastering engineers even cut everything off below 30 Hz. However, when I have listened to certain music with too much energy in that frequency band (e.g. the soundtracks to "Blade Runner 2049", "The Gentlemen" and "Wrath of Man") the bass does rattle both the glass door, the regular door, and the wardrobe, and it becomes unpleasant to be in the room at certain volume levels. This is, however, not a problem with most music.
For this reason I also lowered the curve shown above around 30 Hz.
I did, however, boost the bass at higher frequencies, because if you look at the first picture in my original post, then at the listening position (not so much in the other measuring positions) there's a massive null around 100 Hz, which is were most songs peak.

Raindance asked about my room layout and speaker placement. My speakers are not in the corners per se. Here's one of them with a bass trap behind it. The distance to the back wall is 1 meter. Before installing the bass traps I had the speakers closer to the wall, and I experimented a lot with moving them closer to or further away from both the back wall and the side wall, and at a certain distance I could no longer hear any difference if I pulled them further away. 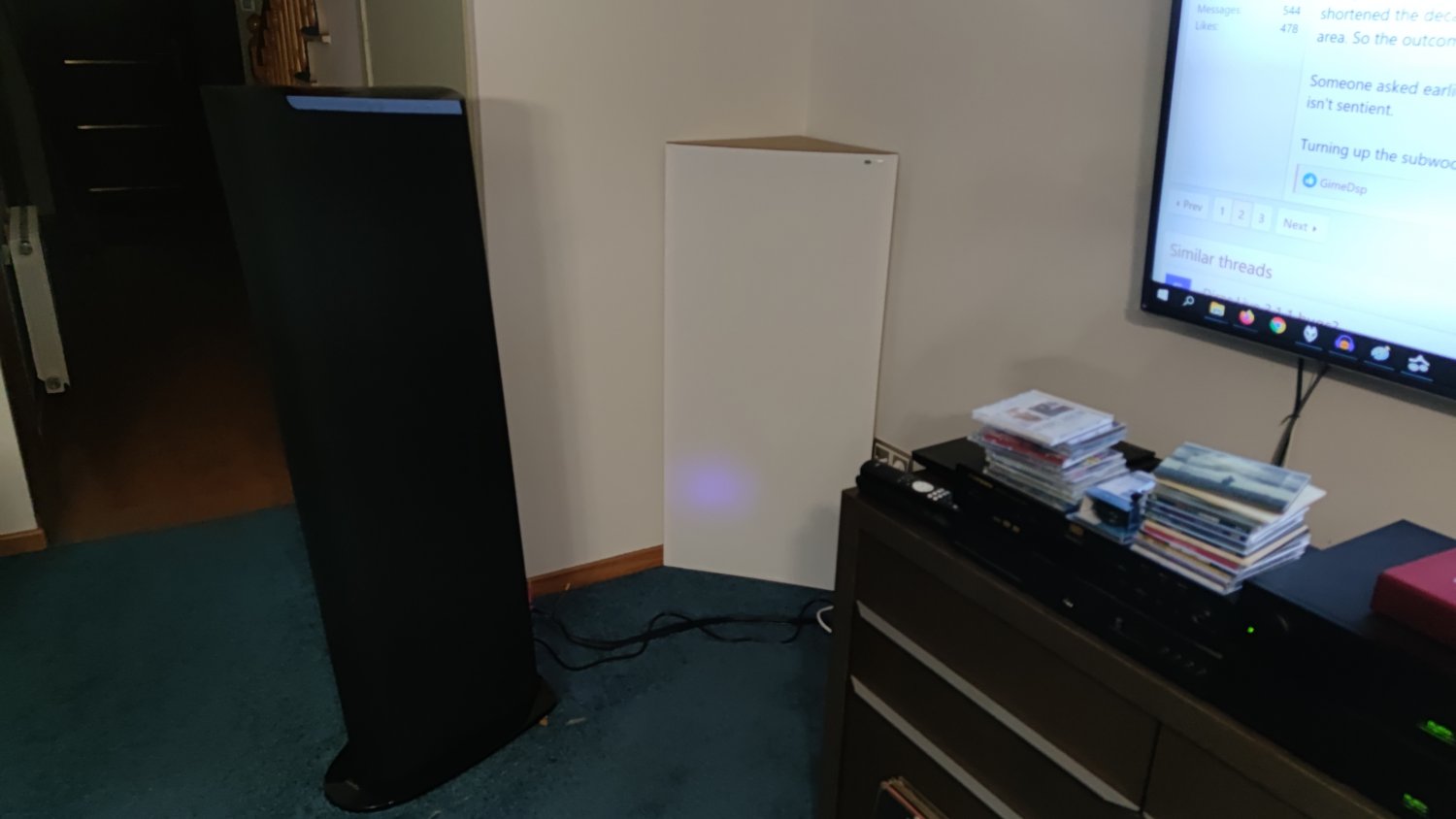 Here's the room from the listening position: 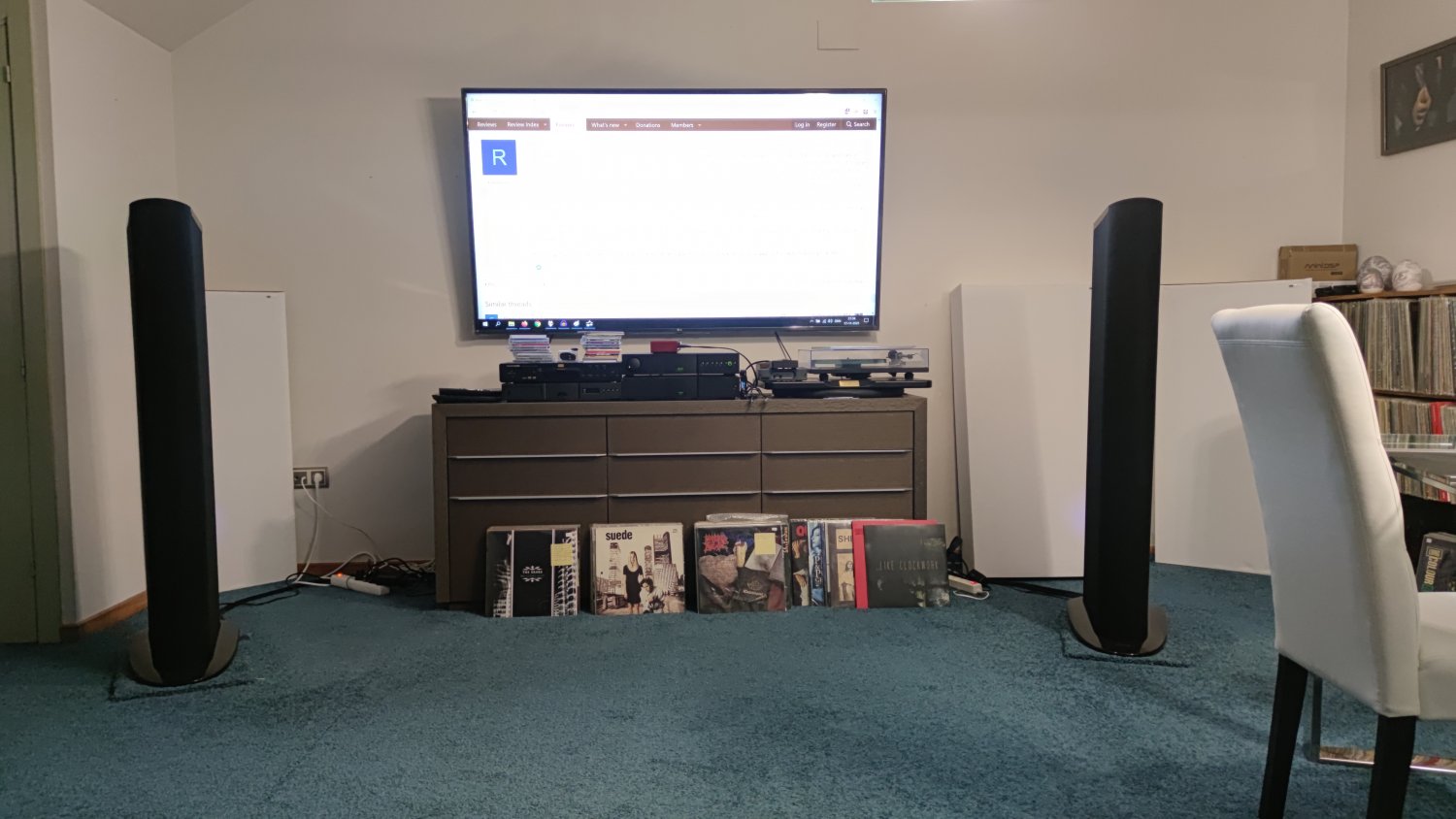 As you might be able to see, behind the right speaker there's a bass trap + one in the corner. Gik Acoustics, who sold me these panels, said the other speaker could do with one trap due to the placement. On the side with two traps, the triangular one really should be in the corner, but I haven't moved the record shelf yet.
After installing the bass traps I pulled the speakers further away from the wall. I also have acoustic panels on the side walls and behind the listening position. The acoustic treatment really has taken away quite a bit of reverberation and shrillness.
So, now I'm happy with Dirac, and I will buy hardware for it.
Last edited: Nov 17, 2021
T

It seems you just prefer or are accustomed to a more "hyped" signature. If you like it and you're happy, you're done.
OP

Perhaps someone with more experience could explain why.
OP

Perhaps someone with more experience could explain why.
Click to expand...

I had to boost around 10 kHz as well before it really sounded right to me.
I do like bass though, but there are definitely limits, like in the soundtracks mentioned, where it simply isn't pleasant anymore. Listen to Hans Zimmer's "Sea Wall" (from "Blade Runner 2049"), and you'll see what I mean. That soundtrack is mostly torture, rather than music, and I mainly use it for demonstration purposes ("hear my house falling apart").
Last edited: Nov 18, 2021
You must log in or register to reply here.

D
My DRC Setup - Am I Doing This Right? + Alternatives

P
Dirac Live 3 vs. Manual Effort with my MCLA
2

Can I do room correction EQ manually with Neumann KH 80?