This is a review and detailed measurements of the Denon AVR-X3800H 9.4 Home Theater Audio/Video Receiver. It was kindly drop shipped to me by a member and costs US $1,699. 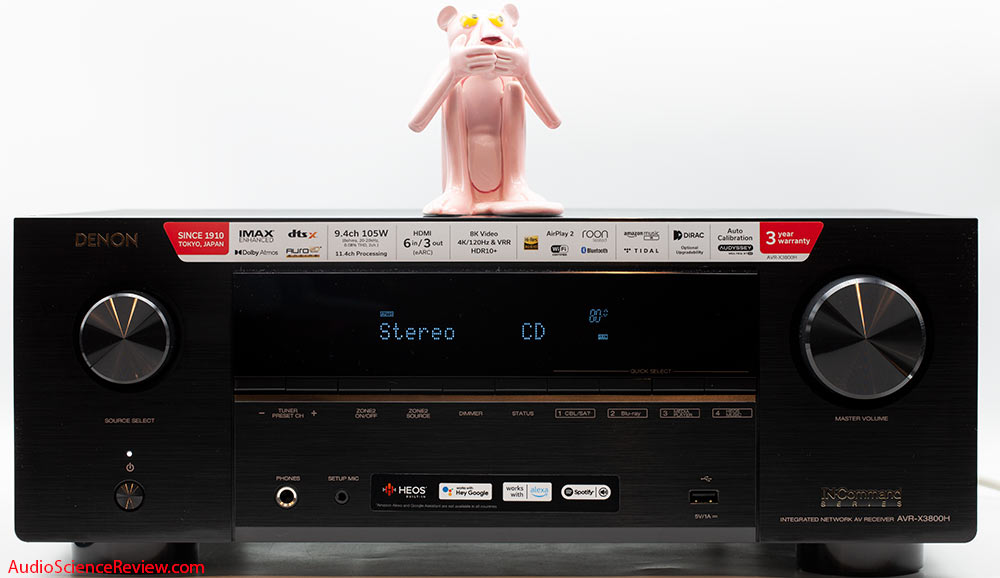 Not much to say about the look of the unit as it is pretty much similar/same as last generations. Here is the back panel:

I had one operational problem with the unit where the Setup button would not bring up the menus anymore. A power cycle fixed it. I was happy to see solid extruded aluminum heatsink. Despite that, the top front of the of the unit (above the heatsink) got quite hot to the touch. I highly recommend ample airflow in that area. As usual, there is a fan there but it would not come on to cool the unit.

I grabbed a preliminary set of measurements from the DAC section of the 3800H and ran it by the company. Within typical margin of error, the measurements were the same as company's own.

Denon AVR-X3800H DAC Measurements
The DAC measurements and usage are made better by a global "preamplifier" mode which shuts down the amps and keeps them from overloading the unit during testing. I started my tests using Toslink optical to remove any possibility of ground loops: 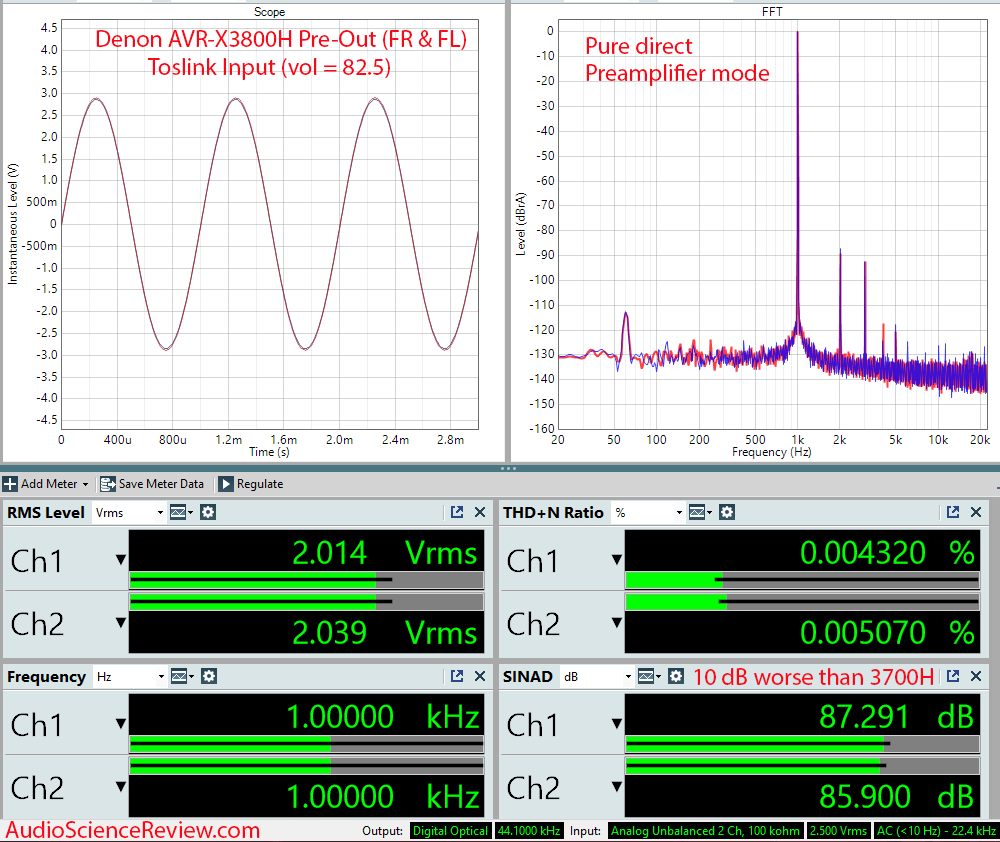 I was fair bit disappointed to see the high distortion spikes which caused the unit to underperform the AVR-X3700H by some 10 dB. This naturally knocks down the positioning of the unit by good bit in our SINAD ranking: 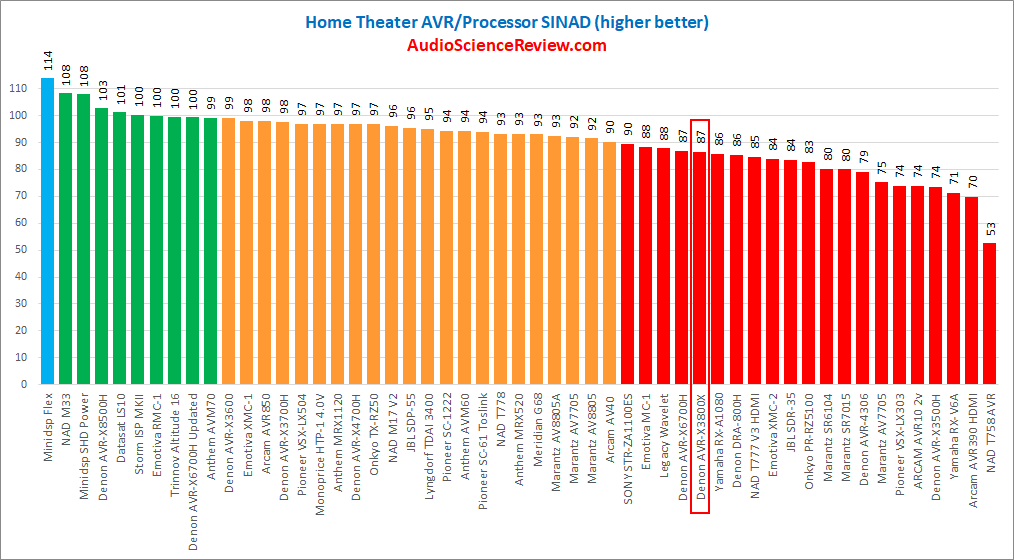 The culprit seems to be the optimal output shifting fair bit lower in voltage: 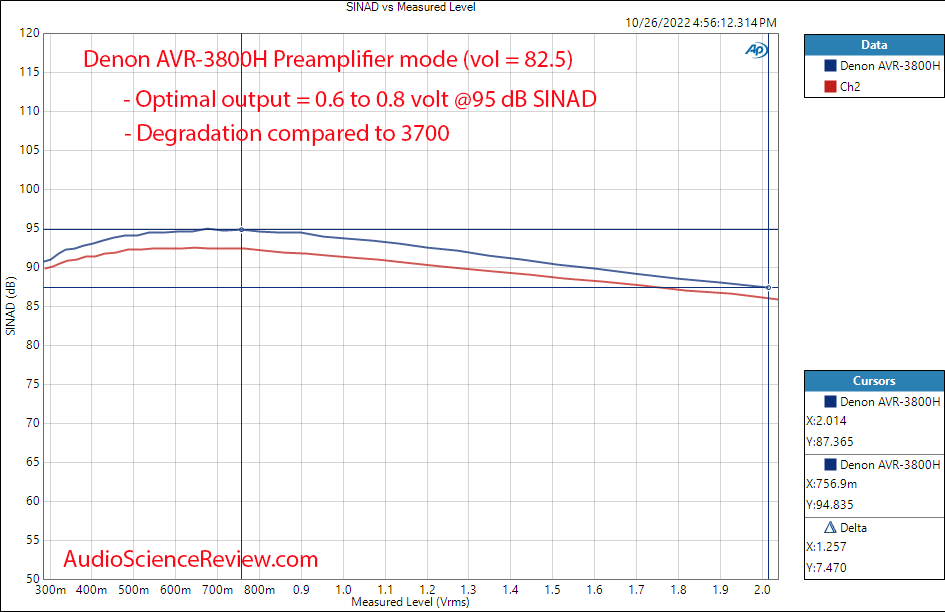 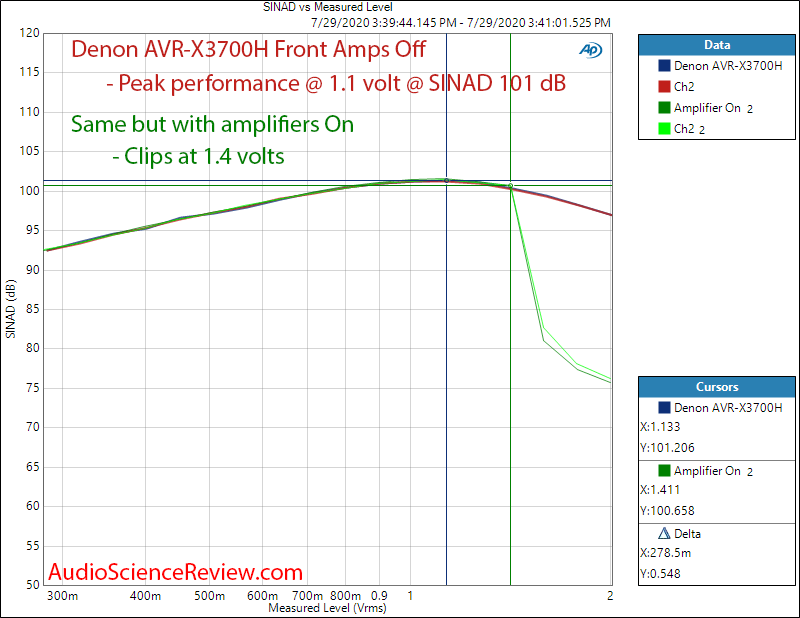 So fairly large degradation here. Company explanation was that this was good enough for "99%" of the external amps out there. Be that as it may, it still doesn't explain the drop in performance at the peak level (101 dB for 3700 vs 95 for 3800).

Connecting HDMI causes a rise in noise floor but SINAD didn't change since it is dominated by distortion: 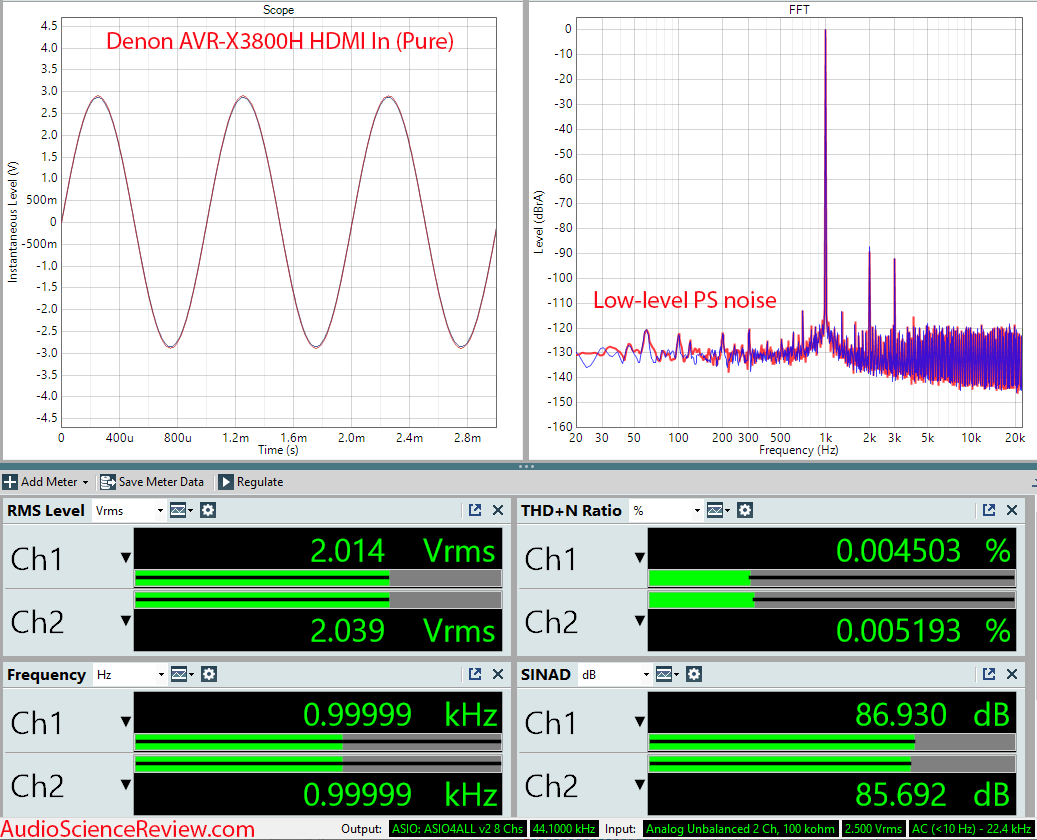 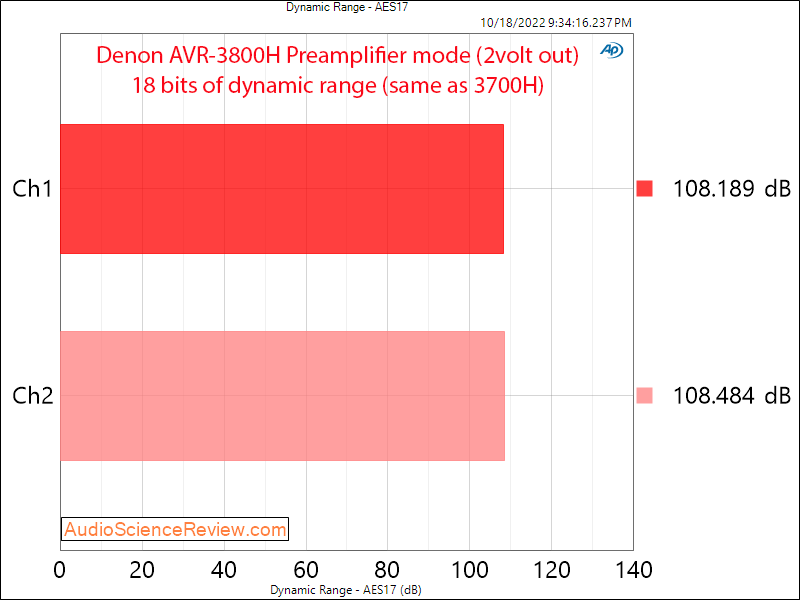 IMD is naturally worse due to earlier saturation: 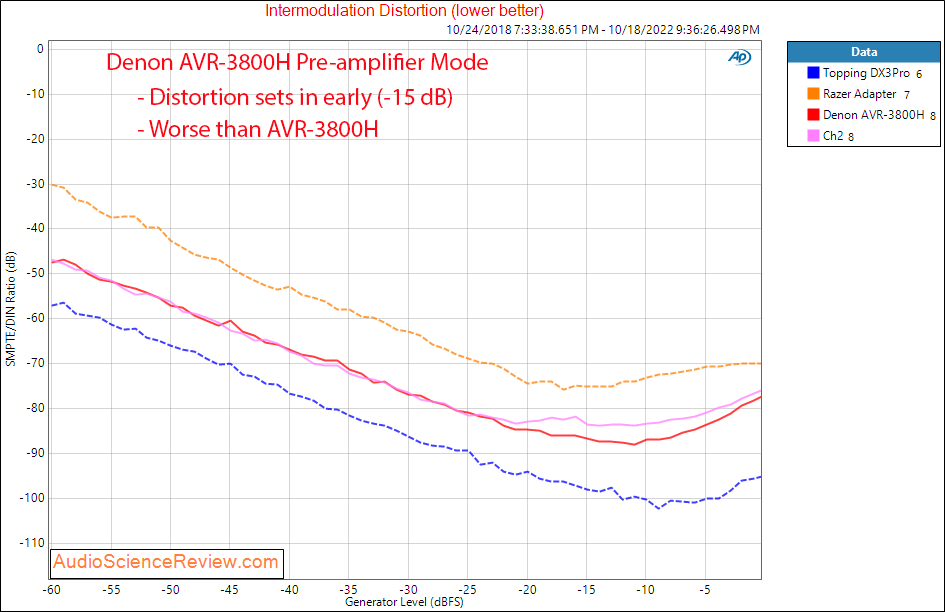 Linearity has suffered a bit: 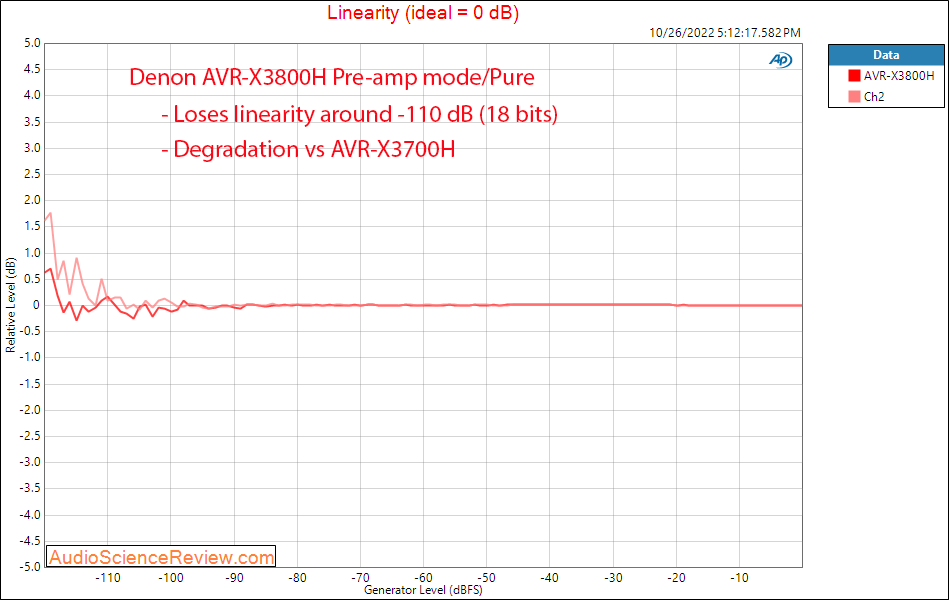 Multitone shows the degradation we would expect: 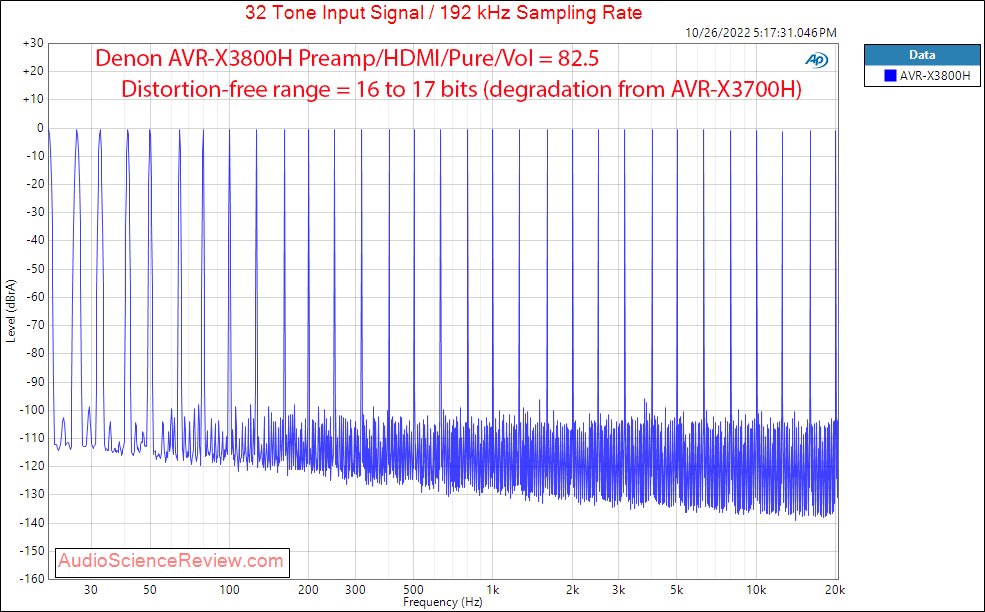 Due to different DAC chip used (?), the filter performance is a bit worse as well: 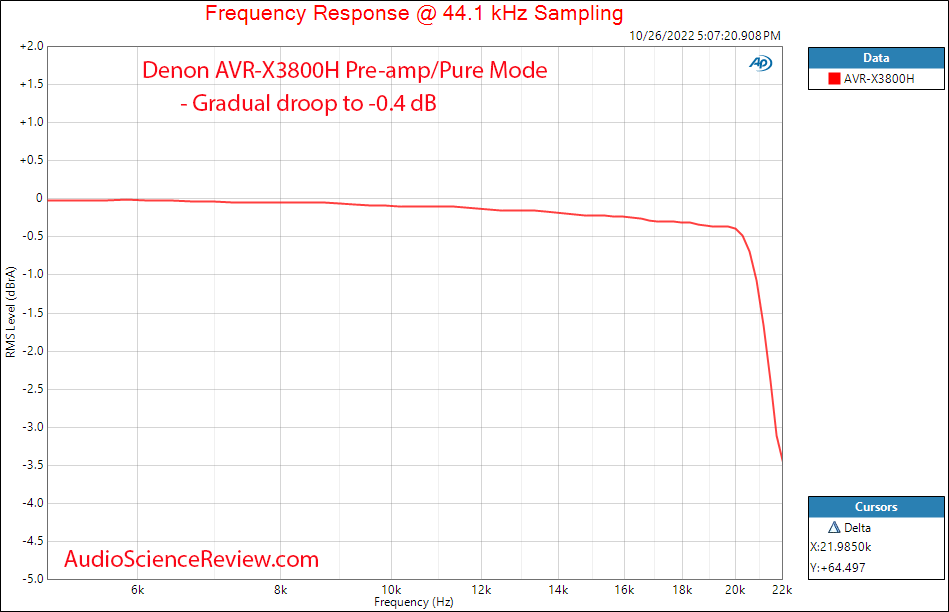 This naturally increases the noise+distortion in our wideband measurements: 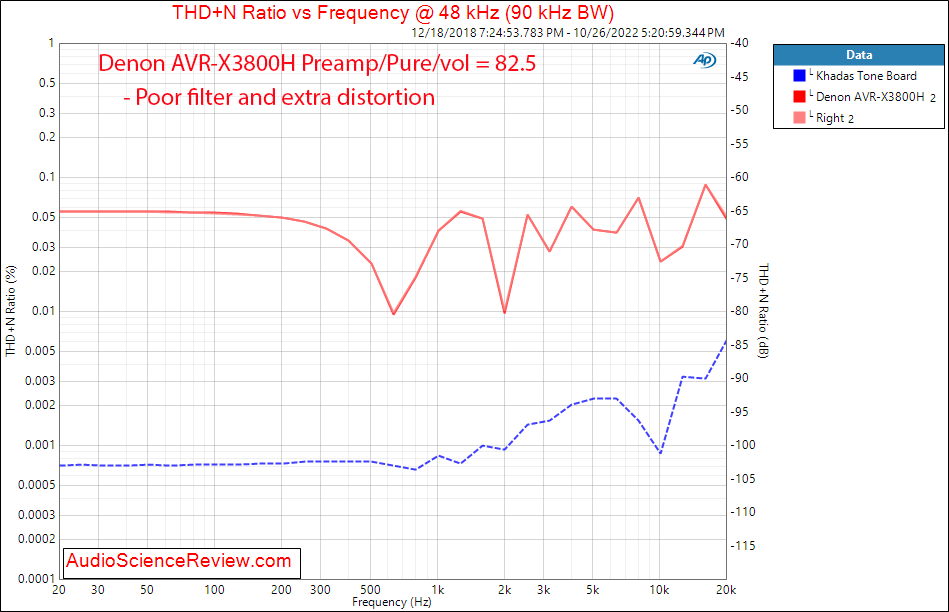 Jitter is bad but so was the last generation: 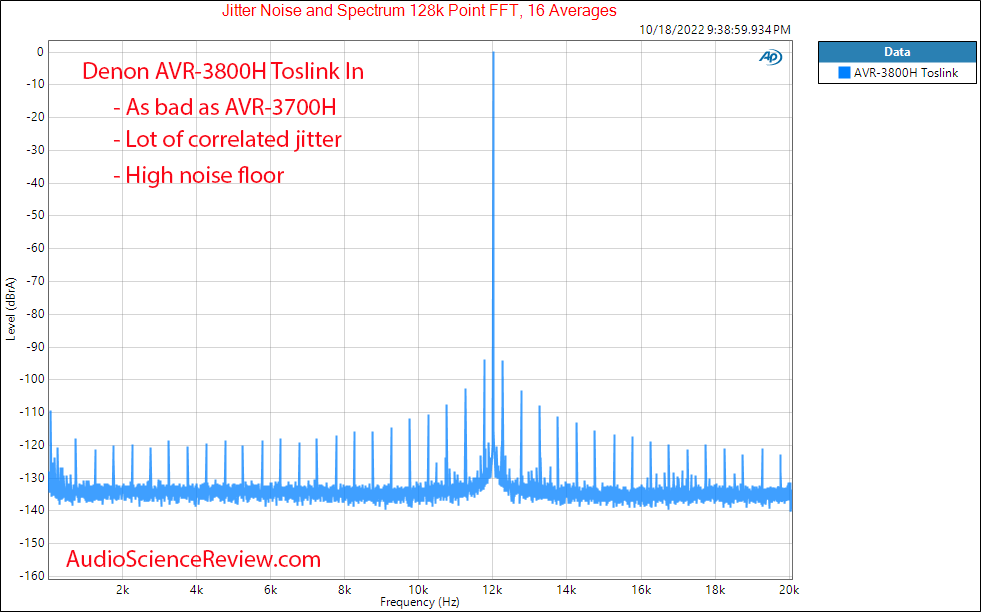 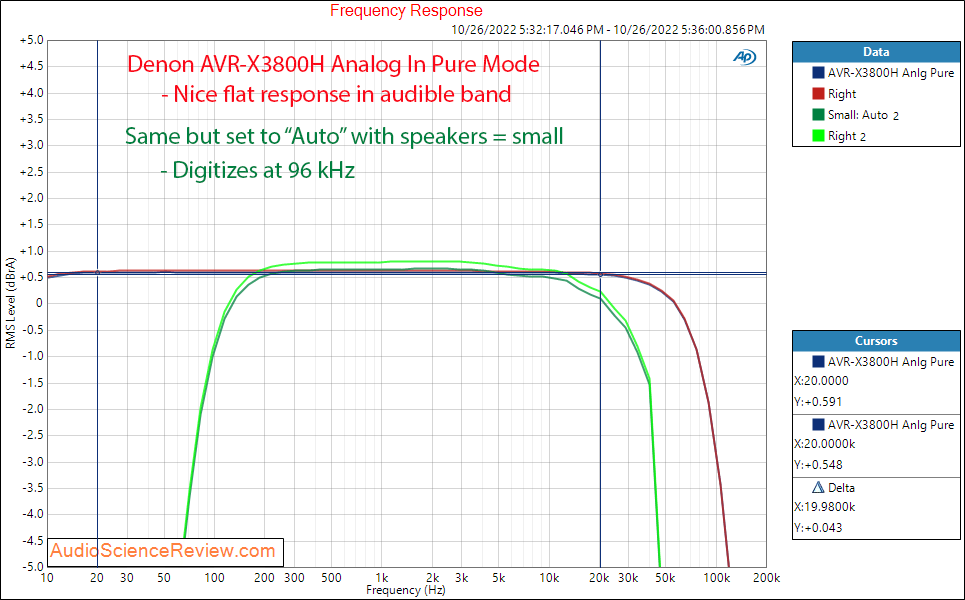 This is good results.

Crosstalk is very similar to last generation and in need of some improvement: 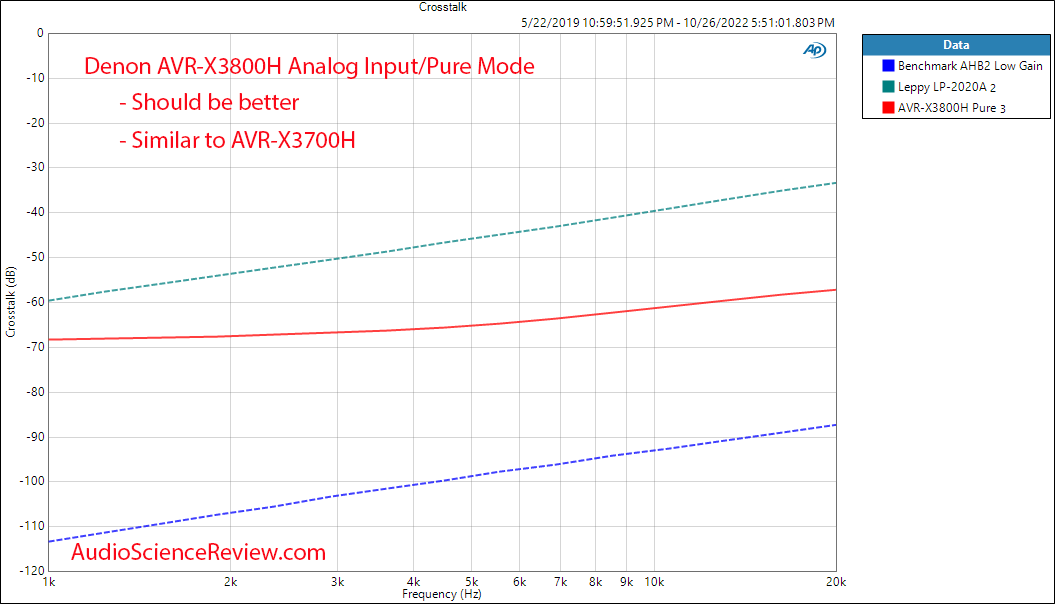 Dashboard performance is a bit worse than last generation but not as bad as the hit in the DAC section: 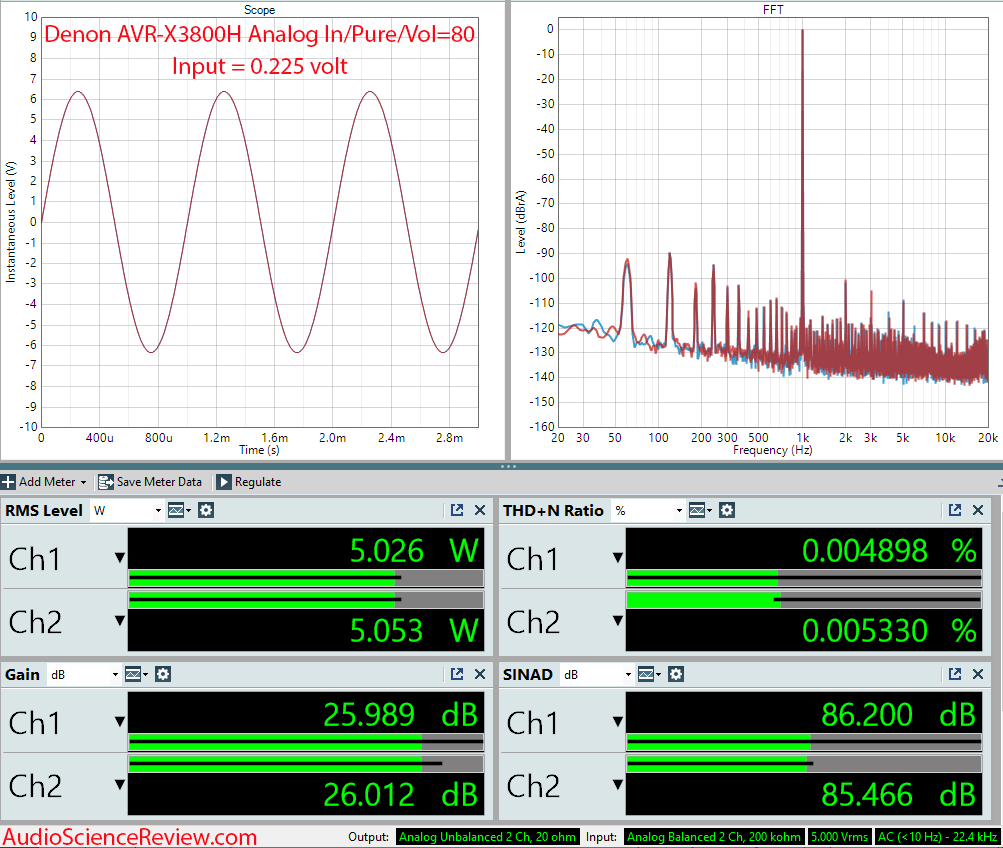 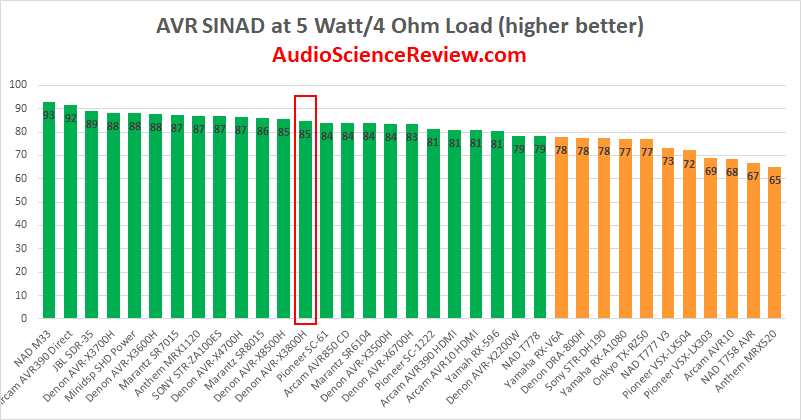 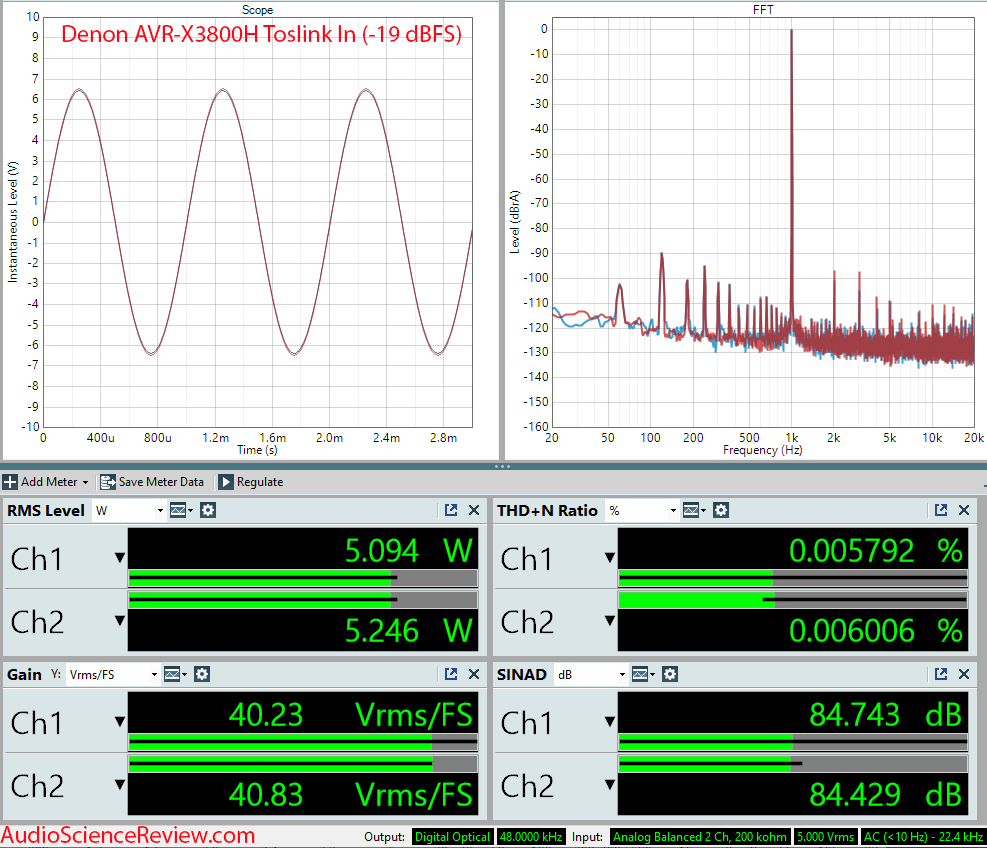 Fortunately noise performance is the same as before:

Multitone has power supply noise in lower frequencies and rising distortion in highs: 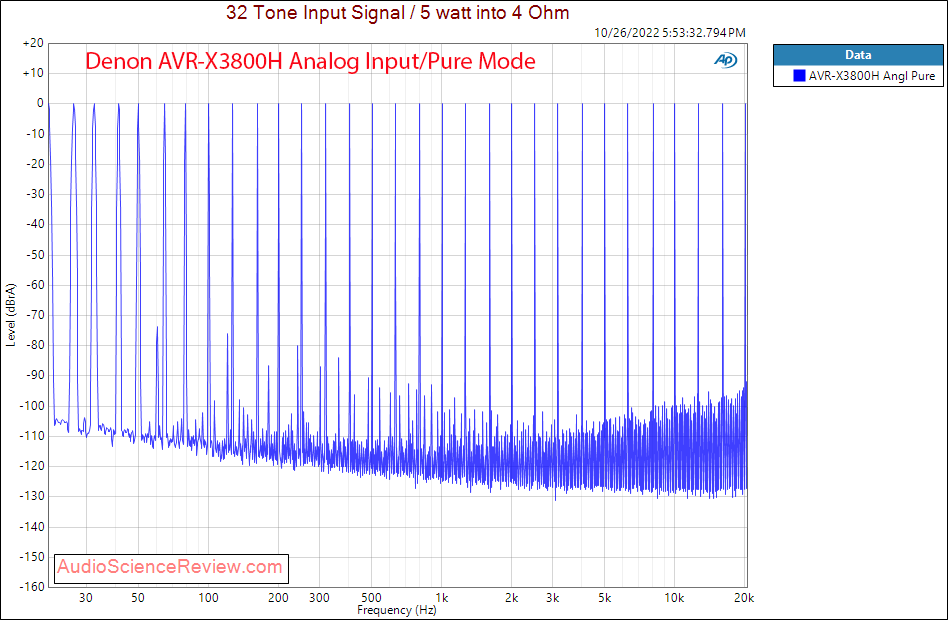 Rest of the measurements are essentially identical to last generation AVR: 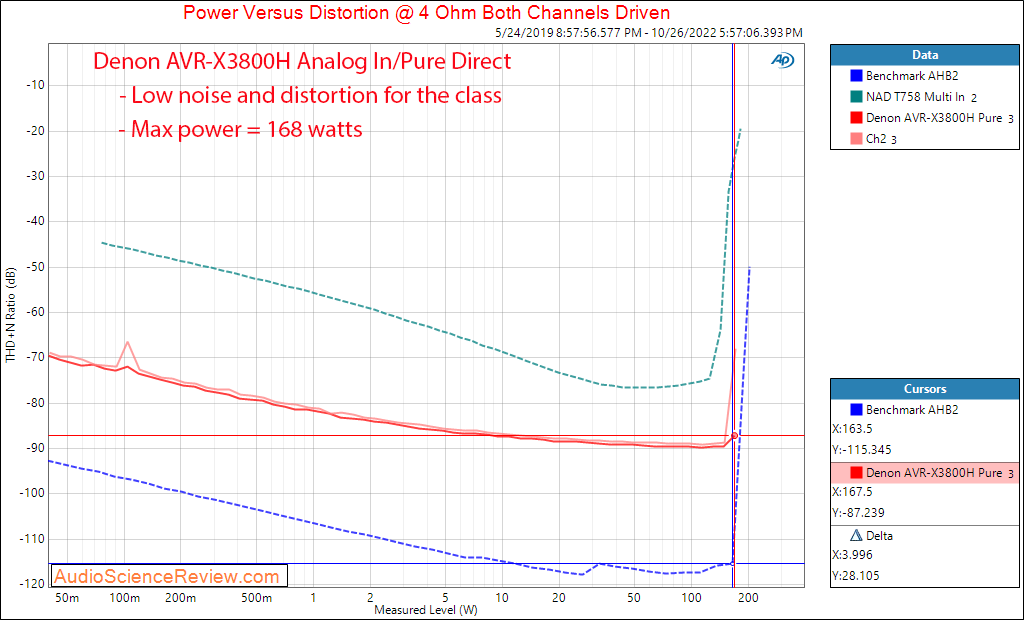 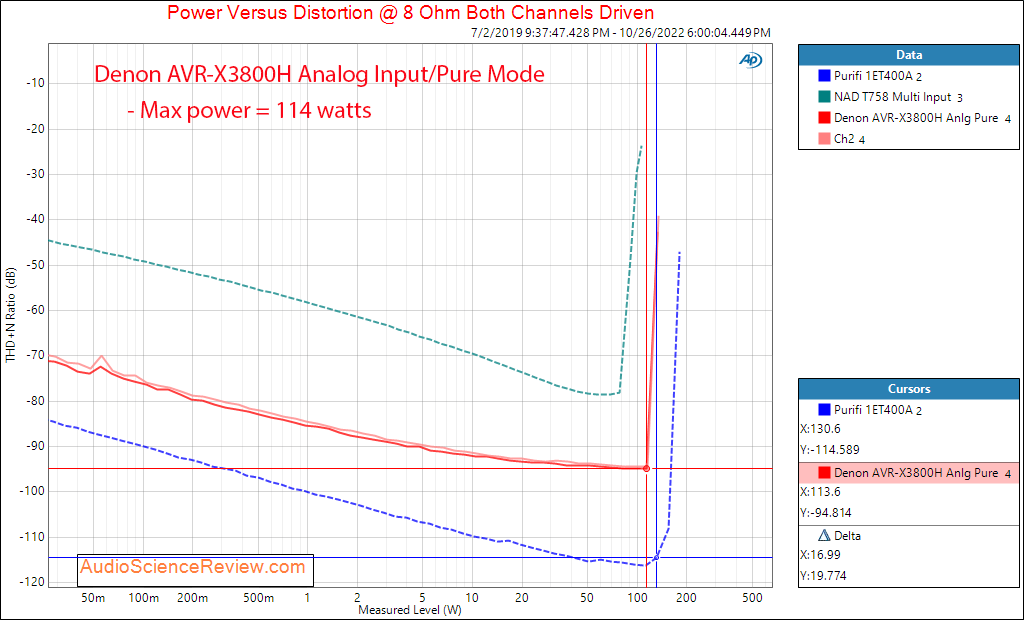 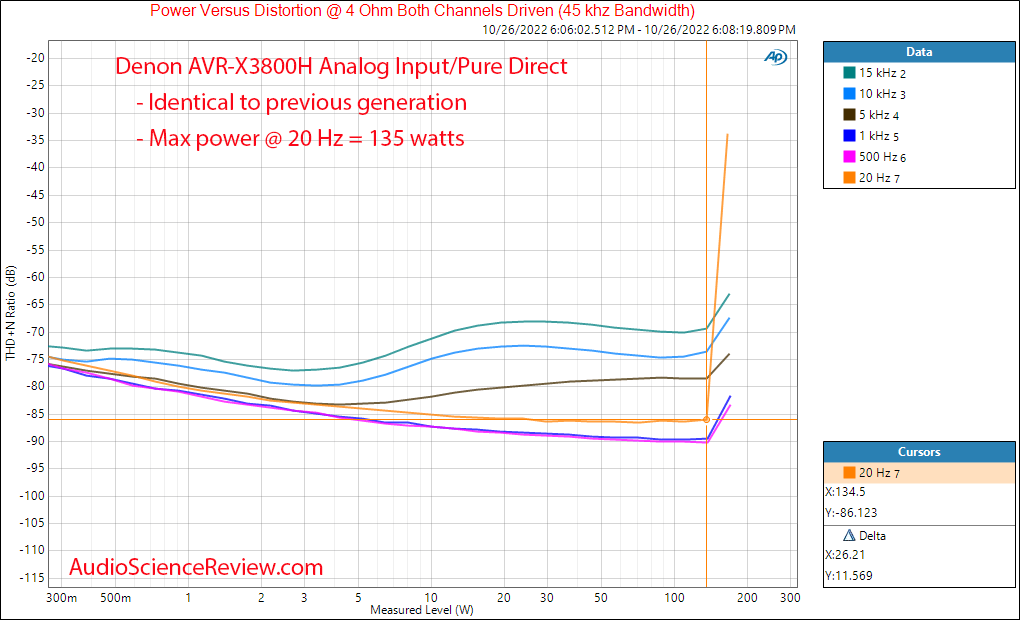 All in all, the amplifier is as performant as before.

Conclusions
I had high hopes going into this review thinking the company had seen the advantage its superior objective measurements in the past and would try to capitalize on them. Sadly, the reverse seems to be true with the DAC section taking a large step backward. Considering that the 3800 costs $500 more than 3700H, this is very surprising to me. Yes, inflation has a lot to do with that but surely the eye needed to be focused on making sure they at least met the same level of performance as last generation.

The good news is that the amplifier seems to be same design as last generation and has only taken a small hit.

Denon had been my "goto" recommendation for AVRs and even AVPs. When anyone asked me about either, I would just say "get a Denon AVR." While subjectively the performance of this new generation may be similar, I can't accept the regression in objective measured performance.

It is with much sadness that I cannot recommend the Denon AVR-X3800H.

Thanks Amir for digging into the reasons for the regression(s).

I can almost hear the sighs of disappointment echoing around the globe...

And this got a 5 star review on What HiFi

"Streaming SBTRKT’s Trials Of The Past, the AVC-X3800H delivers a surprisingly nuanced musical performance with an assured attack at the start of each synth note and the envelope of each reverb tail given space to breathe. The hefty bass is solidly controlled, while at the top end of the spectrum, the shakers are nicely defined and spread wide"

Definitely a bit disappointing compared to previously measured models for sure. 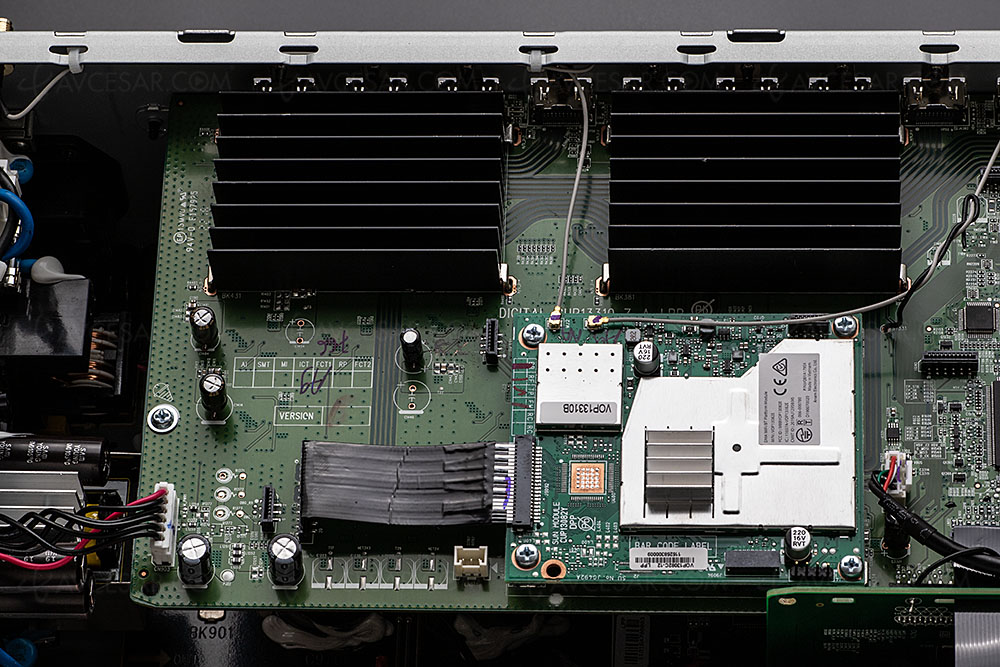 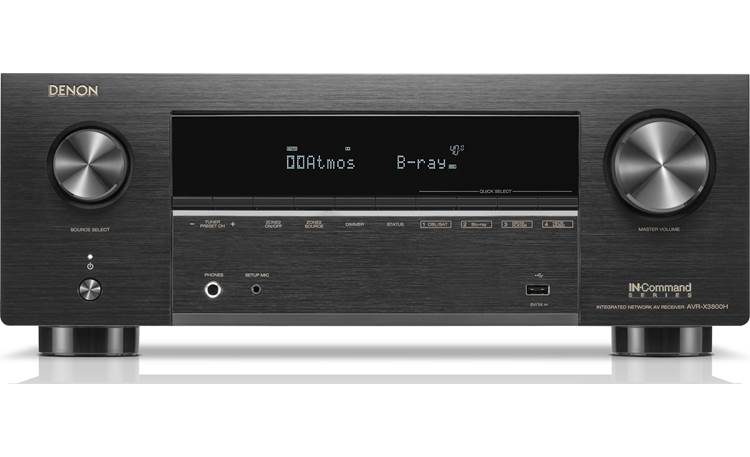 Very good of you @amirm to squeeze this review in while dealing with the house, cheers.

AVRs are in need of extensive redesign of pre- and amplifier sections. Their performance it is still 1980’s consumer’s electronics (and their looks too). It is also truly indicative of poor product design to market a new AVR with worse performance than the one before.

$ 1,700 is a decent chunk of money to be careless about: it buys you a SOTA amp and DAC/Preamp with some cash left, albeit not a multichannel one. I soldier by with my 2.1 modest AV system as I rather wait for improved specs, review, aesthetic and price.

Thank you, @amirm .
Absolute bummer with a year off that they couldn’t bring more to the party.
Will be curious to see if units higher up the food chain will perform better.

Thanks for taking the time to do this.
G

@amirm
Just noticed that you have the broken X6700H shown in the chart. Could this be another crazy bad capacitor scenario?

Really curious to know how the 3700 with the new replacement DAC would stack up. Given this poor showing one has to be sceptical.
M

Great Review Amir, Thanks
I had high expectations but what a disappointment, oh well, I will keep enjoying my X3700H
M

@amirm do you have other Denon AVRs on hand to test?

AndreaT said:
$ 1,700 is a decent chunk of money to be careless about: it buys you a SOTA amp and DAC/Preamp with some cash left, albeit not a multichannel one.
Click to expand...

So it buys you something entirely different? Ok..

GXAlan said:
@amirm
Just noticed that you have the broken X6700H shown in the chart. Could this be another crazy bad capacitor scenario?
Click to expand...

As I noted, I ran the measurements by Denon so no bad cap this time.
Amir
Founder, Audio Science Review
Founder, Madrona Digital
Review Thread Rules
My Technical Background
My YouTube Channel
OP

Moravid said:
@amirm do you have other Denon AVRs on hand to test?
Click to expand...

Well, at least they finally removed the component video inputs and output.

I've written on this before, but these products are just too complex for a company to truly test and optimize the designs when they have nearly a dozen new models coming out each year. They have to be taking shortcuts in testing and optimizing design and layout.
D

I ordered a 4700 just before seeing this. I'm not sure it measures much better, however. I hope so.
Strange -- the older and more decrepit my ears get, the greater my desire to buy newer and better "audiophile" gear!