I know you want to keep them as "Informal Listening Tests", I have a few requests about them regardless:

Cahudson42 said:
@RayDunzl Do we also need a simultaneous multi-tone for IMD?
Click to expand...
I suppose we are free to put anything we want on the Wish List.

IMD and THD are related.

FWIW: I have the same philosophy on this subject that I espouse under circumstances when one is provided with free food.

One should never complain about food when it is free! I like to say.
In terms of measuring loudspeakers, it is a safe bet that (you + Klippel) know more than I. Far more than I.

EDIT: Oh, I should acknowledge that I do realize it ain't actually free! But I hope you all catch my drift. This is a service being offered to a community; it's kind of hard to complain!
Last edited: Jan 28, 2020
A

My complaint is mainly that people focus on too many irrelevant things. The whole purpose of the spinorama is to present all important information we know matters in a simple and easy to read graph.

There's alot of noise about possible differences in the graph if we measure with a different reference axis, but I think that's 98% irrelevant. The listening window averaging will average out most of any possible difference, and if not, there's serious directivity issues somewhere that is of a bigger concern.

We want to know if a speaker has flat and smooth frequency/directivity response and we also want to know if there's wide or limited dispersion. This is actually all we need to predict if a speaker will sound good or not. Achieving the absolute best possible graph for individual speakers is a waste of time because;

1. It won't change the neutrality of a speaker.
2. Amir is not working for speaker manufacturers and have no obligations to them to present data in the most flattering way possible.

All other data is pure bonus, and while I greatly appreciate any relevant data that appeals to my inner nerd, it's still incredibly irrelevant relative to Amir's stated goal of separating the good from the bad in a quest to help consumers make informed decisions.

The amount of criticism we've seen over the last few days would suggest that many fail to understand the stated goal with these measurements. It also suggests that not enough people understand the difference between what's important and what's merely interesting.

I understand Amir's frustration because the criticism isn't very constructive in the broader scheme of things and it's certainly not proportional to whatever little mistakes that could have been made.

@amirm To paraphrase the Norwegian Prime minister; "I wouldn't have used those words, but.."

...I would have told them to fuck off. But I thank you for being far more patient than I could have been. Keep on focusing on the important matters.
O

dshreter said:
Given many of the speakers will be borrowed, stress tests may also be less feasible.
Click to expand...
I was thinking of sending in some Mini Maggies and am mildly concerned at the casual way 100db tests are being suggested. Then again, I remember reports of them being driven till the clip lights flashed on Bryston 7Bs and/or 28Bs. Just how big are Amir's testing amps?

RayDunzl said:
I should think this is a fundamental aspect of speaker design, to omit it doesn't make sense to me, at least, I find it to be important to me.
Click to expand...
Present it in one plot: 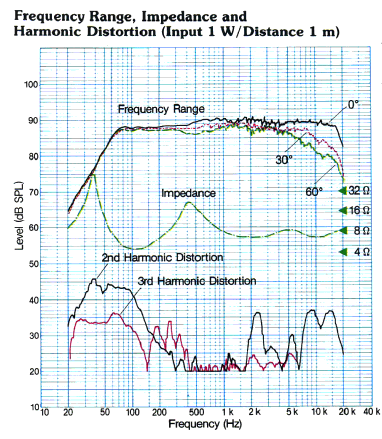 Was @90dB as the speaker was a [email protected] sensitivity at 1M.
Ricky Roma: I subscribe to the law of contrary public opinion... If everyone thinks one thing, then I say, bet the other way...

sergeauckland said:
Yes, compression would be a good test. Good 'speakers don't do more that 1dB or so at 100dB SPL, but I have no idea how smaller 'speakers perform. I'd would guess that some, like the LS3/5a won't even get to 100dB, at least not at 2m.
S
Click to expand...
This would be really cool.

This is a measurement you never see elsewhere. It would be a coup of sorts for ASR!

I think power compression is a major factor in listening enjoyment, right? Probably much moreso than THD to a point. I could be wrong. If anybody can point me to resources on it I'd love to learn more. It's a little hard to Google for because it's hard to separate from results relating to other forms of compression (lossy data compression via mp3, etc)

Great thread! This chaos will eventually lead to a set of relevant measurements!

RayDunzl said:
Please show an example, assuming you can pull one right out of already saved results.
Click to expand...
See the LS50 review: https://www.audiosciencereview.com/forum/index.php?threads/kef-ls50-bookshelf-speaker-review.11144/

Do we have a measurement of the Klippel's testing amplifier?
Click to expand...
I don't use their amplifier (it is too low power made for driver testing). The one I am using is one that I have reviewed before (Behringer A500): https://www.audiosciencereview.com/...easurements-of-behringer-a500-amplifier.5070/
Amir
Founder, Audio Science Review
Founder, Madrona Digital
Contributing Editor, Widescreen Review Magazine
Click for My Technical Background
Master List of Audio Reviews

RayDunzl said:
It might be interesting to see if speakers with similar THD mange to create substantially different IMD.
Click to expand...
So far I am running into a roadblock that IMD tests requires a license to purchase them!
Amir
Founder, Audio Science Review
Founder, Madrona Digital
Contributing Editor, Widescreen Review Magazine
Click for My Technical Background
Master List of Audio Reviews

napilopez said:
Just it's a bit odd to see all the different graph sizes, making some speakers look better or worse, and I know.
Click to expand...
There seems to be three or more subsystems that produce plots in Klippel system, each with its own settings, UI, etc. Two of them have no capture method so I have to do screen caps and such. For the one that does, I have standardized on 1000x600 and I have adjusted the scales to 50 dB. There is no place to save the defaults. I am hoping they are preserved across measurements and if so, they will be consistent. Otherwise it will be a pain to do every time.
Amir
Founder, Audio Science Review
Founder, Madrona Digital
Contributing Editor, Widescreen Review Magazine
Click for My Technical Background
Master List of Audio Reviews

amirm said:
So far I am running into a roadblock that IMD tests requires a license to purchase them!
Click to expand...
A license to distort.

To add a few more:

spacevector said:
Please perform listening tests with a high-pass filter (say 80Hz) so as to not handicap bass-limited designs.
Click to expand...
Huh? What's next, a low pass filter for speakers with no/blown tweeters?
Ricky Roma: I subscribe to the law of contrary public opinion... If everyone thinks one thing, then I say, bet the other way...

restorer-john said:
Huh? What's next, a low pass filter for speakers with no/blown tweeters?
Click to expand...
How about a low pass for we who can't hear up high anyway.

spacevector said:
Please perform listening tests with a high-pass filter (say 80Hz) so as to not handicap bass-limited designs.
Click to expand...
I did that with a powered monitor which I have not reported on. It is revealing but also time consuming to try all these alternatives.
Amir
Founder, Audio Science Review
Founder, Madrona Digital
Contributing Editor, Widescreen Review Magazine
Click for My Technical Background
Master List of Audio Reviews
S