with respect to operation into complex dummy load that simulates a 2-way real speaker. 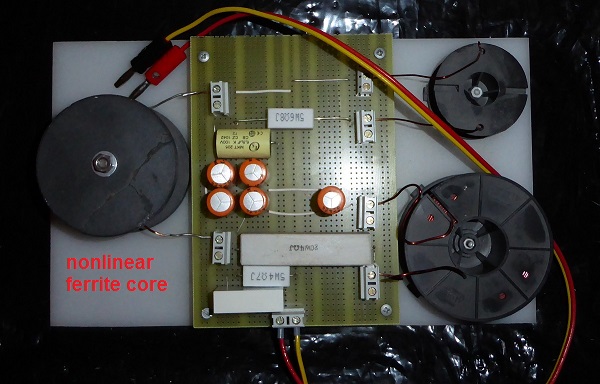 This is the circuit schematics of my dummy load 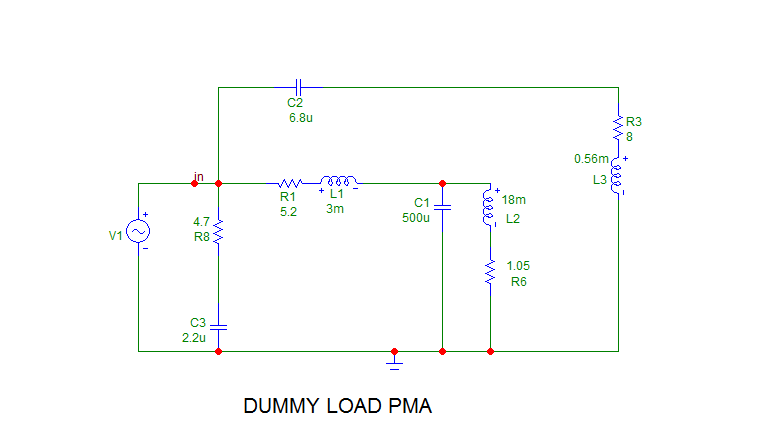 and this is a measurement of the dummy load impedance 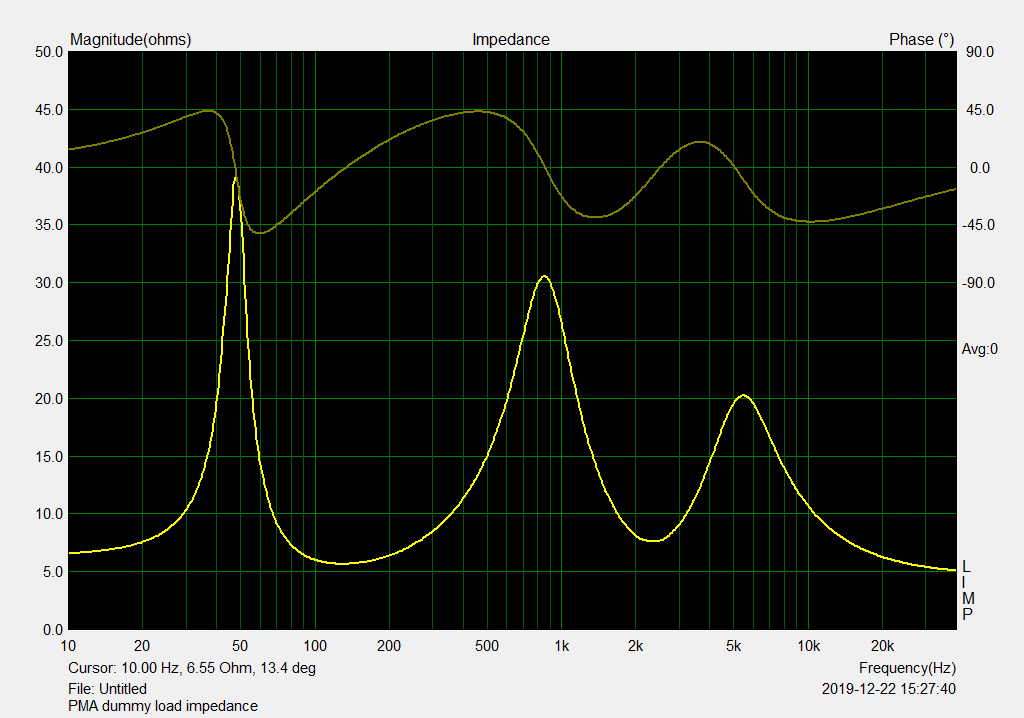 The plots were shown in the DIY amp thread but I re-post them for easier orientation. 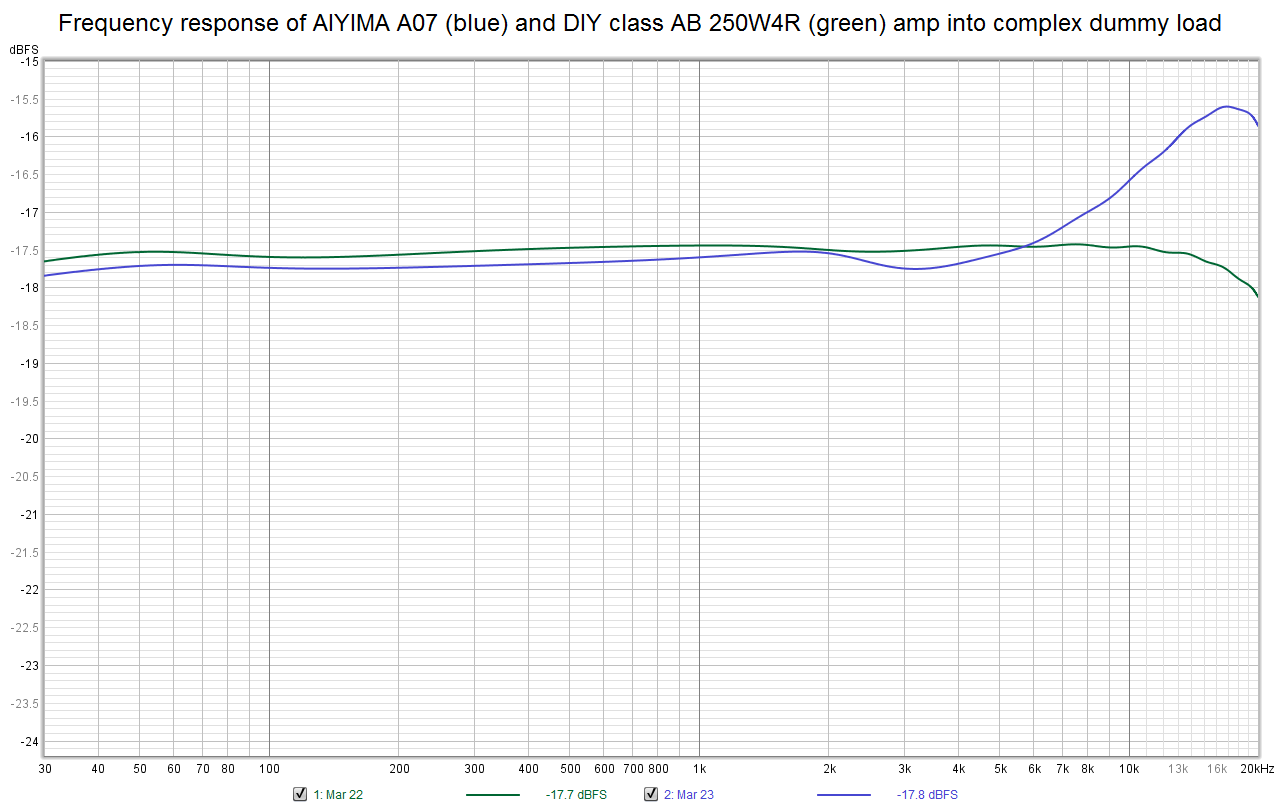 
The complex load includes highly nonlinear ferrite core coil of 18mH, which simulates quite well the nonlinearity of the real woofer near resonance. So let's measure THD vs. output voltage at 70Hz first. At 70Hz, we have 8ohm magnitude and -45° phase. 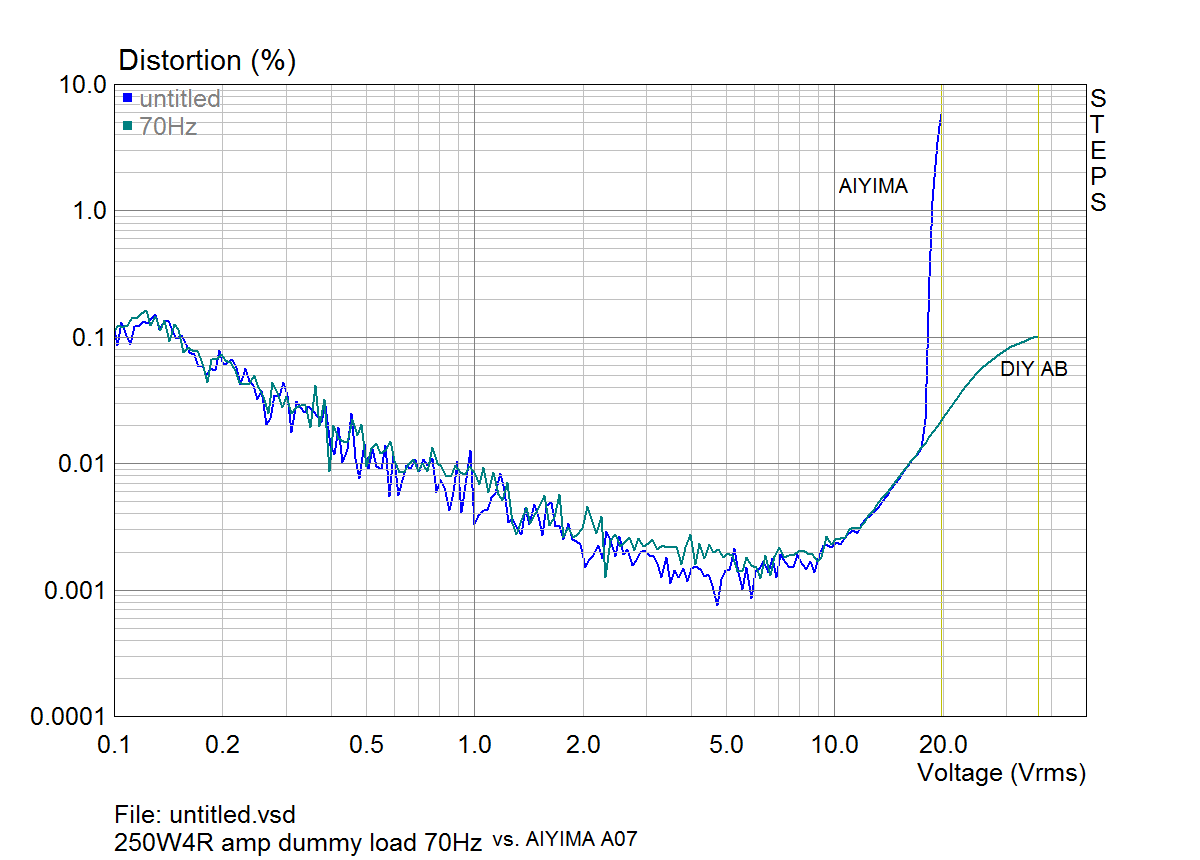 We can see quite similar distortion of both amps at this frequency, with AIYIMA having slightly lower distortion between 2V and 8V and of course a big difference in output power. Please note the fast rise of ferrite coil nonlinearity effect above 10Vrms. 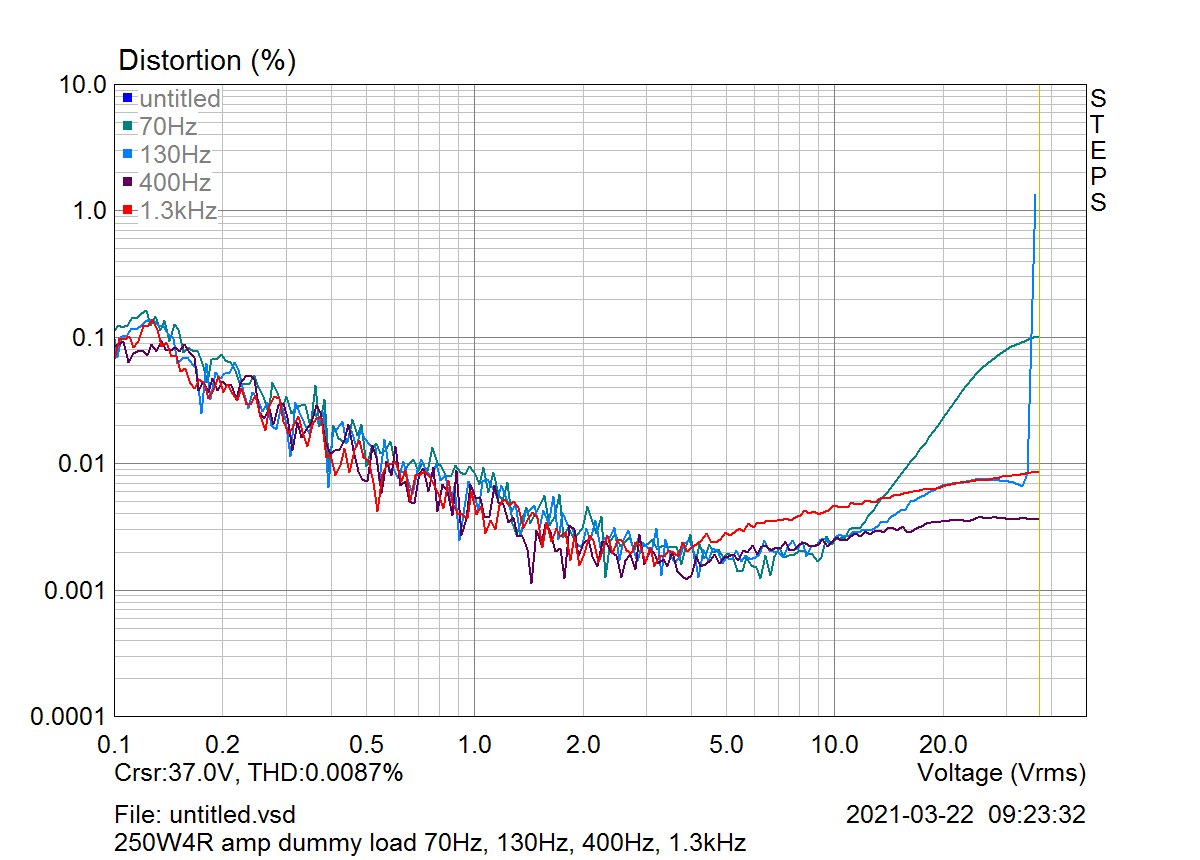 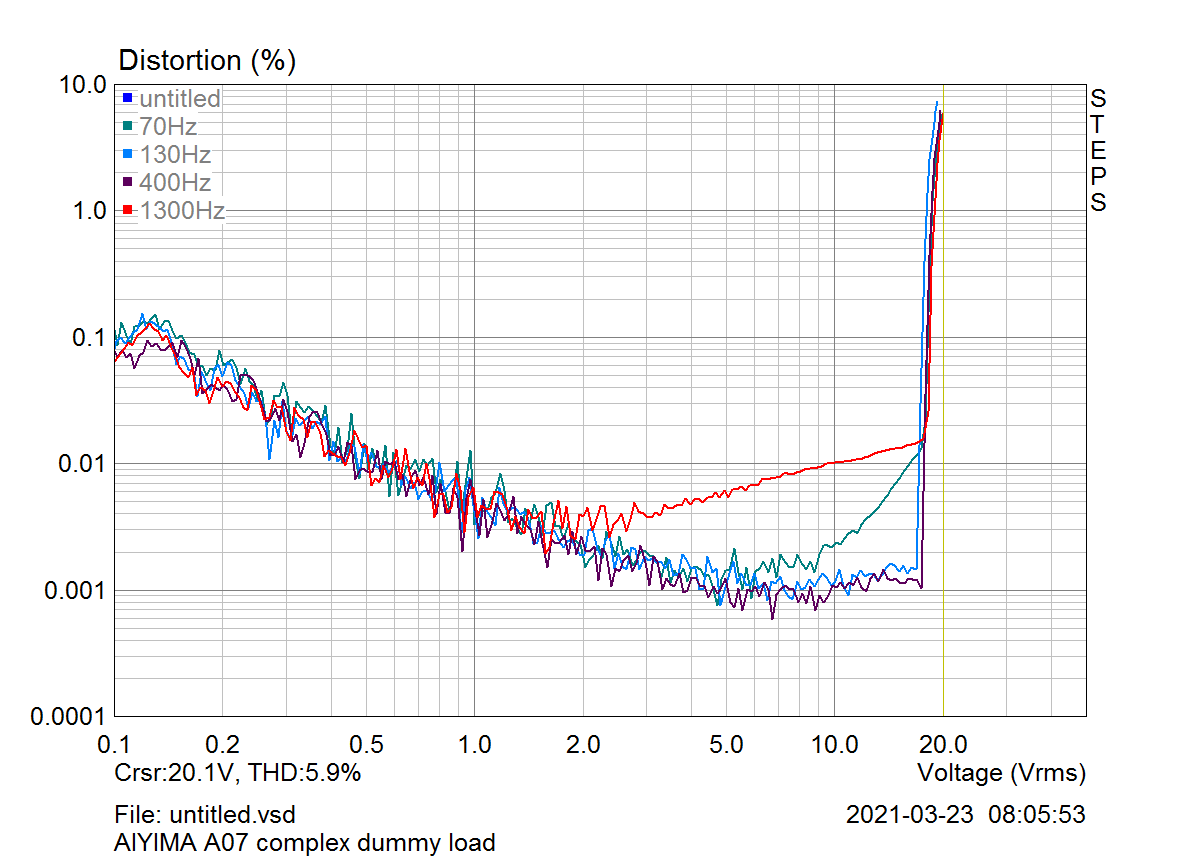 Now let's compare distortion vs. frequency, it was measured at 9Vrms which is still comfortable and almost optimum for AIYIMA. 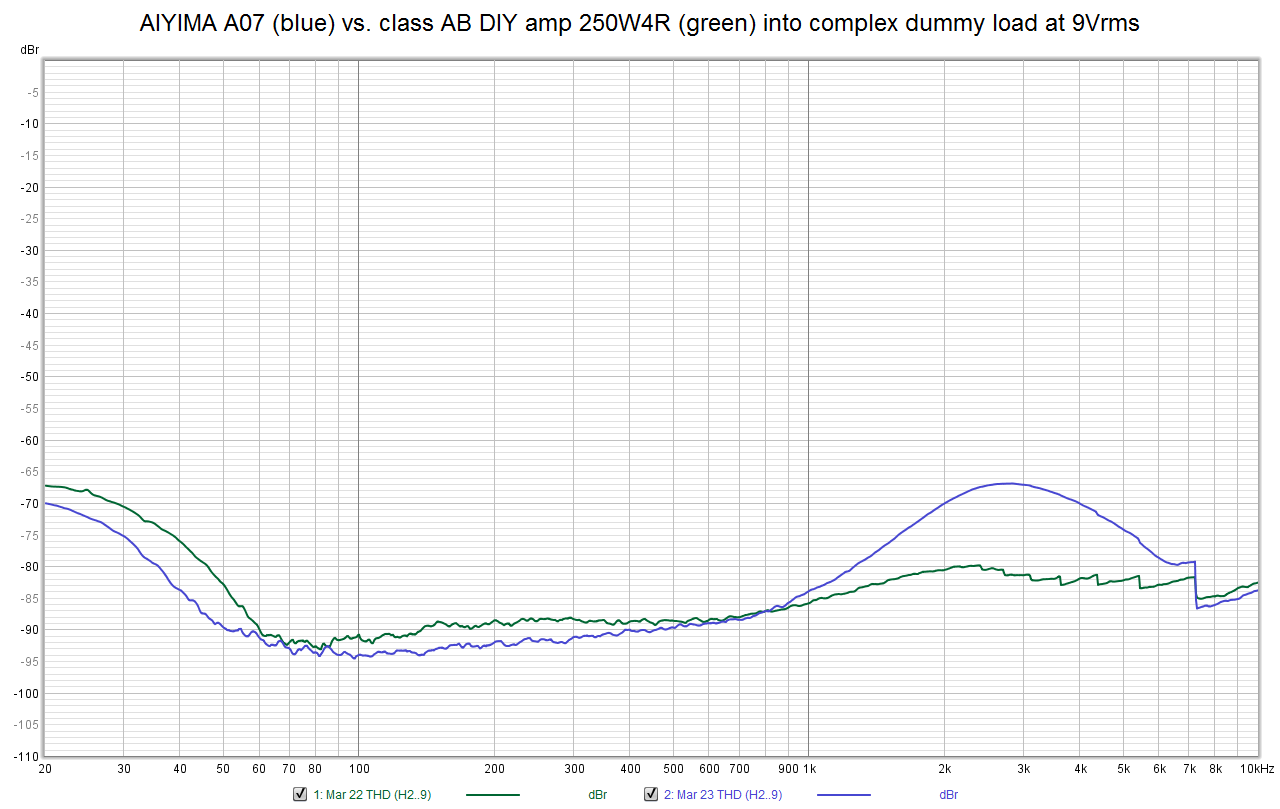 One can see fast rise of distortion below 80Hz, which reflects high nonlinearity of the ferrite core 18mH coil, this is reflected in nonlinear load current and this again in voltage distortion at amp terminals due to its finite output impedance.

Conclusion
So it goes, there are hints that the level matched AB listening test will bring differences. Mostly because of the differences in frequency response, but even the distortion differences might be interesting.
Last edited: Mar 25, 2021
https://www.audiosciencereview.com/...on-blameless-topology-and-measurements.21542/
OP

I am starting to believe that this is the method that may explain why amplifiers sound different and why they should be tested into complex loads, not only to resistive load.

I have added one more amplifier into the comparison plot. The results quite precisely reflect what is heard during the level matched AB listening test. 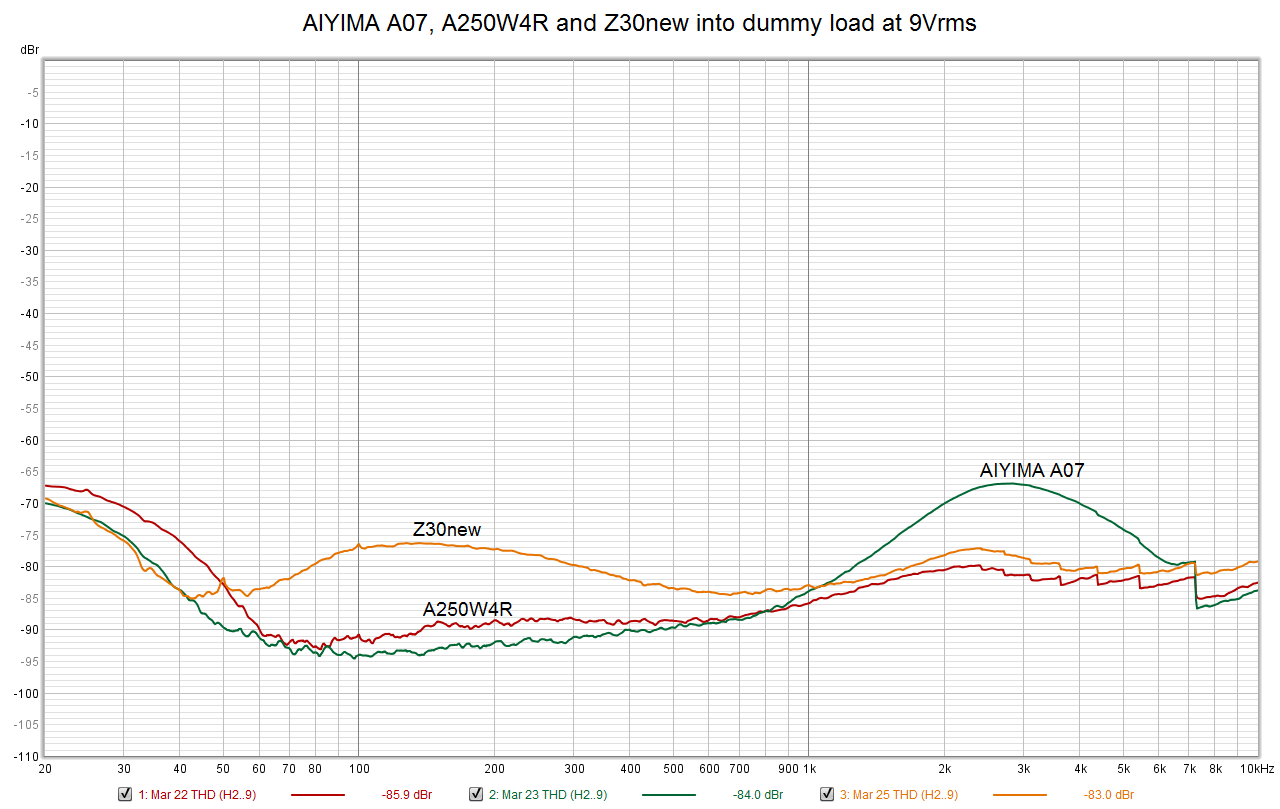 Great stuff, I've often wondered if this kind of test would expose audible differences between amps that resistive loads do not show. I also appreciate how Soundstage! measures amps with an actual speaker in addition to resistive loads like here, second plot under heading "RMS level vs. frequency vs. load impedance (1W, left channel only)", although only measuring at 1W doesn't show what happens when the driver goes highly non-linear as you show here. A counter argument, however, could be that if the driver's electrical response has gone non-linear it's acoustic response has probalby also degraded and that likely dominates acoustic error.
OP

ebslo said:
A counter argument, however, could be that if the driver's electrical response has gone non-linear it's acoustic response has probalby also degraded and that likely dominates acoustic error.
Click to expand...
That's absolutely correct, the acoustical distortion will always be greater than the electrical distortion. This is because the speaker impedance near resonance is highly nonlinear and even if the speaker was driven from an ideal voltage source with zero output impedance, the speaker current would be distorted due to Ohm's law (linear voltage divided by nonlinear impedance makes nonlinear current). However, it is still interesting to observe how speaker nonlinearity is reflected at the amplifier output.