This is a listening test, comparison and measurements of the Chord GroundARAY "noise reduction" devices. Member kindly sent me the Ethernet one which costs US $795: 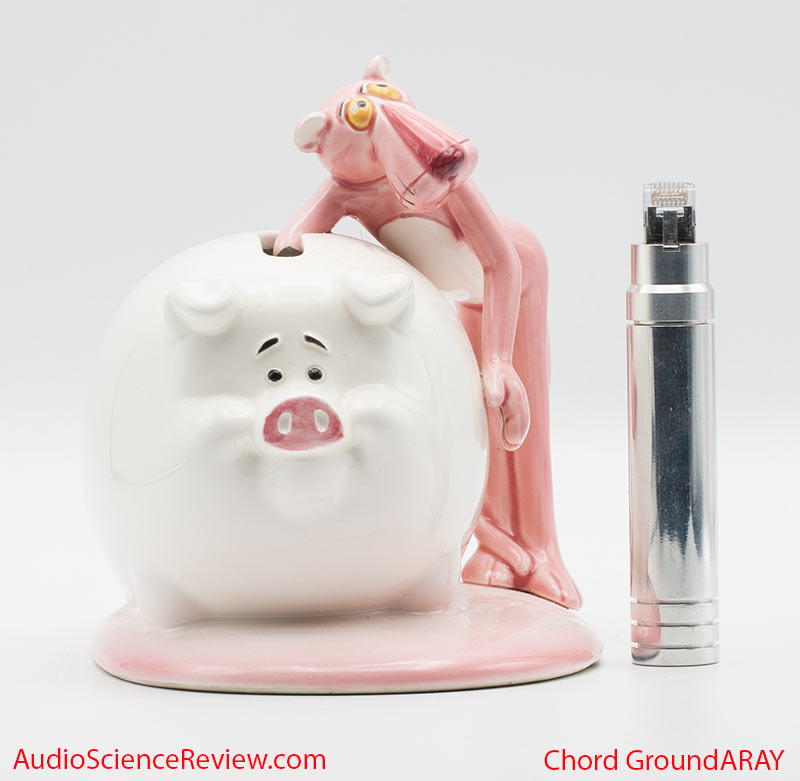 Here is the picture of the full set: 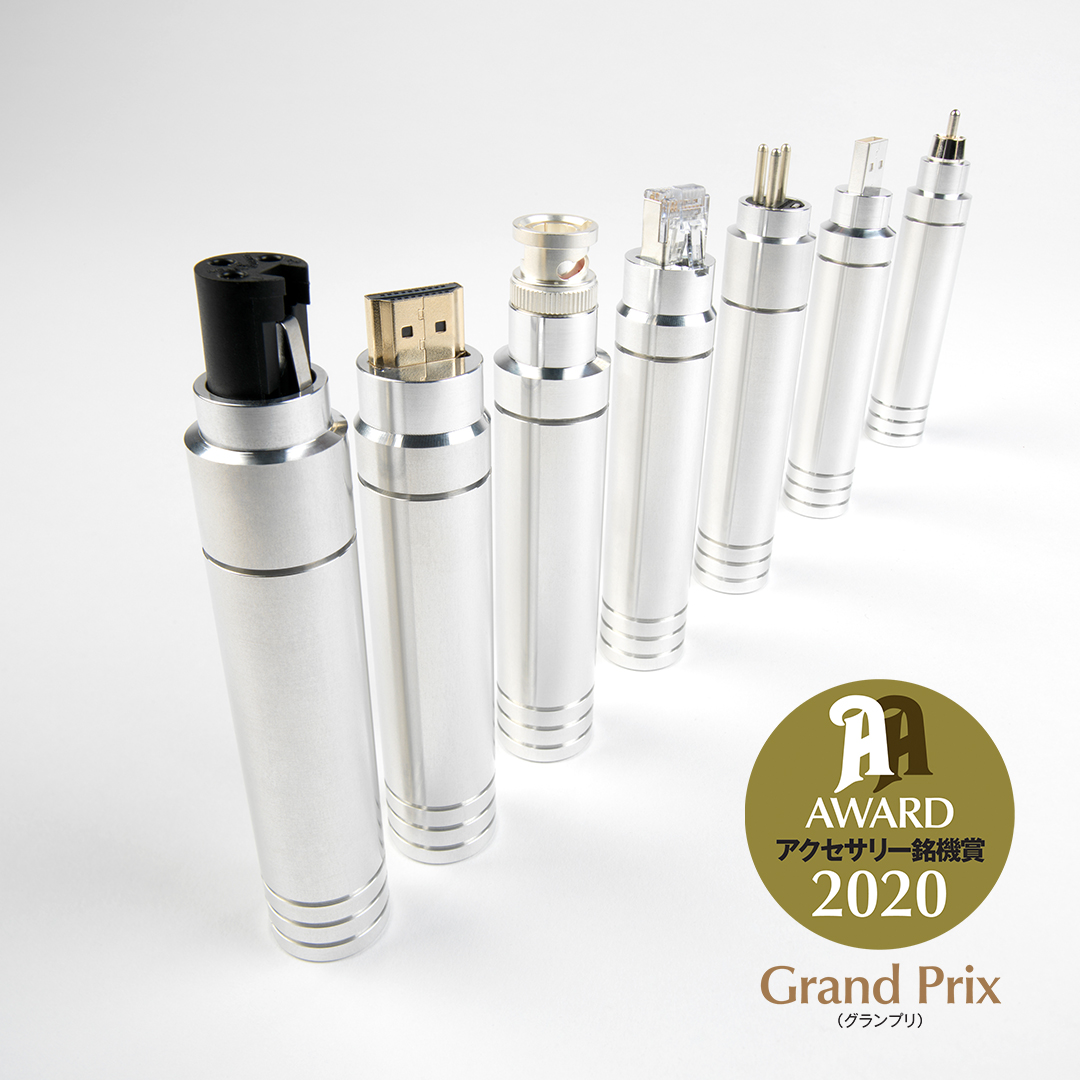 You are supposed to plug in the unit into the unused ports on your gear. And the more, the better.

NOTE: this is from CHORD Company, NOT Chord Electronics which makes the various DACs I have tested.

Chord GroundArray Listening Tests
My standard workstation where I perform my testing is naturally connected to our home network where a lot of the data files come and go during the testing over a TP Link switch. It has 8 ports with a few unused ones so I plugged the GroundArray into one of them. Inserting the device is easy. Getting it out is not because the tab is then hidden enough that you can't push to unlock it. I had to use a screw driver to push the lock in to remove it.

I played my reference tracks using RME ADI-2 Pro as I inserted and then removed the GroundARAY. There was no difference whatsoever to my ears. To avoid the accusation that I don't want to hear a difference, I then performed a null test using member @pkane's DeltaWave program. Here, RME ADI-Pro is capturing its own output for analysis. I made two captures: one with and one without GroundARAY. Here is the spectrum of null (difference) result: 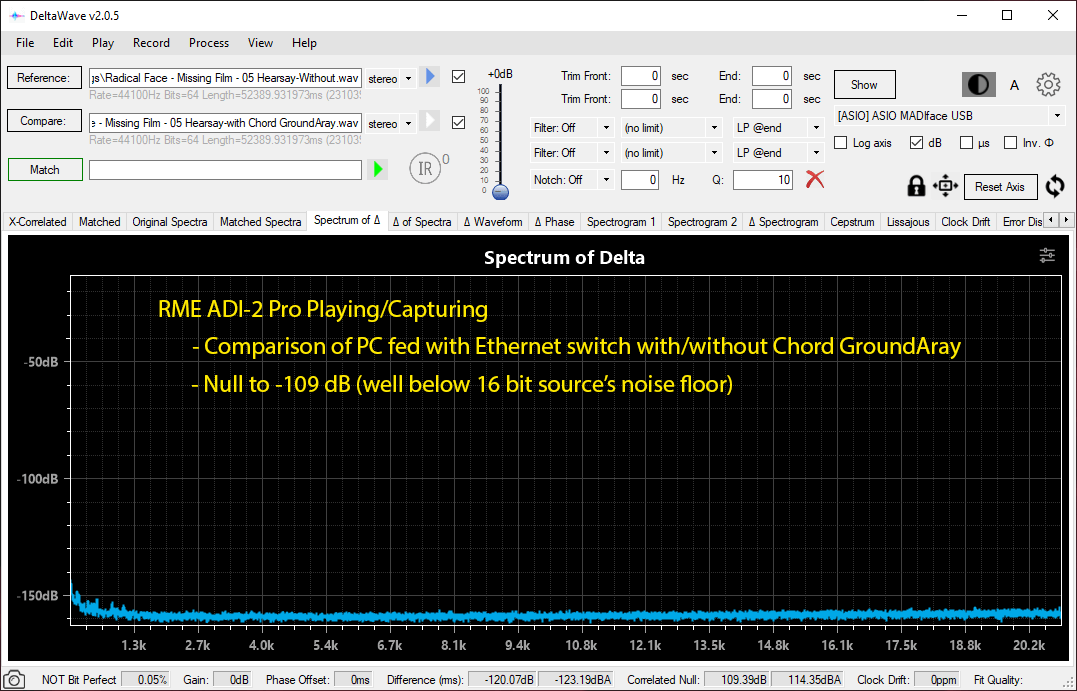 And here is the file itself if you want to listen: https://www.dropbox.com/s/mkm7zx4lz3zi6xy/Missing Film Chord GroundAray Difference File.wav?dl=0

Even with my sensitive IEMs and pushing the RME headphone output to absolute max, all I hear is silence.

Chord GroundARAY Measurements
I happened to still have the Chord DAVE DAC on hand so I used it for measurements (different companies -- same name). The configuration is the same as listening tests with the TP-Link switch being used to capture and save measurement files (and music I listen to while testing). Here is the CHORD DAVE dashboard measurement as is with output calibrated to 4 volts: 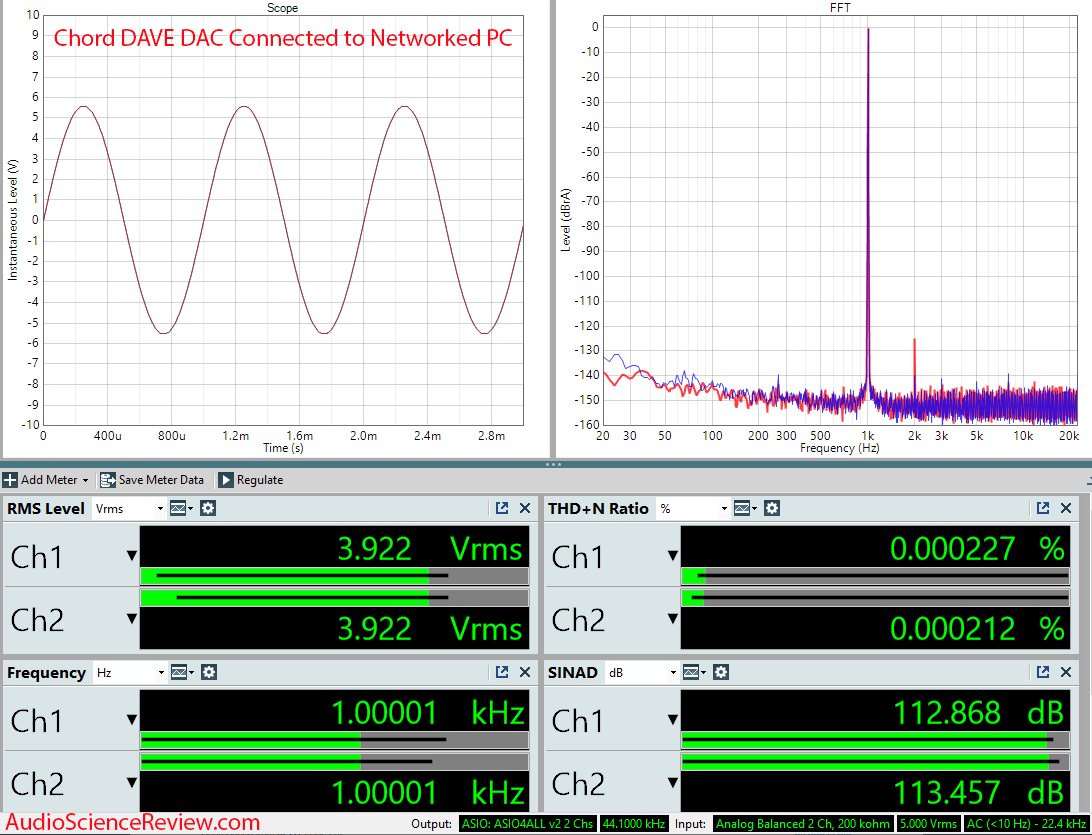 Per my DAC review note, one channel is less stable so I had to take care and graph that screen shot while it was on its best behavior. I then plugged in the GroundARAY to TP-Link switch. Here is the difference or lack thereof: 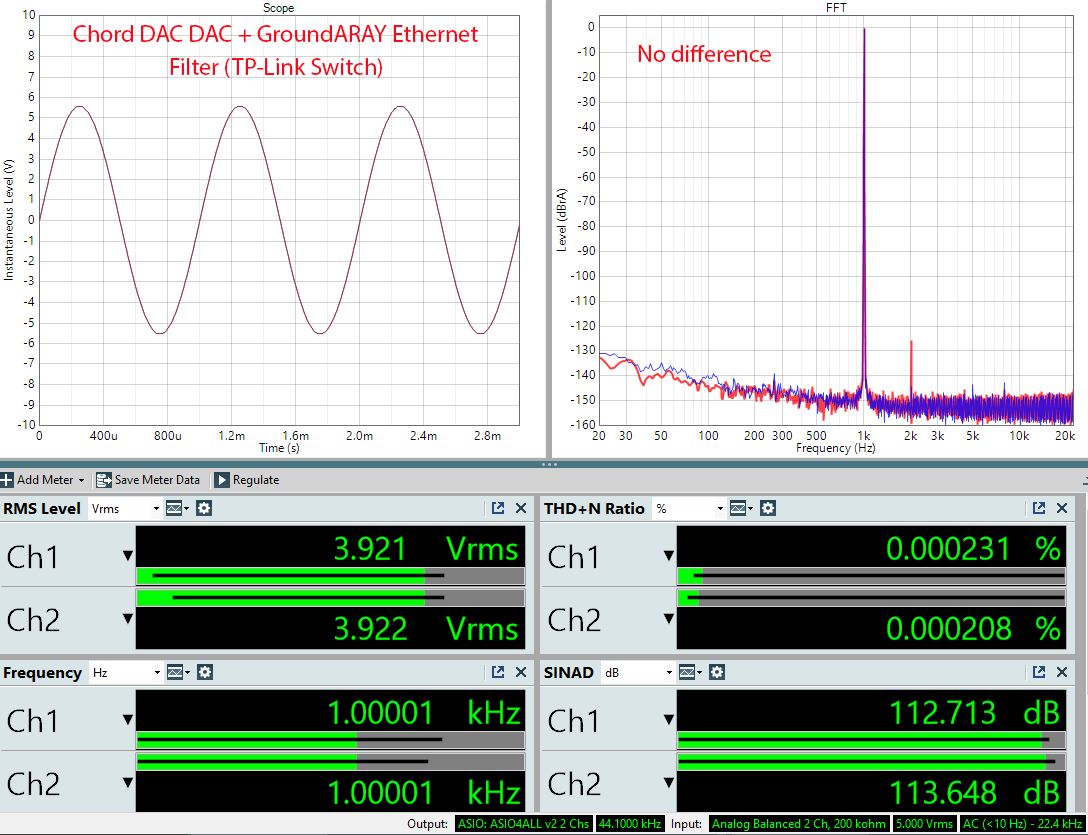 Nothing is out of placed or changed a hair for the entire audible band and then some (22.4 kHz bandwidth). SINAD is dominated by noise so if noise had gone down, it would improve but it did not. Let's measure dynamic range directly to assure ourselves of that:

Other than tiny run to run variation, there is no difference whatsoever.

For people complaining that we only use a single 1 kHz tone for measurements, here is our 32 tone test running at 192 kHz sampling (so very wide bandwidth): 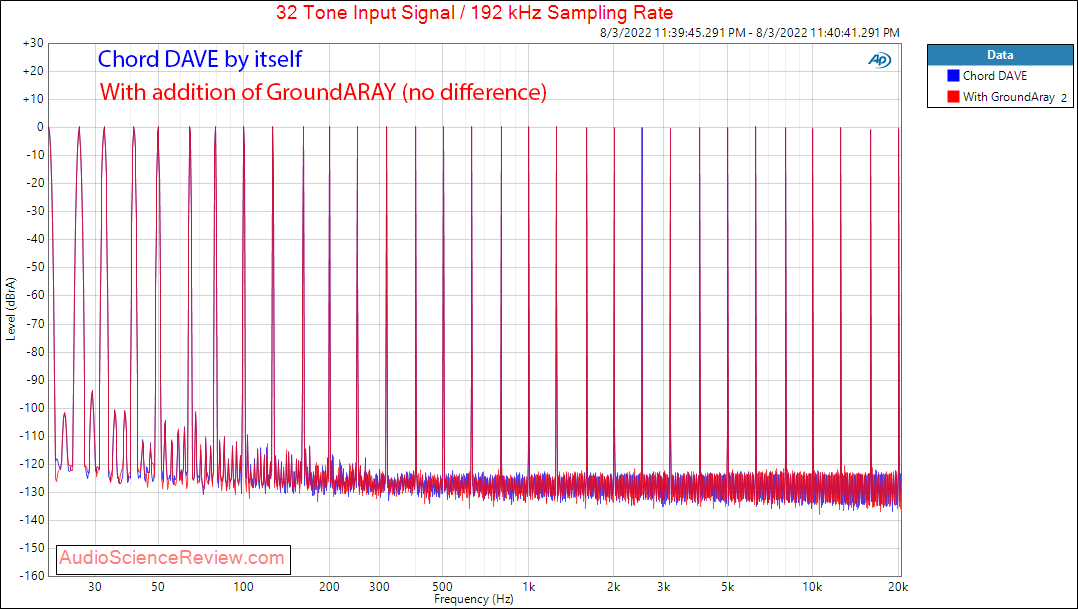 The two sets of measurements land right on top of each other with no difference at all.

We could run a lot more tests but results will be the same.

Conclusions
Even if the Ethernet GroundAray performed some kind of noise filtering, in which case company should so show that, the concept of it making a difference to a DAC output connected to said computer is incredibly far fetched. The PC is already much noisier than the Ethernet link yet we get superb sound out of it because DACs are designed to be immune to such noise. Furthermore, an Ethernet switch has independent ports. Filtering one is not going to do anything to the port next to it.

Audiophiles though with faulty testing methodology put aside all of that and say, "but I heard it." As I always say, I can put dirt in a box with a wire and you connect it to your audio system and you would report improvements. Indeed, such "grounding" devices exist and I have tested one that costs thousands of dollars! In this review, I have done my own listening tests with negative results. And used computer matching to show that there is no difference in the waveform to beyond the accuracy of the original audio files.

There is no way I can recommend the CHORD company GroundAray. 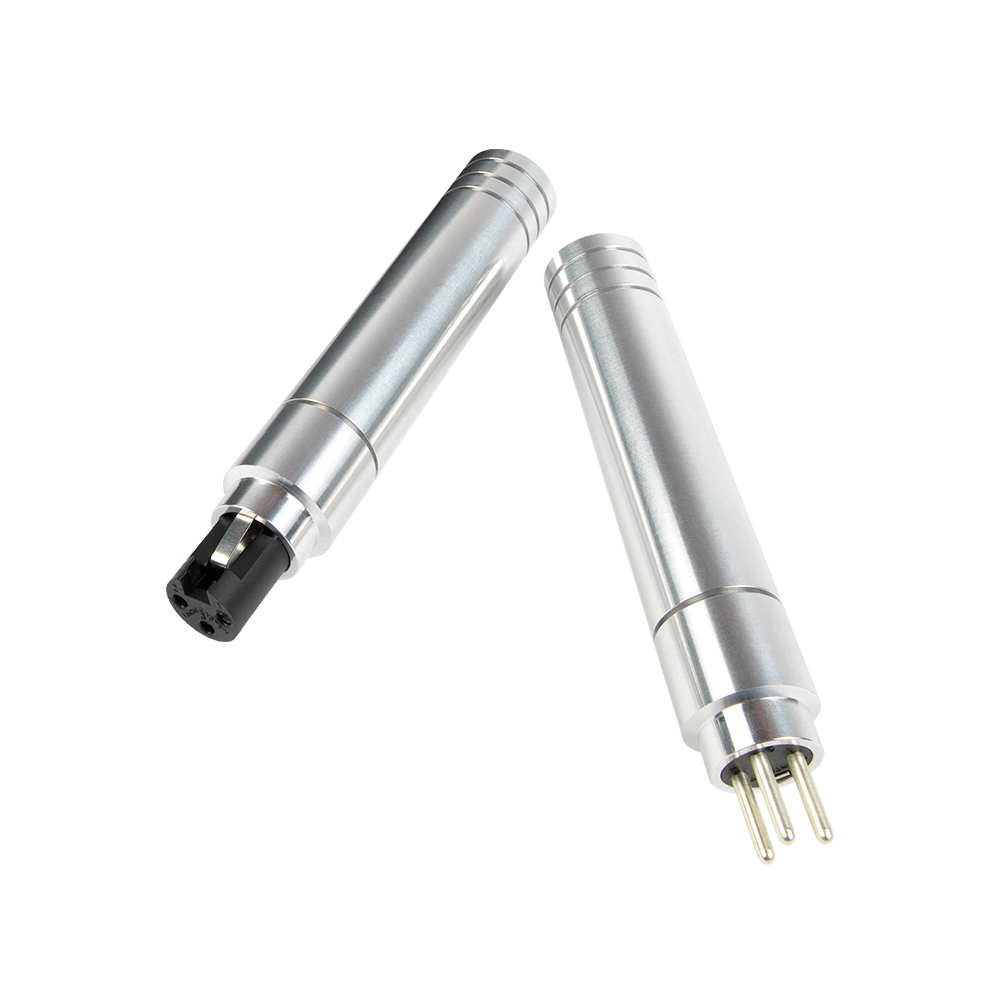 The GroundARAY is a next-generation high-frequency-noise-reduction device that connects to unused sockets on A/V equipment providing a low-impedance route for HF noise to pass through, directly improving the noise floor of the ‘host’ product. 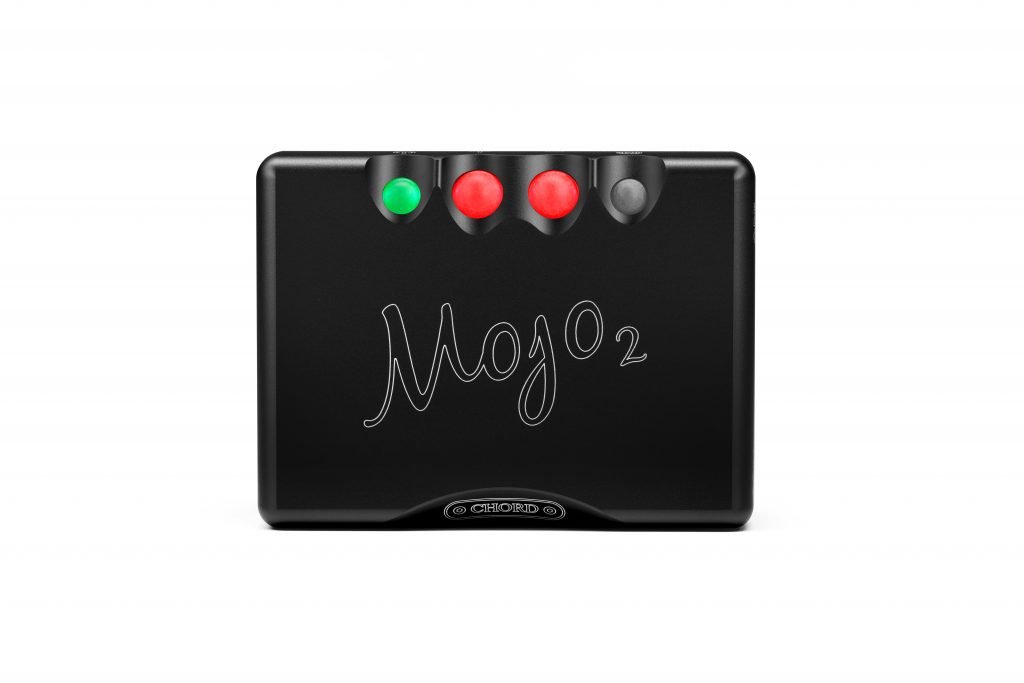 Not that different.
Keith
Purité Audio
www.puriteaudio.co.
'I have simple tastes, I am always satisfied with the best.'

Location
Deep in the Soundstage 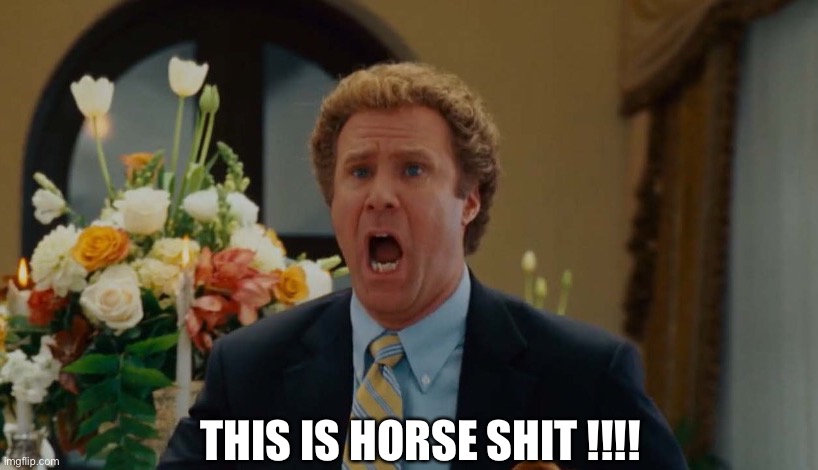 The systems I don't discuss here: Lots of sh*t you guys hate.

@amirm what's the weight of this things?
Seems weird such a lenght sticking out of a device,looks like an accident waiting to happen.
No.

amirm said:
the concept of it making a difference to a DAC output connected to said computer is incredibly far fetched
Click to expand...

Gotta admire the creativity of the scam though. The meeting where this idea was born must have been hilarious.
I have yet to see any problem, however complicated, which, when you looked at it in the right way, did not become still more complicated.

The Chord Company is NOT Chord Electronics in any shape or form. The Chord Company started out making interconnects for Naim amplifiers back in the early 80's which were all DIN socketed. The range expanded into the lower reaches of the foo-end of the market and they've got into these potentially lucrative products too.
Tear down these walls, Cut the ties that hold me, Crying out at the top of my voice, Tell me now if you can hear me...............

amirm said:
Furthermore, an Ethernet switch has independent ports. Filtering one is not going to do anything to the port next to it.
Click to expand...

That settles it, no more is needed. Because I am a good guy, I got to ask if there is some sort of arrangement where two or more ports work in common? Not that it would made any difference, but it would give some people hope that Amir got it all wrong again.

Who gave them that award in the photo btw, probably it must have been the company selling the "Furutech NCF Clear Line "AC Power Supply Optimizer." Such kindred spirits.

Fishing Permitted-Must Eat what you catch!!

More shameless marketing claims to basically scam you out of your money. The Audiophile world is chock full of scammers and fraudsters. I expect we will get the usual surge of new members declaring how they can hear the difference and your measurements fail to capture the unmeasurable benefits of these devices. I will set up the Welcome Wagon….
Kind regards,

AdamG
When an Observer truly believes in the Illusion, it becomes Real!
“Rules for Official Review Threads”
“All things in Moderation“
“Guide to Subwoofer Calibration and Bass Preferences”
“Bass Management for Advanced Users” Audioholics Video
B

Sokel said:
@amirm what's the weight of this things?
Seems weird such a lenght sticking out of a device,looks like an accident waiting to happen.
Click to expand...

Good point which I forgot to make. It is quite heavy. No ethernet port is designed for something like this dangling from it.
Amir
Founder, Audio Science Review
Founder, Madrona Digital
Review Thread Rules
My Technical Background
My YouTube Channel

Location
Cave in the desert

amirm said:
Oh, shoot. Let me correct the review then.
Click to expand...

It was still a bit misleading when I read the review (it was corrected when I read it the first time), I thought after reading the review that they were 2 different "sub" companies or something operating under the same brand name umbrella.....whereas after reading the comment from Static I realise they're not even related at all and it's just chance that they both use the word Chord as just part of their company's different names.
PC Setup: SoundblasterX G6 DAC -> JDS Labs Atom Headphone Amp -> AKG K702 & Sennheiser HD560s & Hifiman HE4XX & NAD HP50 & Sennheiser HD600 all EQ'd to Harman Curve. IEM: TRUTHEAR x Crinacle Zero.
TV/"Home theatre" Setup: Sony Bravia KDL42w653a (calibrated with Spyder4Pro and HCFR) -> miniDSP 2x4 -> JBL 308P Mkii Speakers (2-channel) & SVS SB-1000 Pro Subwoofer
Music Listening Setup: (as TV/"Home theatre" Setup above except....) Laptop -> Topping E30 DAC -> miniDSP 2x4 -> JBL 308P Mkii Speakers (2-channel) & SVS SB-1000 Pro Subwoofer
S

Which dick voted great, I love you.

DSJR said:
The Chord Company is NOT Chord Electronics in any shape or form. The Chord Company started out making interconnects for Naim amplifiers back in the early 80's which were all DIN socketed. The range expanded into the lower reaches of the foo-end of the market and they've got into these potentially lucrative products too.
Click to expand...

Correct. They were based in Salisbury (now moved about 20m north to Amesbury) where I used to live. I was a good friend of Julian Vereker RIP, the founder of NAIM Audio and through him I met the Chord guys. They started manufacturing very high quality cables for a high but not silly price. I own many of their cables and still use them.

Seeing these products, it looks like they entered to the audiophool market. Such a shame.
Designer of Silver 5L - Equipment list on About
BSc, MSc (EE, Imperial College, London), MA (acoustics, Surrey University, UK)
Wood acoustic diffusers have become a decorative item - loved the idea!
My acoustically treated Home Theatre (updated)
How loud is loud, how to measure it? Is THX calibration bad for your health?