... for that sort of money one would expect a 100% SOTA DAC and surely a more luxurious look.

Here is under the hood; 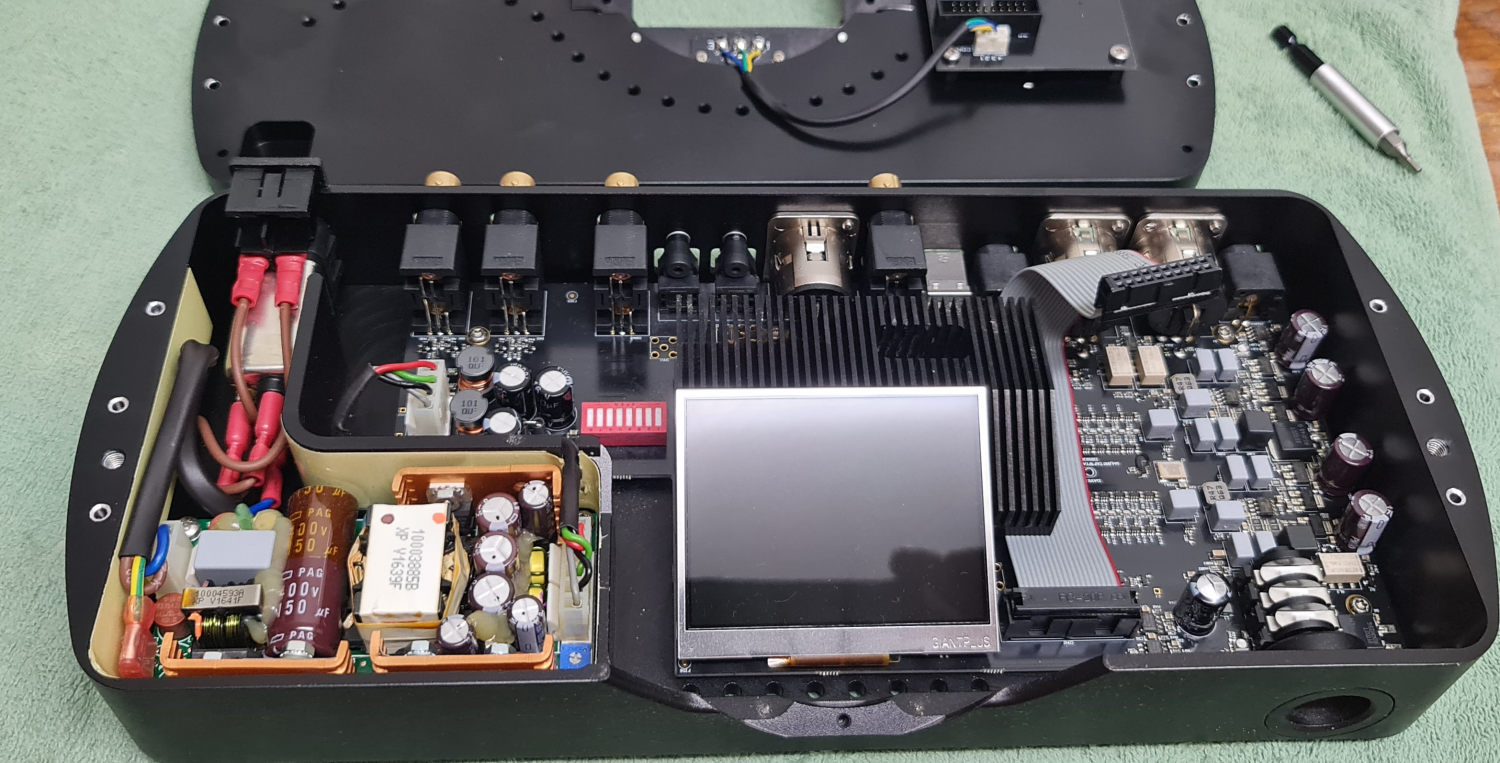 AudioJester said:
What effect does reconstruction filter have? I mean is it audibly noticeable?
Click to expand...

I forgot to mention this thing runs warm. Even the XLR cables were warm when I tried to disconnect them.
Amir
Founder, Audio Science Review
Founder, Madrona Digital
Review Thread Rules
My Technical Background
My YouTube Channel
G

Their numbers/measurements look different. Any thoughts what they might be doing differently, @amirm ?

Confirms my attitude of regarding "moon prices" as an IQ test

BTW: I can't vote on this (the piggybank panther is missing).

Performance is one thing, what I wonder though who is the target group of this product, as it is rather small and looks toyish which is not what a typical audiophile looks for at a five digit price.
Some comments from Floyd Toole about room curve targets, room EQ and more

... for that sort of money one would expect a 100% SOTA DAC and surely a more luxurious look.

Here is under the hood;

A switcher PSU. The purists' heads will explode.
I'm your boogie man, that's what I am.
A

Great review as usual. I can now label Chord as scammers!
T

The most disappointing/shamefull side of It all is that there is a market ( buyers with pocket money enough...) to support businesses like Chord's and similar stuff...

With the M Scaler review you merely left the shit door ajar, with this DAVE review you’ve removed the door from its hinges, took It down the bottom of your drive, lit a signal fire and thrown the door atop, stood back admiring your work then whistled your way back up the drive and constructed a huge neon sign with the power equivalent of Las Vegas with 50ft lettering saying……

BRING IT ON biatch

By the way here are the measurements from Goldensound with M Scaler too. 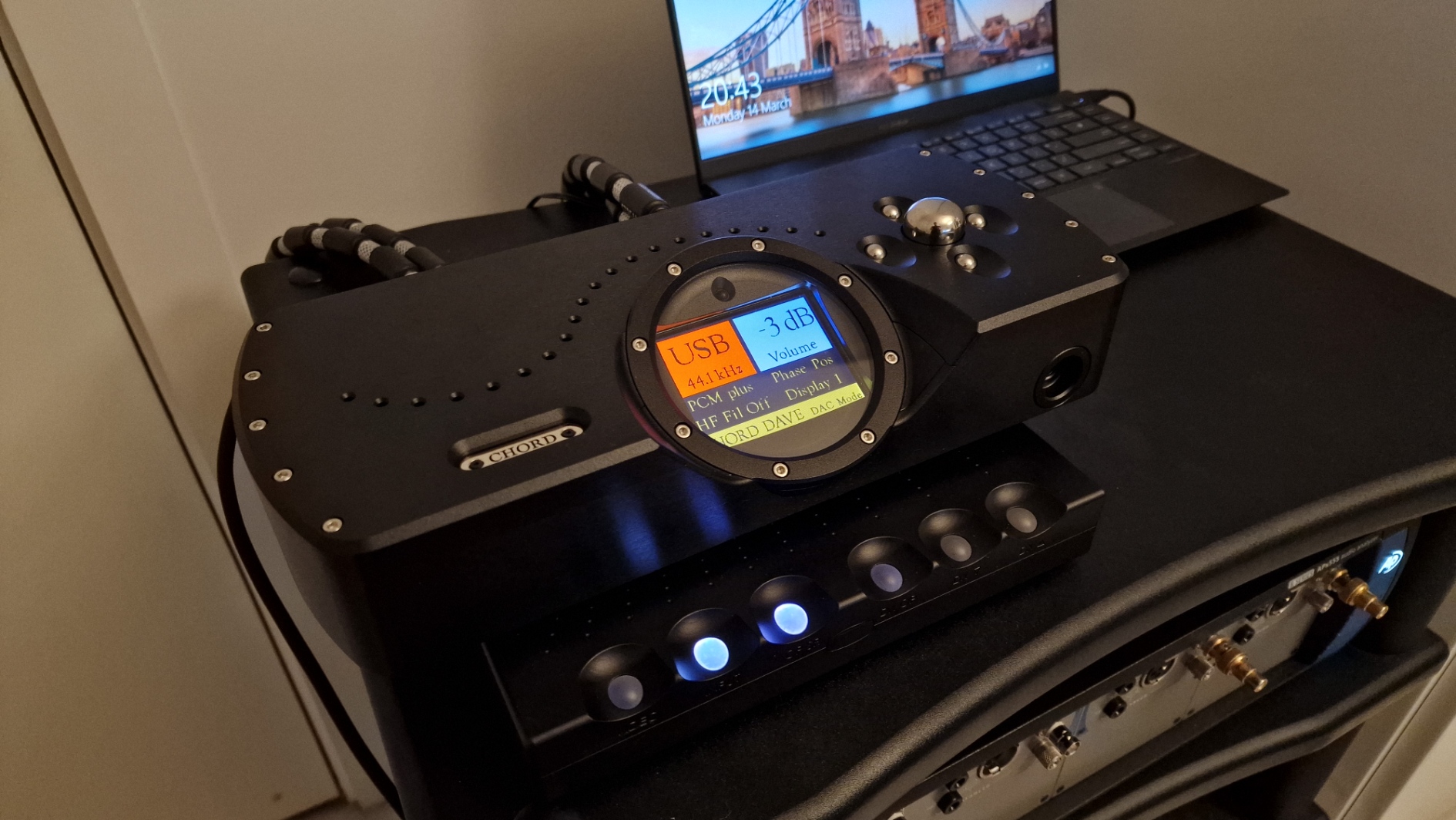 Technical measurements and analysis of the Chord DAVE DAC. This is a high end DAC with some great and not so great aspects

Lol, my JDS Labs Atom Amp at around $100 outperforms this by a whole 10 dB in this test!

Hehe, I could see another support thread shaping up in the Head-Fi world with evangelists flocking
An audio purist, not really an audiophile
B

I have no idea how to rate this because the piggy bank panther is missing. Objectively it's in the top quartile. Also Objectively it is ridiculously overpriced and not competitive with the rest of the occupants of the top quartile. So I think that makes it a piggy bank panther in my pantheon...
Chasing unicorns and white rabbits... "Price, Quality, Convenience...pick two."
What I have bought because of ASR:
1) Topping E30 DAC->Elac Debut Reference 62 for 2.1 music listening.
2) Anthem mrx1140->7.2.4 monitor audio architectural speakers and 2 svs sb-2000 for Dolby Atmos Home Theater.

Thank you very much, Amir, for your excellent, much needed corrective work in the ocean corrupted by all the paid reviews, paid forums, and influencers who get these expensive devices for free (high resale value).

This is the test I had been waiting for all the time!!
I was always hoping for someone to ship you his Dave.
Many many thanks to the nice person (Jomungur ?) who shipped his expensive device for testing .

Because this thing was praised so much as the absolute flagship, absolute top.
I auditioned it a number of times, without and without the M-Scaler.
In my first auditions, I had the subjective feeling that the Dave was making the Utopia headphone sound much better than anything else. At some point I also felt that the M-Scaler was bringing in additional improvement.
Such is the psycho-social power of paid internet reviews and especially of company-sponsored sites such as Head-Fi, all the praise had conditioned me in a high expectation bias.
Luckily, the crazy price and the awful (so unpractical) design of the Dave had holden me back from a wrong purchasing decision.
At a later audition, I was disappointed by the M-Scaler, and at another one I felt the Benchmark DAC3 was cleaner with the Utopia than the Dave. I guess I had started to be less deluded by the group effect of these influences, and was less unconsciously biased.

So I am still there with my RME ADI-2 Pro as my desktop device, the volume button doesn't do what it should do when I turn it, but the RME allows me to control so many things, that I have kept it, and not even bought yet a Topping.

Thank you again, Amir!
There are so many people still unfortunately psychologically misled by Web influencers and company-sponsored sites with a strong (marketing induced) group-think. Hopefully they will be helped with such a review and have their eyes open, people can for sure waste their money, but hopefully not by being deceived.

The king of the so-called audiophile "summit-fi" (= extracting the most money from customers), so much praised, up to heaven (including by me years ago, shame on me...) has been weighted and found wanting, swept away. The king is definitely naked, so many thanks to you, Amir.

And be gone all the paid reviews and the too delusive impressions.

(I now voted "poor" because it is way too expensive, and yet does not even deliver as very cheap devices = unacceptable on the take, a mere audiophile myth for which the company gets all the hardly earned money of many deceived persons).
Last edited: Jul 24, 2022

Strive to be Understood, rather than heard!

Amir’s reasoning in the past is the Piggy Bank is for products that say they do things they don’t. Or serve zero purpose or make things worse by using them. In this case the product mostly does some of what they say it does. Might be a poor performer but it is a functional DAC and such. @amirm will correct me if I have this wrong.
Last edited: Jul 24, 2022
Kind regards,

DonR said:
A switcher PSU. The purists' heads will explode.
Click to expand...

What I found interesting is this is a pulse array DAC, which is supposedly meant to assist with noise floor modulation... yet Amir measures a modulating noise floor. Further from what I recall reading this is a single ended design (like all Chord DAC's I believe) and the XLR is there for convenience only via an inverting opamp, so this is why Amir is measuring slightly better performance via RCA.

Probably need to mount it in the matching Choral Ensemble Stand System ($2,425.00) to get the best results!