We replaced our AVR with one of these cheap HDMI switch/extractors and a decent integrated stereo amp. Subjective SQ is much improved for music listening, especially the TT, so clearly the AVR was a PoS amp. But Idk about HDMI sound. I'm really curious. I think it would be hilarious if this $50 thing does as well as the typical AVR, which, as Amir has shown, is pretty weak. I'm also curious if there's much difference between the analog and optical outputs.

I use mine every day but I'm curious enough to get one to you @amirm if you'd put it through the wringer.

The hardware package is a huge improvement over the AVR. It's small and tucked away in our living room away without losing IR remote control. Neither of us want consumer electronics messing up the aesthetic or consuming valuable space.

HDMI inputs connect to a Sony BluRay player, Roku Ultra and Raspberry Pi. Output is an Epson 1080p projector and RCA to the integrated amp, which provides volume control. We haven't tried the optical output since we don't have anything to connect that to. Its wall wart plugs into a switching power strip controlled by the current drawn by the amp so there's no need to use the on/off switch or remote on/off control. We control it with our Sony universal remote, which was programmed using the learning method, but there's seldom any need as its automatic input selection usually does what we want.

It works 100% as advertised in this setup and with all our program material. Picture looks fine. Idk if it is degraded in ways an expert might notice. Sound for DVDs and streaming video is fine: no obvious defects/artifacts. Beyond that I can't say. Fidelity of sound reproduction watching Rick and Morty, Death in Paradise, or you-know-what isn't such a big deal and I wouldn't know how to judge it anyway. I could try playing some CDs on the Sony BluRay player through HDMI but I'm not sure what that would mean without evidence that the player does a proper job converting CD sound to HDMI. 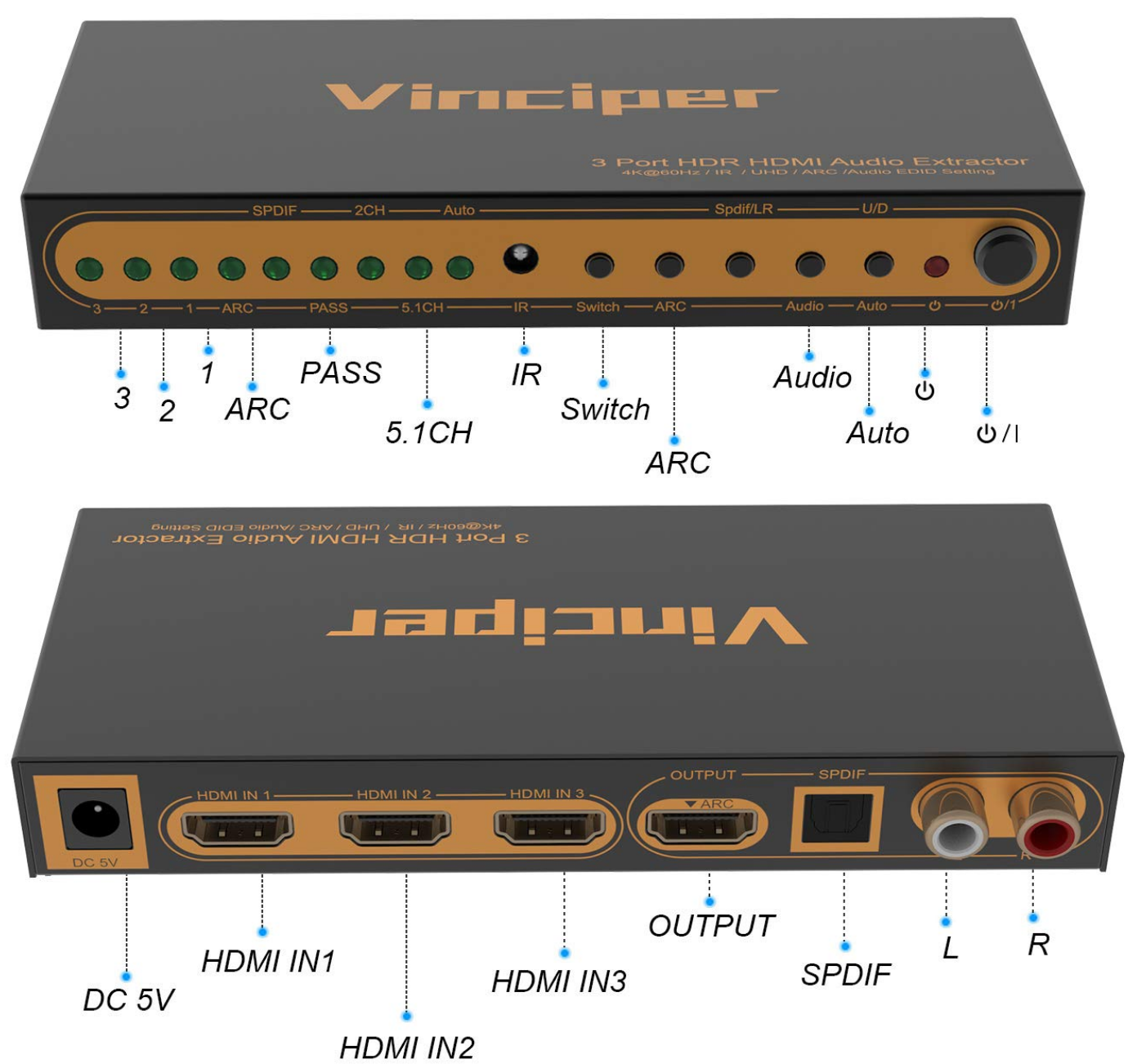 Some Samsung TVs come with a 'One Connect' box that provides similar functionality to what you have achieved. I can't recall if the one on my TV has an analogue audio output, but I do use the optical output to run a wireless headphone transmitter.
Desk: PC > Topping EX5 > Sennheiser HD 660S / HifiMan HE4xx / PreSonus Eris Sub8 > iLoud MTM monitors
Easy Chair: CCA > Topping D50s > Topping A50s > AKG K371
Mobile: Samsung Note 9 512GB + 512GB with UAPP > Radsone ES100 > Moondrop Starfields
M

Technically, besides some jitter issues, that you won't notice, it should make a transparent 1:1 copy from hdmi to hdmi.

SPDIF also, once more with some jitter, and the analogue part should be as good as the DAC it has internally.
A

audiophool said:
Use your TV lmao
Click to expand...

I have Genelecs 8340 as LCR and 8330 as surrounds with 2 SVS subs. DRC is via GLM. I only use Apple 4K TV. I want to replace my AVR with a simple switch like this. I could feed HDMI from ATV into this switch. Question: How can I do bass management? How can I feed SPDIF into 5 Genelecs Speakers and analog signal into SVS subs? any ideas?
Main Movies: Apple 4K TV -> Yamaha RXV775 -> Genelec 8340 LCR with GLM DRC -> Genelec 8330 Surrounds with GLM DRC -> 2 SVS SB-12nsd subwoofers with miniDSP DDRC24 Dirac Live
Main Music: Raspberry Pi4 -> Topping D10s via USB -> digital out via Coax -> Genelec 8340 LR with GLM DRC -> 2 SVS SB-12nsd subwoofers with miniDSP DDRC24 Dirac Live
Headphones: Iphone -> AirPods Pro, Ipad -> Fiio BTR5 DAC or Tempotec Sonata HD Pro -> Beyerdynamic DT-770pro 80ohm
Listening room: LD systems xs700 PA amps -> DIY open baffle speakers similar to PAP

I have Genelecs 8340 as LCR and 8330 as surrounds with 2 SVS subs. DRC is via GLM. I only use Apple 4K TV. I want to replace my AVR with a simple switch like this. I could feed HDMI from ATV into this switch. Question: How can I do bass management? How can I feed SPDIF into 5 Genelecs Speakers and analog signal into SVS subs? any ideas?
Click to expand...

I have seen you post this question in two different threads that are on other topics. Why don't you start your own thread to answer this question? (I am also interested in the answer.)

looking for a HDMI audio extractor for a specific application

A
Stereo downmixing through an AVR - effective or add a centre channel?
2 3