Capacitor upgrade in crossover - Is it audible? - Part 2

Here is the second part on the topic "Capacitor upgrade in crossover - Is it audible?
This time it is exclusively about the measurable differences of electrolytic capacitors with film capacitors in crossovers of loudspeakers.

The first part about film capacitors can be found here and who likes can read about the measurable differences between sand-cast and low-inductance resistors here.
The third and final part on this topic: Capacitor upgrade in crossover - You Can't Handle the Truth - part-3

The test method and test setup were described in detail in the first part. If you're not familiar with what a capacitor (in series with the driver) does, you can read this in part one either - I'm too lazy to repeat all this. 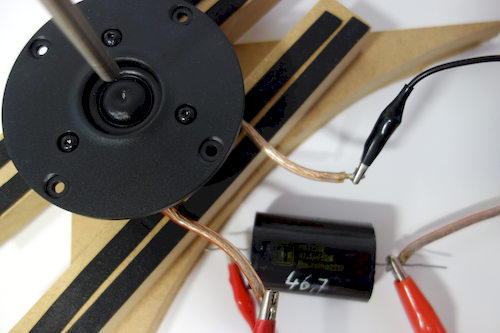 As in part 1, the capacitor is connected in series to the chassis and then measured in the near field.

Electrolytic capacitor versus film capacitor
To obtain more certainty about the accuracy of the measurements, comparisons were made with three different capacitance values - 8.2µF, 47µF and 100µF.
High capacities in series to the driver are mostly used in the mid-range crossover. Therefore the measurement for 100µF was carried out with a mid-range driver.

a) Comparison with 8.2µF capacity 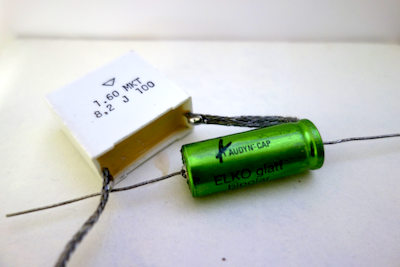 The film capacitor has a capacitance of 8.47µF, the electrolytic capacitor one of 8.46µF. The deviation of the capacitors from each other is therefore only 0.1%. According to the investigations of capacitors with low capacitance deviations made in part 1, the measured deviation should be only minimal. 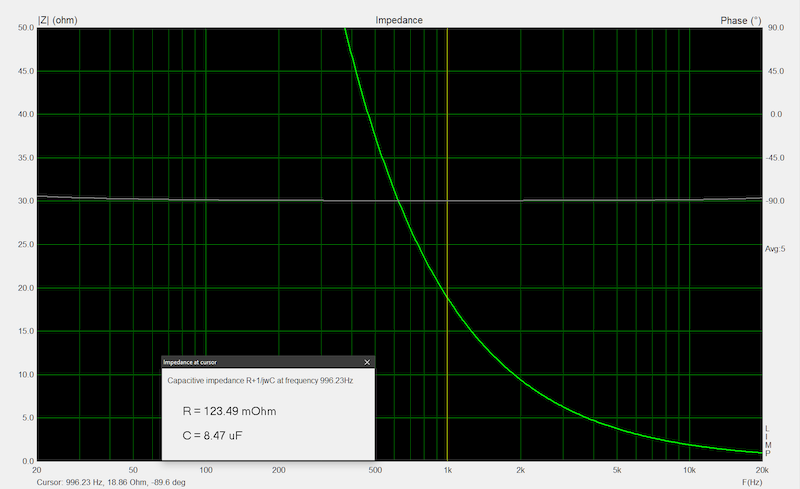 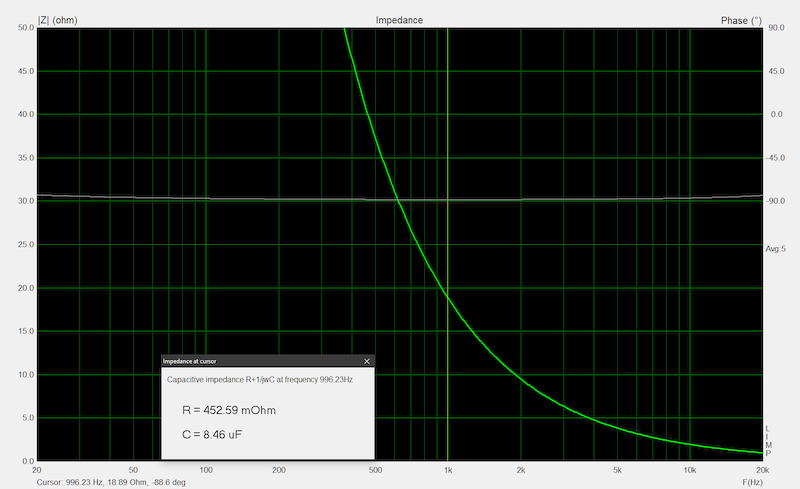 It is easy to see that the resistive part of the electrolytic capacitor is four times as high as that of the film capacitor.

Let's take a look at the frequency response measurements.

A very small difference can be seen. To be able to see the difference better, the diagram is normalized to the frequency response of the MKT capacitor and displayed with a scaling of 0.1dB.

Here, the high ESR of the electrolytic capacitor has a clear effect on the frequency response of the tweeter.

b) Comparison with 47µF capacity 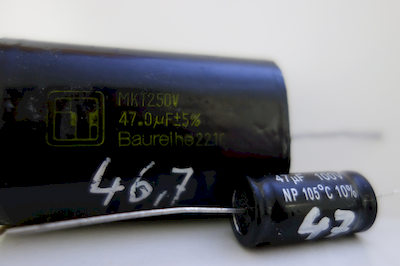 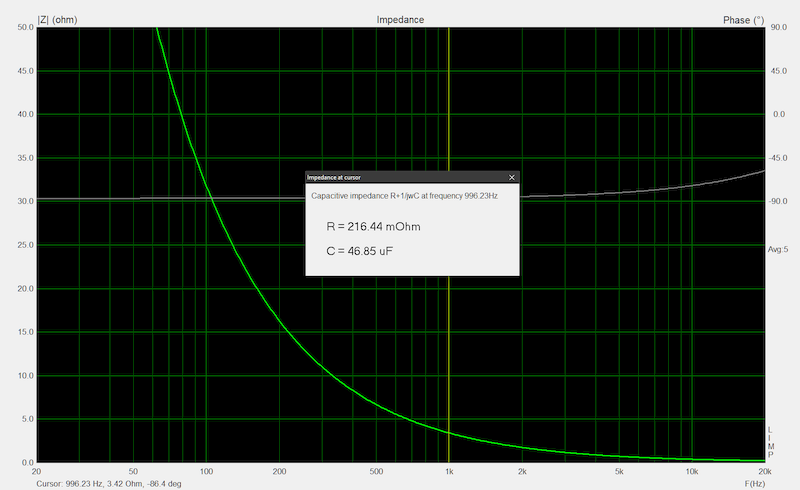 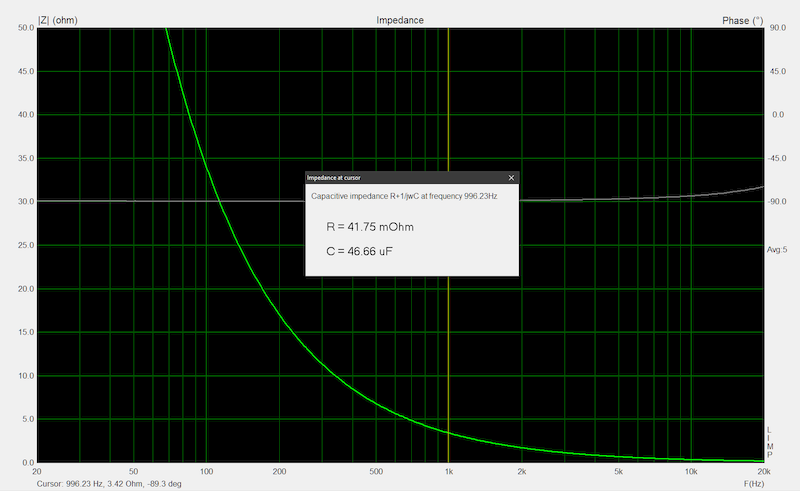 The resistive part of the electrolytic capacitor is five times as high as that of the film capacitor.

To be able to see the difference better, the diagram is normalized to the frequency response of the MKT capacitor and displayed with a scaling of 0.1dB.

Film capacitor and electrolytic capacitor behave as in the example above.
The maximum sound pressure difference in this case is 0.2dB.

c) Comparison with 100µF capacity
Here, an additional comparison of an old and a new electrolytic capacitor is to be carried out. 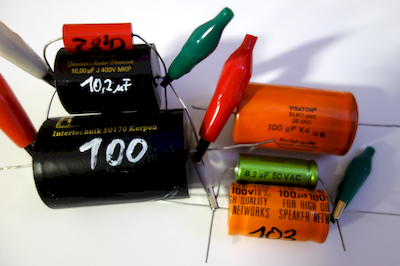 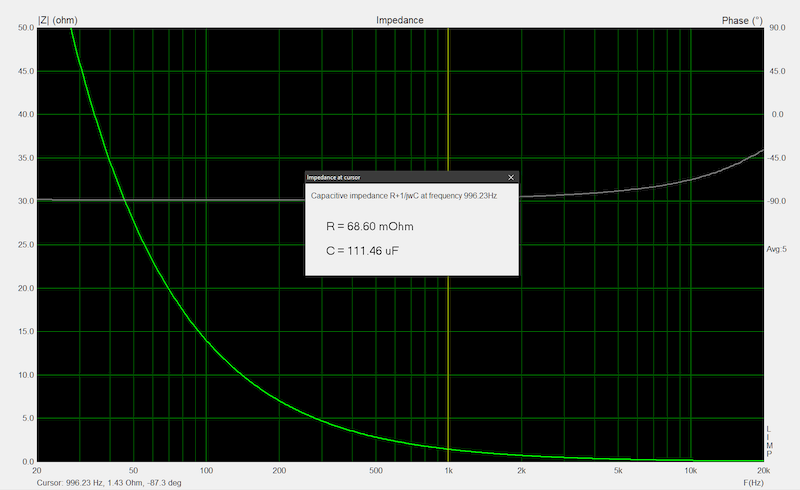 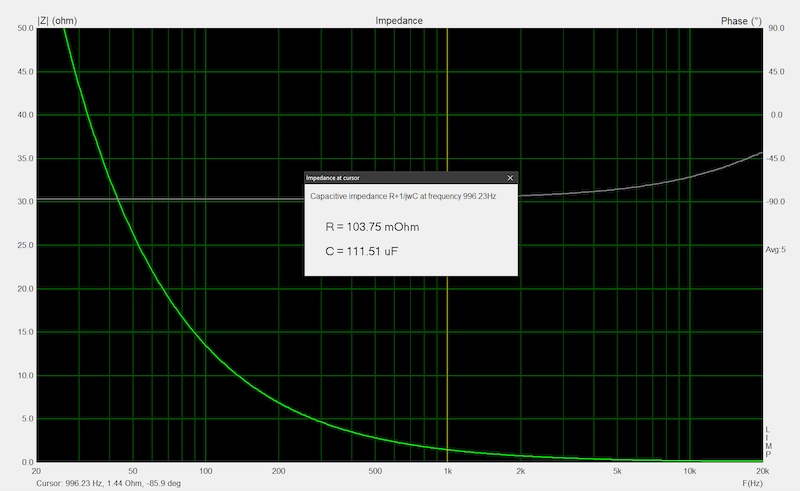 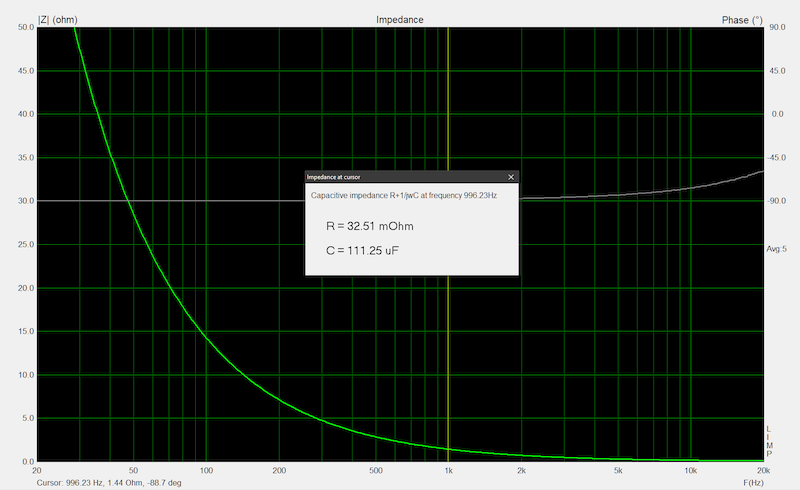 As already mentioned above, such high capacitance values in series to a chassis actually only occur with bass/midrange drivers.
For this reason, this test setup uses a midrange driver instead of a tweeter - the BMS 6S117 midrange driver. The driver was chosen because it has triple aluminum demodulating rings and therefore low distortion. This should make it easier to detect possible distortion caused by capacitors.
The rest of the test setup remains unchanged.

You know the drill... To be able to see the difference better, the diagram is normalized to the frequency response of the MKT capacitor and displayed with a scaling of 0.1dB.

Nevertheless, the deviations in the frequency response with a maximum of 0.1dB are so small that this should be practically inaudible when replacing the capacitor in the crossover in e.g. a 3-way loudspeaker.

d) Multiton Distortion - Film versus Electrolytic capacitor
Because people keep asking for it, here is the multitone distortion, which contain the harmonic distortion and IMD, of all three 111µF capacitor combinations from section c) in series to the mid range driver. 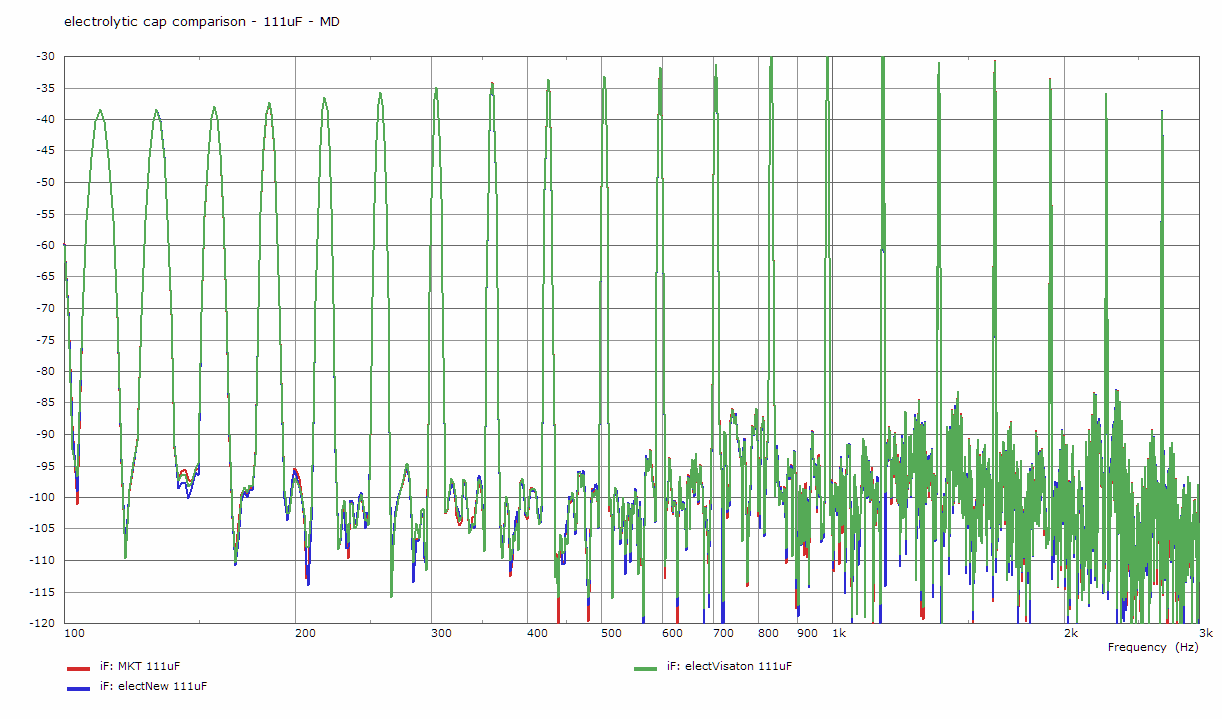 The distortion attenuation is sometimes more than -60dB (which corresponds to a distortion factor of less than 0.1%), and yet no different contribution of the capacitors can be seen in the multitone distortion.

However, the difference in sound pressure in the measurements shown is only 0.2dB in the worst case.
This is higher than in the first part when comparing normal film capacitors against a high-end capacitor, but in the end still insignificant (in most cases).

If the electrolytic capacitor is of good quality, durability does not play a decisive role either.

Only the high tolerance values of electrolytic capacitors and the possible change of the capacitance value over time could pose a problem. Especially when used in the tweeter crossover - this should be avoided.

Very important: according to these measurements a film capacitor does not make a better sound when used in the crossover compared to an electrolytic capacitor.

If you replace capacitors, especially electrolytic capacitors, with film capacitors in the crossover, without checking with an LCR meter, you will most likely notice a change in sound. However, 99% of the change in sound is only due to the different capacitances caused by the capacitor tolerances and not because the film or high-end capacitor "sounds better".

In my stock are four 100µF (+-10% tolerance, 35 VAC) Visaton electrolytic capacitors from 1985 (+-3 years). These were installed in a crossover for over twenty years and were in regular use. The last ten years they were stored in my stock and only used sporadically. 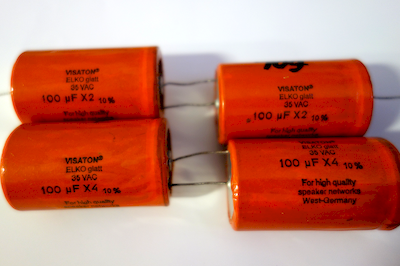 One of these capacitors was already measured in part c). Out of curiosity I measured all four capacitors. I am a bit surprised that at first sight all four are still working. 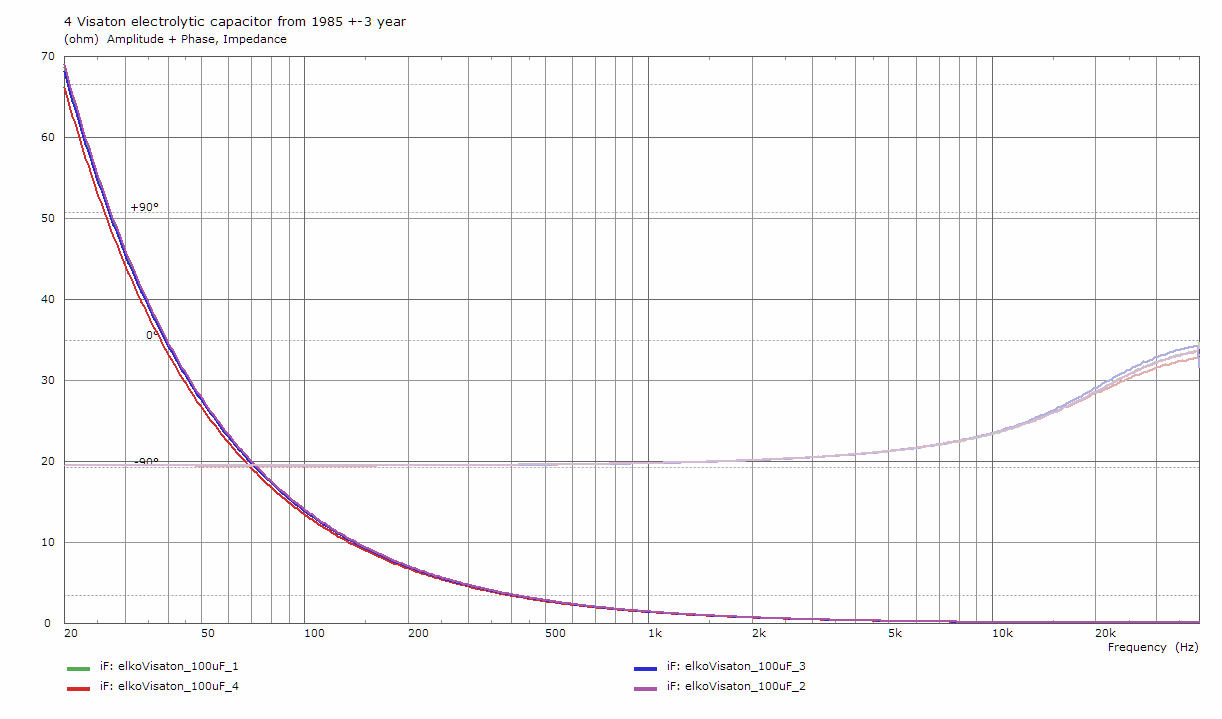 The measured [email protected] were between 111µF and 116µF. Thus all electrolytic capacitors slightly exceeded the permissible upper tolerance range. This is most likely due to ageing effects.

I can't say if the full dielectric strength of the capacitors is still given, but I haven't noticed any disadvantages even at high sound pressure levels when they were used in a crossover.

It is also clear that compounding capacitors doesn't help.

I often see it mentioned that coupling caps (those in series with the audio signal) that compounding (paralleling) helps.
It can't and this test shows it as well.
So if someone has a 10μ capacitor and parallels 0.1uF film cap this does not help for higher frequencies because it's impedance will always be 100x higher than that of the larger cap (in the considered audible range) so the vast majority of the current will always pass through the larger value cap.

Compounding caps DOES help with decoupling power pins but this is because this works in the MHz range (smaller value caps have lower ESR at higher frequencies).
People have a tendency to overestimate their hearing capabilities.
Use your ears to listen to music not as an analyzer.
S

Whenever I replaced electrolytics capacitors to film, speakers became overly bright, after some time I have to put back the original caps.
I guess every serious manufacture account for the original ESR of the cap, if replacing you should add a small resistor in series with the film cap, but IMO its better to design a new crossover than to just upgrade components.
OP
C

ctrl said:
Added a small section on aged electrolytic capacitors.
Hope this covers most of your wishes now - I've had enough!
Click to expand...
Hell of a job, thanks for taking the time to put in all this work. I’ve been DIYing speakers for a few years now so I’ve seen all the hubbub over different capacitors and their magical abilities. Nice to see some measurements
OP
C