This is a review and detailed measurements of the Canon S-50 wide directivity ("omni-directional") speaker. It was a venture from their UK division from what I have read (in early 1990s). Phil Ward tells the story well in this article: https://musicandmiscellany.com/2019/06/08/canon-audio-part-1/ . The S-50 was purchased by a member and kindly sent to me from UK.

As with most omni speakers, the S-50 has a very unusual shape: 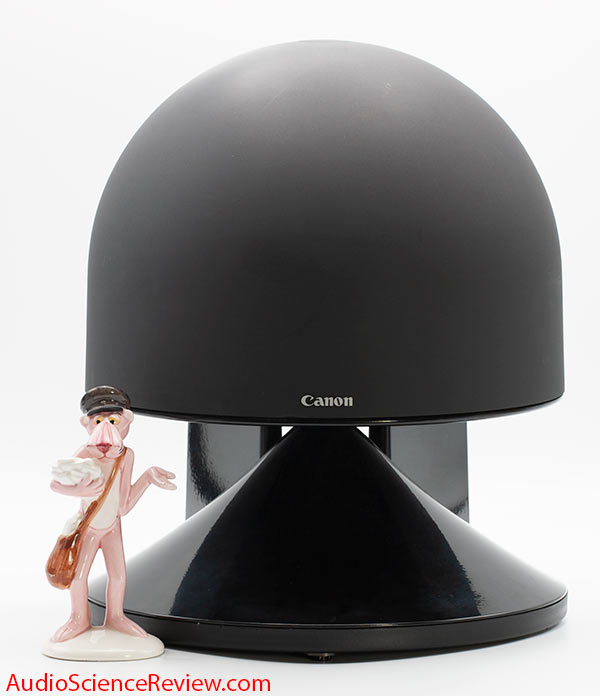 Yes, you can call it Packman speaker. Or Darth Vader helmet. I tend to think the latter.

They made a poor choice of putting the speaker terminals underneath which made termination and measurements a bit of a pain: 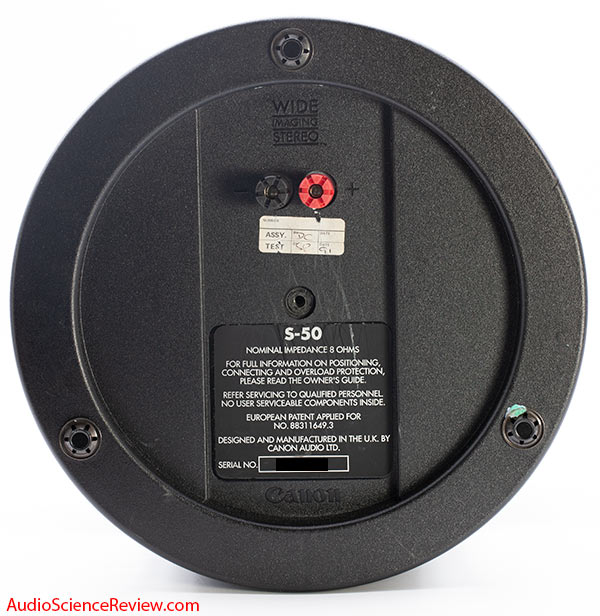 I have seen a stand in some of the picture so that may have helped with this problem.

If you want to peak inside, this is what it looks like with a down-firing little driver: 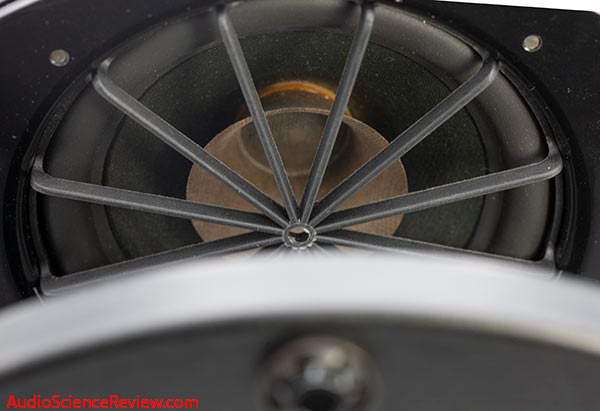 I used a relative high number of scan points (> 800) but it still was not enough to characterize the response above 10 kHz. So there is some error there. 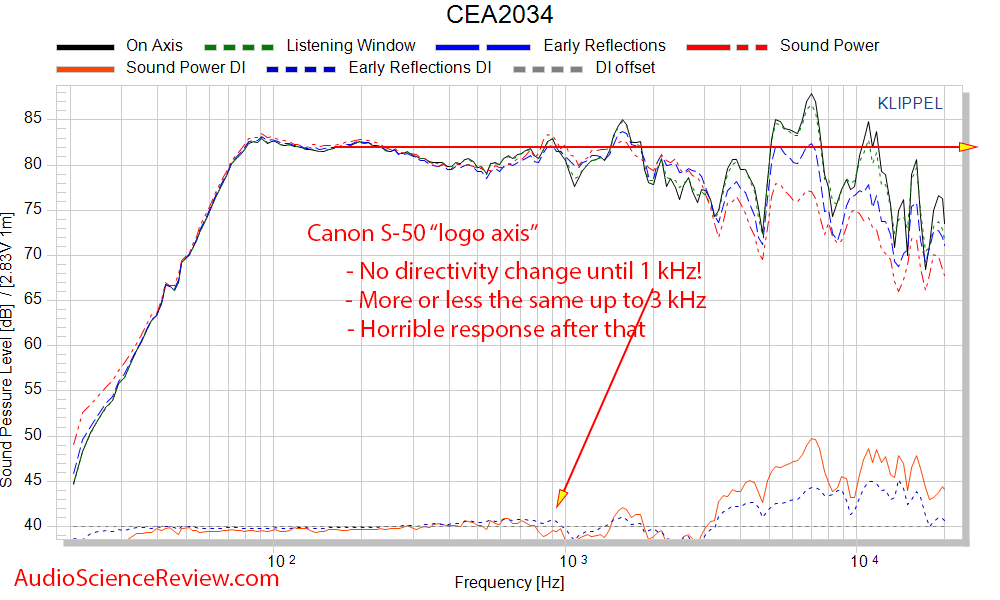 We quickly see that the speaker lives up to its definition if you look at frequencies up to 3 kHz or so. Sound power (red) is nearly identical to on-axis response!

After 3 kHz, bad things start to happen and with it, screws up the directivity as well. 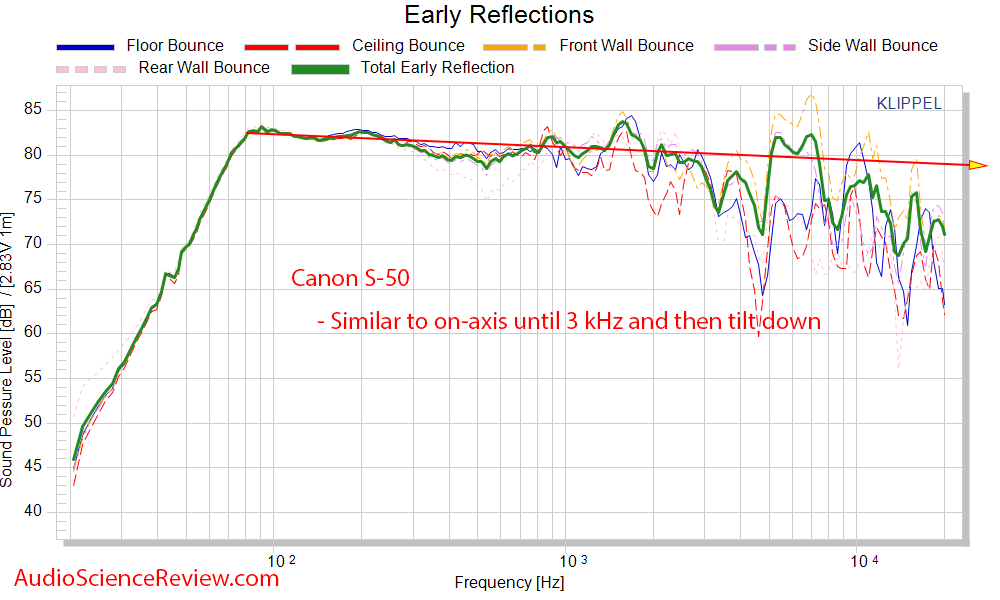 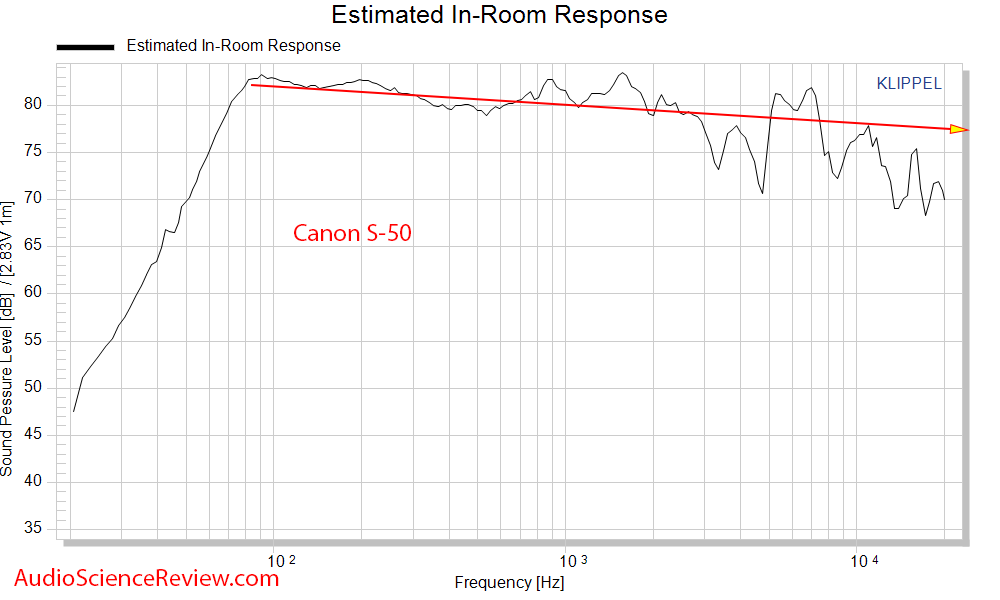 Examining the horizontal directivity in detail we get a better view: 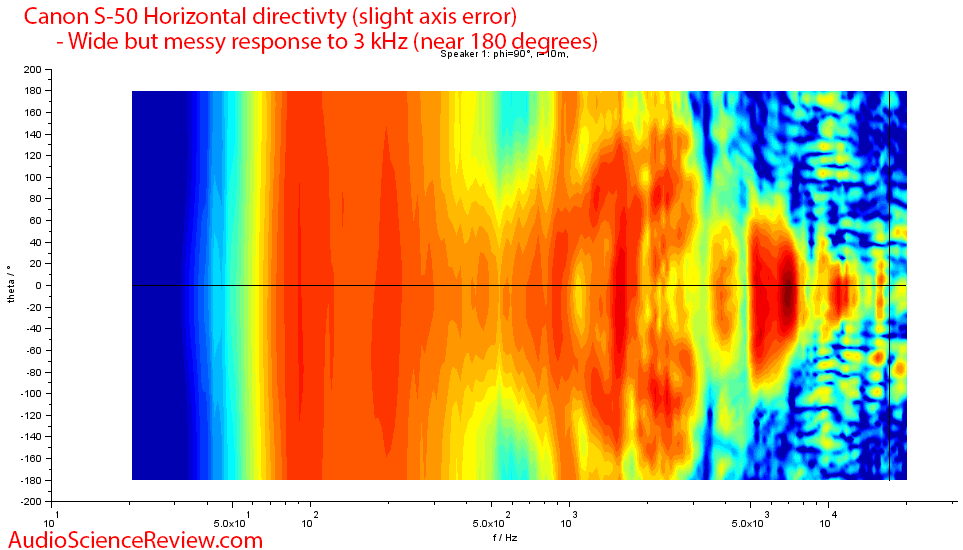 Even up to 3 kHz we get +- 180 degrees of dispersion indicating omni-directional dispersion.

Of course the details are quite flawed. We have a hole around 500 Hz and then wheels fall off the wagon above 3 kHz. Directivity narrows and response is very uneven.

Vertical directivity is also wide but much, much messier still: 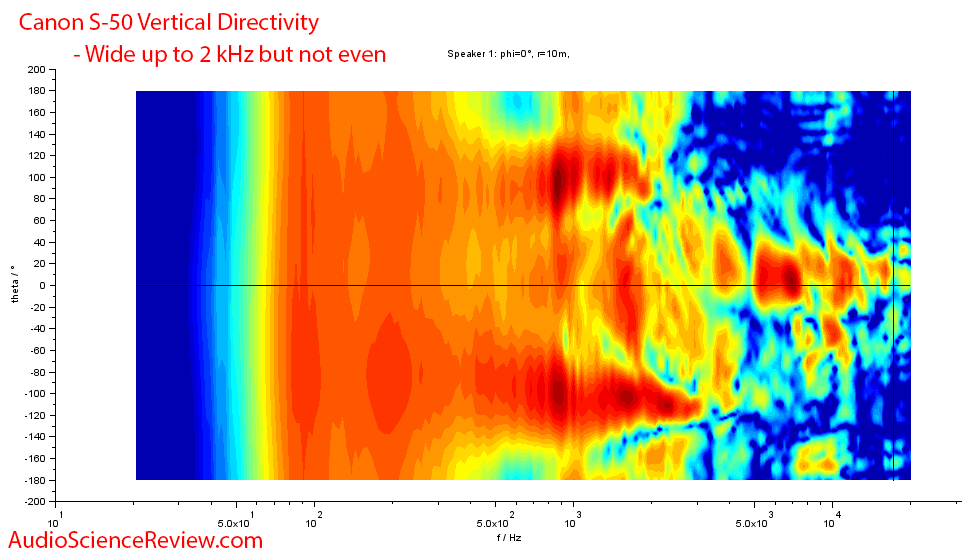 So I don't think vertically you get even response if you move up and down from speaker axis.

While on pretty colorful pictures, I thought I plot the 3-D representation of the soundfield at 17 kHz: 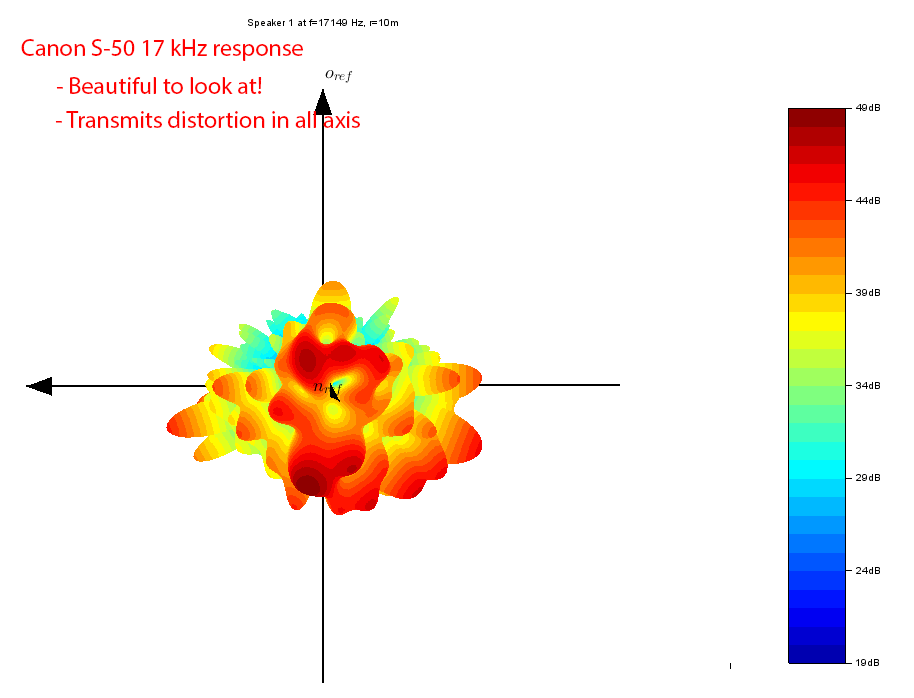 Stunning to look at! But not to listen to as it indicates so many resonances and problems distributed in space. No wonder Klippel NFS can't characterize it unless we measure at thousands of points. 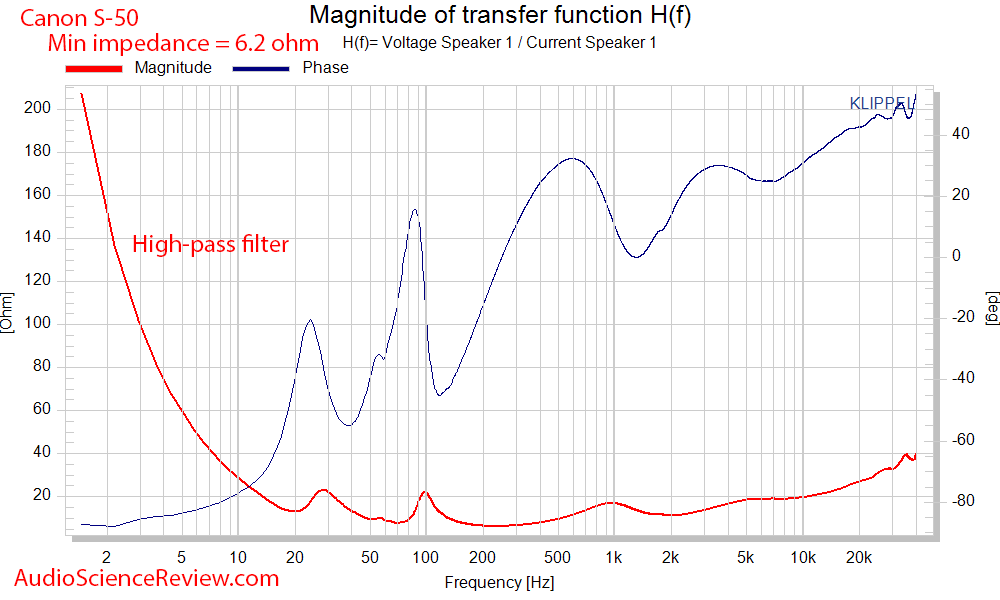 Distortion is off the charts in low frequencies but also problematic at higher: 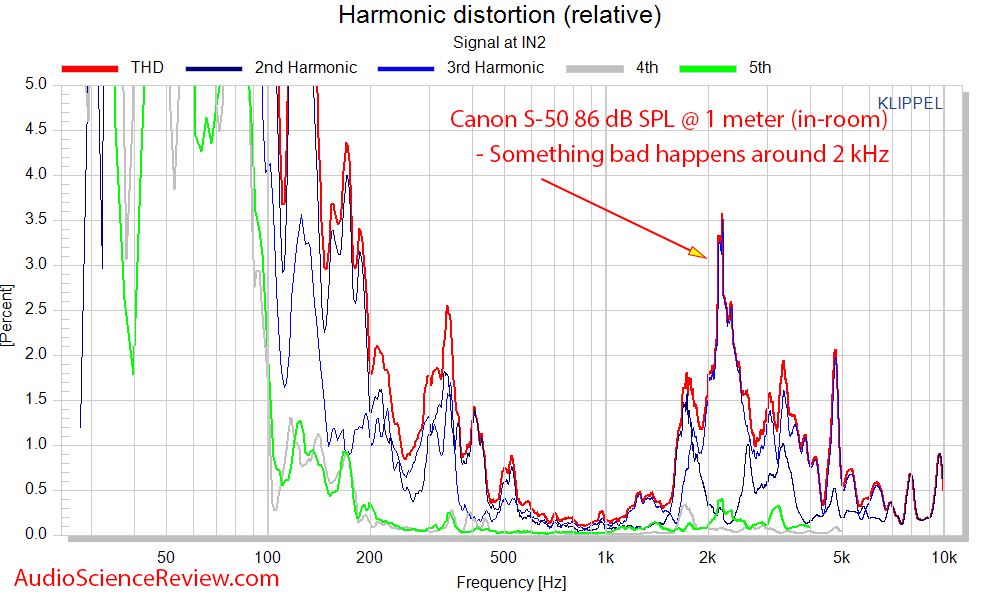 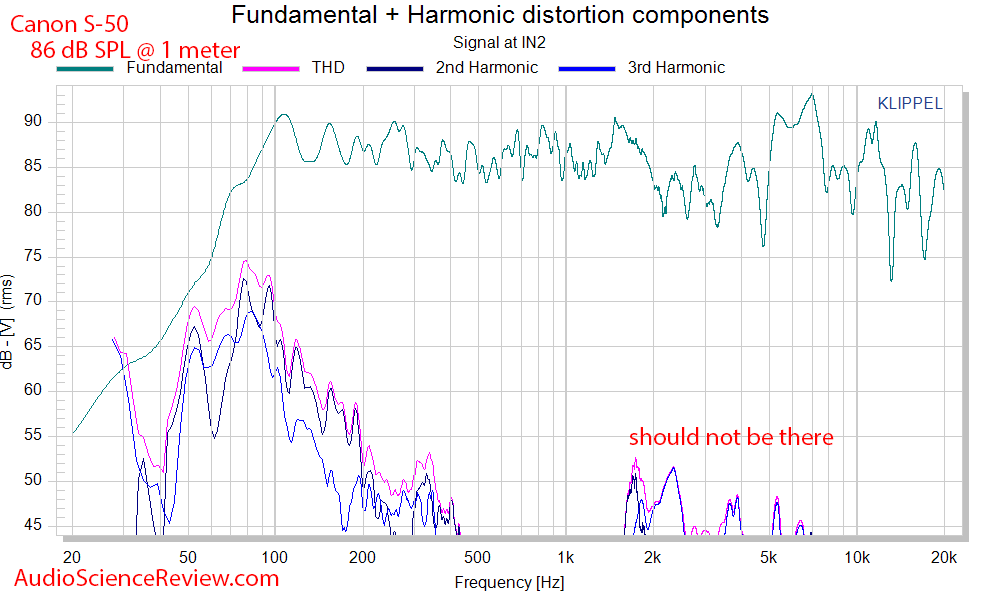 Speaker Subjective Listening Tests
I connected the S-50 to my system in the usual left corner position ( a few feet from walls). I was immediately greeted with significant distortion with every bass note. Turning down the volume helped a bit but the problem was still there.

I went to it and realized it was the "helmet" that was vibrating like crazy with every beat. I pushed down on it and it almost eliminated the problem.

I thought of sitting on it for the rest of the listening tests but got worried as to what might hatch under me.

So instead, I dialed in a high pass filter in Roon player: 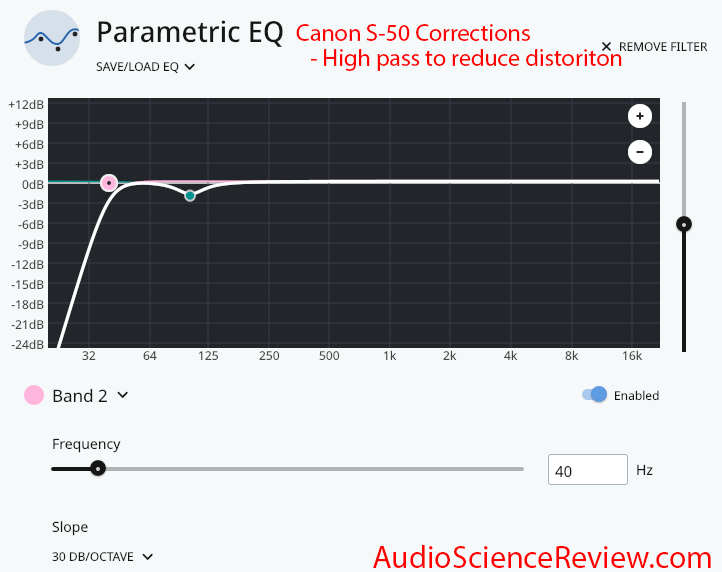 This was enough to give me the ability to turn up the volume reasonably to listen. Needs even more filtering for any real use.

Anyway, I went to town, avoiding my bass heavy tracks. Since you all keep asking me for my tracks, here is one of my favorites (both for content and fidelity despite its age):


Ah, boy did this track sound good! The wide dispersion gave it more openness, provide more of a "live" feel to this track. Anyone who thinks "reflections are bad" needs to get this speaker and play this track! No, it didn't add any echos. It just ever so slightly adds ambiance.

The high distortion did not let me enjoy many other tracks but as far as I could tell, it would add the same but more subtle version of the above to instrumentation tracks I played. Overall tonality was actually good.

I then went down to the speaker level and shifted 90 degrees to the side of the speaker. It was uncanny how the tonality overall did not change. This would be a great feature for background listening even in mono.

Vertical response in high frequencies was noticeable though with best response pointing right at the speaker.

Conclusions
Testing the Canon S-50 was a wonderful exercise in measurements and listening to something different. It is a good concept for some music but with highly flawed execution. Perhaps the higher ups in the line would not have had the problems this little guy has. If you can pick one on the cheap (I read some people buying them for $150 and such), it is very worthwhile from educational point of view, if not listening.

Installed the Burger King app on my phone to take advantage of the discounts they offer. Just got a notification that the Whopper is being sold for just $2!!! I am going to run out there and get one instead of quality/healthy food which would cost more. That is where I am money-wise. If you want this to change, please donate what you can using : https://www.audiosciencereview.com/forum/index.php?threads/how-to-support-audio-science-review.8150/ 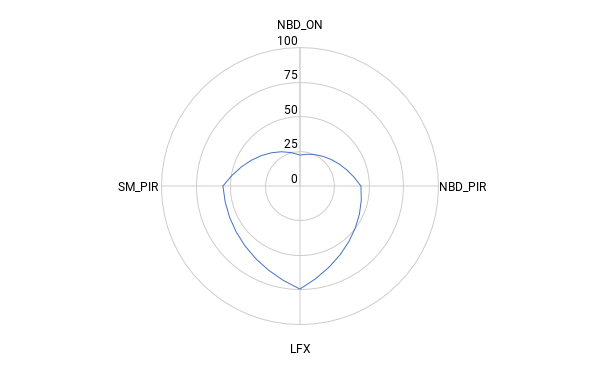 My speaker. Patent describing it here

MZKM said:
Preference Rating
SCORE: -0.1
Click to expand...
Brutal! I have to say it doesn't sound like -0.1 speaker. The equal weighting of high frequencies with others is a mistake I think in the algorithm. Response is actually pretty good up to 3 kHz or so.
Amir
Founder, Audio Science Review
Founder, Madrona Digital
Contributing Editor, Widescreen Review Magazine
Click for My Technical Background
Master List of Audio Reviews

With the backlog I suppose you have what's the point in measuring this 30-years old weird stuff?
S

amirm said:
Brutal! I have to say it doesn't sound like -0.1 speaker. The equal weighting of high frequencies with others is a mistake I think in the algorithm. Response is actually pretty good up to 3 kHz or so.
Click to expand...
I have had a sneaking feeling this was very much the case for quite some time. Now you have a data point that proves this particular deficiency in the preference score to an extent approximating reductio ad absurdum (hope I spelled that right, I doubt it!). Worth serious systematic study, IMHO.

This could make this testing of this speaker extremely significant.
Last edited: Jun 10, 2020
something's lost but something's gained in living every day--Joni Mitchell, Both Sides Now
G

amirm said:
Brutal! I have to say it doesn't sound like -0.1 speaker. The equal weighting of high frequencies with others is a mistake I think in the algorithm. Response is actually pretty good up to 3 kHz or so.
Click to expand...
It's a good thing Canon just focuses on optical equipment now.

Some additional details
- Made-in-UK, 130mm full range driver with a whizzer cone and AlNiCo magnet. It has an auto-protection circuit so the assumption is that the AlNiCo is still magnetized.

- the breakup in the upper frequencies is exactly the problem with whizzer cones.
- the patent explains why they did the whizzer cone because they thought that the height itself acted as a waveguide to maximize sounds going forward vs. lateral at the higher frequencies.

- Advertised as -3dB at 18kHz. Which might be true -- look at that last peak on the right. This really highlights the follies of providing the -3dB frequency response.

- Advertised as +/-2 dB for 100 degrees from 1 to 12 kHz for the dispersion.
- might be true with a lot of octave smoothing and since they're talking about dispersion rather than FR, potentially they are saying that for any given frequency band, the dispersion is +/- 2dB.
G

carlob said:
With the backlog I suppose you have what's the point in measuring this 30-years old weird stuff?
Click to expand...
I sent it in partially to see how the Klippel would deal with very complex sound field and as @StevenEleven has pointed out, this helps us push the limits of the preference score as we have seen a few outlier speakers with this being one of the best outliers.

It's in the name of science.

carlob said:
With the backlog I suppose you have what's the point in measuring this 30-years old weird stuff?
Click to expand...
Fun. I'm glad to see weird things measured, it's certainly more interesting than the 100th small 2-way with OK response reviews.

Curious review, but I would suggest to measure Apple home-pod instead. That one is at least available to buy and relevant to some people. Then again there are measurements already: https://www.sausalitoaudio.com/data/

SDX-LV said:
Curious review, but I would suggest to measure Apple home-pod instead. That one is at least available to buy and relevant to some people. Then again there are measurements already: https://www.sausalitoaudio.com/data/

Actually Harman Kardon Aura is also a similar design.
Click to expand...
If you've got either one, please send it in for testing!
OP

SDX-LV said:
Curious review, but I would suggest to measure Apple home-pod instead. That one is at least available to buy and relevant to some people. Then again there are measurements already: https://www.sausalitoaudio.com/data/

amirm said:
Homepod doesn't have analog input so a pain to test. Does the Harman?
Click to expand...
They are all bluetooth streaming
OP

What's causing the horizontal dispersion to vary above 3K?
G

@amirm , what you really need is to get someone to submit the Lexicon SL-1 for testing.
J

I had no idea Canon ever produced a speaker. While its measurements can be described as rather pathetic, it makes up for a pretty picture, which is more within Canon's area of expertise.
G

jam said:
I had no idea Canon ever produced a speaker. While its measurements can be described as rather pathetic, it makes up for a pretty picture, which is more within Canon's area of expertise.
Click to expand...
https://musicandmiscellany.com/2019/06/08/canon-audio-part-1/

If you 1/6 octave smooth and then look at estimated in-room response vs. the original Harman Curve, it doesn't look nearly as bad. 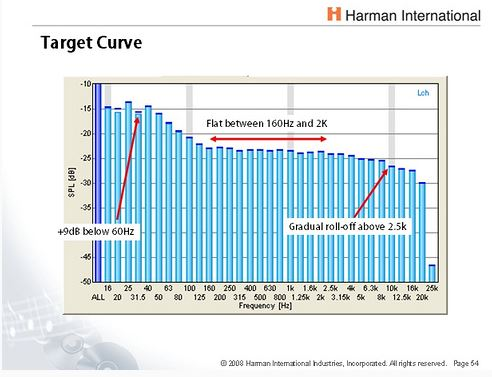 I have added the Canon S-50 to Loudspeaker Explorer where it can be compared to other speakers.

Good consistency within the… erm… listening window… whatever that is: 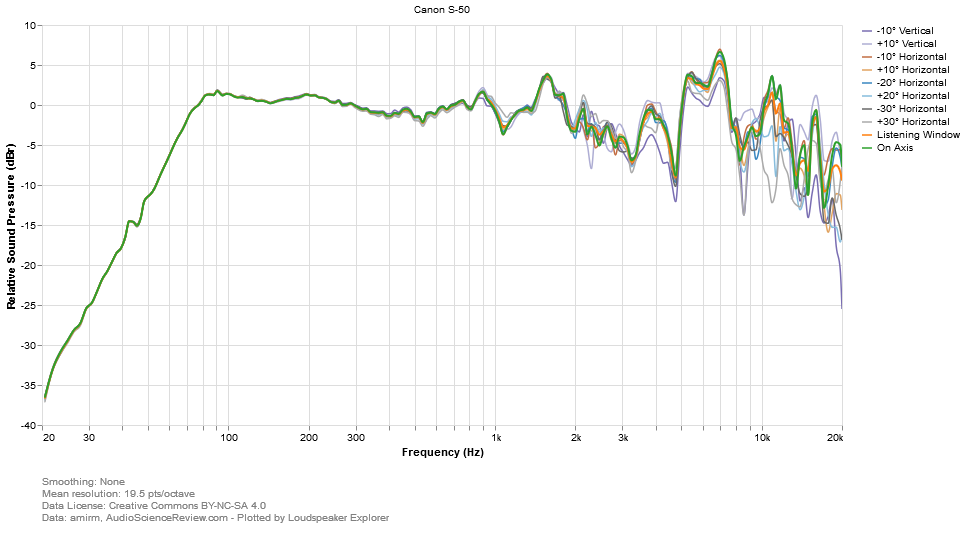