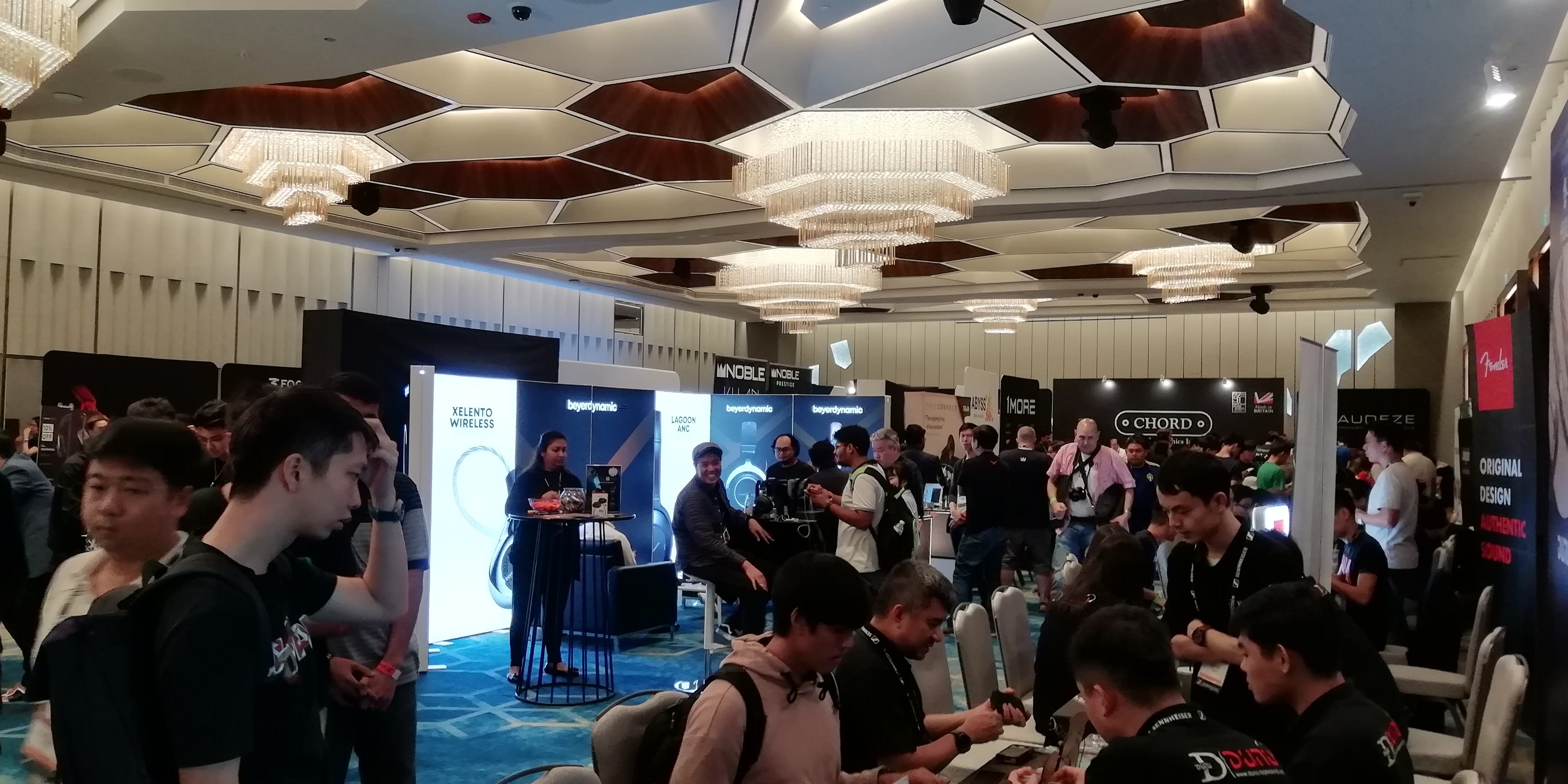 So I visited the Canjam today. The first for me so I had quite a few expectations from the event. Today was Day 1, and I thought I would take this day to explore the 'familiar' and 'known' side, to get an experience of how it feels to listen to stuff at Canjam. I took my 6XX and Sine for reference between listening sessions.

I will just go through the Cans/IEMs of significance I heard today, and a brief description of how I felt about them.

Starting with Sennheiser, I revisited the HD660s, HD800S and the HD820. I still hold the first two in high opinion, the 660s is truly the epitome of the line that the 580 started, and the 800s takes away whatever issues the 800 had, being an excellent performer overall. I heard the 820 for the first time today, and was seriously not impressed. My playlist felt honky, the soundstage felt as if its 'trying too hard', dynamics felt all over the place (my music was suddenly getting loud and then falling and it had nothing to do with the actual dynamics in the song, but more to do with the corresponding frequency it was at). All in all, Sennheiser still knows how to do open backs but I don't trust them otherwise. They also had the Neumann NDH20, which sounded like a DT1770 to me for some reason (though obviously audio memory sucks, that was the closest 'feeling' I had)

Beyerdynamic has gone to the dogs - They had only their fashion cans, their bluetooth stuff and IEMs. Ugh.

Moving on to Focal, I started with my favourite, the Clear, to 'cleanse' my pallete for what was to come. I avoid the Utopia(scared to fall into a pit that would make me long for them) . So anyway, I tried the Stellia for the first time, and man, I was disappointed - the hype had led me to believe it was something else, but seriously, NO(atleast for me). The Audeze Sine is still a better open back for me. The Stellia was doing something weird with upper bass and lower mids, something I simply cant lay a finger on but bothered me nonetheless. This was replicated by the Elegia as well, but atleast the Stellia had better dynamics and resolution, so the Elegia seemed like a 'Stellia Lite' to me.
I have always hated the Elear whenever I have heard it, so I was extremely surprised this time, that when I put it on, it was really close to my favourites, the Clear. I thought at first that they had replaced the usual pads with the perforated ones (to make it essentially identical to the Elex), but no, that wasnt the case at all. IT WAS THE ARCHE DAC+AMP ! I realised that when I was going to switch the Elear to the Elex, and they asked me to use the menu, go to amplifier settings and choose the correct headphone. The list had all the Focal headphones on it, and then, when I put the Elegia on with the Arche, it fixed a lot of issues on that as well ! I hope I didnt mishear stuff, I hope someone else also gets to audition the Focal Arche Amp with all the Focal headphones, it seems they are doing some DSP/hardware signal modulation customised to each of their headphones(all of them exist on the menu) and it brings even their poorer headphones to the level of the Utopia/Clear.

Next up was Audeze. I have had extensive experience with Audeze (they are my most expensive purchases afterall), so it was just a revisit as well as taking the opportunity to sample the top of the line. I heard the LCD3, the LCD4(4z as well), the LCD-X and the LCDi4. Something about the top 2 models just doesn't work for me - its probably that I do not like the 'dark' signature of the LCD family, of which only the LCD-X is the outlier. Therefore, contrary to popular opinion, I actually like the LCD X, though it has identifiably lesser resolution and finesse of the LCD4. The Tonality of the X just works for me.
Regarding the LCDi4, this was my first time hearing it - yeah, it is not worth the massive price difference from my iSine10. It is the same level of 'improvement' I noticed from the LCD2C to the LCD3, no its NOT WORTH THE PRICE PREMIUM. I can live without it.

The next booth was Mr. Speakers. I tried the AFC Closed/Open and the Voce. Didn't get to try any of the Ethers as they were occupied by other listeners. Again, contrary to popular opinion, I prefer the Aeon Flow Open to the closed (I am a weirdo, I know).
The VOCE is an exceptional headphone, but somehow it never made me feel the 'Electrostatic Magic' that I get from Stax. It felt similar to what Audeze does with its LCD4 - not a similar Tonality, more like 'best Mr. Speakers has to offer today'.

Kennerton - This table was rather busy because it was set up right next to ZMF's cans, so the only seat open was in front of the Vali. Honestly, I don't know what was going on in this. Disliked on first listen. Left that booth immediately after.

So this was all on the lower level, as you can see in the photo. I did go around to FiiO and Hiby to try their new DAPs, but my personal philosophy (which some of you might know) is that the source has hit hard diminishing returns over the past few years and getting a well engineered DAP for a reasonable price is all that you need. I tried the FH5 and FH7 and came away slightly disappointed. They weren't the worst, but not my cup of tea. The separation isn't enough.

On the upper level, I visited -

Campfire Audio - Tried both the Solaris and the Andromeda. Amazing technical ability, the Solaris adds that missing low end the Andromeda has, but IMHO, THEY DO NOT LIVE UP TO THE HYPE. Part of this also has to do with them being intensely source dependent (due to the impedance)- it worked great from their Questyle DAP, but the moment I tried my iPod/phone/Phone+SXFi/Shanling M0 , it simply didn't cut it. The separation of the instruments, the clarity was all overlaid by a 'haze'(or hiss ? veil? IDK what to term it as).
This reminds me of what another user had said before, the CA Andromeda might be amazing, but its just not for me. Ironically, I really liked the Orion, so much so, that I might consider buying them when I drop by tomorrow.

STAX - Stax had EVERYTHING CURRENT at the Canjam - The L300-700, SR007/009 and all their amps. Man, I love this brand- something just clicks for me. I spent some time enjoying classical music on them and moved on. These are definitely on my bucket list. For some reason, the SRM-353S+L300 seem to still be my favourite, I don't seek bass from Stax, I like the ethereal Detail. Just switch out the pads.

Speaking of more Electrostats, the Sonoma Model One was there and Martin Roberts himself sat at the booth demoing the cans. They are exceptional, no doubt - everything you can ask for in a headphone except for bass/subbass. But in more complex tracks, it seems to give something up- Soundstage is not the best, neither is imaging. Instruments start slightly overlapping (I suspect that this has something to do with the energiser)

Final Audio- Tried their IEMs, liked them. The Final D8000 was like a sister to the Meze Empyrean for me, arguably better than the LCD4 (in my opinion). These two have that visceral Planar Bass, comfortable fit (the Empyrean is miles ahead in this though) and that tonality that could make me sit and relax, forgetting everything else and get immersed in music.

Verum One - Sundara with bass done better. That's all I can say.

Side note - Weirdly, I saw no one else except Robb Watts and Jude who were there for their presentations, from any of the companies themselves. Maybe they were in the seminars because most of the booths(tables?) were manned by normal minions from AV One or other co reps.

Target for tomorrow - QDC, SR1a Ribbon Earphones and whatever I missed today.

Pls update on part 2 . I myself went to canjam yesterday but compared to you I was a hunt for IEMs so I literally spent all my time with IEMs and maybe just having a quick listen to other products. Wanna go for day 2 but sadly #nsboy so I can't go.
Edit= I also agree with you on beyerdynamics , I wanted to try their monitor line up e.g 1990 but it was sad they only had their general consumer products
Last edited: Mar 31, 2019

Azeendeen said:
Pls update on part 2 . I myself went to canjam yesterday but compared to you I was a hunt for IEMs so I literally spent all my time with IEMs and maybe just having a quick listen to other products. Wanna go for day 2 but sadly #nsboy so I can't go.
Edit= I also agree with you on beyerdynamics , I wanted to try their monitor line up e.g 1990 but it was sad they only had their general consumer products
Click to expand...
The T1.2 and T5p were there at the side stand just like last year.
You must log in or register to reply here.
Share: Facebook Google+ Reddit Pinterest Tumblr WhatsApp Email Link