Can you tell diode limiter distortion in the ABX test (sine, music)?

Please let me know if you would be interested to participate in the test with diode limiter distortion. BAT Schottky diode is connected in parallel to the output, behind 1k resistor. The resulting distortion at -2dB, -11dB and -21dB is shown in the following plots. The upper (left) channel is always the distorted one, the lower (right) channel is a plain loopback.

Here is the link to the test files - music samples
https://www.dropbox.com/s/x9jiu26haku8wpw/diodelimiter.zip?dl=0
Please download the file and then unzip, you will get 2 flac files. It is impossible to play directly from dropbox. 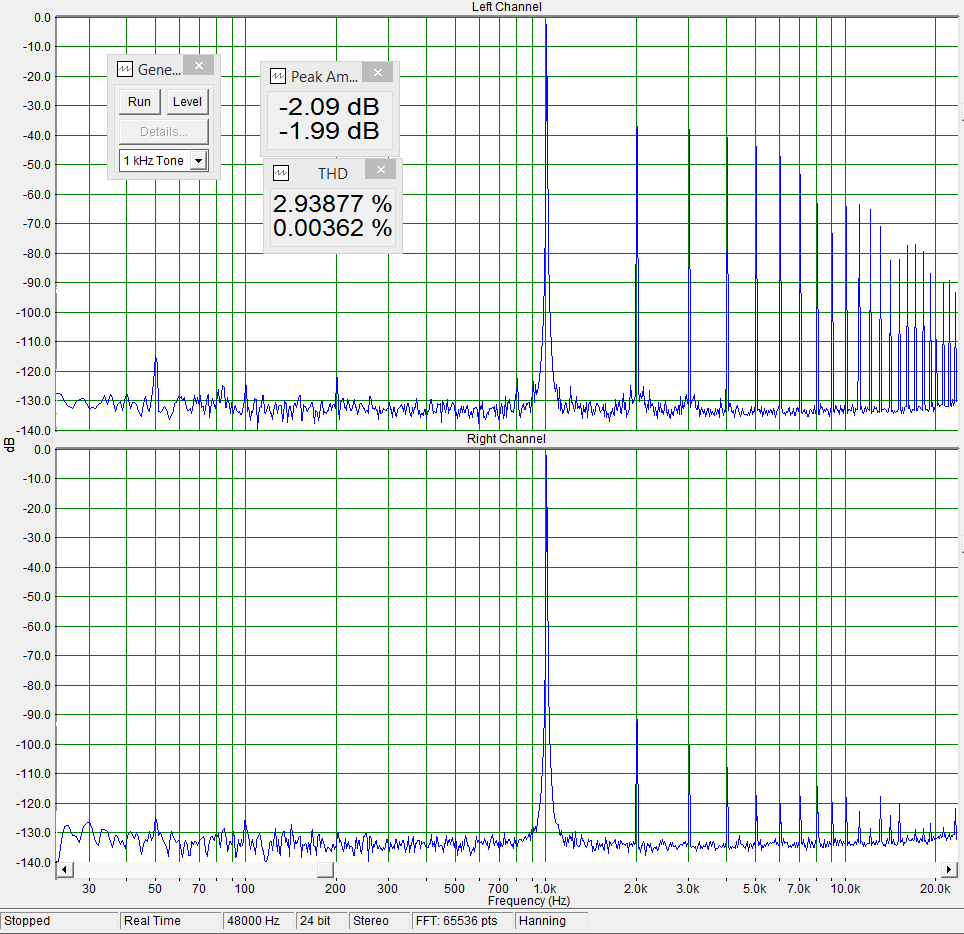 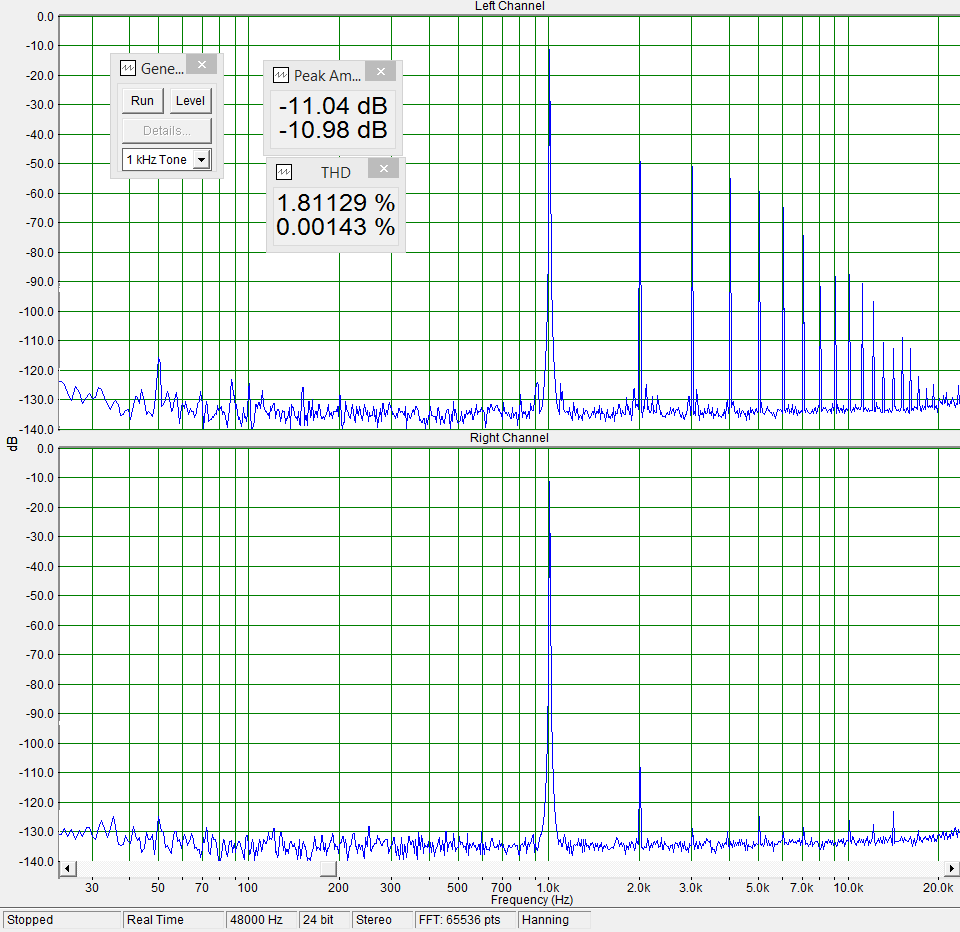 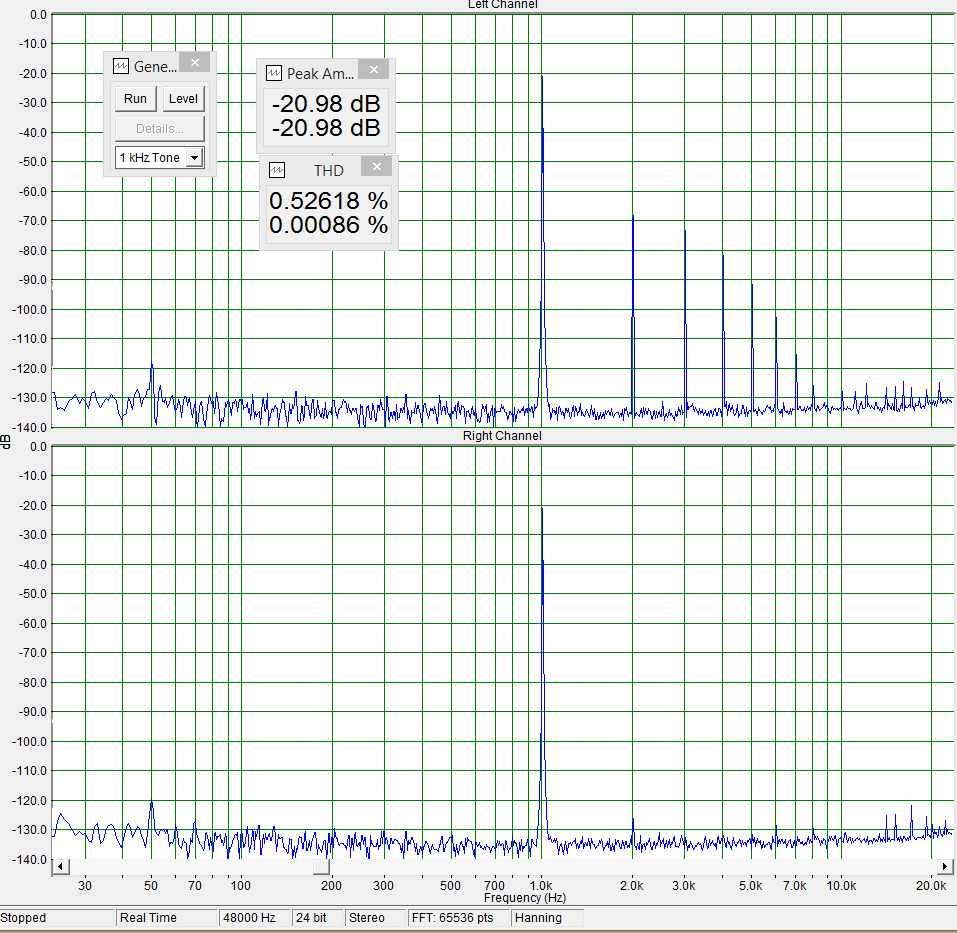 You outraced me, as I was just about to do the same thing. Actually I planned to use a series R + D accross the 100R output impedance of my RME, with the R dialed in so that the distortion is just a tad below (buried in) the normal loopback distortion, making it invisible. Then using the power of heavy block-averaging prior to diff'ing the signals with the circuit in vs out, to make it visible/audible.

Not the same kind of test of course, nothing will ever be heard in my test. In your test, probably nothing will be heard either, as I found static distortion is always audible quite benign.

Therefore I'm thinking of a dynamic distortion circuit, adding a C//R in series with the D+R shunt. That would change the bias voltage the diode is shorting to, depending on the signal and its history.... in a sine distortion test, the measured distortion would be quite low as the cap remains charged. In a large-period IMD, notably one optimized for high crest factor (all components starting with zero cosine phase) the distortion would be higher, and with real music tracks it will be rather high.
OP

Thanks! Let's hope that something might be heard, this is the shot of the original and limited file. I will post the test files.

I was faster than expected Here is the link to the test files
https://www.dropbox.com/s/x9jiu26haku8wpw/diodelimiter.zip?dl=0
Please download the file and then unzip, you will get 2 flac files. It is impossible to play directly from dropbox.
my audiopages
OP

This time it is really easy, if you concentrate on sibilants. So again, transients!! Distortion spectra in isolation do not tell the story.

Thanks! Let's hope that something might be heard, this is the shot of the original and limited file. I will post the test files.

Wow, that's a lot of clipping over large parts of the whole waveform... well that should be audible...

The distorted vowels of the voice (at 0:37 for example) were a dead giveaway for me, so its not just transient alone.. no ABX needed on that ;-)
OP

KSTR said:
The distorted vowels of the voice (at 0:37 for example) were a dead giveaway for me, so its not just transient alone.. no ABX needed on that ;-)
Click to expand...

I mean that from distortion spectra of the sine wave I would not assume such severe clipping in one polarity. This says that one kind of plot analysis is not enough to predict the effect. Similar distortion got regularly from tubes does not result in same audible effect . That's why audio is so exciting.
my audiopages

Yep, exactly. In this case, the (seldomly shown) phases of the distortion components matter as much as the magnitudes do, in the simple sine THD measurement, as that decides what the actual waveform looks like. At some point @pkane might implement adjustable phases in his distortion generator so this can more readily investigated.
Simple scalar steady-state metrics like THD (and SINAD) are useless, which is what we both know, but others may not.
OP

Just for fun, these are the sine waves according to this profile https://www.audiosciencereview.com/forum/index.php?attachments/diode_-11db-png.110851/ , clean loop vs. diode limiter, 1kHz sine

P.S.: the transient part of the diode limiter response is during about 0.4s, if you look at the time series. It is because of the time constant associated with the low frequency HP cut-off. The diode connected behind the series 1k resistor would normally limit only the negative part of the wave. However, as the output coupling is through an electrolytic cap, the DC disappears with the HP cut-off. This also affects the distortion, which is highest at the beginning. This also explains why music sample is highly clipped and distorted. Nothing is as simple as it looks at first sight . 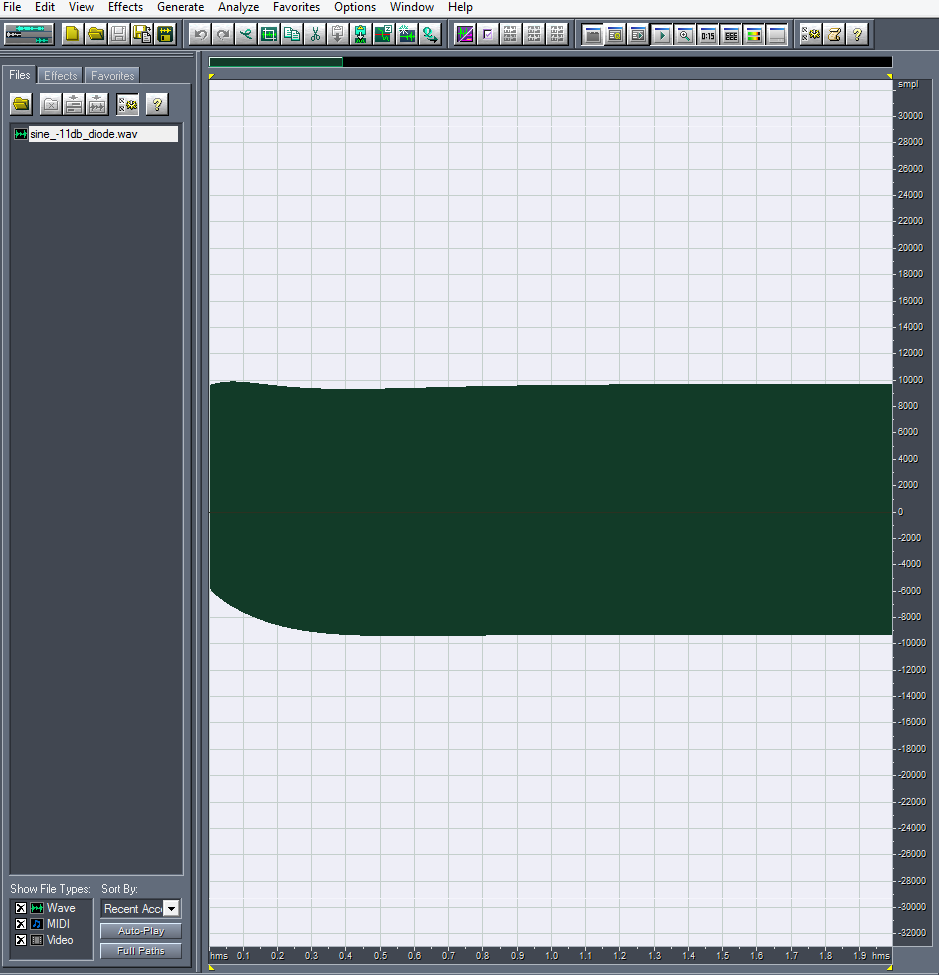 Distortion vs. amplitude [V] of the loop and diode limiter path. Please note how early the diode affects distortion. 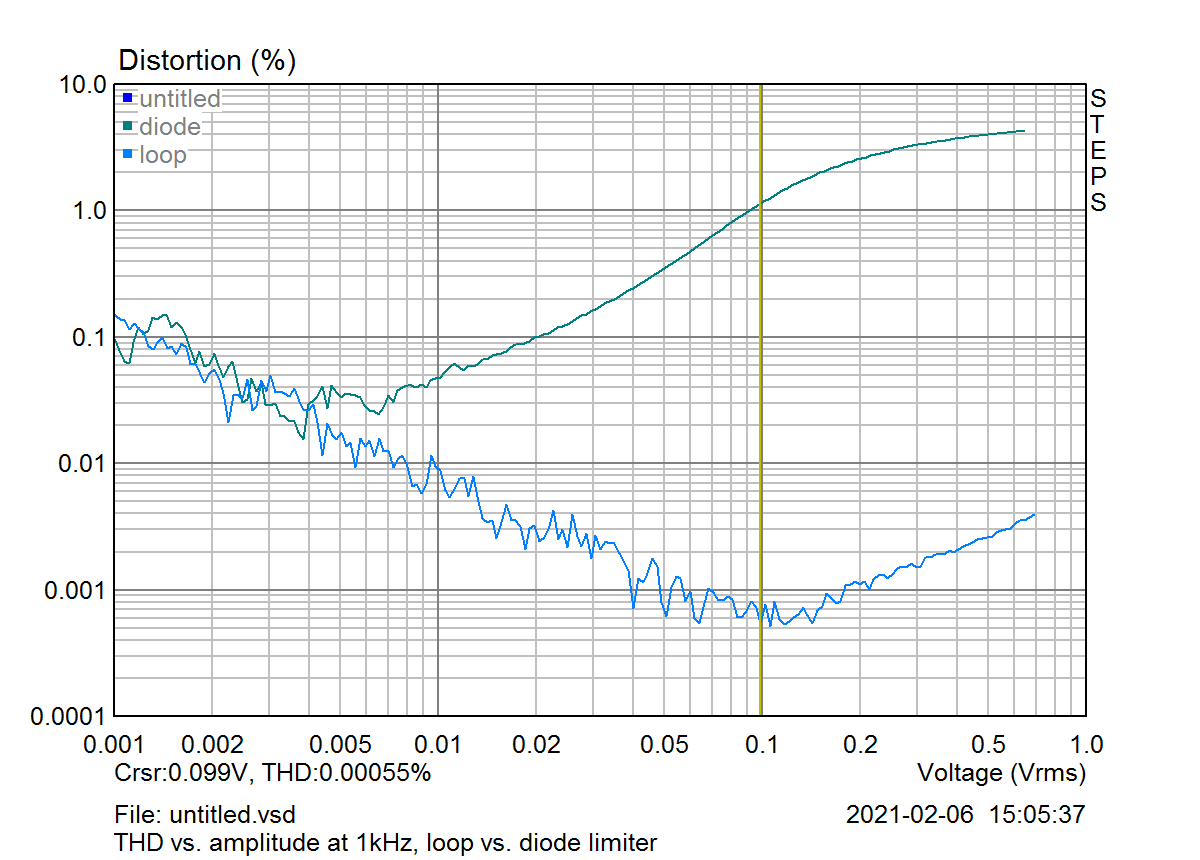 pma said:
I was faster than expected Here is the link to the test files
https://www.dropbox.com/s/x9jiu26haku8wpw/diodelimiter.zip?dl=0
Please download the file and then unzip, you will get 2 flac files. It is impossible to play directly from dropbox.
Click to expand...

This is the difference file, loop - diode limiter. Just to bring an idea how "nice" is the sound of "euphonic" distortion .

The most revealing test for this kind of non-linearity, i.e. one polarity limiter, seems to be the multitone test. THD did not tell much, as we already had listening tests with similar THD here, like this one
https://www.audiosciencereview.com/...-world-tube-preamplifier-about-2-7-thd.18392/
that did not bring reliable positive ABX results. 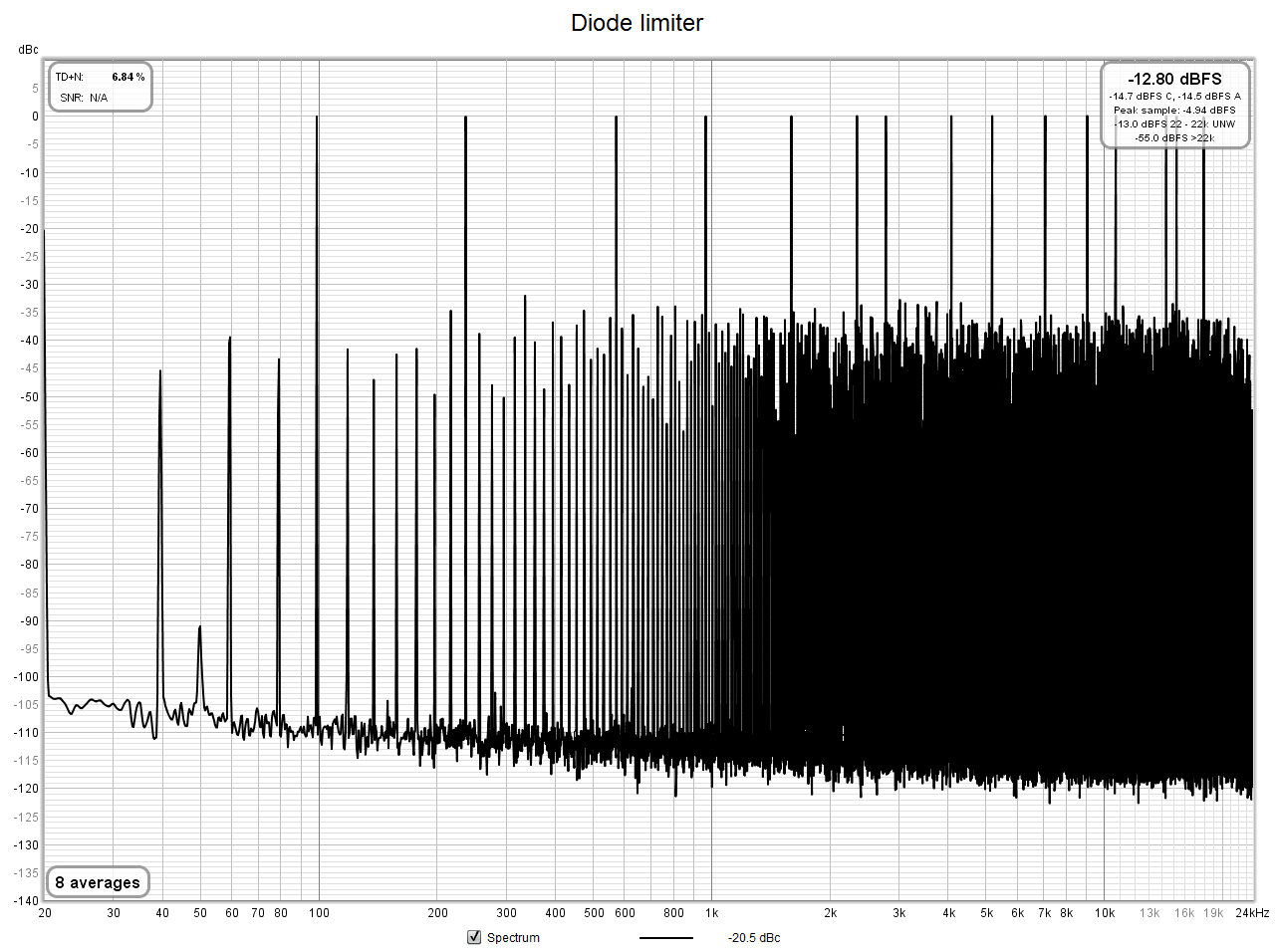 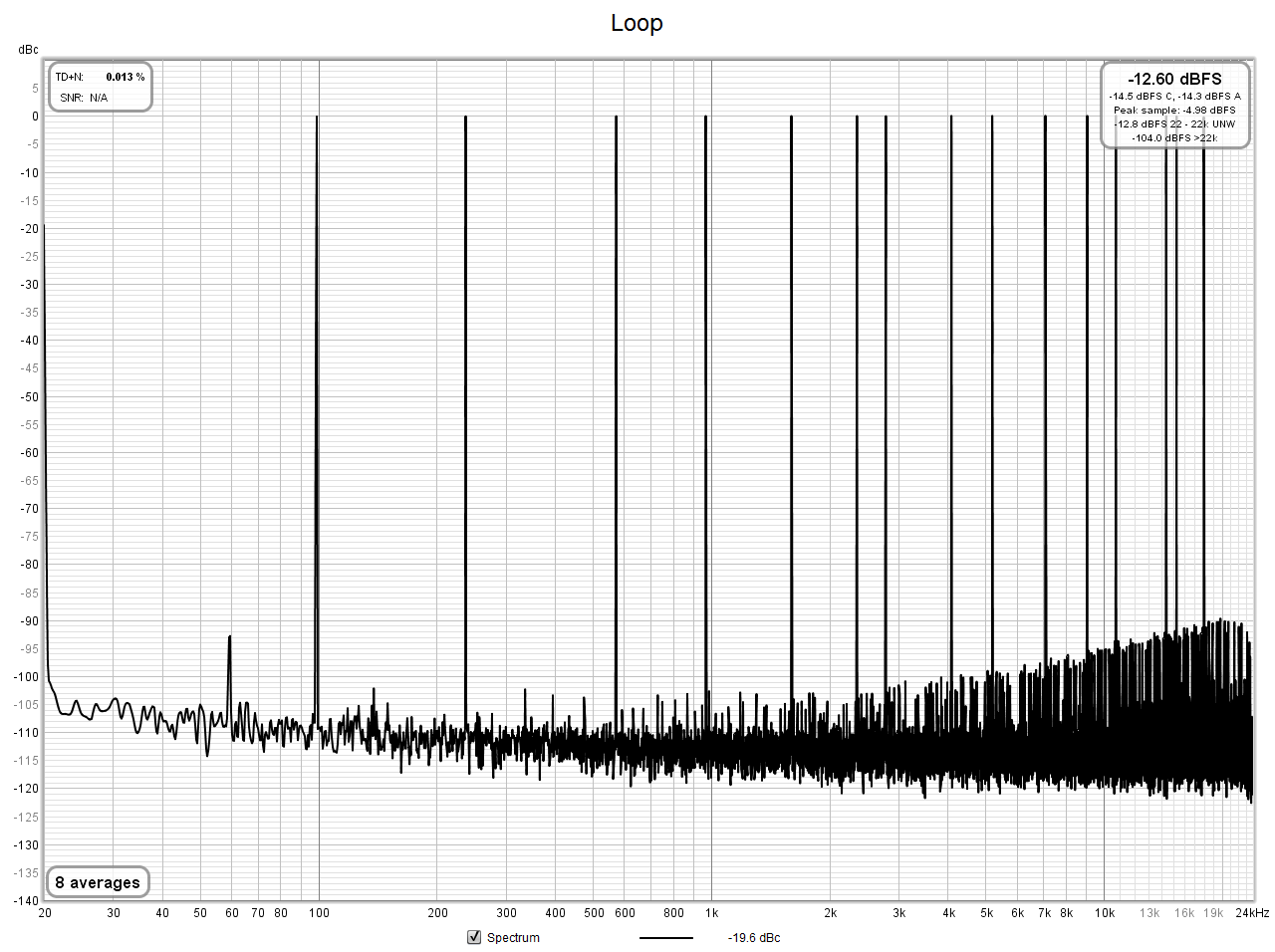 my audiopages
You must log in or register to reply here.

Can you hear a 1kHz sine wave distortion of 0.85% from tube preamplifier
2 3

ABX distortion test on a real-world tube preamplifier, about 2.7% THD
2