Can you pass as a British Citizen?

Cosmik said:
That's a new word for me. But I don't seem to be able to find it in any dictionary...
Click to expand...
It is a Greg Palast term

We can't define ourselves as the "anti-Bush," blindly supporting those he opposes, and thereby letting the nitwit Napoleon in the White House pick our enemies for us. Nor can our revulsion for Bush's horrors throw us into the arms of swamp-things like George Galloway.

Don't get me wrong. Unlike Hitchens, I cannot support the Prevaricator-in-Chief, the President who ordered Cindy Sheehan's son, Casey, to march to his death in Najaf. But I'll be damned if I'll cheer some rich white Brit-hole who brings joy to those who killed him.
Click to expand...

I passed with 21 out of 24 correct! Whoopee! Missed the cricket one (I chose horse race) lol I hate sports, the patron saint one (atheist here lol), and the Nobel prize for literature winners.

Pass with 20 out of 24. If a similar test were given to qualify as a US citizen, I think there would be a mass exodus.
========
“Music is the tonal reflection of beauty.” ― Duke Ellington

I passed, but as a fair dinkum Aussie, I asked myself “who cares?”

23/24, but I don't think the questions reflect modern British life very well, more that the government seems to be in some kind of colonial fantasy when the empire ripped off the rest of the world

22/24. Does this mean I have to regrow my foreskin?
“Emergencies” have always been the pretext on which the safeguards of individual liberty have eroded.”
― Friedrich Hayek

SIY said:
22/24. Does this mean I have to regrow my foreskin?
Click to expand...
Not if you are Jewish or Muslim.
J

I tend to think that people are often a lot more switched on than politicians and the media like to believe and concern themselves with stuff which is slightly more relevant to their lives than the stuff governments dream up. Not that there is no shortage of dim people, but it is a standard staple of the outraged to feel good about how much more clever they are than the great unwashed. Not that I'm a cynic or anything.
I used to fly, but I go the modern way now, by bus.

as someone said - mostly common sense:

Your result
Pass
Congratulations, you’ve passed! You got 23 out of 24 correct.

it does help to be a fan of the BBC shows on PBS...

23/24. I liked the one about being expected to support your local pub.

I had to pass the Australian a few years ago.

ps. growing up/living in Canada ( a former British colony ) helps with these tests.

Your score: 9 / 10
You passed!
A score of 75% is needed on the citizenship test to pass. Welcome new Australian citizen! 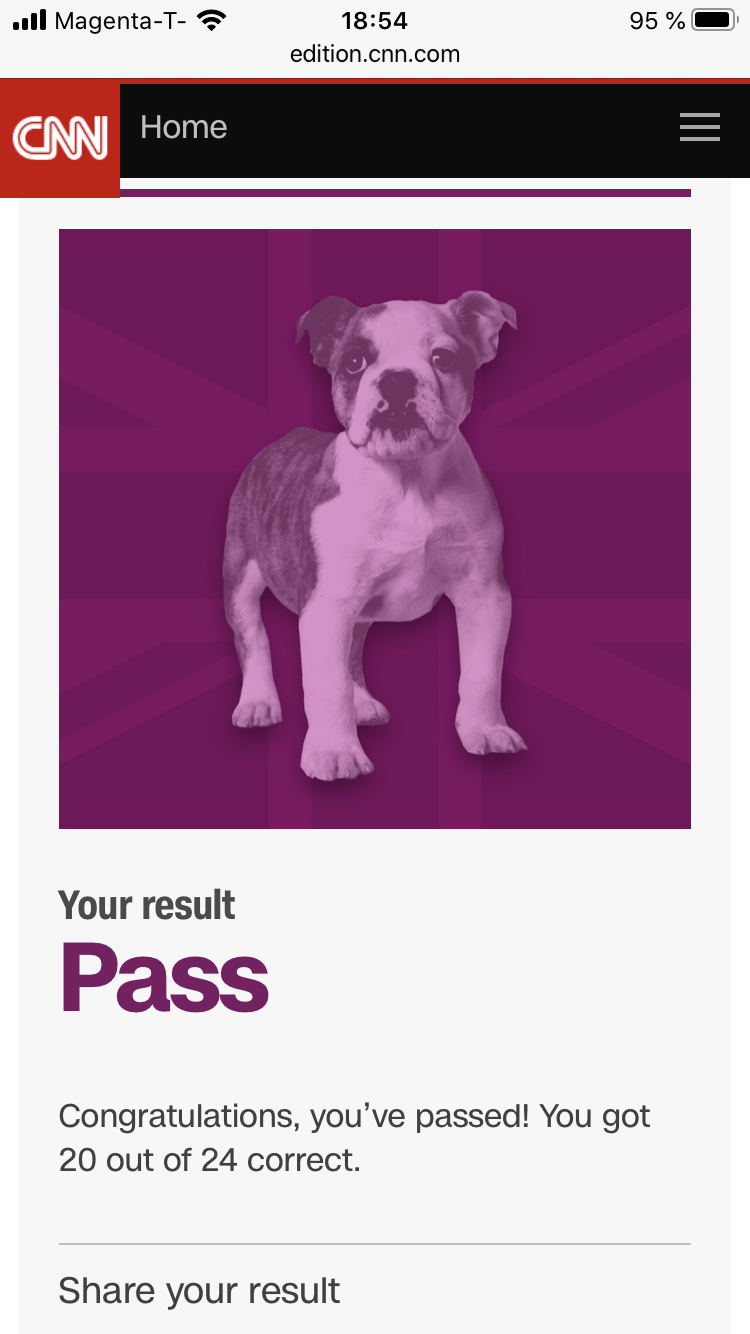 To be honest we'll let anyone in if they donate enough money to a political party.
B

I got the question about dog walking wrong and one about British values or something. They never had any values when I lived there so it's certainly gone downhill in the last few decades ...

if you pass the test, do your teeth fall out?