Can anyone MEASURE the multichannels in a loud movie?

The idea keeps coming up that surround channels need "less power" than the front LCR, because
(1) The average power is less --> I say this is irrelevant because it is actually the PEAK levels that clip the amps
(2) All the channels never peak at the same time. Many say no, some including me say they surely do sometimes. Never any EVIDENCE except for one movie mixer who once posted yes they surely do.

Is anyone set up to be able to MEASURE this for scenes like when the semi is crashing everything along a street in Terminator 2 and similar?!? It would be wonderful to have actual DATA posted.

https://beqdesigner.readthedocs.io/en/latest/ was written to support this (for beq purposes), generally it's true that the surrounds are often lower level while also being true that they still invariably peak at similar levels. Beq threads on data-bass have some graphs showing this though it's easy to make your own (assuming you have the track ripped)
OP
H

I don't have anything ripped here, nor any disc player connected to my Macs. OK full discosure I do have an old iMac with a disc drive. I just don't want to spend the time downloading and setting up and figuring out, too many other things going on with work and house painting. I assume/hope others are already set up to do this. I'll look at data-bass

an example to illustrate, the gas station attack scene in terminator salvation. Average signal level across the scene. It's how things commonly look (C louder than LR which are louder than surrounds). 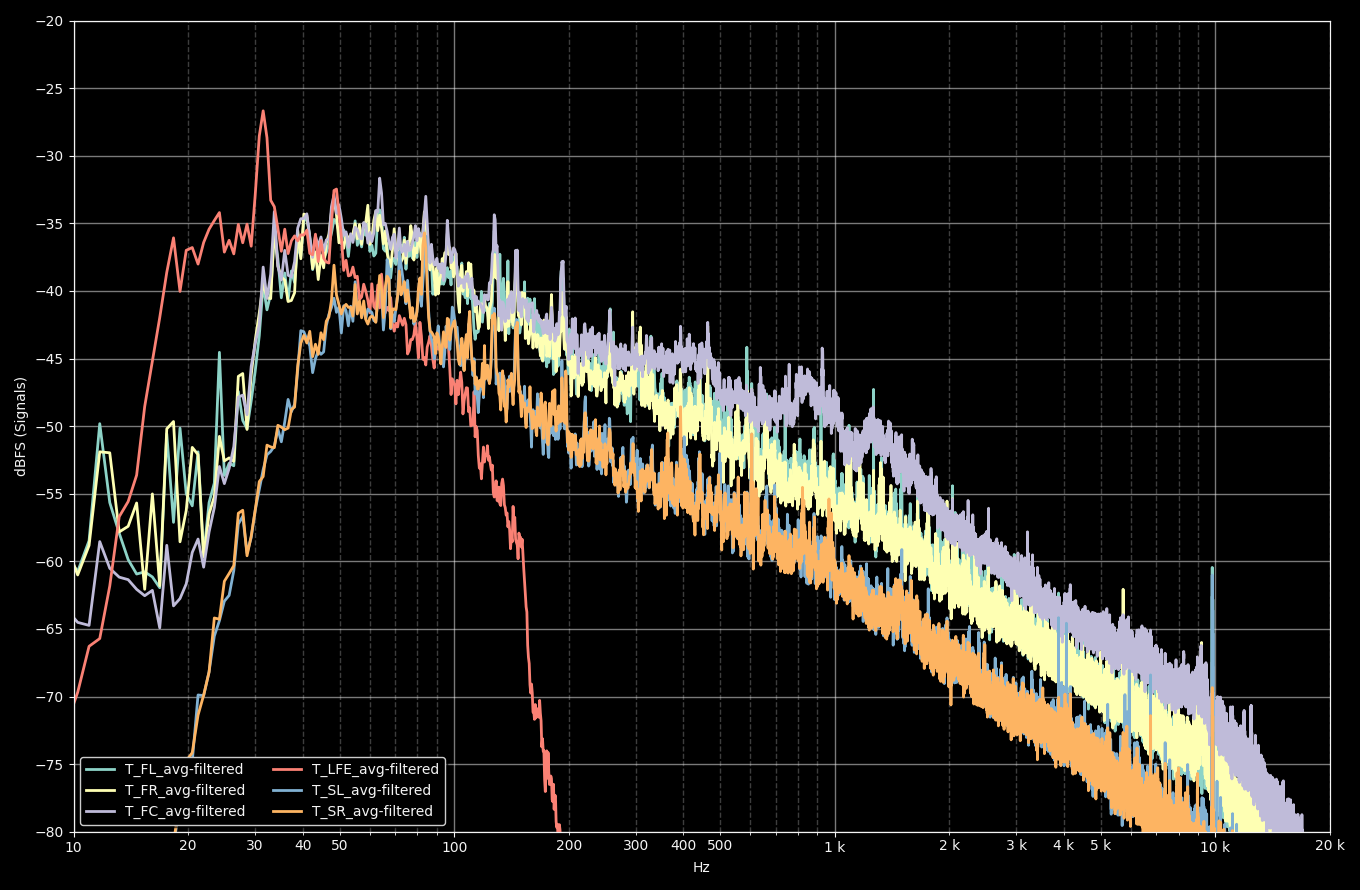 3ll3d00d said:
an example to illustrate, the gas station attack scene in terminator salvation. Average signal level across the scene. It's how things commonly look (C louder than LR which are louder than surrounds).

That looks to be about what people have described. Center louder by a bit, and surround abouts 10 db lower than fronts.
K

In terms of channel calibration, surround channels are 3dB down in the cinema environment.

So if that was preserved in the transfer to home presentation, the maximum possible surround level would 3dB lower than mains, as the surround tracks would have been lowered 3dB in the transfer. Same any noise burst that was "equally in all channels" in the cinema mix.

You see something like that in the graph above.

(To be more precise, home calibration puts all the channels at equal level, usually aiming at reference being 85dB = -18dBFS, peak 103dB. In a cinema transfer you wouldn't see more than 100dB in surrounds, due to them being calibrated as 82dB = -18dBFS in the original track.)

one more example which covers the entire soundtrack of No Time to Die, same pattern though bigger gap between channels in this one (and this different holds if you look at peak levels rather than average btw so it's not just that it's on average lower, it's consistently lower). 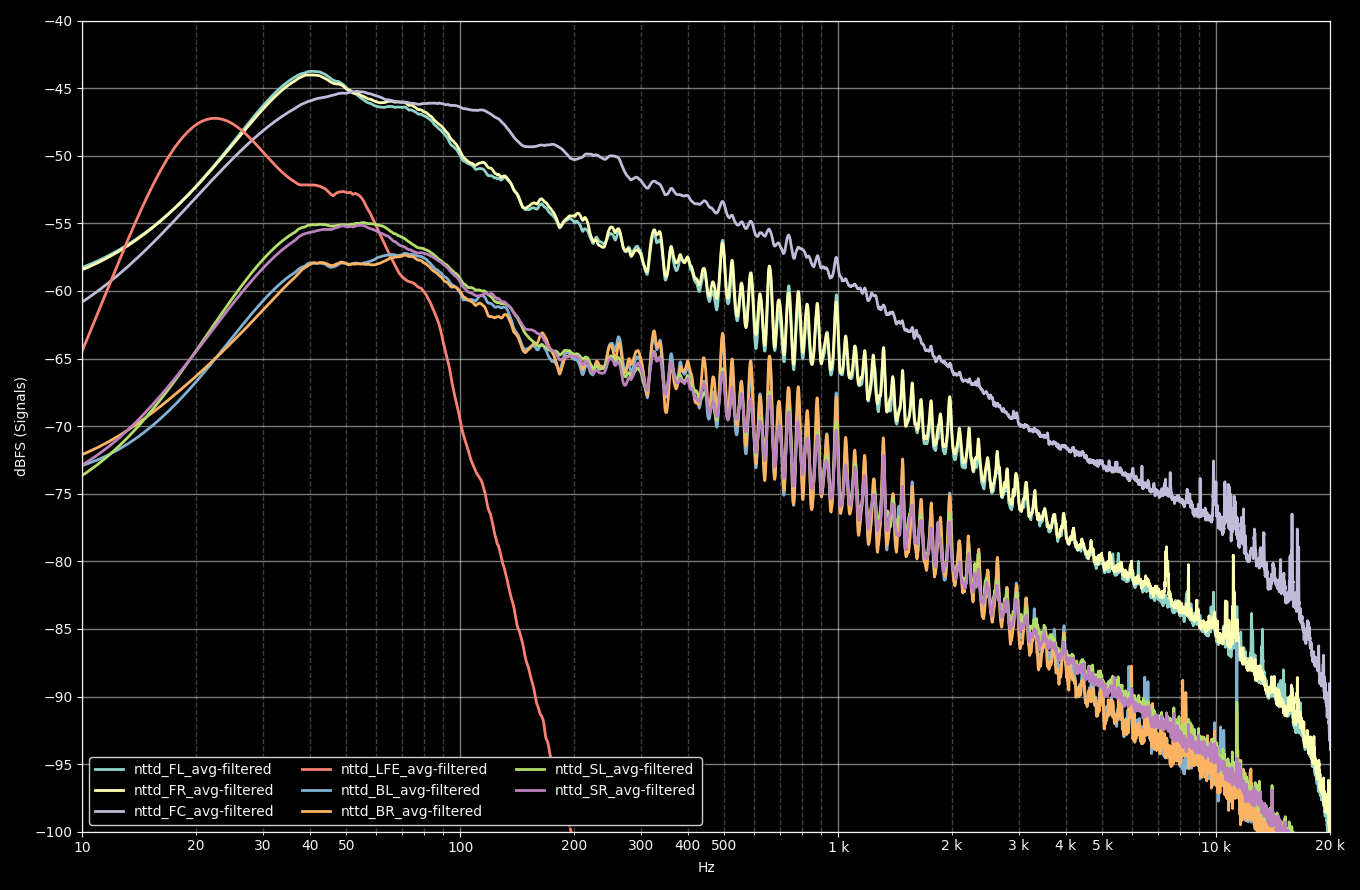 Try the movie U-571. Theres depth charge explos that reach 0dbfs (max level) on all 5.1 channels. We watched it in the mix theatre and had to check levels with the meters because is was so loud. 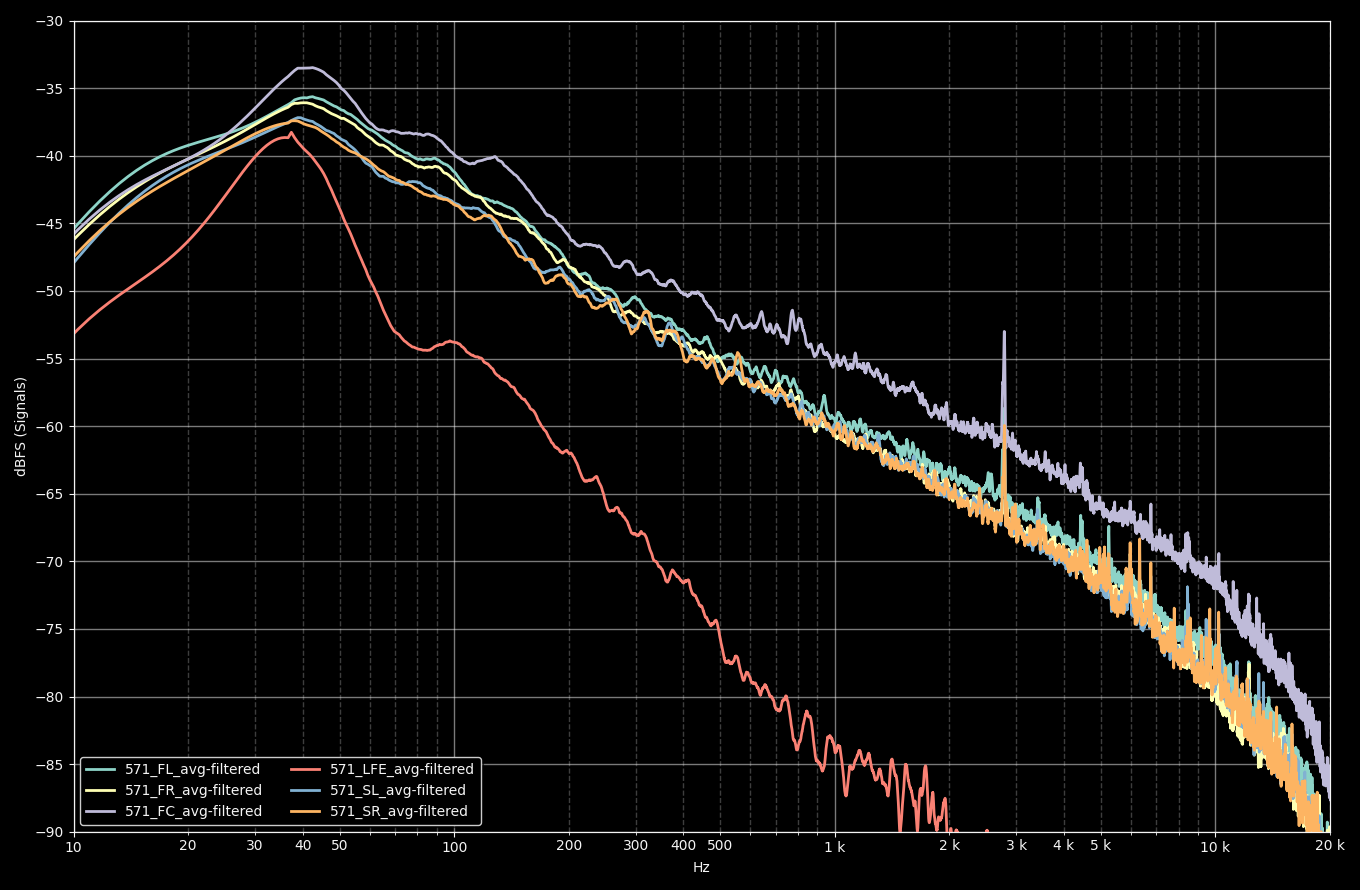 looking at the waveform, there's still visually less going on in the surrounds

then zoom in even more

Ultimately, if designing/sizing a system, then IMV it's fair to assume the surrounds can be less capable than the mains in terms of raw output
C

3ll3d00d said:
the 1st depth charge scene in that film still has C louder than the others

looking at the waveform, there's still visually less going on in the surrounds

then zoom in even more

Ultimately, if designing/sizing a system, then IMV it's fair to assume the surrounds can be less capable than the mains in terms of raw output
Click to expand...

For HT systems probably, don't know if that's true for theatres with rows of surrounds. Thats what there mixed for and where there mixed. And some directors want it ass loud as possible and like your in the middle of it. All I can say is I saw the meters. ( https://www.dorrough.com/vision.html )

Cbdb2 said:
All I can say is I saw the meters
Click to expand...

The link is a load of marketing talk so it's hard to tell exactly what it is measuring or where in the signal chain it sits. The raw content on the disc is quite unambiguous though the marketing talk sounds like it is doing something with the same intent as my app does.

For reference, the previous graphs referring to peak or average levels are computed by https://github.com/3ll3d00d/beqdesigner/blob/master/src/main/python/model/signal.py#L930 so it's basically, for average, it uses https://docs.scipy.org/doc/scipy/reference/generated/scipy.signal.welch.html (hence is an estimate of power spectral density) and, for peak, it is essentially the max per bin of all the slices in a spectrogram.

In any case, that section of the track is an example of one where the surrounds are relatively loud. I am sure there are other such scenes out there so if sizing a system for the absolute worst case then having big/capable surrounds is the way to go if it's practical to do so (space/budget allows).
Last edited: Aug 31, 2022
K

Cbdb2 said:
All I can say is I saw the meters. ( https://www.dorrough.com/vision.html )
Click to expand...

But as I noted above, the scale for the meters in a cinema mix, which I think you were suggesting you were monitoring, is not equal. 0dBFS on a surround channel is 3dB SPL quieter than 0dBFS on the fronts.

When transferred to an equal-calibration-level home mix, which is what 3ll3d00d is dissecting, you would expect a reduced surround waveform amplitude on lots of things.

I can quite imagine quite often the original cinema mixer would just do "pop this in all channels, equal meter level" for a general quick and easy thing to do for an "all round" effect, and because of that calibration difference, it will be 3dB SPL quieter in surrounds, and that will actually be fine - the "equal meter level" is slightly front-focussed.

(Actually, I say "intent" - that 3dB difference may well not have been a conscious intent, but rather just something arising "automatically" from the calibration. But still, it's what the original mixer heard and was happy with, and what cinema audiences heard.)
Last edited: Aug 31, 2022
You must log in or register to reply here.