This is a review and detailed measurements of the 2021 Bluesound Node wired and wireless streamer and DAC. It is the next generation from Node 2i which I reviewed a while back. The Node costs US $549 and was kindly drop shipped to me by a member. In case you don't know, Bluesound is from the same parent company as NAD.

The Node looks as attractive as the last generation:

That said, I can't figure out anything on it. Hopefully the app helps.... Not!!! There is no remote so I downloaded the app to try to figure out how to change inputs. The app downloaded fine and prompted me to upgrade the unit. I let it and it spent some 10 minutes doing so! This is way too clunky. What on earth is it doing for 10 minutes? It rebooted but then nothing would work in the app. The gear icon would do nothing. And neither would the "VCR" (player controls). It thought it was all well but it clearly could not communicate with the unit. I restarted it and the unit and still nothing. I gave up.

The back panel shows rich set of connections:

Inclusion of eARC over HDMI is very nice as is triggers for integration into the rest of your system. I used Ethernet for testing but there is also Wifi and Bluetooth.

Bluesound Node Meaurements
Roon nicely recognized the unit as an approved endpoint so I used it to stream by 24-bit, 1 kHz tone to get our familiar dashboard view: 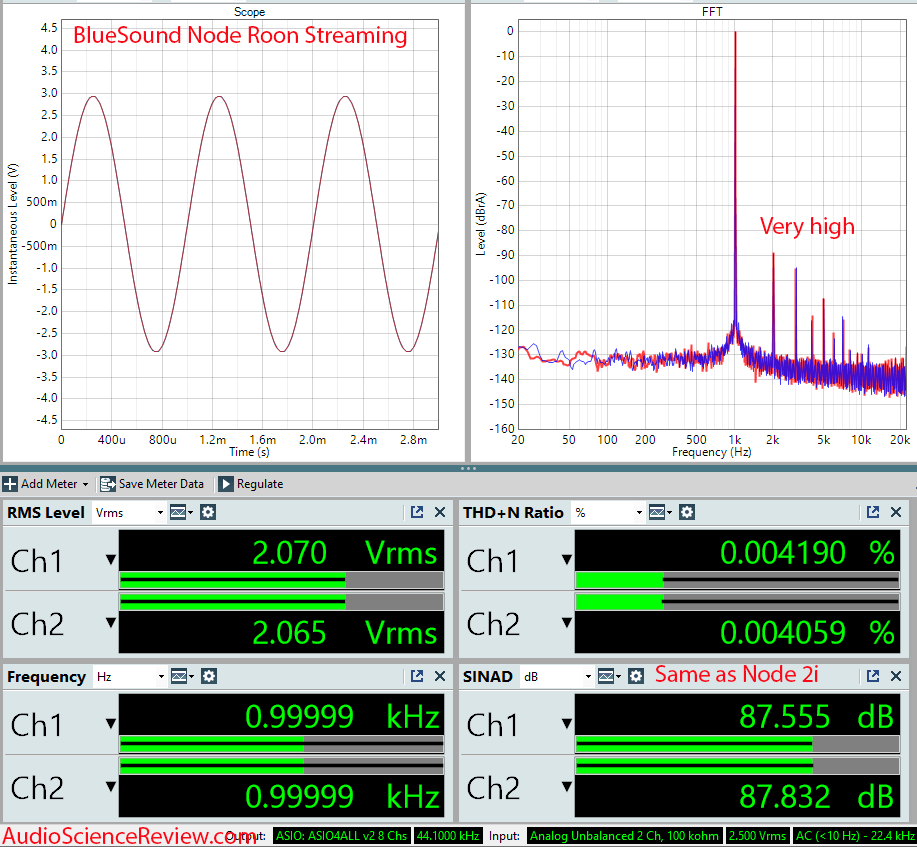 This is sad. There is a lot of distortion which in this day and age is just not acceptable. I looked up the DAC chip and it is the TI PCM5242. Sadly it is specified at 94 dB SINAD at -1 dBFS. So it is bad to start with but the Node knocks a few more dBs from that, landing it straight in our "poor" bucket of DACs in red:

For good or bad, this is almost identical to what Node 2i performance.

Wanting to make sure it was not a pipeline shrink to 16 bits or something, I hooked up the Topping D30Pro to its Coax output. Performance shot way up to what the D3Pro produces on its own: 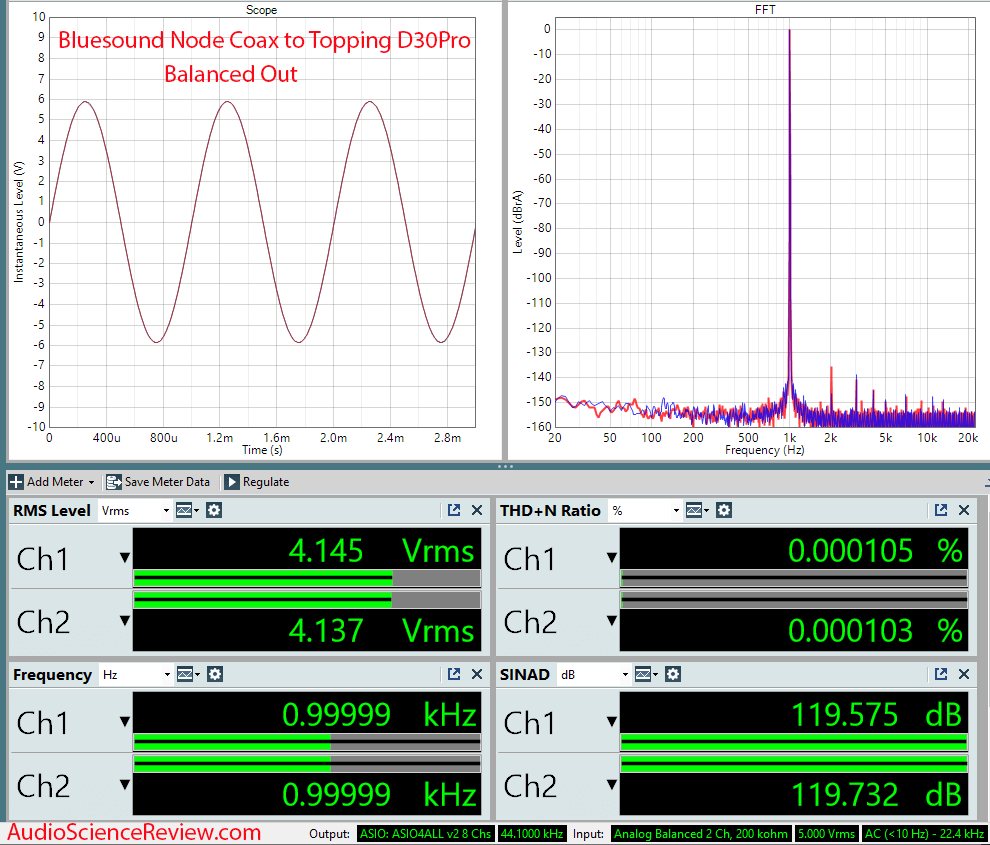 So you do have the option of adding a much higher performance DAC to it.

Surprisingly, the dynamic range is not too bad on the internal DAC: 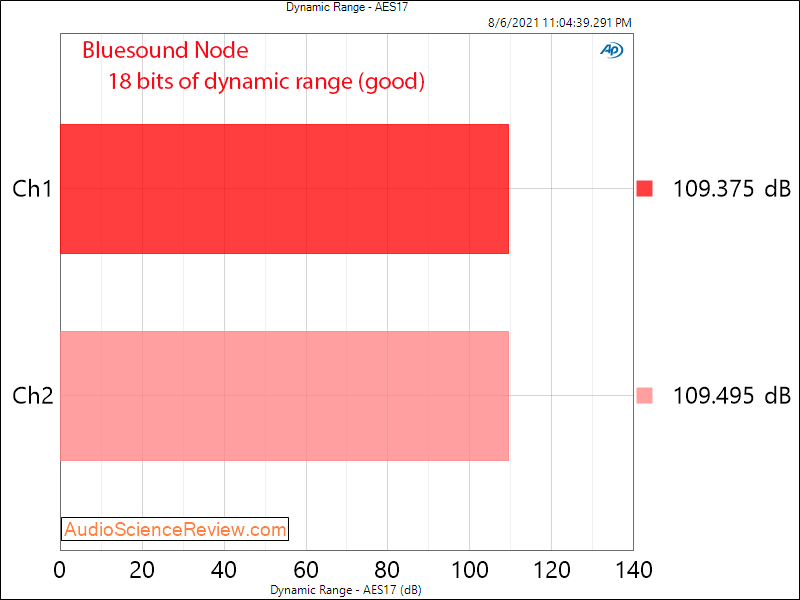 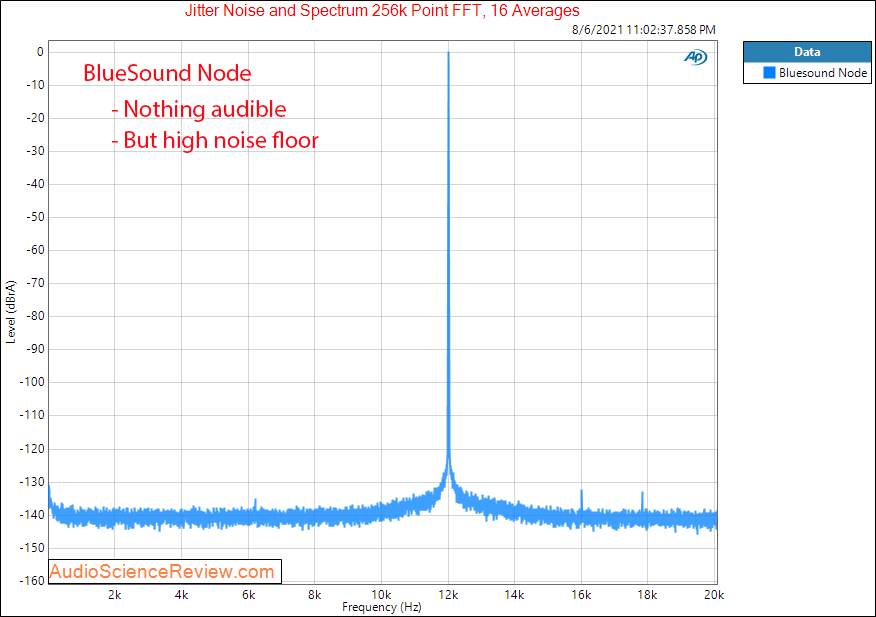 Since my Audio Precision analyzer can't control the device directly, I don't have much else I can measure. But I think we know how the internal DAC performs anyway.

Since the app did not work, I had no way of characterizing the input performance even though I was all cabled up and ready to measure!

Conclusions
From pure performance point of view, the Node 2 is a disappointment. OK, I cut it fair bit of slack but come on folks, it needs to at least clear the CD hurdle of 96 dB. Adding fair bit of aggravation was the non functional BlueOS control application. The fact that it didn't work was one thing. But not saying anything when it could not control the unit is something else.

Anyway, I can't recommend the Bluesound Node from performance point of view or reliability of its App. If you use an external DAC, then it works well assuming you can get the app working.

What a killer feature set! When was the last time we saw a DAC with both a subwoofer out and trigger in and out? Yet along a fully rounded streamer.

i wish the S/N was a bit better, can the speaker outputs get high passed within the unit?
R

For years, I use Bluesound Node, Powernodes (both first generation) and NAD M50 at home, with Qobuz.
I purchased all devices second hand, so price was much lower.

The app works fine for me, as works the multiroom.
If you don't use Roon, that's a good way to do multiroom.
Actually, when I purchased those, I didn't know about Roon, and that was the best (/only) multi room option.
(And Roon has some serious drawbacks as well)
Sure, it requires upgrades every now and then, and they take what seems like forever (when you switch your sound system on, that's because you want to start listening music at that very moment, not x minutes later).

For main system, I attach a real DAC, after miniDSP Dirac processor, and a very serious amp.
For the kitchen, the Powernode is good enough.

So, in short, it's unforgivable they don't provide the right technical quality, because, in practice, the Blueos ecosystem is pretty pleasant to use.
But, as you say, if you plug a real DAC and a good amp, the problem is solved.

Thanks to Armir for the review and also to the member who dropshipped it!

Looking at the specs and the raving reviews all over the internet you got to think this is an amazing streamer/DAC solution. But as already discussed in other threads and now also proven by the measurements from Armir this is a flawed (or even broken) product.
Pioneer BDP180 blueray player - Denon AVC-X3700h AVR - LG OLED55E6V - JMLab DB24
Lenovo laptop - SMSL SU-9 - SMSL SH-9 - Philips Fidelio X2 - Sennheiser HD600 - Hifiman HE-400i - Truthhear x Crinacle Zero

Location
In a jar, by the door

Crikey, glad I saved my money, shame as it seemed like a good out of the box solution

I mean. If you just use it as an interface and use another quality D/A I've heard a lot of good things about the Node.
Internal conversion seems to be subpar indeed.

Amirm - did you sheck the toslink input on the bluesound ?
Have they corrected the issue that was in node 2i ?
https://www.audiosciencereview.com/...surements-of-bluesound-node-2i-streamer.6631/
Musician and DIY builder

Amir reviewed another Node 2 February 2019. Since then I have just used my Node 2 as transport to Topping D70 and D90. And I have never had problems with the app.

Disappointing results. I am a happy owner of the Node 2i and the app is great in my opinion. I use this with two Bluesound Flex speakers in other rooms and they are also nice. DAC performance doesn't matter in my case, since I am using the coax output to feed a pair of Genelec 8340 digitally.
Last edited: Aug 7, 2021

Thank you for the review.

I bought it because I wanted a nice and easy streamer solution (not to expensive) with the possibility to add an external DAC (in my case the RME ADI).
Never intended to use the internal DAC anyway.

If I understand the review correctly, it should then work fine and measure as well as the external DAC attached?
Or are there other technical flaws that affect the digital signal?

In practice (without using the internal DAC) :
I am more than happy about it for my daily use.
Set up was bit like a walk in the dark.

I particular like the ability to stream from external attached HD, Tidal, Radio stations/RP, to set 5 presets (touchscreen) and to be able to control it from phone, iPad and mostly from the Macbook on my knees. In my case, such an improvement in convenience from iMac/Audirvana.

I dislike that the app does not load certain Artwork.

@amirm what’s up with you and “modern” technology

. You seem to have a nag of having problems with what is supposed to be the most simple things in various reviews

Could it be you?

… don’t worry, just kidding here. I’d me more inclined to think that these parts of the products very often are badly made, and worse: badly tested. It’s almost as if it’s an afterthought, while in reality it’s the primary user interaction. These things should be flawless, and in case of problems actually help the user resolve them.
Do diamonds shine on the dark side of the moon?
M

abdo123 said:
can the speaker outputs get high passed within the unit?
Click to expand...

I own a "black box" myself (Volumio Primo) but in my case the setup worked flawless. Kind of OT but is anyone able to send such a unit to Amir? I am not since I am located in Europe and it is my main source but I am curious about how it measures in comparison.

Anyway: thank you for testing the Node!

Have to mention that the USB file management is horrendous. Probabily one of the worse ever made on such device. Definetly not the tool to play your music from your USB library. I suspect Bluesound to push owners to stream via internet rather than play their saved music files (or simply save money not develloping this USB file management) .

Of course you can stream from another device via a third party software and use Bluetooth. But putting such a big effort to make a nice streaming Device/software and totally wasting the USB file management is a total shame and/or a customer rip off.
S

The update proces of the BlueOs, especially voor the Bluesound Flex, is nog flexibel at all indeed. Checking the release notes, many times the updates are related to other devices i do not own. For sure i like problem solving at work but for stuff at home I hate it. Still the Bluesound node with an external dac is still the best affordable solution IMHO.
Wat zeg je ?
B

voodooless said:
@amirm what’s up with you and “modern” technology

. You seem to have a nag of having problems with what is supposed to be the most simple things in various reviews

Given how often (almost always) these apps seem to completely fail for you I often wonder that as well.

Is it possible yiu have some crazy router, security
or phone settings that prevents most of these apps from working properly? Also would it make sense to get an iPhone to test these apps, iOS has less flexibility making it more predictable, and apps are often better tested on the iphone

Bachemar said:
Also would it make sense to get an iPhone to test these apps, iOS has less flexibility making it more predictable, and apps are often better tested on the iphone
Click to expand...

That would be valuable if the apps were actually part of the review. That is however not the focus here, and the fact that we read about it just anecdotal in case of issues.
Do diamonds shine on the dark side of the moon?

I understand that the performance compared to other DACs was subpar but I don’t understand why this is marked as broken. To me broken implies an audible problem. In this case the performance is still .004% distortion which, of course, is two orders of magnitude below human audibility. So in this case you could put a very sad panther but in fact the device is not broken.
You must log in or register to reply here.

A
Lumin D2 vs. BlueSound Node

T
Lossless streaming to a Bluesound Node–what are my options?