This is a review and detailed measurements of the 600 ohm version of the Beyerdynamic DT 880 "semi-open" headphone. It was kindly sent to me by a member and costs US $198 on Amazon including Prime shipping.

I am not a fan of the silver color on the pads but otherwise, this is a good looking headphone: 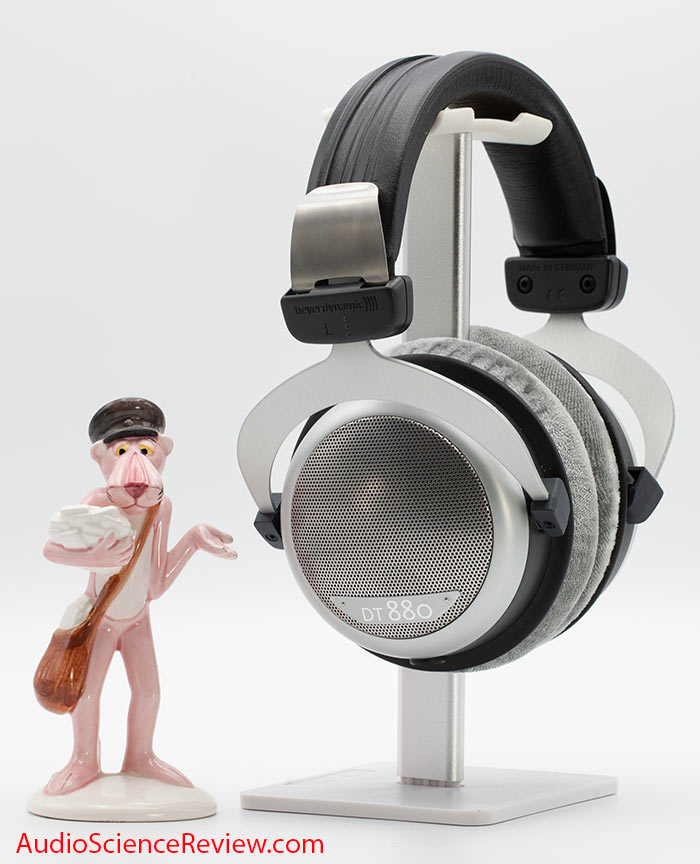 The sample I have has been modified to have independent 3.5mm mono jacks and was supplied with a balanced XLR cord. The original has non-removable cord.

The cups are round and have inside diameter of 65mm and rather shallow 15 mm depth.

These are light headphones considering their size: 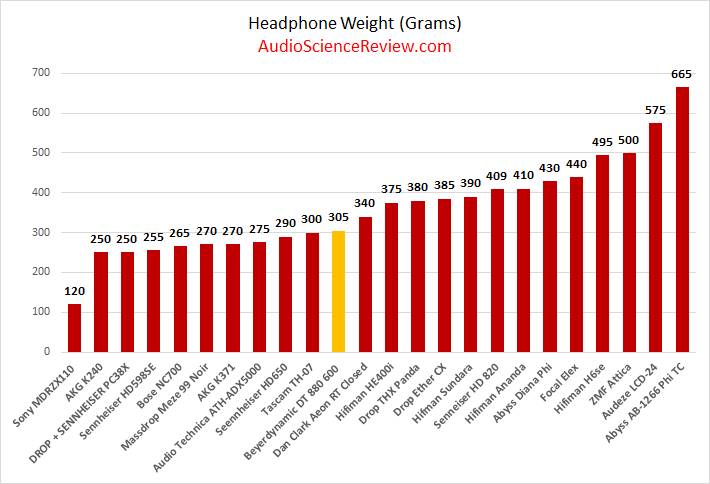 So overall comfort is very good although I found the fabric a bit scratchy.

Note: The measurements you are about to see are made using a standardized Gras 45C. Headphone measurements by definition are approximate and variable so don't be surprised if other measurements even if performed with the same fixtures as mine, differ in end results. Protocols vary such as headband pressure and averaging (which I don't do). As you will see, I confirm the approximate accuracy of the measurements using Equalization and listening tests. Ultimately headphone measurements are less exact than speakers mostly in bass and above a few kilohertz so keep that in mind as you read these tests. If you think you have an exact idea of a headphone performance, you are likely wrong!

The large cups made an easy job of mounting them on my fixture and getting good measurements. 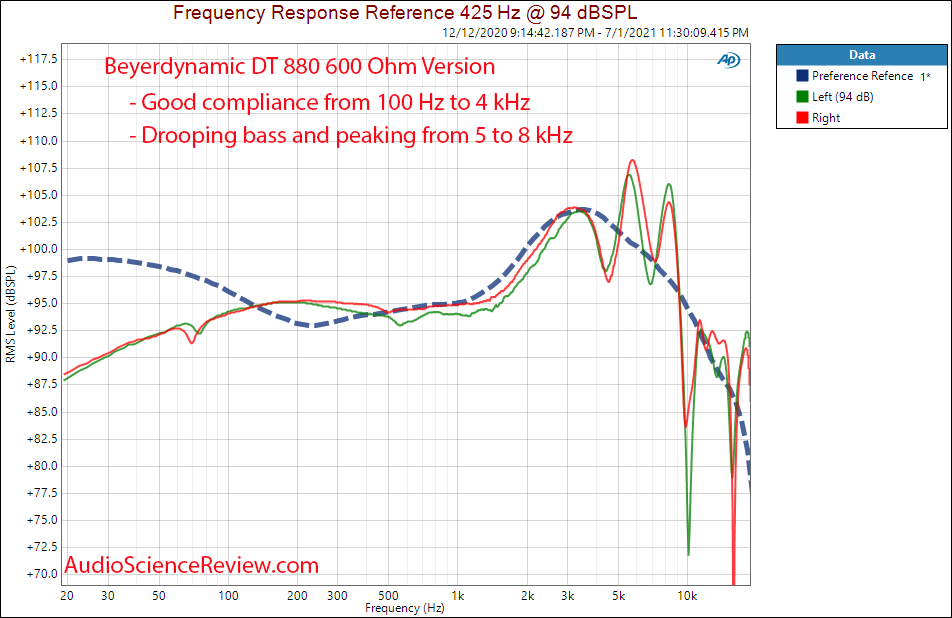 I was impressed by how closely the response hugs the preference curve from 500 Hz to 3 kHz. You can even extend that to 100 Hz as deviation is not large there. In my opinion, this is a very important region to get right as so much of music spectrum is concentrated there. Levels in music drop off rapidly outside of this region. Here is our relative measurements of the same: 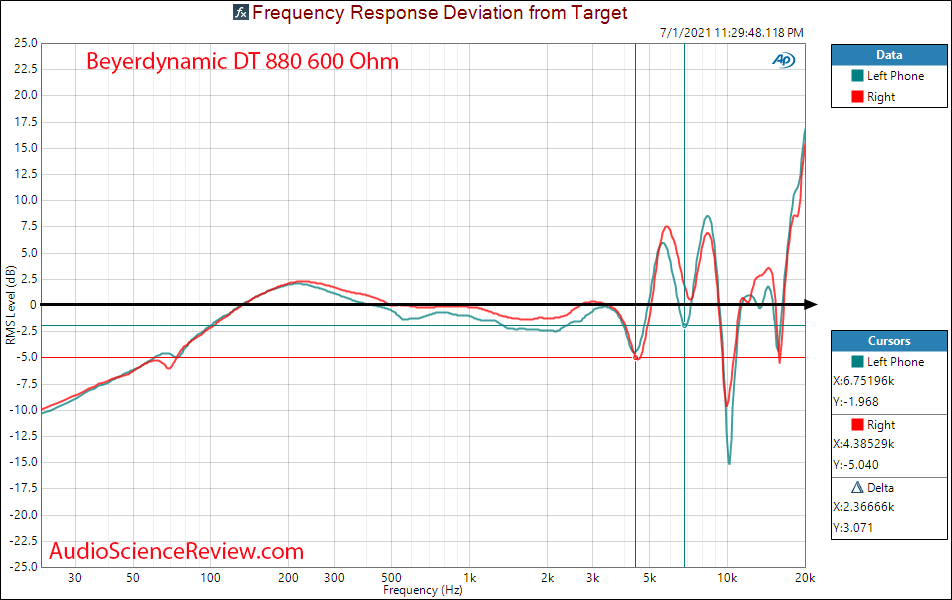 These headphones definitely need bass boost but unfortunately we have a brick wall in front of us in fixing that: 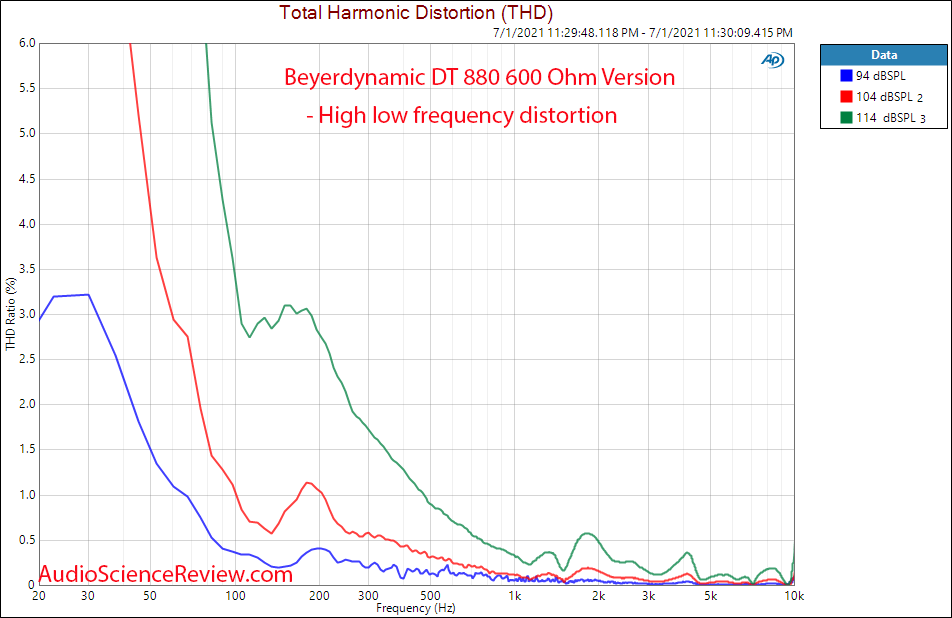 We can see how the distortion is off the charts by 104 dBSPL. In absolute levels, we reach nearly 60 dBSPL at 20 Hz which is speaker level distortion, not headphone: 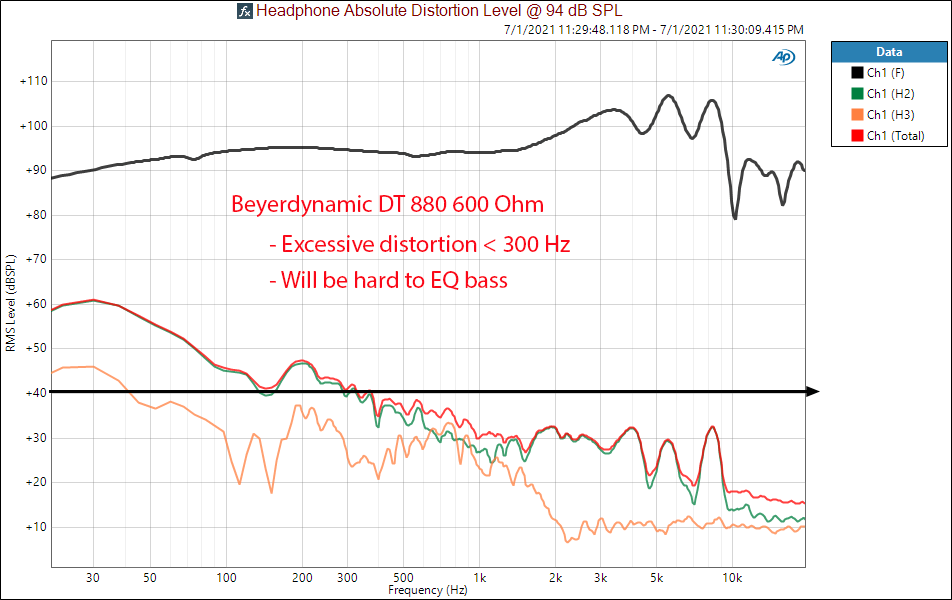 Group delay is not revealing of any problems: 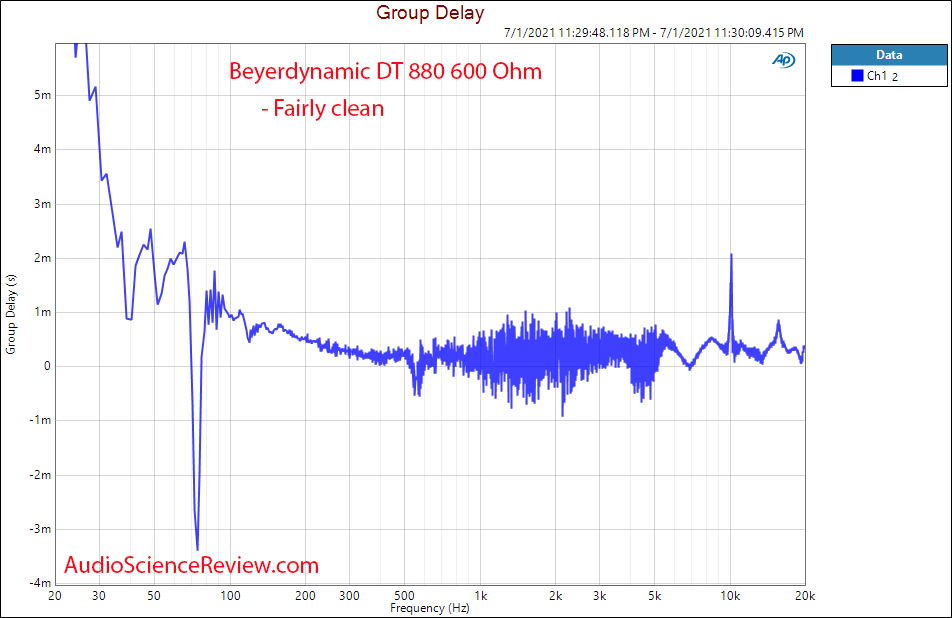 Stated impedance is 600 ohm but in reality, response is even higher than that: 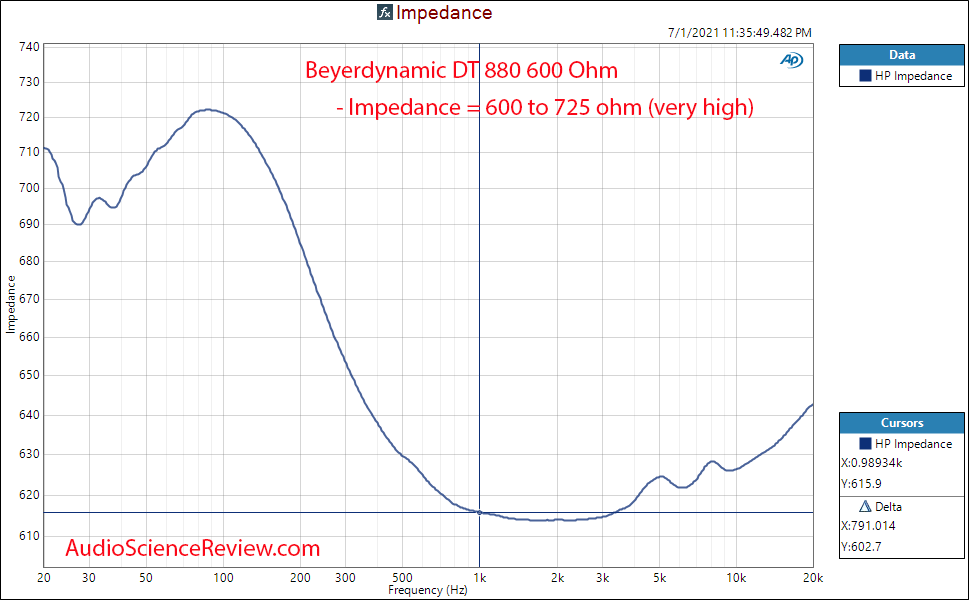 Bass is where we need power and here, we are above 720 ohm so you best have a headphone amplifier with very high output voltage. Forget about any portable device driving them especially when you include its low sensitivity: 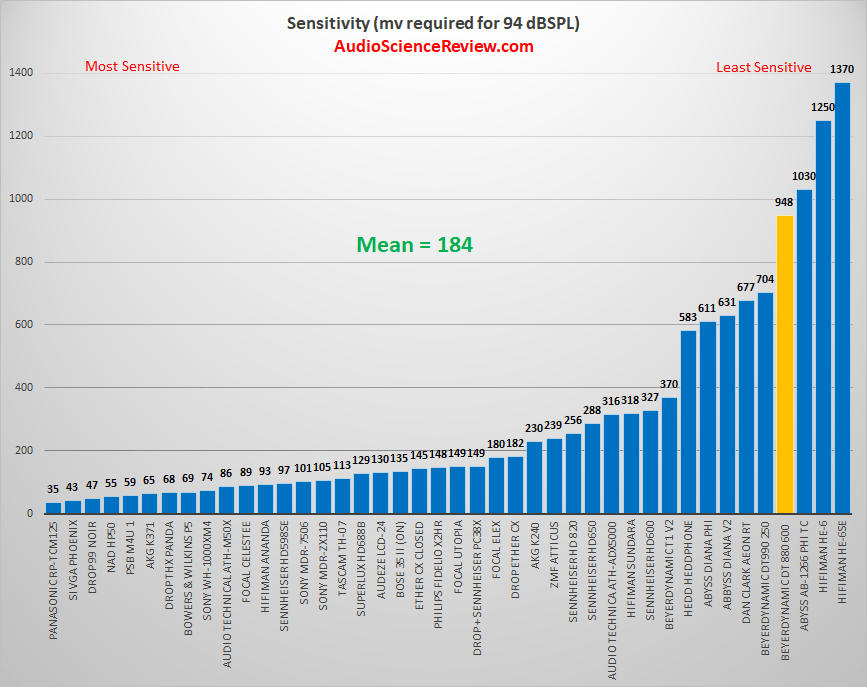 Beyerdynamic DT 880 600 Ohm Listening Tests and Equalization
A casual look at the frequency response would say these are going to be "bright" but they don't come across too much in that regard. The reason is that we only have a couple of peaks in treble region before the response settles back down. The extra energy there accentuates spatial qualities which is very good out of the box. I would give it B+/A- in that regard. Bass response is poor as expected so I tried to fix that with EQ. While on bass light tracks I could get away with right amount of boost per frequency response measurements, with anything that had deep bass I was greeted with static in one or both cups.

Not only was distortion a problem, so was low sensitivity and high impedance. To avoid digital clipping, I had to pull levels down. This in turn put my RME ADI-2 DAC out of business as far as achieving proper loudness. I switched to Topping A9 and even there, I was almost at max volume in high gain. I reduced headroom but then that caused severe distortion. At the end, I had to pull out much of the bass EQ and wind up with this: 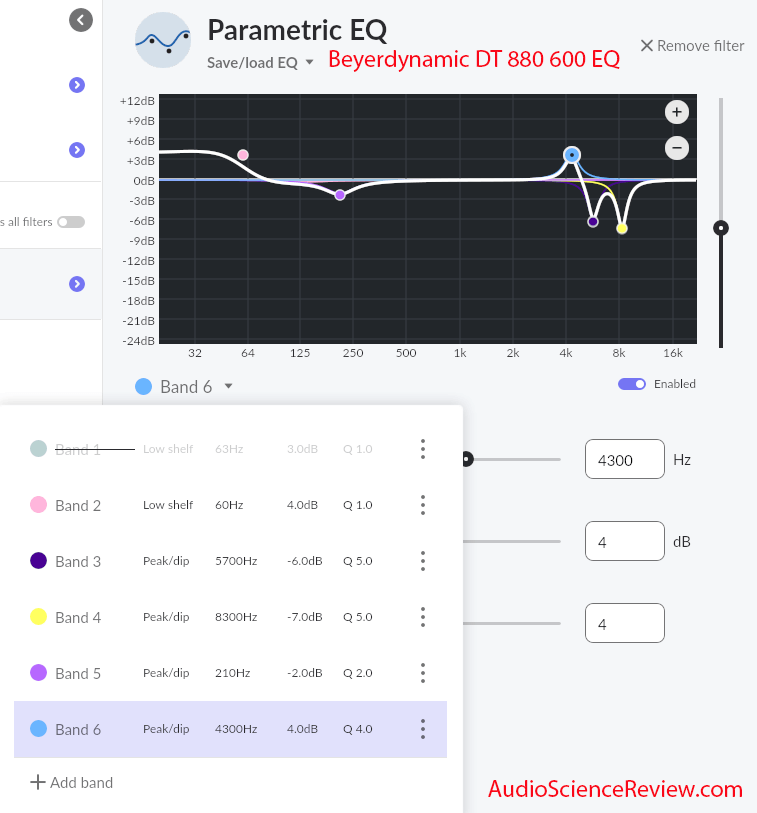 As you see I had to shut off Band 1. I also dropped Band 2 and still I could hear distortion at elevated levels with anything bass heavy.

Pulling down the upper bass/mid-range has a good but small effect in making the headphone "lighter on its feet" (less boomy) and the couple of high frequency fixes brought down the sharpness that was highlighting background hiss in the track. To give back some spatial qualities, I boosted the one dip.

Once there, with lighter music such as classical, orchestral, jazz and vocals, this was one good sounding headphone., The spatial qualities continued to jump out at me in a good way putting a smile on my face when they did.

Conclusions
I didn't think I would ever see a genre specific headphone or speaker but here we are. Due to low efficiency, high distortion and lack of bass, you need to limit your listening enjoyment to music that doesn't have much low frequency demands. Shame that we have to change our music listening to adapt to limitations of a design. But such is the story of this headphone. Feed it what it likes and with a bit of EQ and you have a very enjoyable headphone. Do otherwise and it produces garbage. And oh, you best have a super high output headphone amplifier. And drive it differentially as I did with this modded version.

Overall, I can't recommend the Beyerdynamic DT 880 600 ohm but if you choose to like it with the right music consumption, I won't be there to hound you.

So the EQ'd Sony MDR-ZX110 remain at No.1
Especially in pink @€7.
Thxs Amir. They were/are the bargain of the year.
The soul chooses the lessons, & the ego complains about them.

Makes me think of a Grado high end headphone from the same era. Treble torture devices. Glad these peaks aren't as noticeable in listening a the seem like they would be.

Probably the most asked about headphone on the internet. Thanks for the review Amir. I've nearly pulled the trigger on these a few times due to the hype train.

Thanks. Wondering if having such high impedance really brings anything to the table...
T

stevenswall said:
Makes me think of a Grado high end headphone from the same era. Treble torture devices. Glad these peaks aren't as noticeable in listening a the seem like they would be.
Click to expand...

They were pretty noticeable when I tried to use them 10 years ago.

The family resemblance with the DT990 is clear.

I liked the DT880-600 (with treble peak removed).
The 95dB/V efficiency is indeed an issue for most amps.
People have a tendency to overestimate their hearing capabilities.
Use your ears to listen to music not as an analyzer.
M

Too bad about the bass distortion. I don't know about the 600Ohm version but the 250Ohm version I've heard has smooth mids and light and airy highs. I wonder if it's possible to address the bass issues in a revamped DT880 without messing up the desirable aspects of the mids and treble.

solderdude said:
The family resemblance with the DT990 is clear.
Click to expand...

Deisgn wise for sure. The sound signature is pretty far apart though. I compared a brand new DT990 pro and DT880 pro.

The DT880BSE has more lows but sounds too muddy for me.
BSE comes close to the DT990 in sound signature.

That one improves by using the grey pads.
People have a tendency to overestimate their hearing capabilities.
Use your ears to listen to music not as an analyzer.

It seems the last hope for Beyerdynamic in terms of measurements is the DT1990. As far as I can tell, Amir hasn't reviewed the 1990's yet, am I right?

Eq and listen them at low levels and dt880s are perfect all day headphones. I Use them for general porpouse and gaming ( very good for gaming). When i want to listen music at proper level i grab my sundara ! They have super deep bass at low output but they like to distort very very easly when you crank em up. Pretty good detail retrival in my opinion tho.
D

You've got a high output of reviews the last days Amir! much appreciated and respect.

Thanks Amir. This headphone is more demanding yet better than I had expected.
M

solderdude said:
The DT880BSE has more lows but sounds too muddy for me.
BSE comes close to the DT990 in sound signature.

That one improves by using the grey pads.
Click to expand... 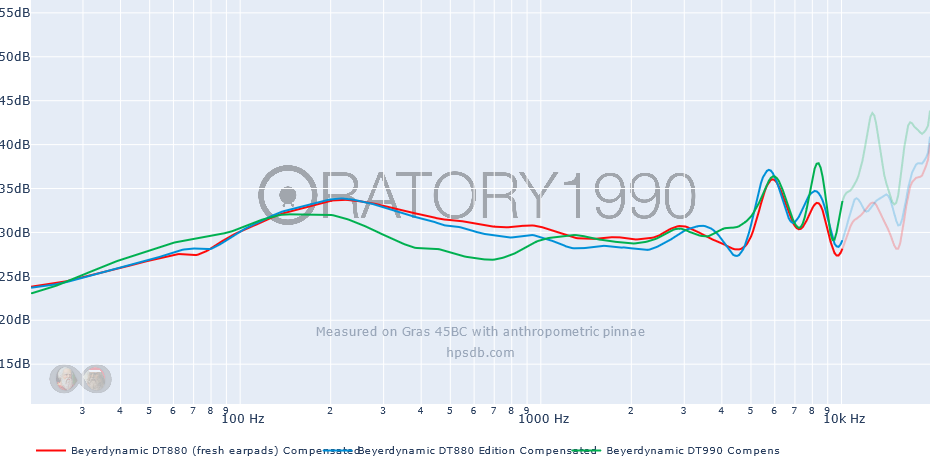 Luke Lemke said:
It seems the last hope for Beyerdynamic in terms of measurements is the DT1990. As far as I can tell, Amir hasn't reviewed the 1990's yet, am I right?
Click to expand...

No, I reviewed it and it became one of the most controversial reviews ever: https://www.audiosciencereview.com/...eyerdynamic-dt990-pro-review-headphone.19975/
Amir
Founder, Audio Science Review
Founder, Madrona Digital
Contributing Editor, Widescreen Review Magazine
Click for My Technical Background
My YouTube Channel

amirm said:
No, I reviewed it and it became one of the most controversial reviews ever: https://www.audiosciencereview.com/...eyerdynamic-dt990-pro-review-headphone.19975/
Click to expand...

Sorry Amir, but I mean DT 1990 PRO, Not the DT 990 PRO. They are highly recommended by some "youtube subjectivist audiophiles" as one of the best headphones in the $500,00 range. It would be awesome if you could review them! Thanks!
Last edited: Jul 3, 2021
S

I own and regularly use Beyerdynamic TYGR 300 R which is very much a re-tuned 32 ohm DT990 (less treble?).
Tygr300R is so much nicer looking than DT-something and supposedly better tuned as well. I assume that Tygr is about as bad or worse in terms of bass distortion as DT990, but in practice I am happy with it without EQ, despite lack of the very lowest bass

Luke Lemke said:
Sorry Amir, but I mean DT 1990 PRO, Not the DT 990 PRO. They are highly recommended by some "youtube subjectivist audiophiles" as one of the best headphones in the $500,00 range. It would be awesome if you could review them! Thanks!
Click to expand... 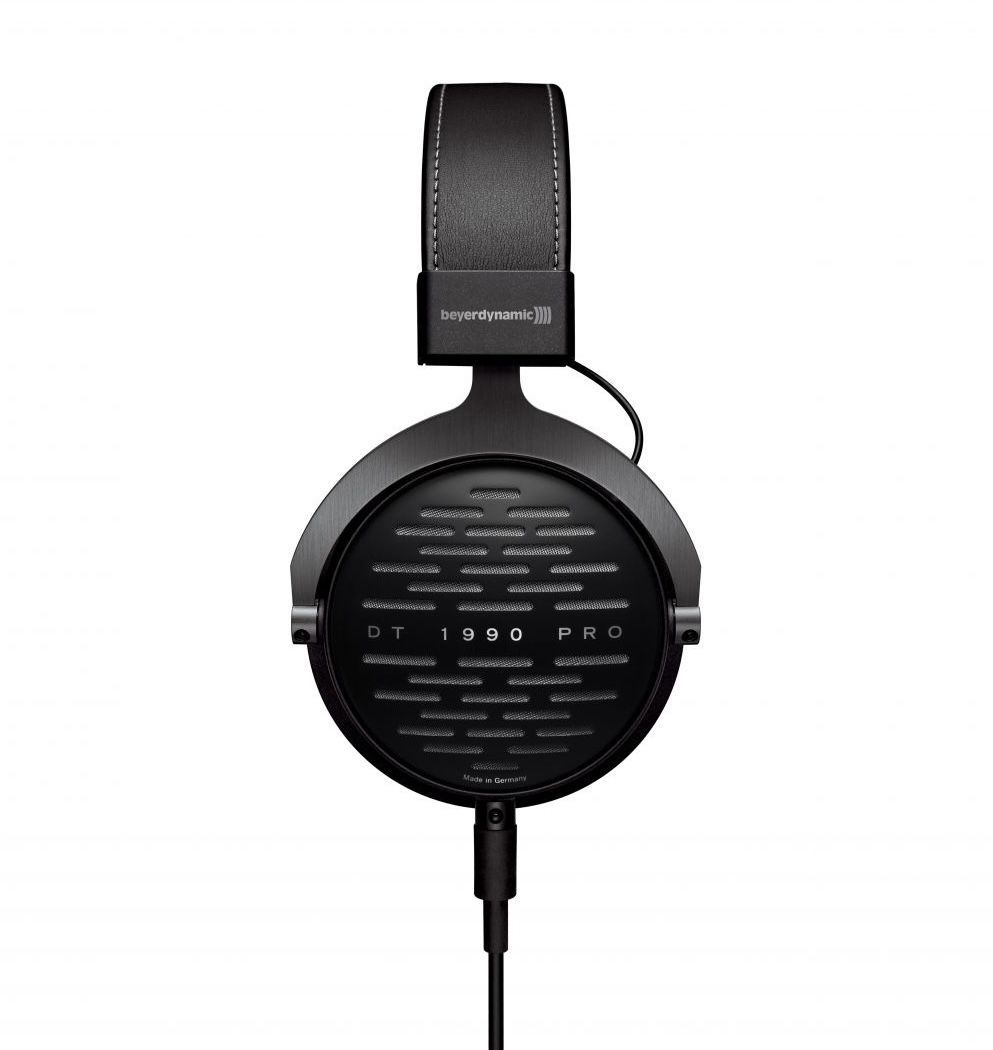 I had these for a while and enjoyed them. Treble peaks will usually bother me yet not so with the Beyers (yes they are brightish).The bass really is not bad with them, for me anyway; most people seem to like jacked lows to my ears.
You must log in or register to reply here.

Any love for the Beyerdynamic 990 Edition 600 Ohm Headphones ?