laudio said:
Now you are getting it. "If the dac itself was damaged then ok". Which is a distinct possibility, due to undervoltage. Would be best to stop the review there IMO. Looks are purely subjective.
Click to expand...

Alas you are not getting it. And you are just speculating in any case about hypotheticals.

And don’t seem to have a sense of humor either. As in, this dac was junk, but if it was cool looking at least it would be that.this thing is neither beautiful nor funky, cool or ugly. It is meh in the most OEM generic way.

laudio said:
And if you are going to tell me you can't damage a MOSFET or discrete transistor in the amp section due to lower voltage (over time maybe not during power up), disagree. Depends on the internal design.
Click to expand...

amirm said:
Amp section? In a DAC? And what causes said damage from under voltage? You think a power supply goes from 0 volts to nominal in zero time?
Click to expand...

Why are you asking me questions if I have no knowledge in the field. Not sure I can explain more after that statement.
OP

laudio said:
Why are you asking me questions if I have no knowledge in the field. Not sure I can explain more after that statement.
Click to expand...

You can't differentiate between a rhetorical question and a real one? Good grief. Reply ban issued.

Review threads are not for constant complaining. Say it once if you have to, and then move on. Repeatedly posting nonsense defending a product and complaining about this and that is not welcome in review threads or even in the forum as whole. Find some other place if these things are so bothersome to you.
Amir
Founder, Audio Science Review
Founder, Madrona Digital
Contributing Editor, Widescreen Review Magazine
Click for My Technical Background
My YouTube Channel

Found a few pictures from the inside. PSU section looks very simple, with at least two low voltage, low dropout low voltage regulators, and probably a higher voltage (and current) one as well). The last will probably power the headphone amp, the other two are most likely for the DAC section. Could very well be that the USB chip is powered by the USB cable itself, but that's just more guessing. Also, these images were from around 2016, so this device might have a different internal layout and components, but somehow I doubt it will be much different. From all this, I fail to see how 12V vs 15V would have made any difference, nor how a 5V supply would damage the thing (even without additional protections in place).

Also found that there seems to be a modding community around this device, exchanging various capacitors for "better" ones, or even replacing them with supercaps and other wierd voodoo . Strange people these audiophiles
Do diamonds shine on the dark side of the moon?
M

voodooless said:
various capacitors for "better" ones, or even replacing them with supercaps
Click to expand...

voodooless said:
Also found that there seems to be a modding community around this device, exchanging various capacitors for "better" ones, or even replacing them with supercaps and other wierd voodoo
Click to expand...

I saw peeps changing out the crystals for much larger crystal packages. The crystal oscillators where so big they could not fit on the PCB
M

Doodski said:
The crystal oscillators where so big they could not fit on the PCB
Click to expand...

They are having crystal oscillator size contests .. lol.

Everyone knows it’s not the size of your oscillator that matters but what you do with your jitter reclocking algorithms.
Last edited: Oct 7, 2021

musicforcities said:
Everyone knows it’s not the size of your oscillator that matters but what you do with your jitter reclocking algorithms.
Click to expand...

Apparently not everyone knows...
Do diamonds shine on the dark side of the moon?
M

voodooless said:
Apparently not everyone knows...
Click to expand...

Yeah they are sooo totally multibit. What is it like 2017?

What is sad is that that money and energy could go into, for example, restoring “classic” 1970s Sansui/luxman/etc amplifiers that actually are nicely engineered and interesting in some way (and likely still pretty good measuring with TLC). heck, even old Naim/quad/meridian/Lynn stuff if you want to keep it British. or refurbing stuff like old kef reference speakers. The ones with real wood veneers but rotten foam surrounds. Or making new speakers for that matter. Lol.
Last edited: Oct 7, 2021
J

I have this DAC (but don't use it in critical listening) and it seems to work fine with USB. I haven't done any measurements though. Only issue is distortion while using volume knob in pre-amp mode. In DAC mode everything works fine. I will try to do some measurements of the output through the ADI-2 Pro FS R ;-)
M

JeyElDee said:
I have this DAC (but don't use it in critical listening)
Click to expand...

I recognize that proviso all to well cause I have said it many times myself. As in: I have a vacuum tube preamp (which I love but not for serious listening).

I call it: Dissassociative Device Displacement. Or DDD. It’s the ASR guilty pleasure alibi version of admitting one subscribes to playboy (but only to read the articles).

Its right up there with Speculative Measurement Anxiety Disorder (SMAD) when one begins to suspect that all the audio gear that you own and love but that Amir has never tested would test terribly.

I suffer from both.
What cool about ASR is that people won’t laugh when you say you use a $150 DAC for the critical stuff. Though using it balanced gets you props.
Last edited: Oct 7, 2021
J

musicforcities said:
i
I recognize that proviso all to well cause I have said it many times myself. As in: I have a vacuum tube preamp (which I love but not for serious listening)
Click to expand...

Actually, I use it often, in the garden shed. Connected to a portable computer full of FLAC's and then to a Yamaha A-500 amp and to a pair of JBL Control 25 and a Canton sub. Outdoor listening. Great sound. It is not critical listening but good sound is important. I would not use it if it was bad.
My guilty pleasure is that it is way too good for outside occasional listening/party.
Even when I would swap it with my Topping D70s for the same purpose - or swap the Yamaha with a McIntosh - it would be an overkill and would be even more guilty pleasure, still not critical listening.
Last edited: Oct 7, 2021

Looked into the PS:

found this: When using the Dorado from new, or when it has not been used for several days, it can take anything up to 10 minutes before the blue LED comes ON.

It seems to charge super capacitors (probably several Farads). Most likely a few of them in series with normal caps in parallel.
Charging current should be slow otherwise the supercaps will go defective.
These are closer to batteries than capacitors.

I assume @amirm doesn't have it anymore.

It won't affect the DAC measurements one bit even if the supercaps were charged. Reason... the DAC itself has internal buffer caps and regulators. 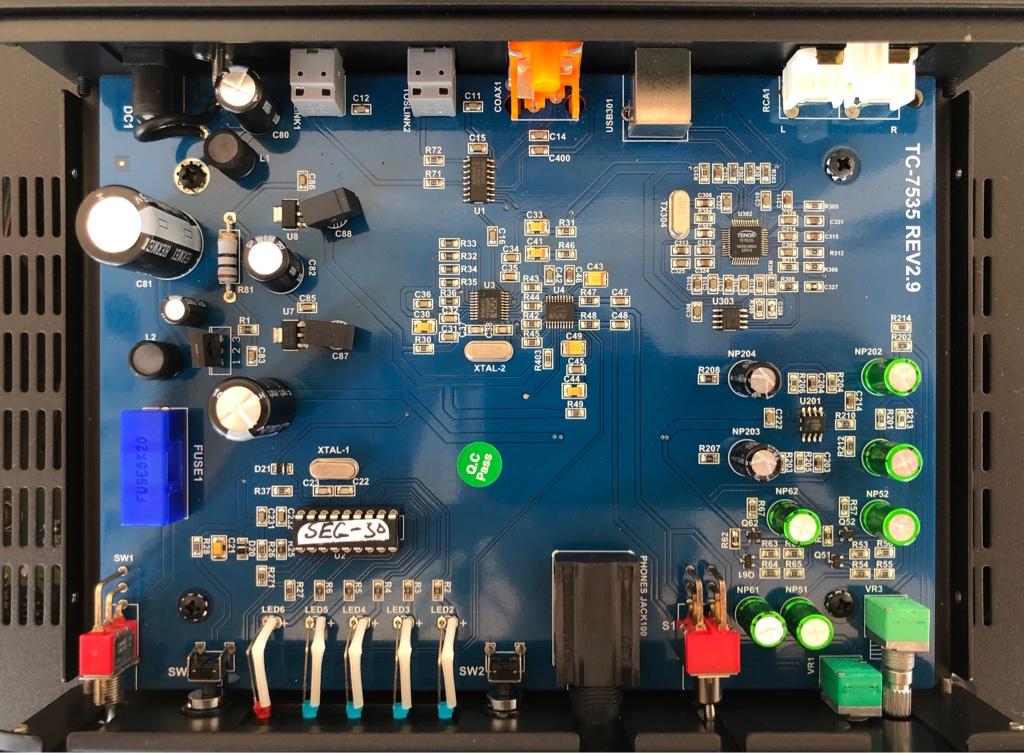 The DAC is designed to operate with voltages between 12V and 13V (what the battery device should deliver when fully charged)
probably it has something like THIS in it.
The power thingy internally boosts the incoming voltage (which may be between 12V and 15V) to 15V internally so it can charge the 13V 'supercap/battery'.

So feeding it with 12V as Amir did is fine.
The 12V is lowered by internal regulators anyway.
Last edited: Oct 7, 2021
People have a tendency to overestimate their hearing capabilities.
Use your ears to listen to music not as an analyzer.

@solderdude, that picture is from an already modified version, C87 and C88 have clearly been replaced.
Do diamonds shine on the dark side of the moon?

here you are a stock version... the circuit is the same though. 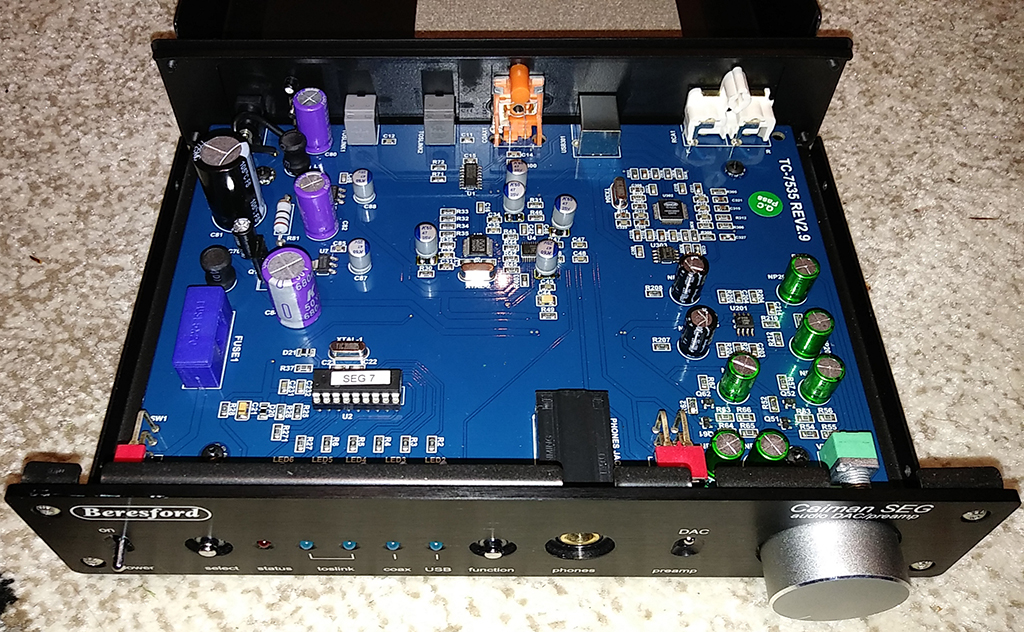 Can't find picca's of the rechargeable supercaps box.
Will probably be just the supercaps + a bunch of other caps and a charging circuit.
Last edited: Oct 7, 2021
People have a tendency to overestimate their hearing capabilities.
Use your ears to listen to music not as an analyzer.
P

voodooless said:
Fun fact: LED's are sometimes used in current sources exactly because they are so low noise. Some colours seem to be better than others though.
Click to expand...

LEDs can be used to elevate voltage regulator's output voltage by the forward voltage of the LED making the circuit quieter. White and blue LEDs shouldn't be used on such application as they are noisy.

Maybe other forum veterans can conform this please. The UK forums seem well into 'used' gear generally and if new, niche makers such as this. The ones I've posted on in the past only nod to bench tests, the thinking seemingly being that the designers use test gear when developing the gear and all the end user should need to do is plug and play. As said above, loads of mods and tweaking for this and older versions (7520 was the start, the original 7510 left alone I believe) as well as various firmware changes. It was actually this or an earlier version that began the realisation that current dacs aren't so dependent on external power supplies (this was shortly before the whole 'Supercap' trend and I'd all but moved on by the time this trend kicked off.
Tear down these walls, Cut the ties that hold me, Crying out at the top of my voice, Tell me now if you can hear me...............
S

Lots of excuses for a crap dac, all the apologists are out hand wringing. 12,-15v won't make a damn bit of difference, the critical circuits are all under 12v. The upper limit will be the voltage rating of the caps or the first regulator. The lower voltage limit is when it switches itself off and no longer works. Between these two points the performance increment will be miniscule.

It's just crap, an old oem design modded through various iterations to keep the marketing copy fresher than the ancient tech.
You must log in or register to reply here.