This is my 'review' of the Behringer X32 (Compact), one of the most popular Pro Mixing Consoles in the live sound business.
It's a 32 channel desk (hence the name) with 23 local (analog) inputs and 16 outputs. It comes with a USB expansion card, which made it possible to test its ADC and DAC sections separately.
The console was released in 2012 (almost 10 years ago!) and I bought this unit in 2018. It can be had for ~1500€/1900USD now.
My tests were performed with the desk running at 48khz. 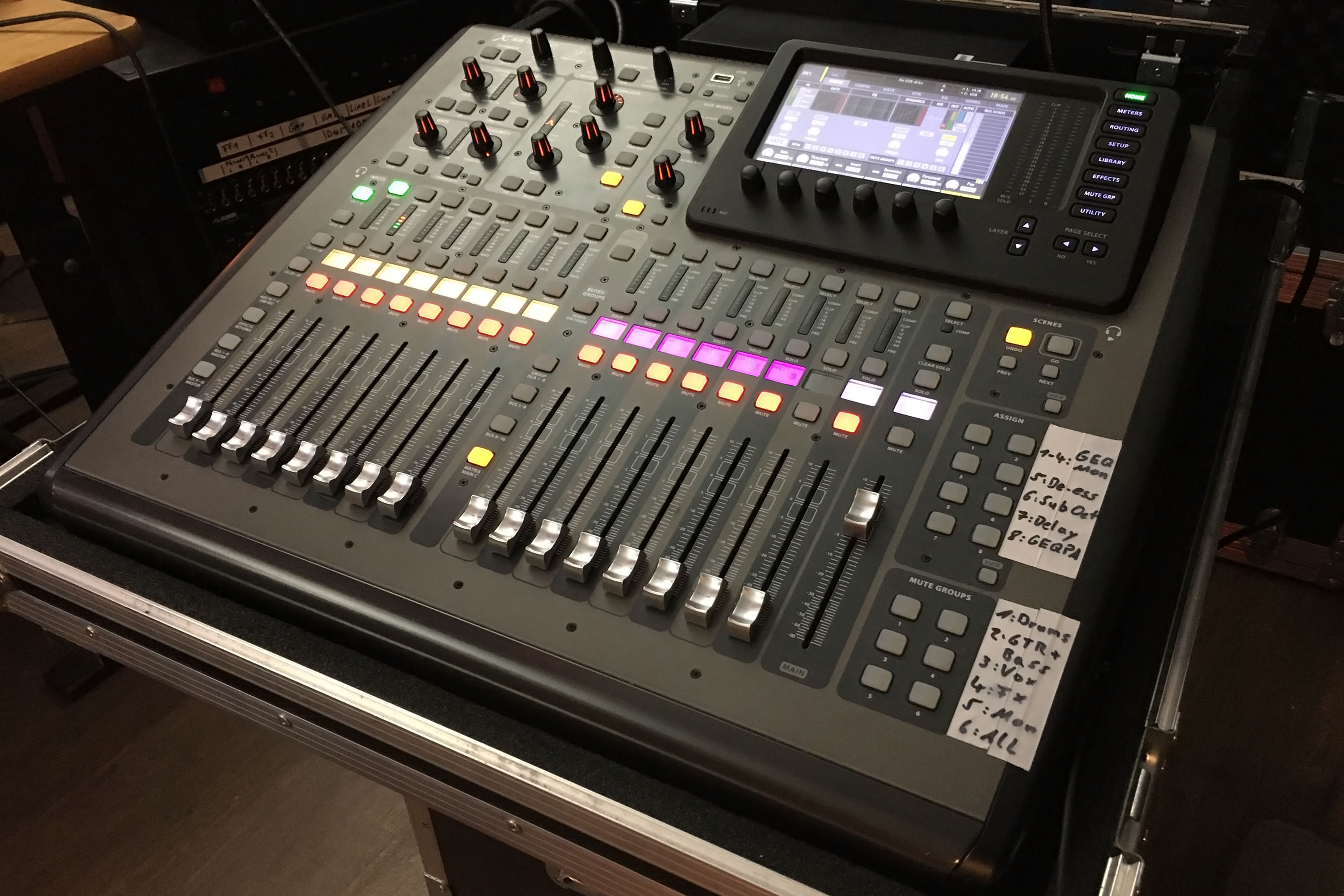 Let's start with the DAC section. This means I'm sending a signal from the PC to the X-USB interface (the digital expansion card inside the console), routing that straight out of the XLR port in the back. 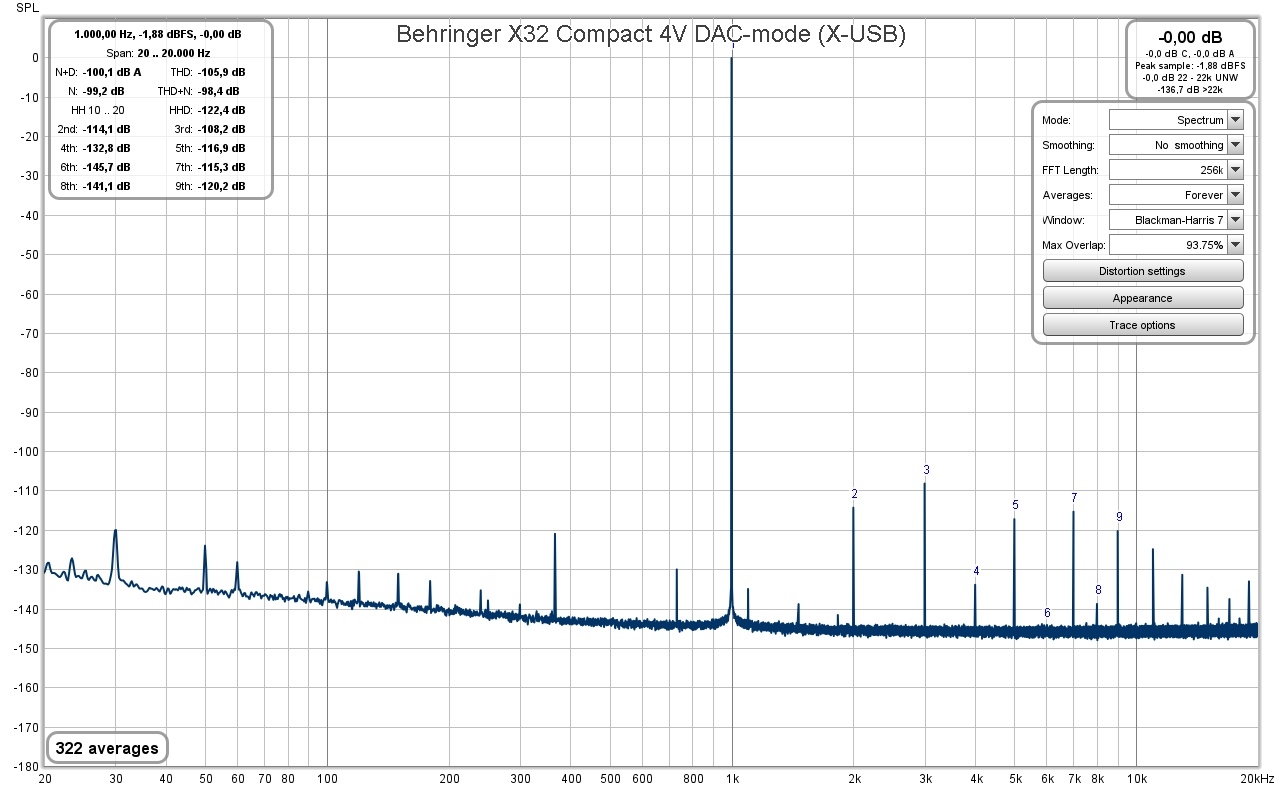 Just shy of 100dB THD+N. That's a long shot compared to modern state of the art DACs, but it isn't bad and close to the performance of the Focusrite Scarlett 2i2.
I don't know if the desk has seen hardware improvements over the years, but if a new console measured like this in 2012, it would've been a pretty nice result. 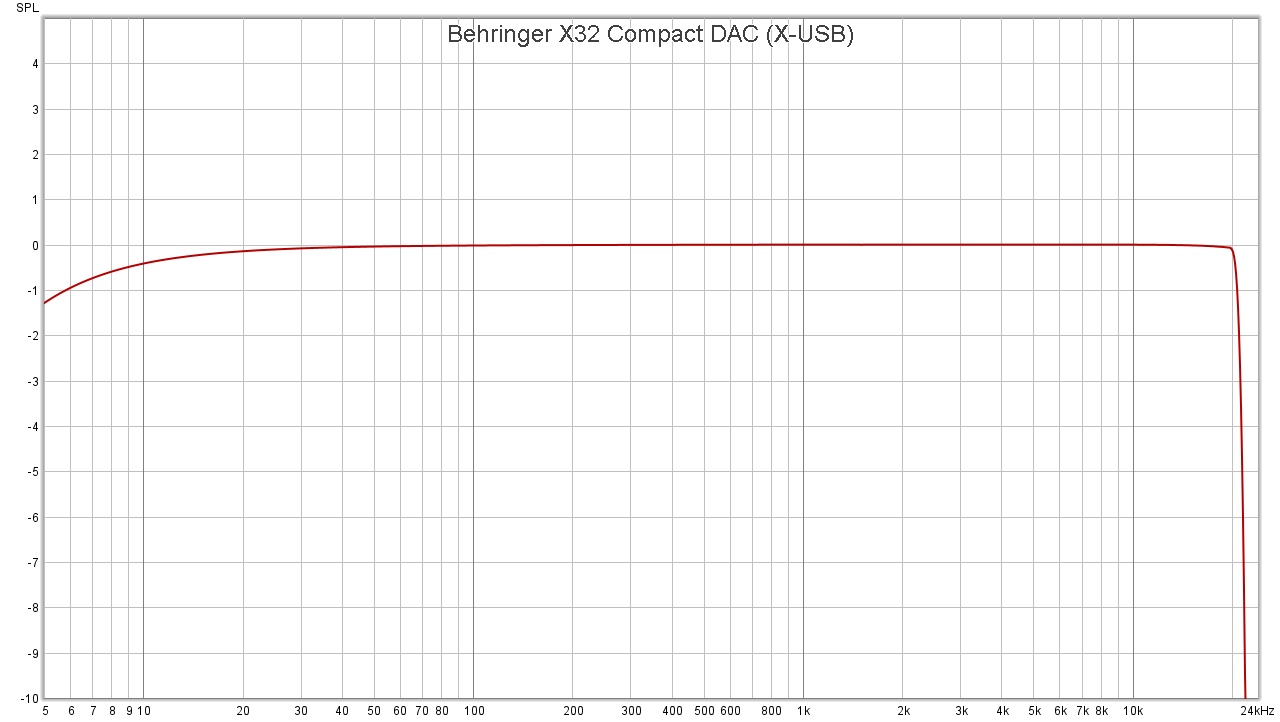 Dead flat in the audible band, that's how it's supposed to be. 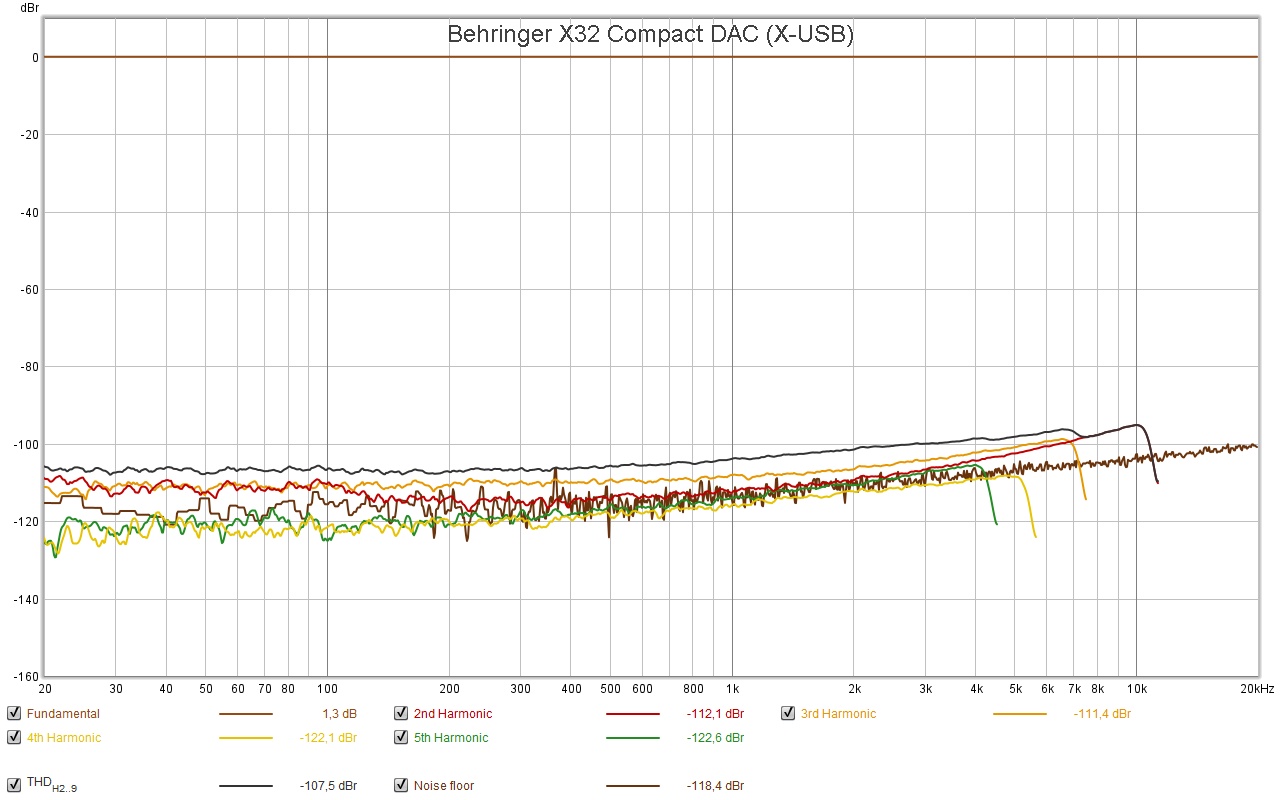 THD rises with frequency, but I've seen worse. It's worst at 10k (and then drops to nothing, since HD above 10k is inaudible and filtered out), but even there it's ~95dB quieter than our signal. 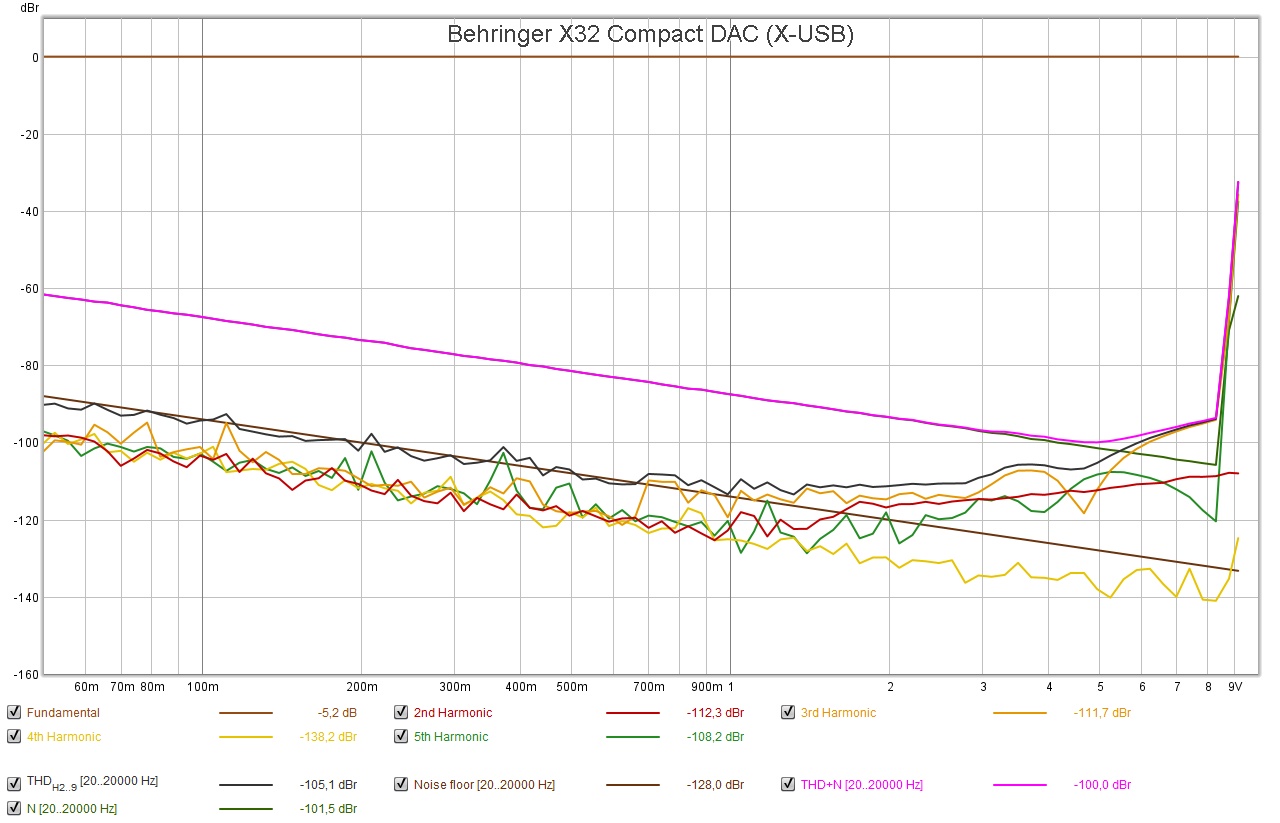 Nothing unexpected here. THD+N is noise dominated until ~5V output, when the 2nd harmonic starts coming out.


That's it for the DAC, let's have a look at the ADC section now: 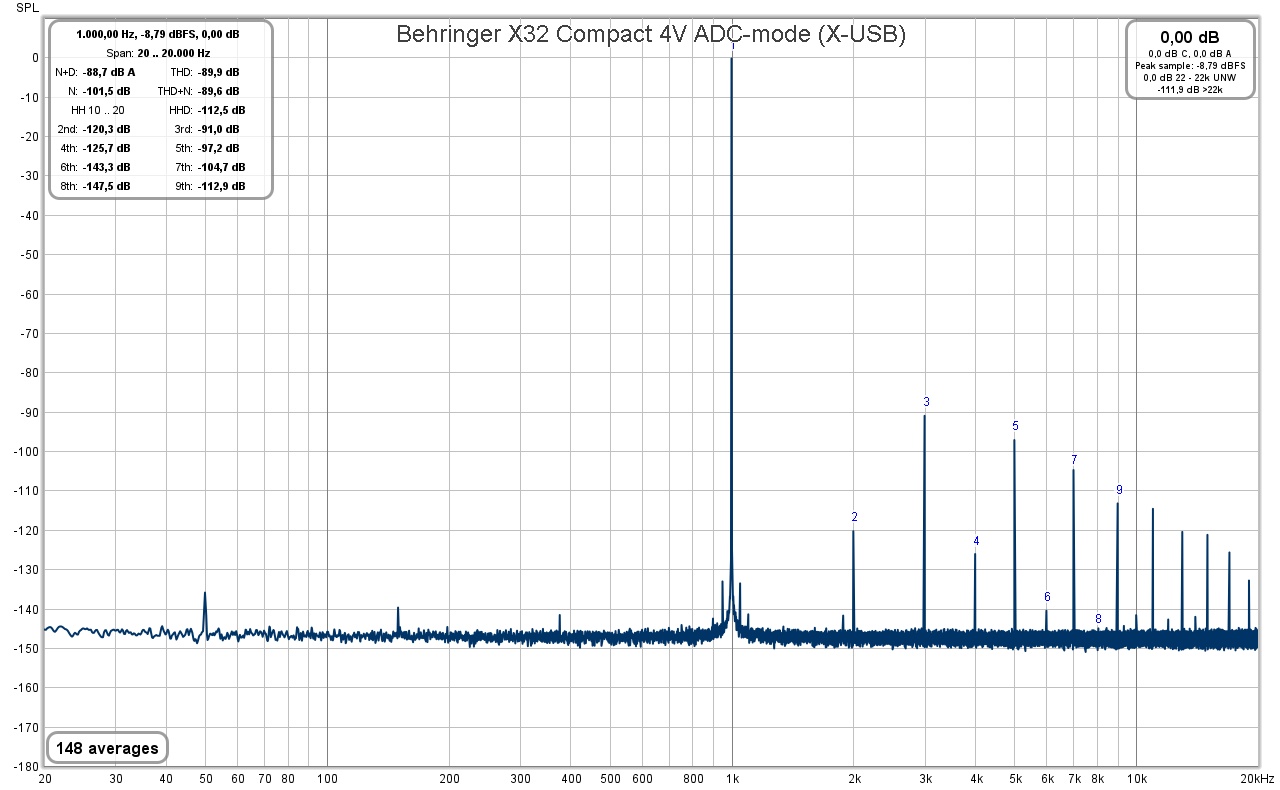 Noise is a bit lower compared to the DAC side, but we're fighting against odd order harmonics here. THD+N is dominated by distortion, which we will later see in the distortion vs output graph again. 90dB is nothing to write home about, but not a deal breaker. Hey, maybe the preamps were optimized for mic input levels, which are much lower? Let's see if that is the case, but first we'll have a look at the frequency response. 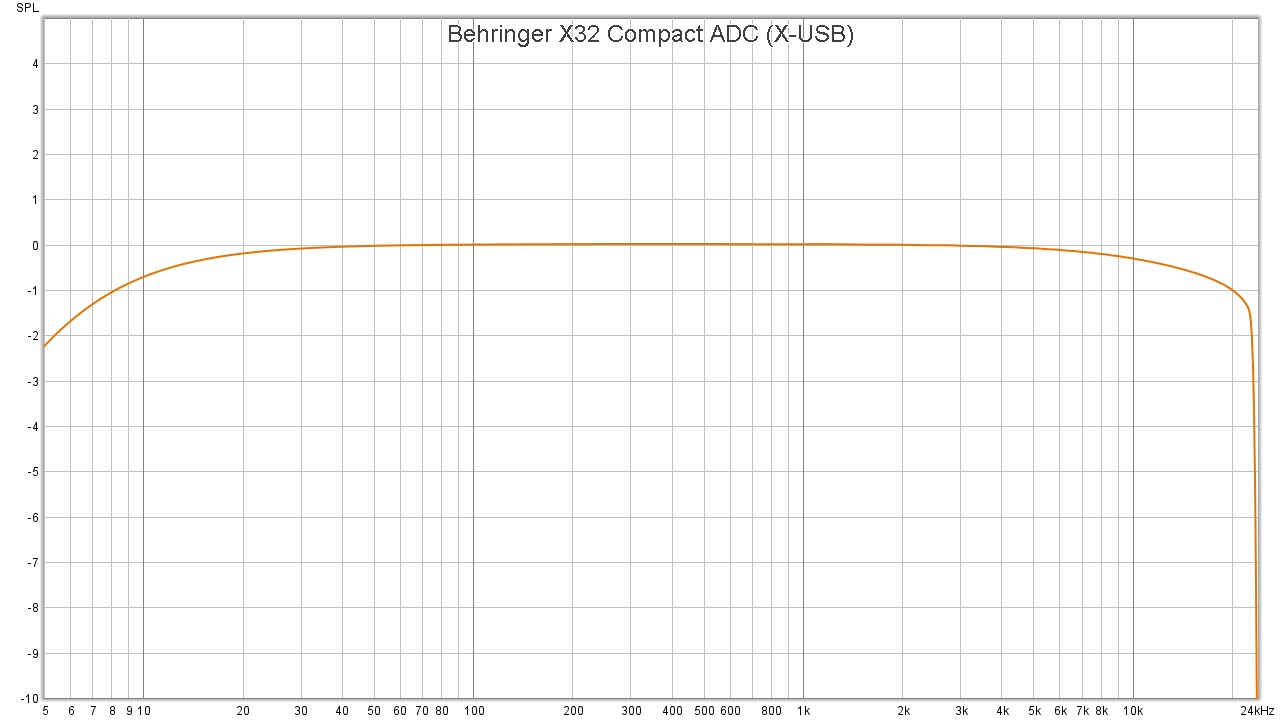 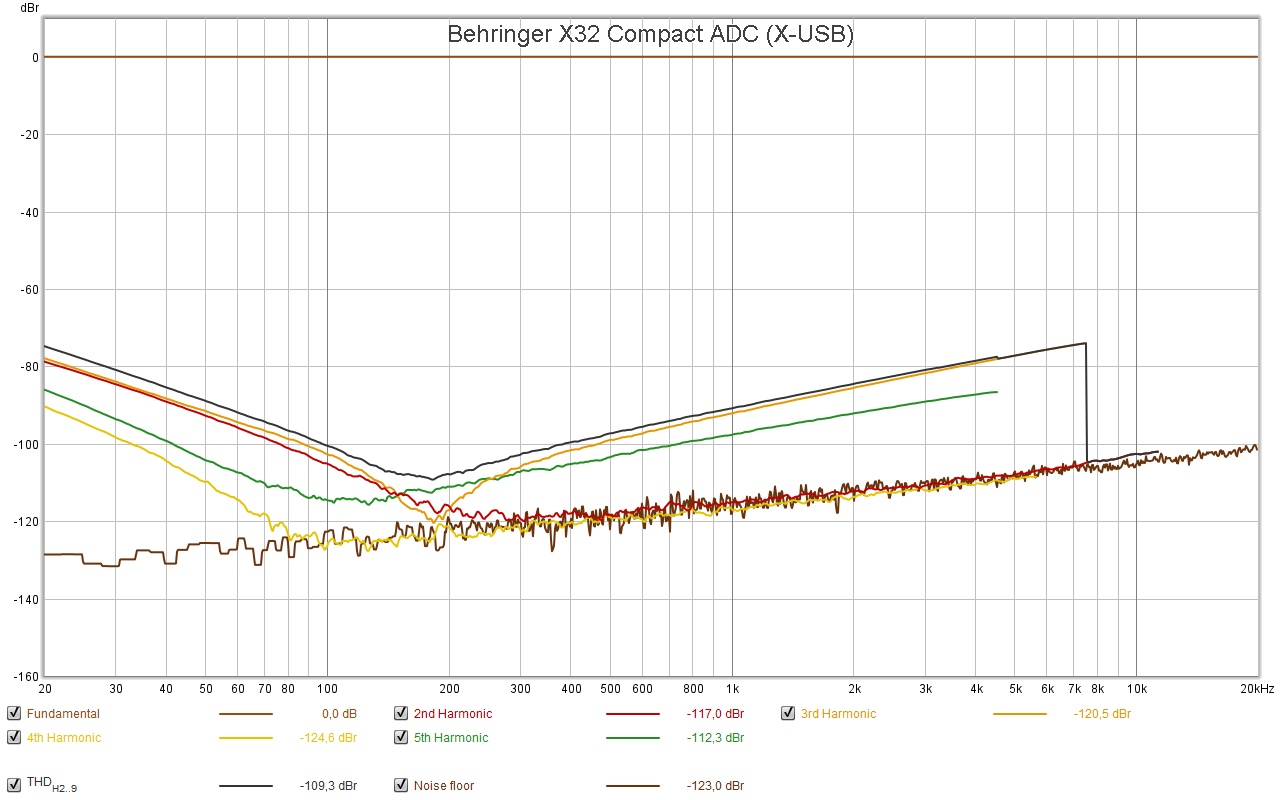 Well this is a puzzle... The cursor is at 170Hz, where THD is at -109dB. SINAD would be noise dominated in this case and around 100dB. This is 10dB better than at 1k and ~25db better than at 7k. What's going on here? The odd order harmonics are haunting us again. 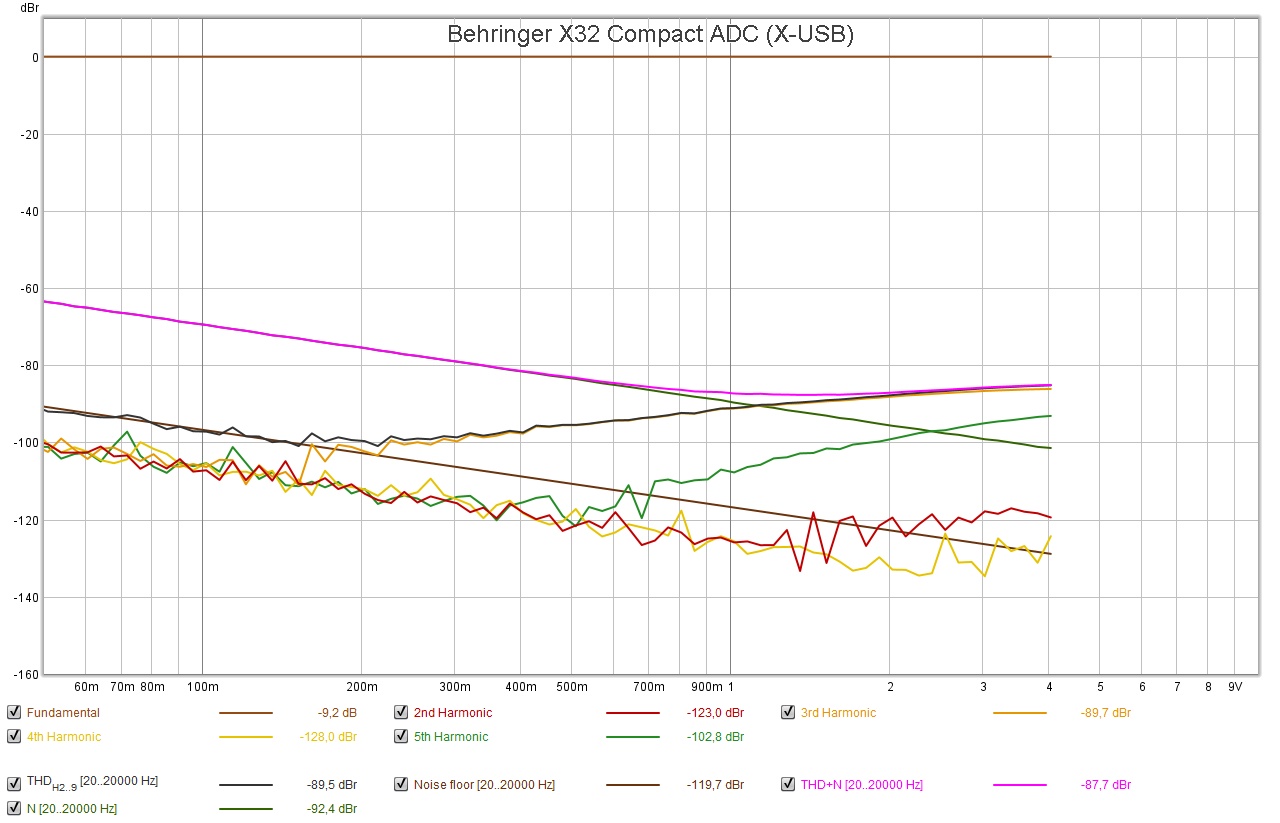 Sadly, this is not the case. Best case SINAD seems to be between 1 and 2V. Distortion sets in very early, but I have observed some odd behaviour on this during my testing, which I will report on later. I have a few more measurements I want to show first.
I also want to note that I could only measure to 4V input, since my DAC can't output more. Upgrades to 10V coming in the future 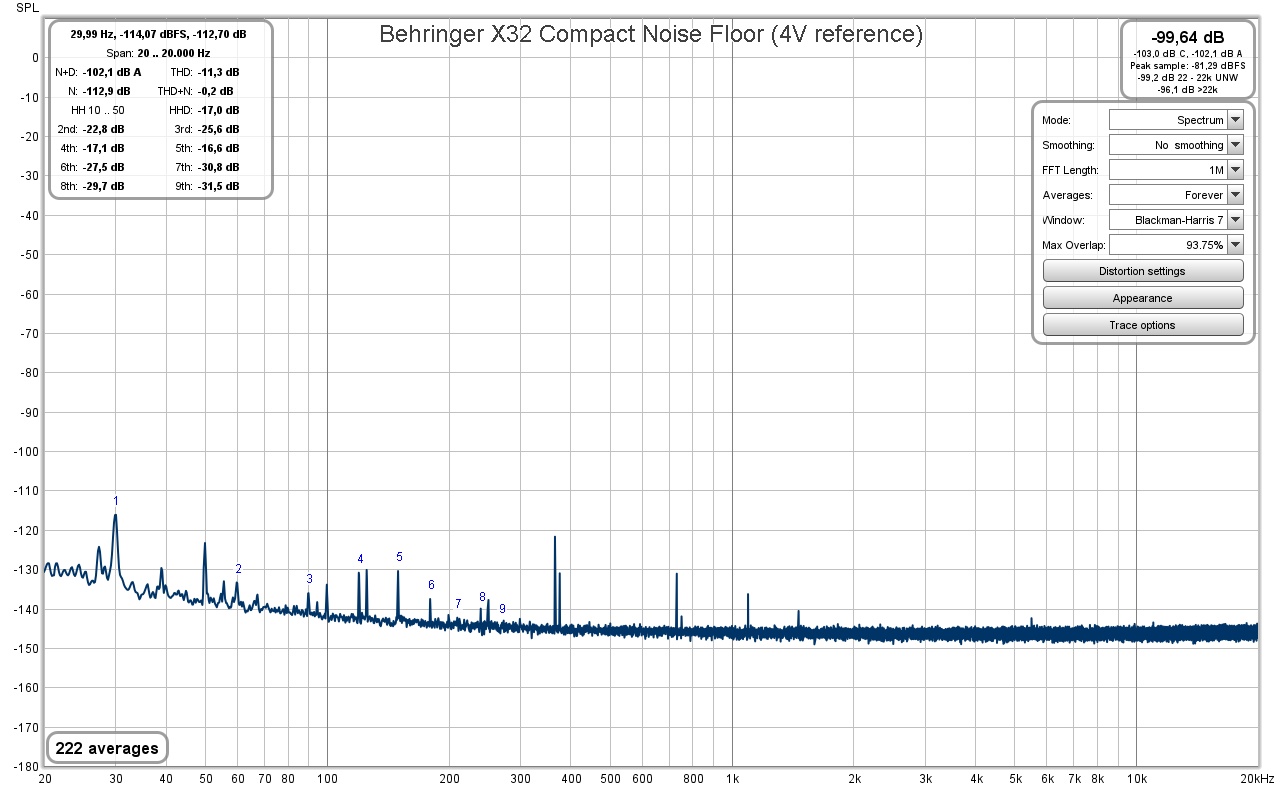 Noise floor with 16 input channels unmuted and at unity gain: 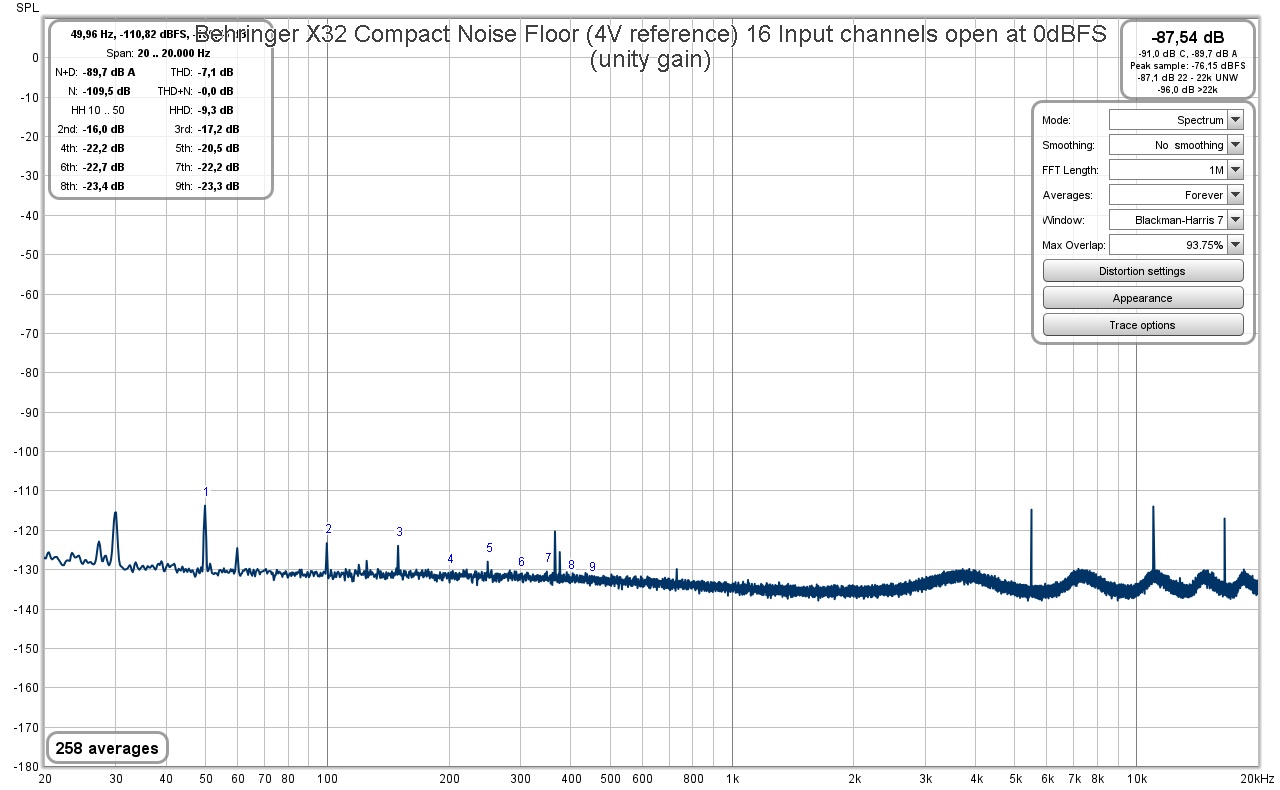 Same thing with all channels with an active gate: 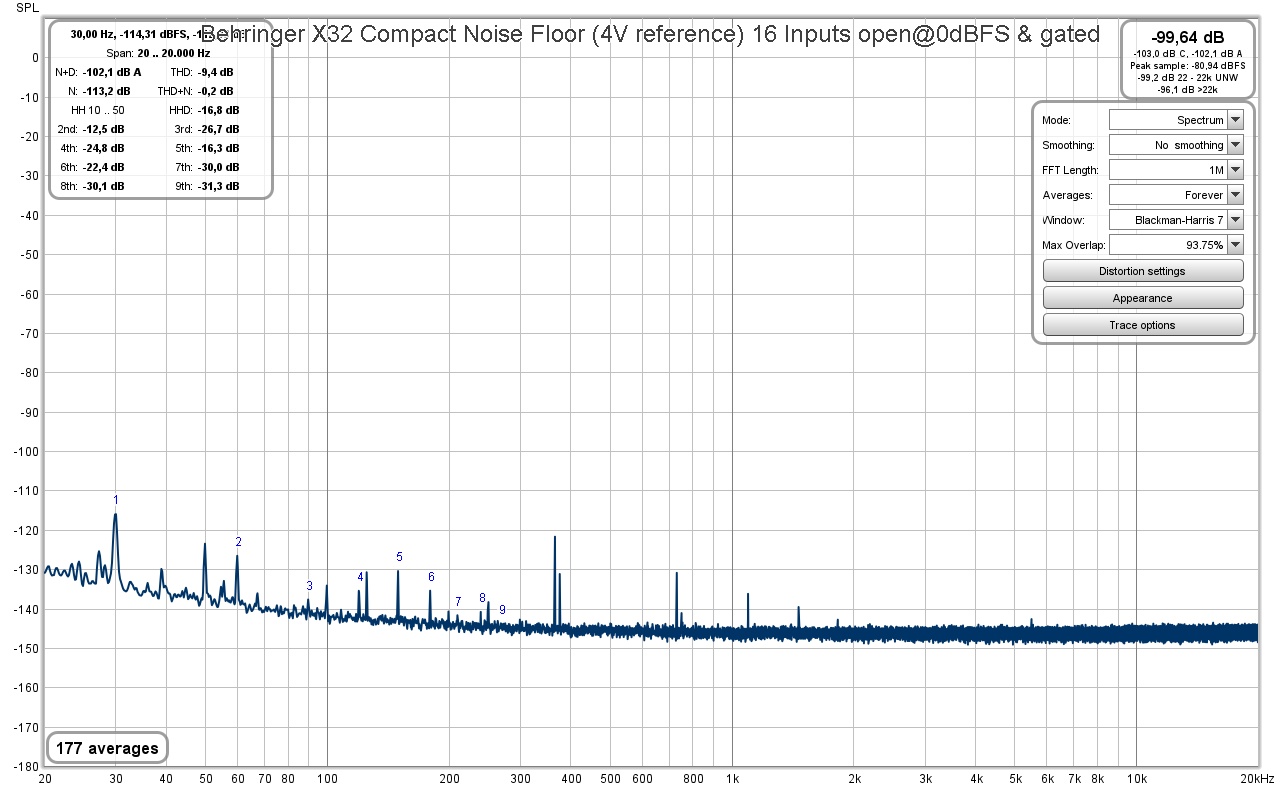 Well the gates work, that's good. They clean up our output spectrum while there is no signal present. Good to use em, even when nothing is plugged in, so you get rid of the preamp noise.

Round trip through analog in → analog out: 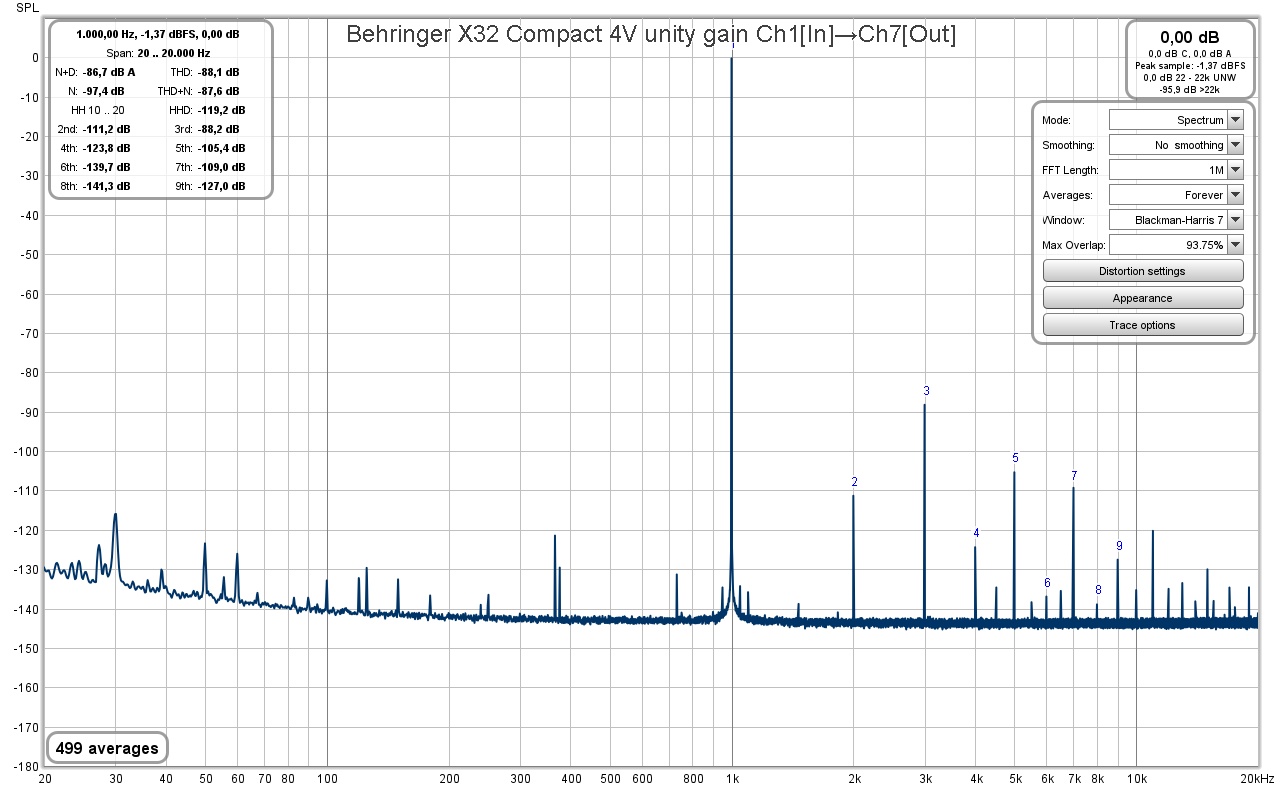 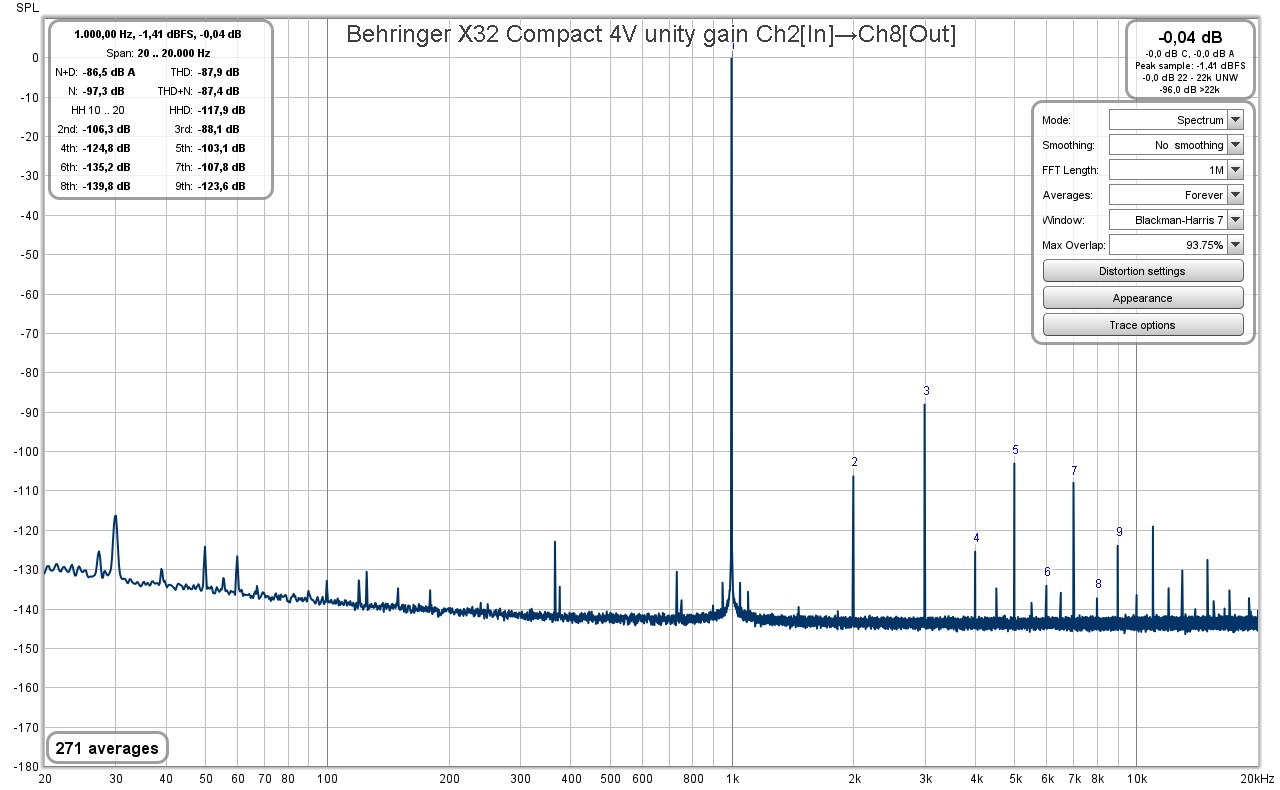 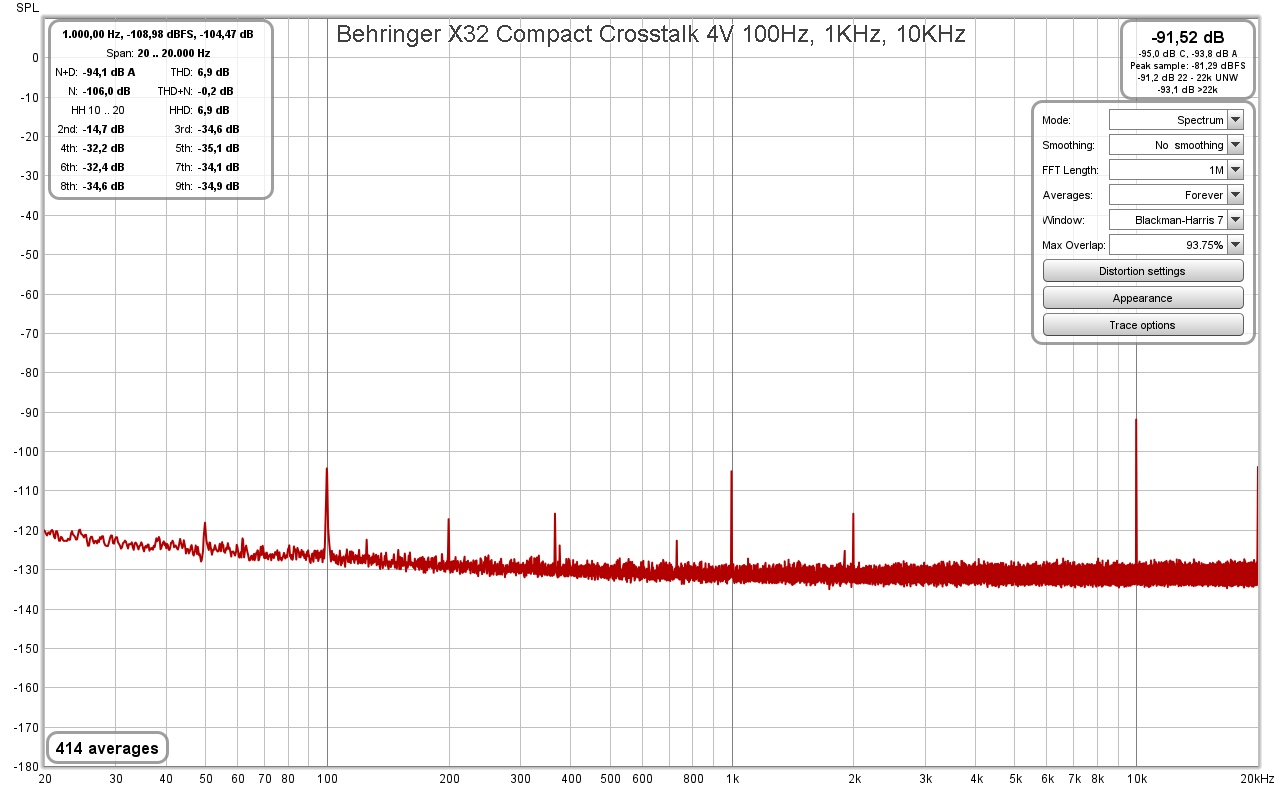 I couldn't get good results on this doing a sweep, so I pulled up the RTA and enabled infinite peak hold (hence the red colour). Test frequencies are as shown (100, 1000, 10000Hz).
I sent a 4V input signal into Ch1, and out Ch7. The RTA shows the output of Ch8 with the input Ch2 open to it at unity gain (to basically get double crosstalk on input and output combined). I'm typically not interested in crosstalk measurements, as I have never seen a device where that would've been an actual issue, but since we could have 40 signals hooked up to this console, crosstalk might add up and become an issue on a quiet channel with lots of gain. This is very unlikely.

During my tests of the ADC I noticed a wierd phenomenon: When I gave it an input signal SINAD would be 80db, but improve to 90db withing half a minute or so.
Leave it alone for a while and you'll measure 80db again, which then improves to 90db just like before. Leave it on for longer or start driving it harder and it'll get worse again. Maybe this is temperature related?

Conclusion: The X32 revolutionized the live scene, as it more or less kicked off the era of affordable digital mixing consoles, which were easy to use at the same time.
I've started working with this console 7 years ago and immediately liked the work flow and layout. My current desk has possibly 'blessed' nearly 100 thousand ears over the last few years and never has anyone complained to me, that the desk (specifically) sounded bad (after the show was over). I just heard that comment once before a show, by a sound engineer who quickly disappeared after his show on his Yamaha QL5 sounded pretty bad compared to mine on the X32. Classic.
Measurements look pretty good if you disregard the distortion of the input section. Is the distortion bad, is it an issue? No. I'm much more bothered by the compressor in the channel strip, which often doesn't react as fast as I'd like (even on 0ms attack time it still sounds like 5ms). This console packs one hell of a feature set into one device. I use it with a X32 rack as stage box. The desk stays at home for smaller shows and I just take my tablet with me. Convenience and ease to use it very important imo and the X32 got that down.
Until I get booked for jobs that pay well enough to justify a DiGiCo S21 or something Soundcraft, I'm gonna keep the X32. It's a good ecosystem and performs well, if you know how to work with its limitations. Measurements revealed that you won't have to worry much about the technical performance of the ADC or DAC. If it sounds bad the fault lies somewhere else.

If anyone wonders: afaik the entirety of the X32 line share the same internal components (including the stage boxes), while the XR line seems to use different stuff. At least I got the impression that the XR18 I used had a higher noise floor (because it was the only device I ran into noise-related issues with). Apart from that, the XR line also has less processing power and features. When I worked with it, I missed a few things I had in the X32, but can't quite remember what it was, since that was several years ago.
Happy new year, all!
EqualizerAPO → Topping EX5 → HiFiMan HE6se
Topping EX5 → Hypex FA123 → Jim Holtz's Bordeaux

hi
yes it seems to be a great cheap console.
can tell me if you can put an adat card on the x 32 core ?

www.behringer.com
at the place of the usb card
thanks
weesch
OP

weesch said:
hi
yes it seems to be a great cheap console.
can tell me if you can put an adat card on the x 32 core ?

www.behringer.com
at the place of the usb card
thanks
Click to expand...

peniku8 said:
The X32 Core should accept the X-ADAT card
Click to expand...

I have not tried it and neither am I a Behringer employee, so I can't really say for sure. I don't have an X32 core, since I have an X32 rack.
EqualizerAPO → Topping EX5 → HiFiMan HE6se
Topping EX5 → Hypex FA123 → Jim Holtz's Bordeaux

Hi
Oky
but if it work on x32 rack it should work on x32 core...
the better i think
is to ask behringer if it work...
Thanks for reply
best regards
weesch
weesch
You must log in or register to reply here.

The Signal Chain: How do noise and distortion propagate through my system?
2

Sunday at 9:10 AM
nerdstrike
N

Is my Topping D10b broken?