The Behringer ULTRA-DI DI20 is a cheap DI Box. DI boxes are usually used on stage to convert an unbalanced source into a balanced source for transmission over longer distances, e.g. from a keyboard to the FOH mixing console:
DI boxes also offer a ground lift switch to break a ground loop which may induce hum into the system. Therefore you can use them also in a stereo or HT system if there is a problem with ground loops or hum, e.g. when a satellite receiver is connected to the amplifier.

DI boxes come in two flavours:
The DI20 belongs to the latter flavour. It contains 2 channels (which can be linked to feed a mono signal into 2 different inputs) and an attenuator which is switchable between 0 dB, 20 dB and 40 dB attenuation. It contains a ground lift and can be fed by 48V phantom supply or a 9V block battery. The housing is made of aluminium but I would not rate it as stage proof - meaning you should not step on it with full weight or roll a rack over it. The switches would not survive such rough treatment. But for a price of around 21 € you cannot expect that much as stage proof DI boxes are usually 5 to 10 times more expensive.

I bought the DI20 for connecting a Notebook to a mixing console when doing multimedia shows, both for myself and for the local Alpine Club where I organize the monthly shows. No one can step on it so no hard handling expected. It saved several shows where without the DI20 hum and noise would have hampered SQ a lot, so it really works.

This is how it looks like after a few years of (little) use. View from the top: 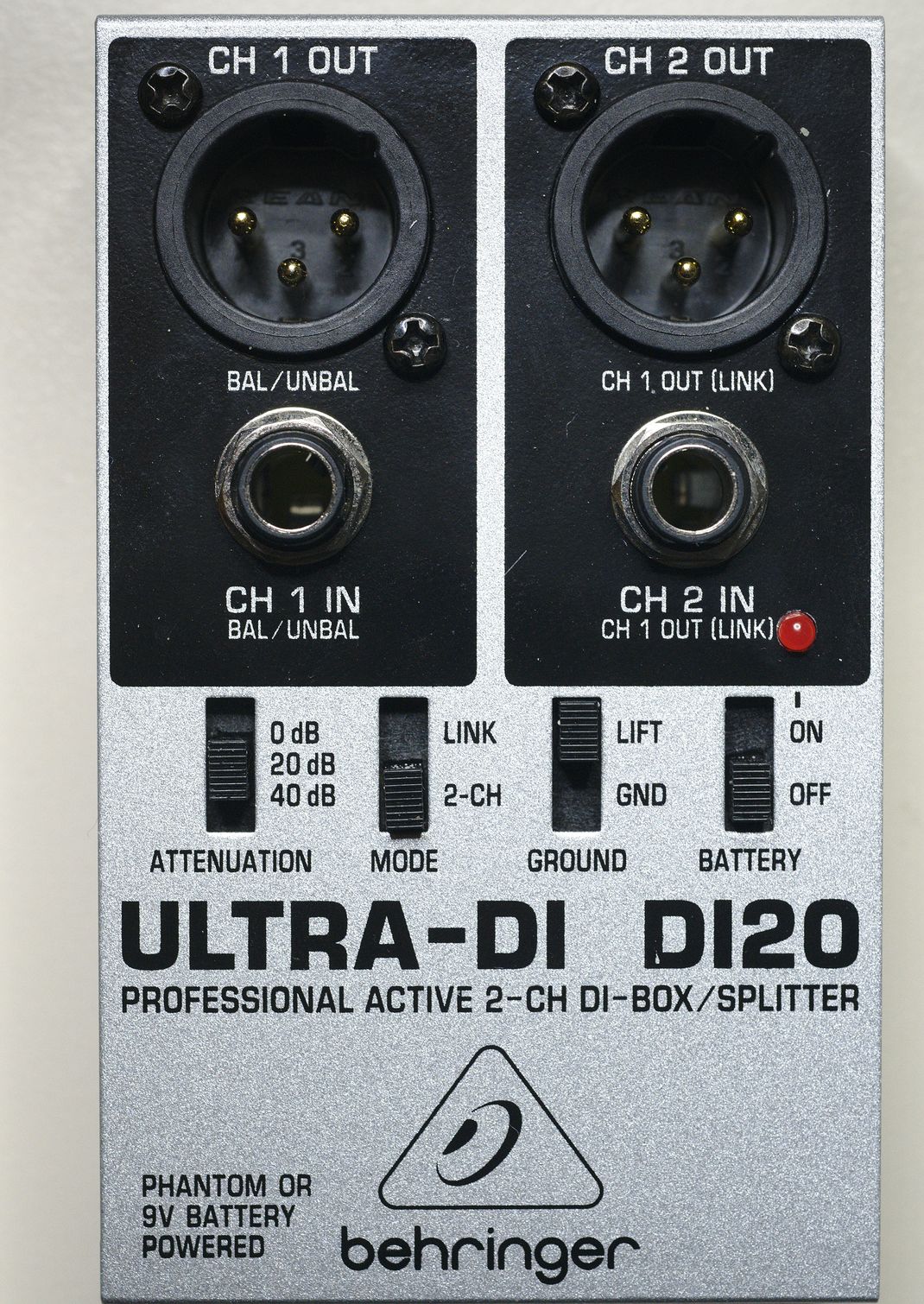 View from the side: 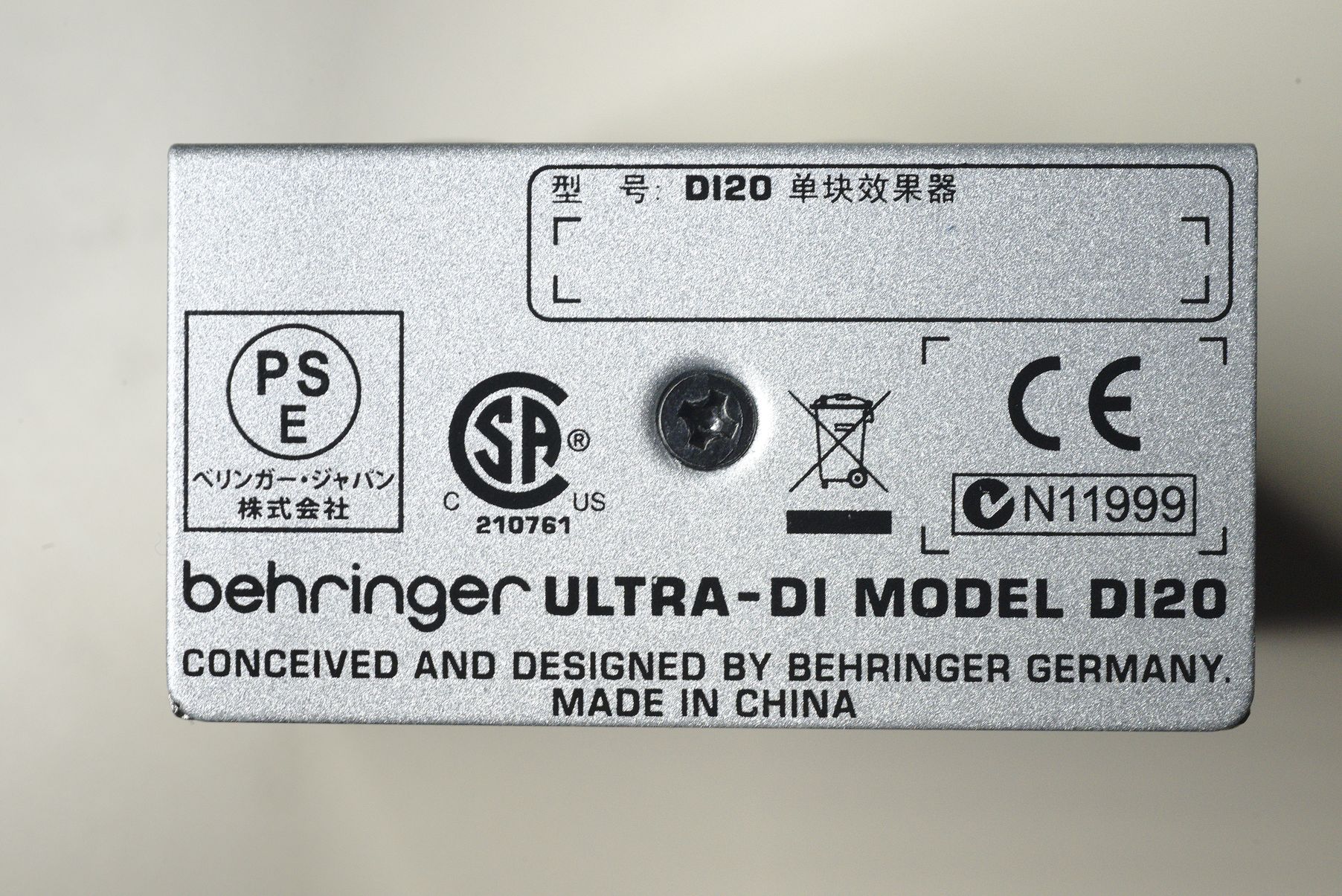 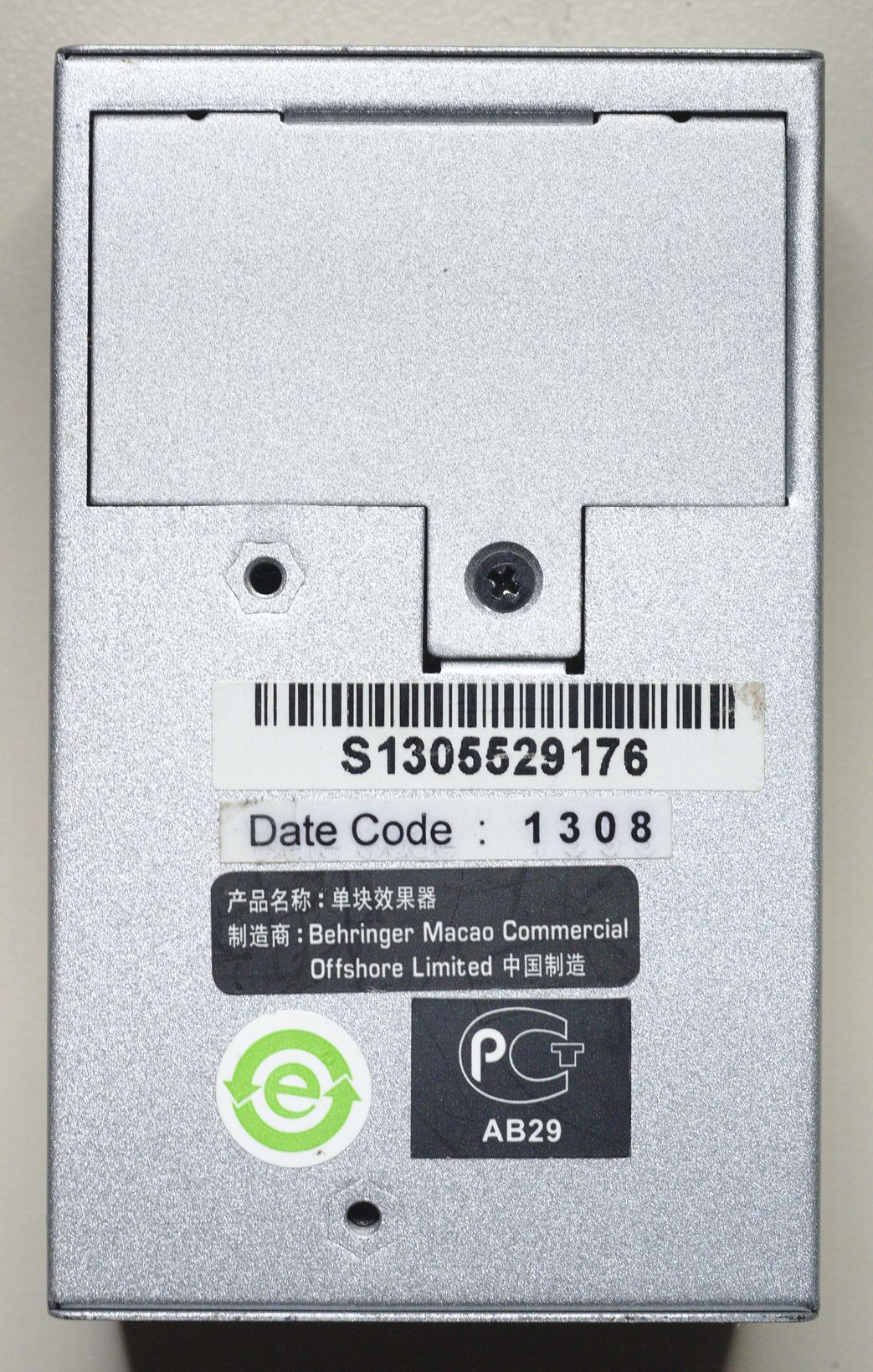 Looking Inside
Since I'm the owner and the DI20 is no longer under warranty I gave myself permission to open it. To do so you must remove 2 bolts on the short sides, the 4 bolts of the XLR outputs and the 2 nuts of the TRS inputs, like shown here: 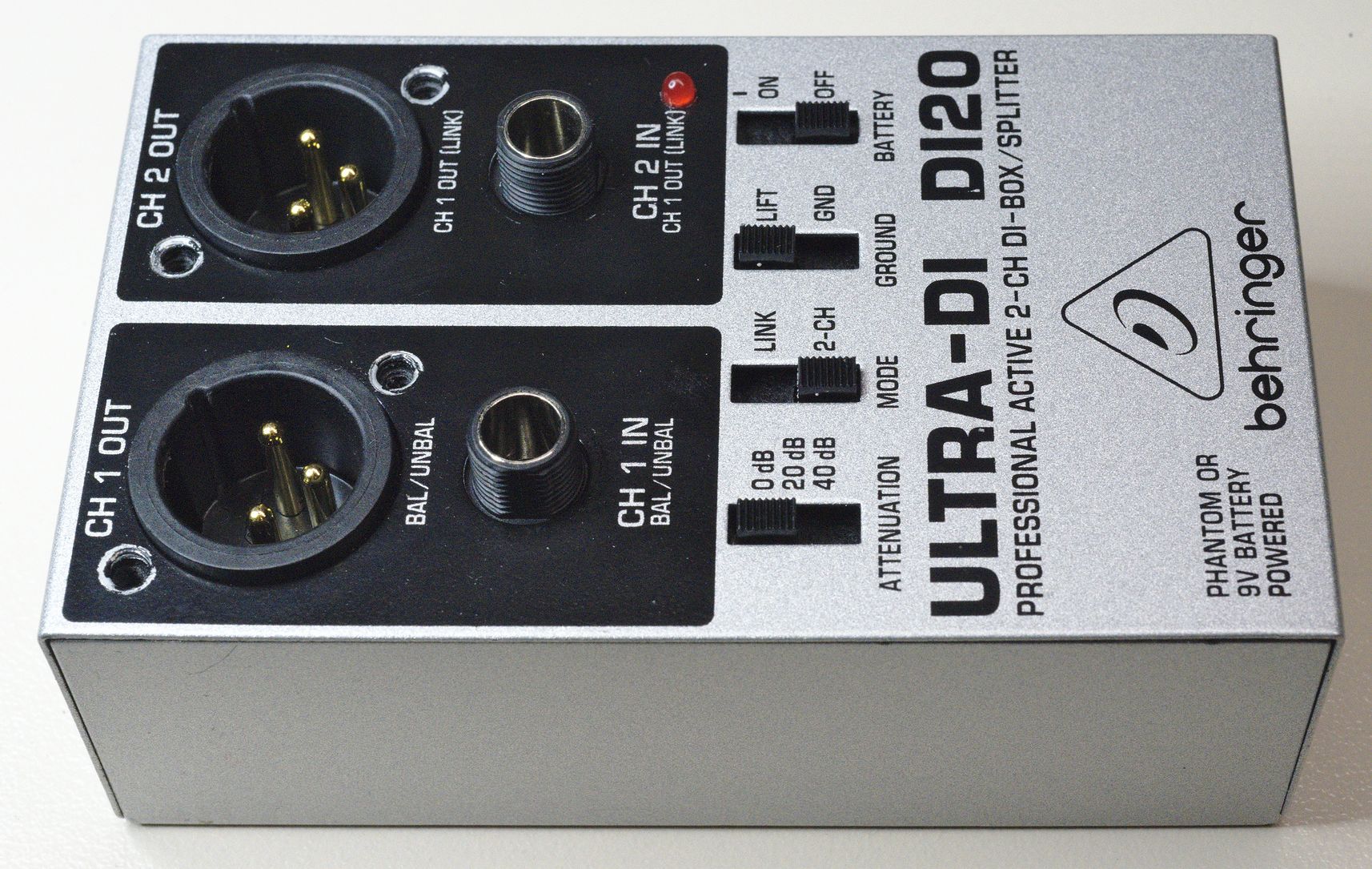 Now you can lift the cover to see this: 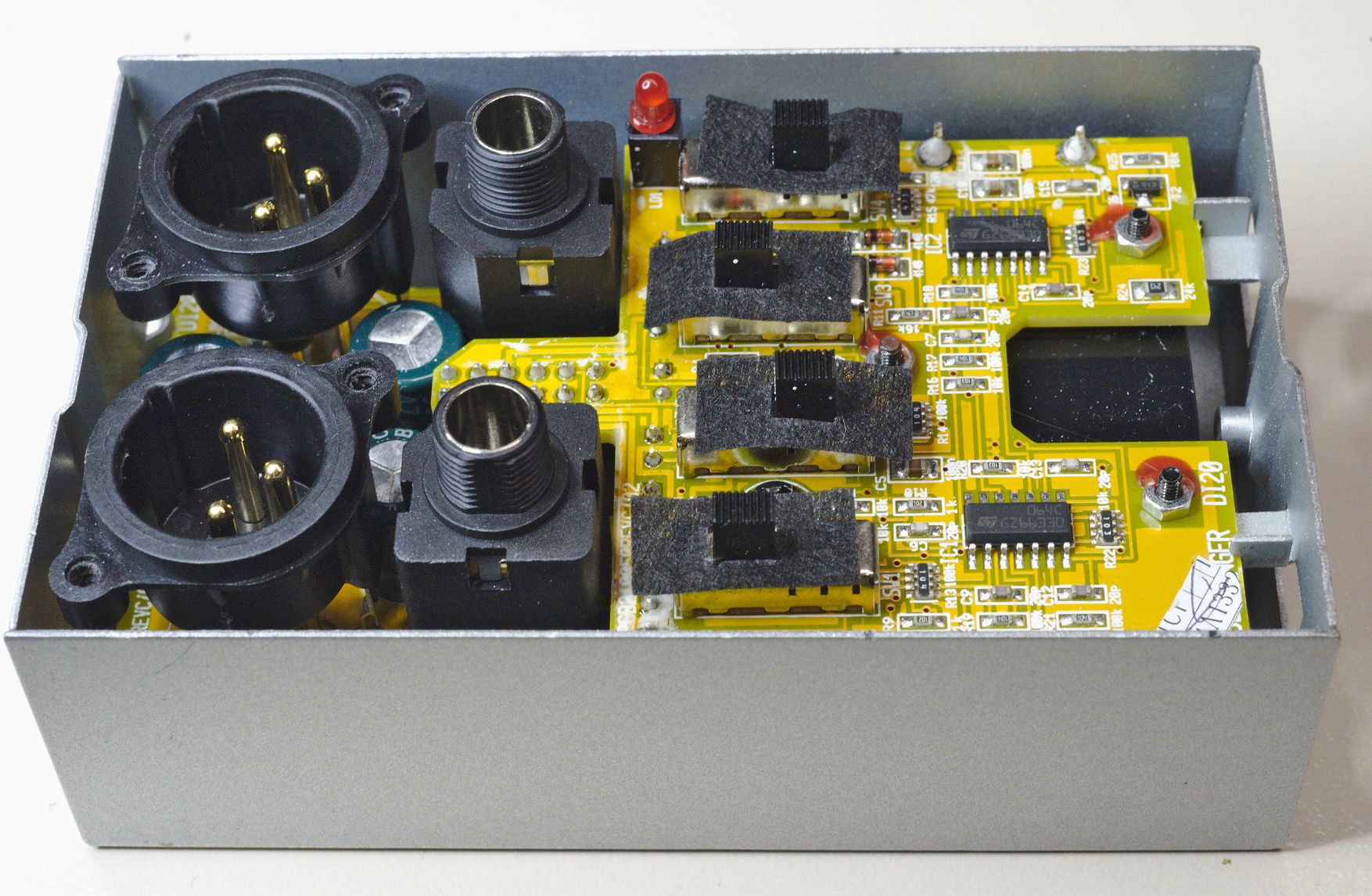 Remove the felt strips of the 4 switches and you see the main PCB: 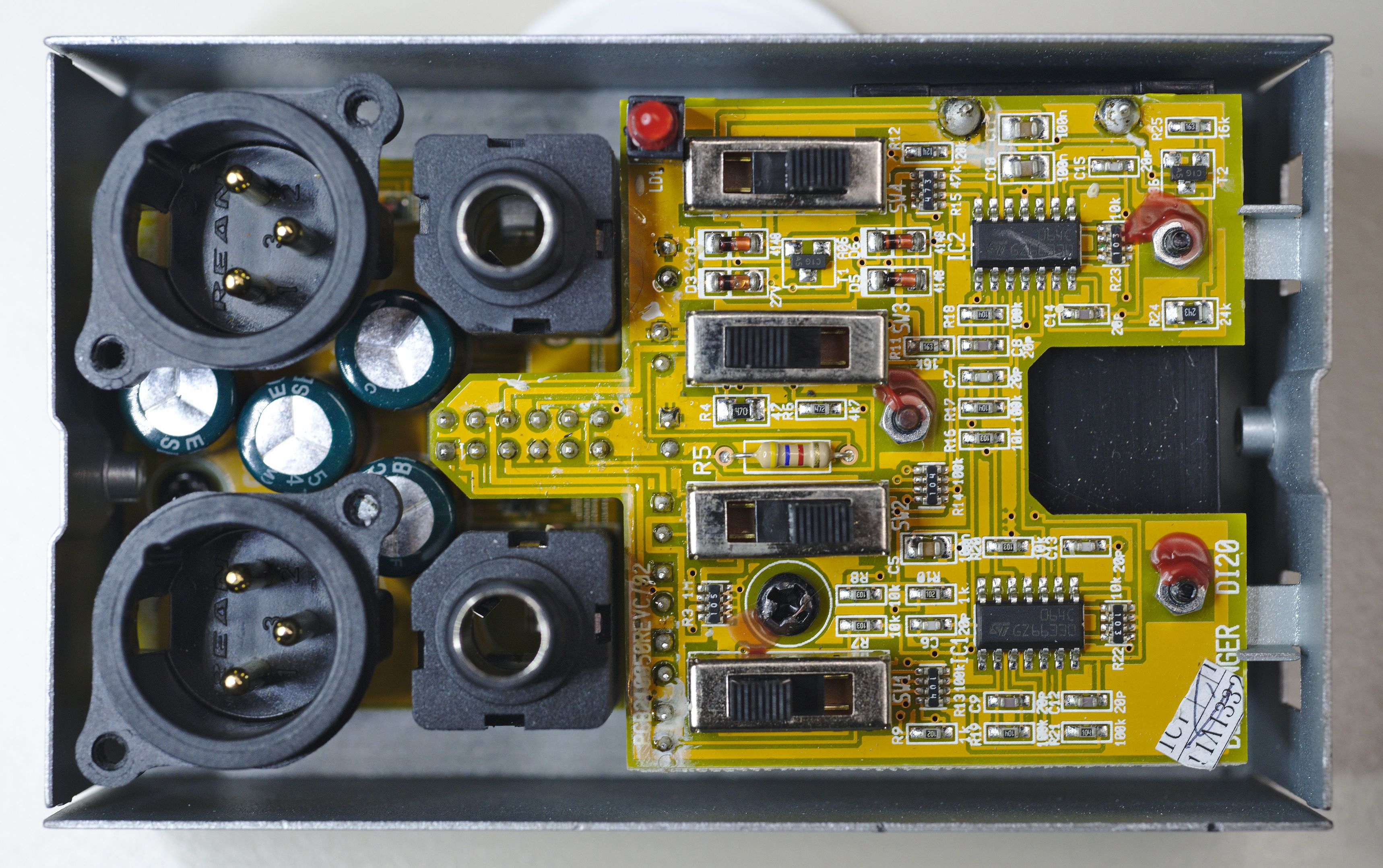 Actually, I don't know these chips. (EDIT: I thinks it's a TL064C made by STMicroelectronics ). Since the nuts were sealed I stopped the teardown here. Looking through the open battery compartment reveals the backside of the main PCB with several decoupling caps:

Dashboard
Lets start with the Dashboard, channels driven with 0 dBu (spec) and the RME as loopback in the background (green): 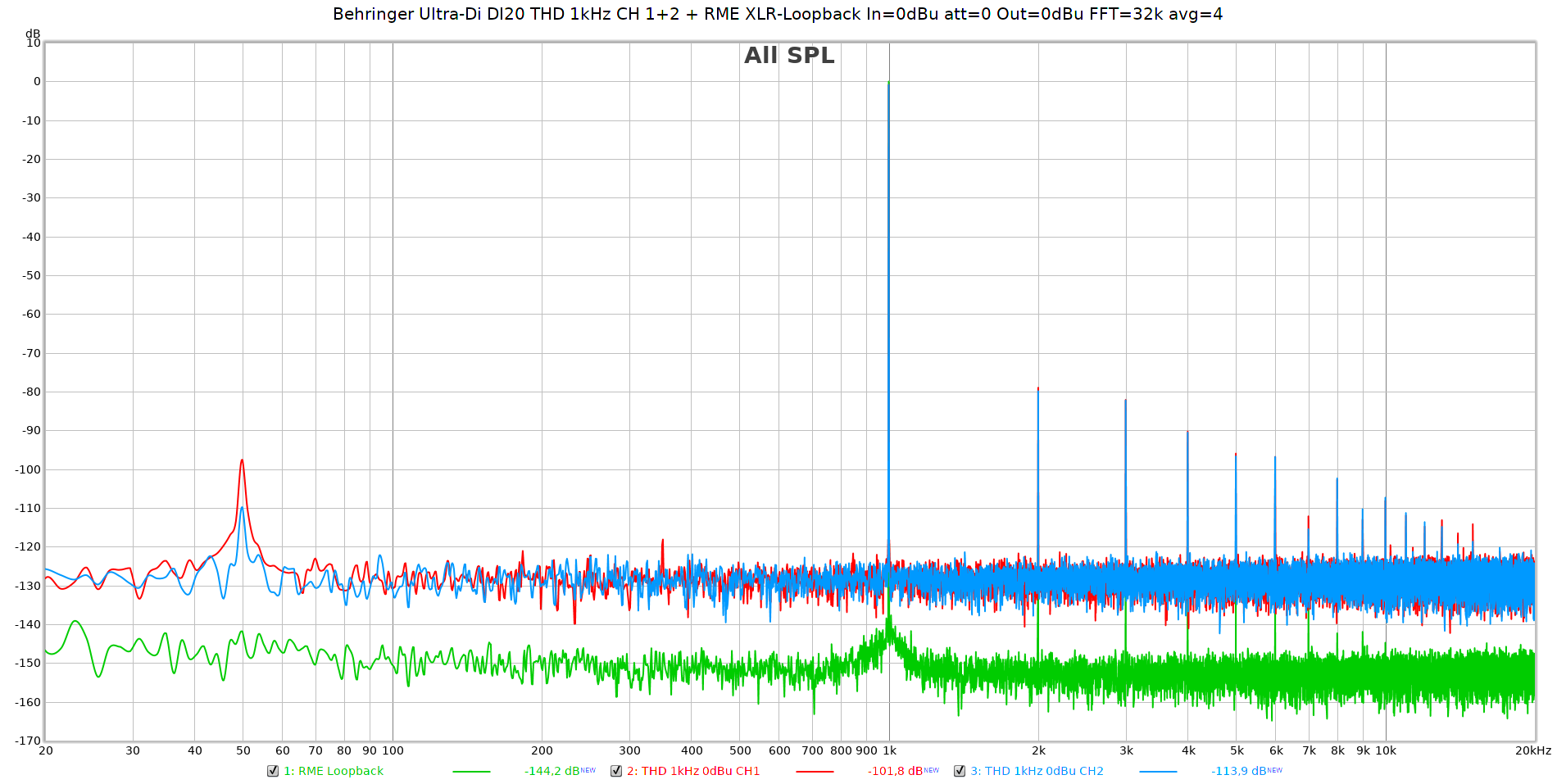 THD: very close to spec, so nevermind.
Noise: noise may be dominated by the 50Hz peak, which is well within the inaudible region and independent of the supply (same results for battery supply and phantom supply). The 50 Hz peak does not even change when the DI20 gets no power at all, and it rises if I touch it with my hand. It also stays the same if I disconnect the XLR cable from the DI20s output. It disappears when I connect the XLR cable to the RME itself as one can see in the loopback result. Therefore I cannot say whether the specified 100 dB may be reached without thew 50 Hz peak. On the other hand you should expect similar behaviour in a real world application.

Behringer specs the maximum input voltage as +12 dBu so I feed it with such a signal as well: 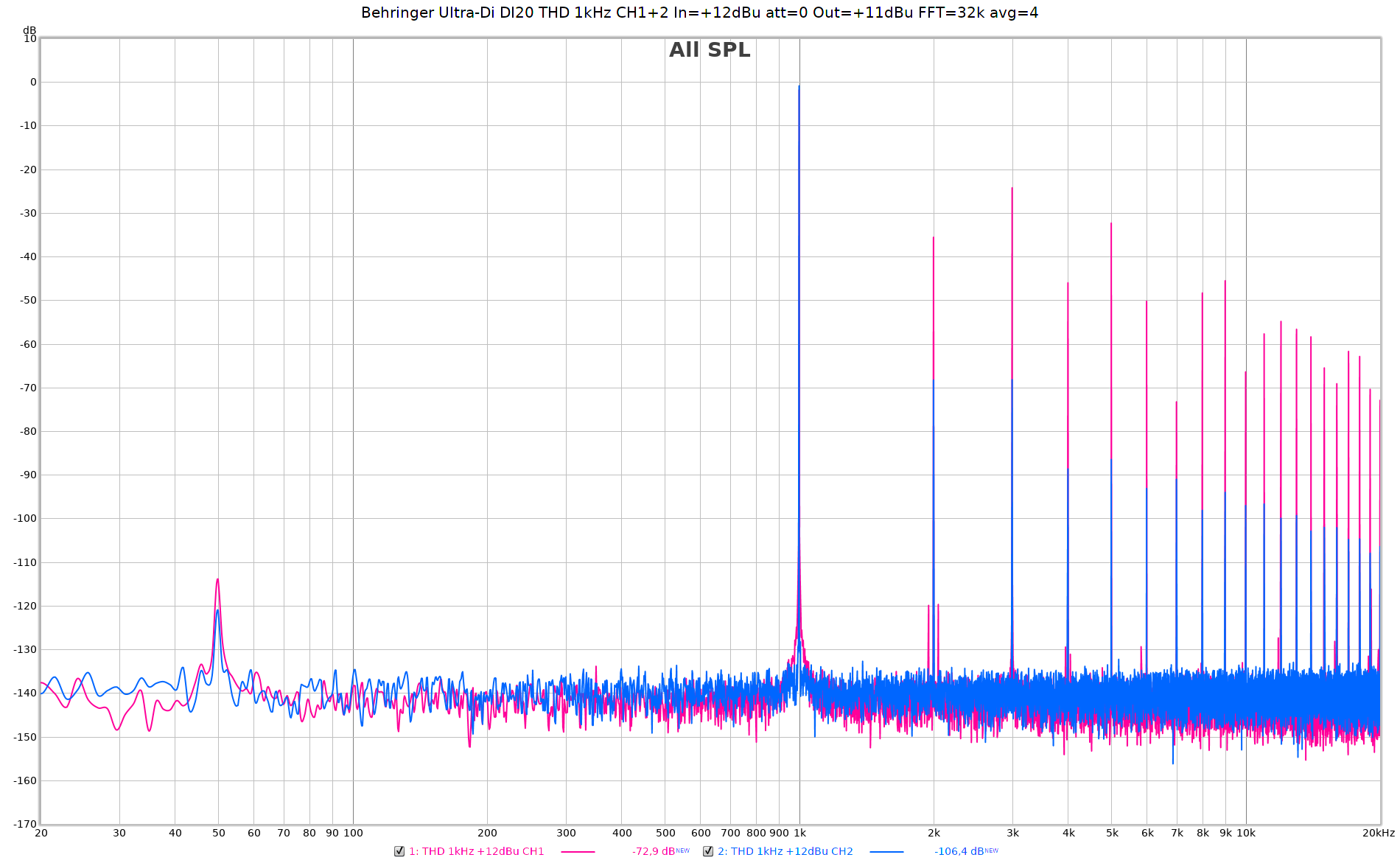 Not good. Channel 1 is OK but channel 2 seems to clip severly. I reduced the input voltage of channel 2 until it did no longer clip which was +10.5 dBu, and then it looks similar to channel 1 at +12 dBu: 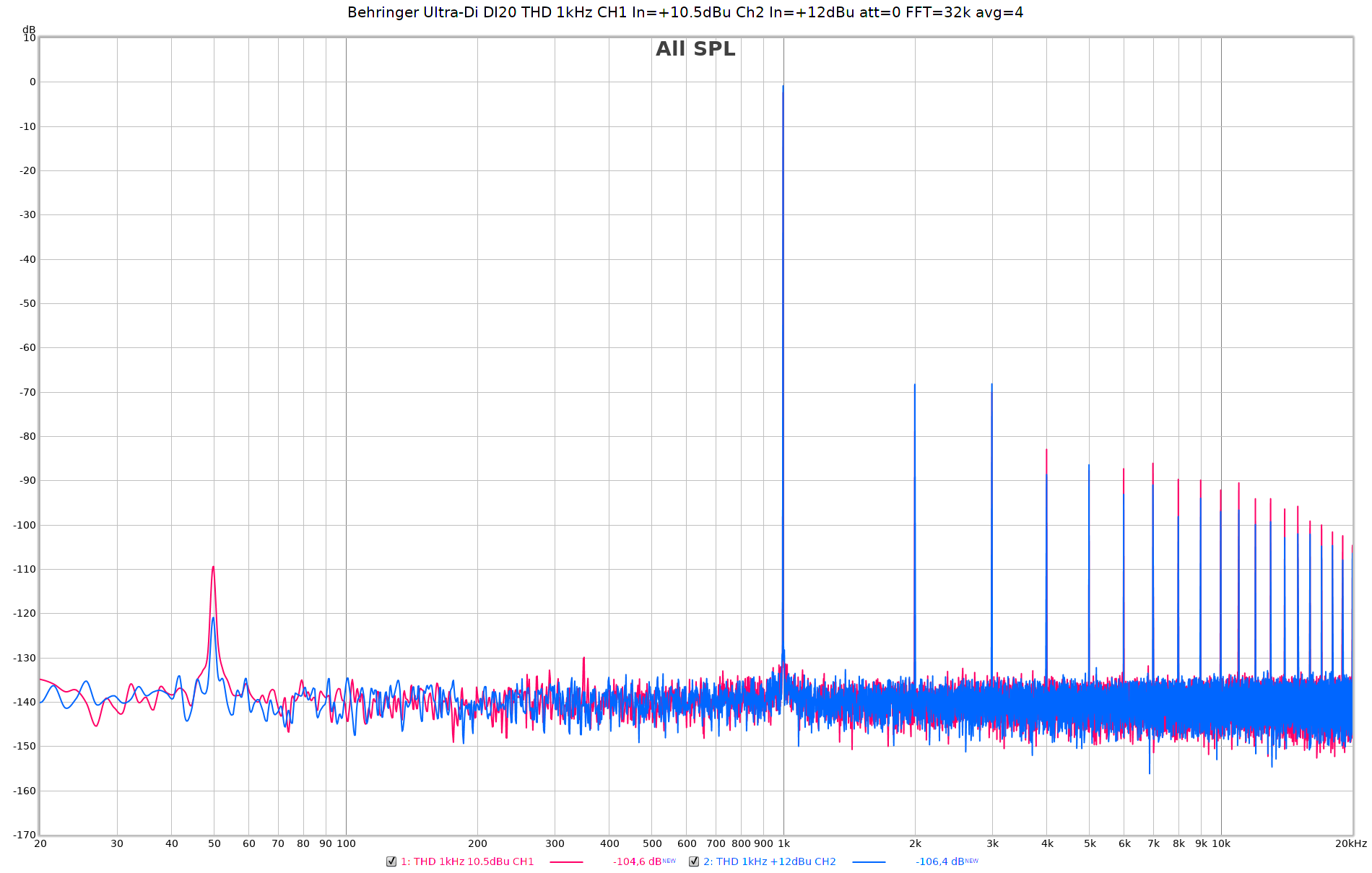 Anyway, THD is more than 10 dB worse compared to the rated input voltage, so one is well adviced to activate the attenuator
to keep THD low. 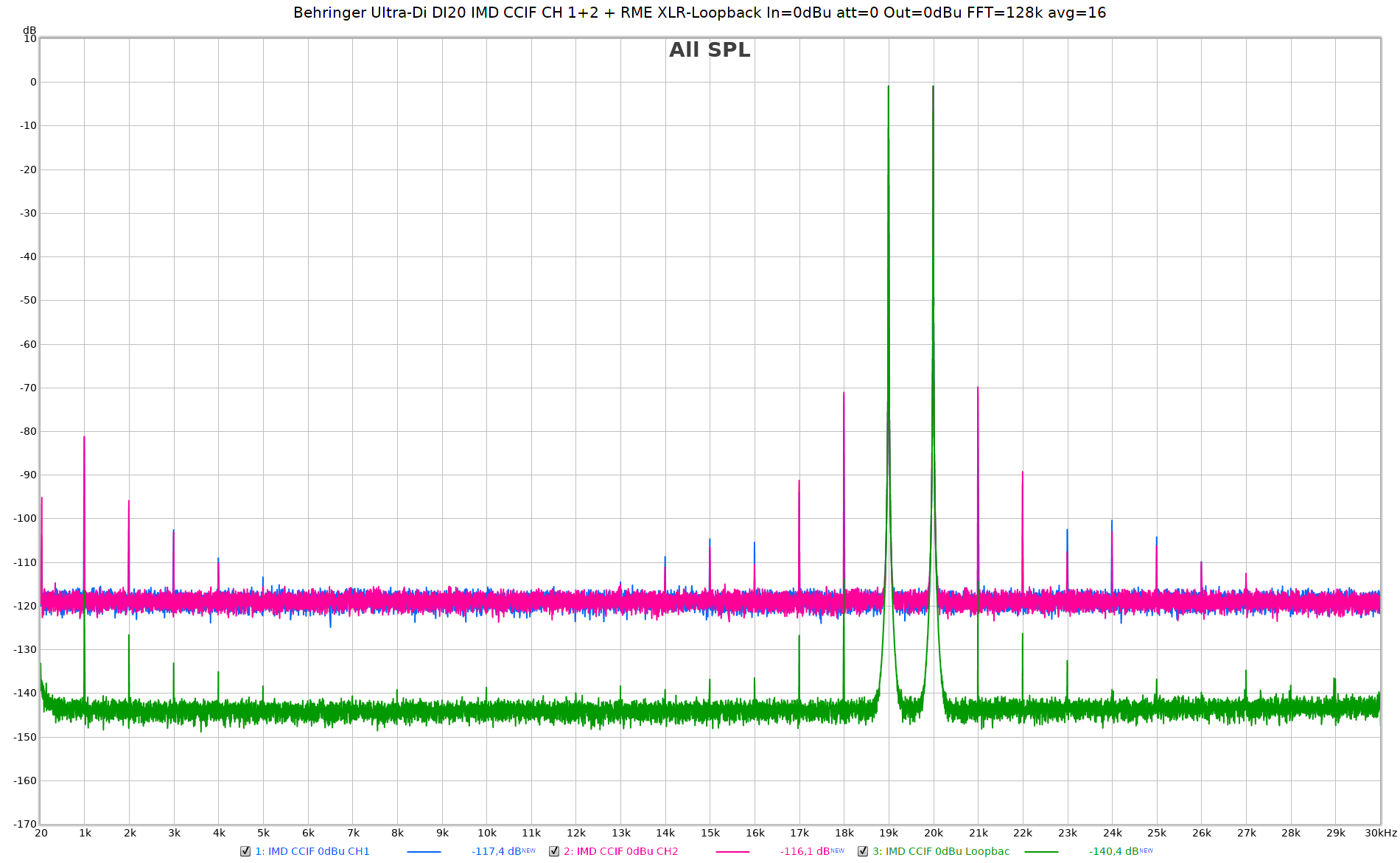 Multitone
I fed the multitone signal with 32 frequencies to simulate music at 0 dBu, again with the RME loopback (green): 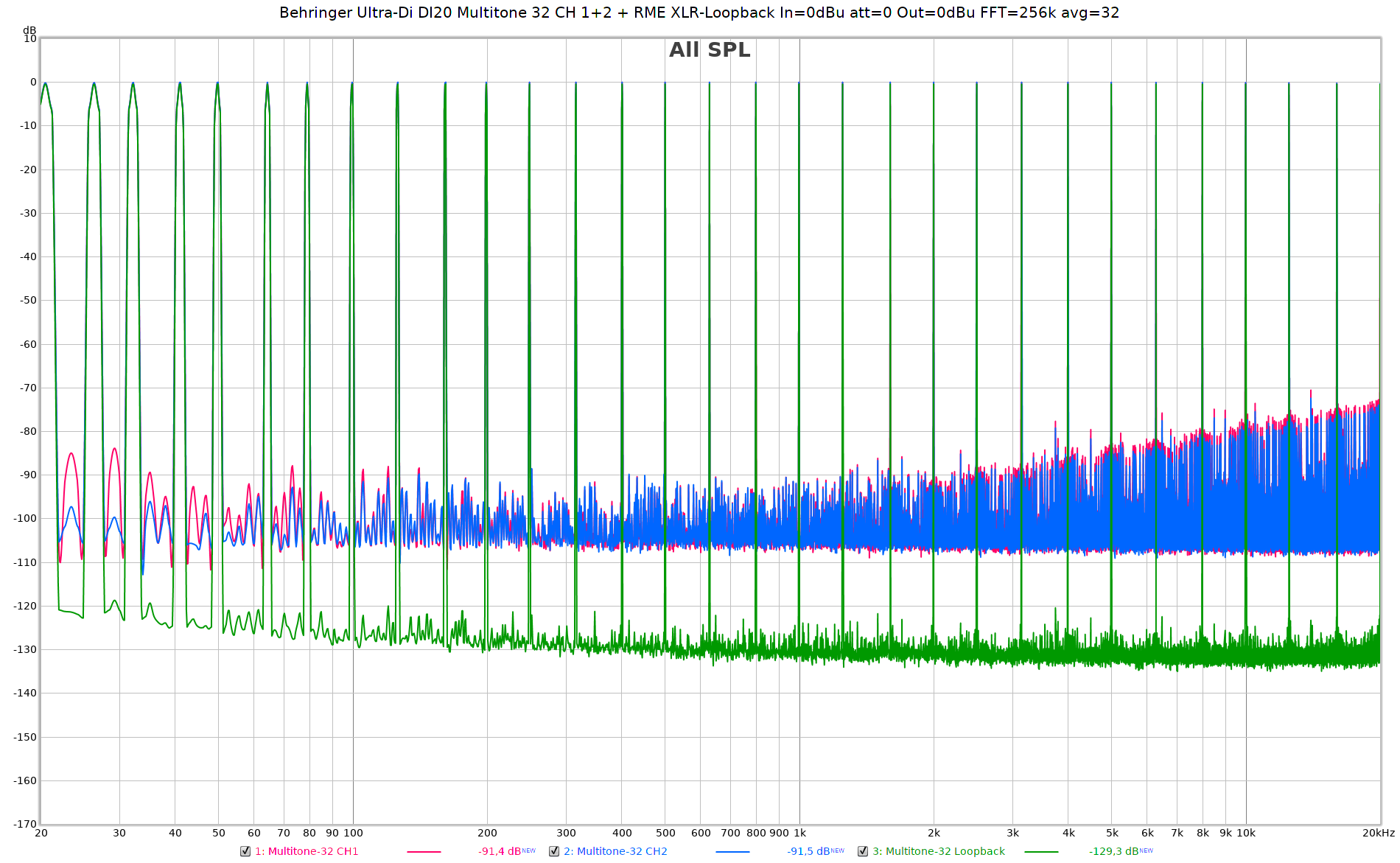 Well, not so good. Distortion rises quite a lot with frequency. 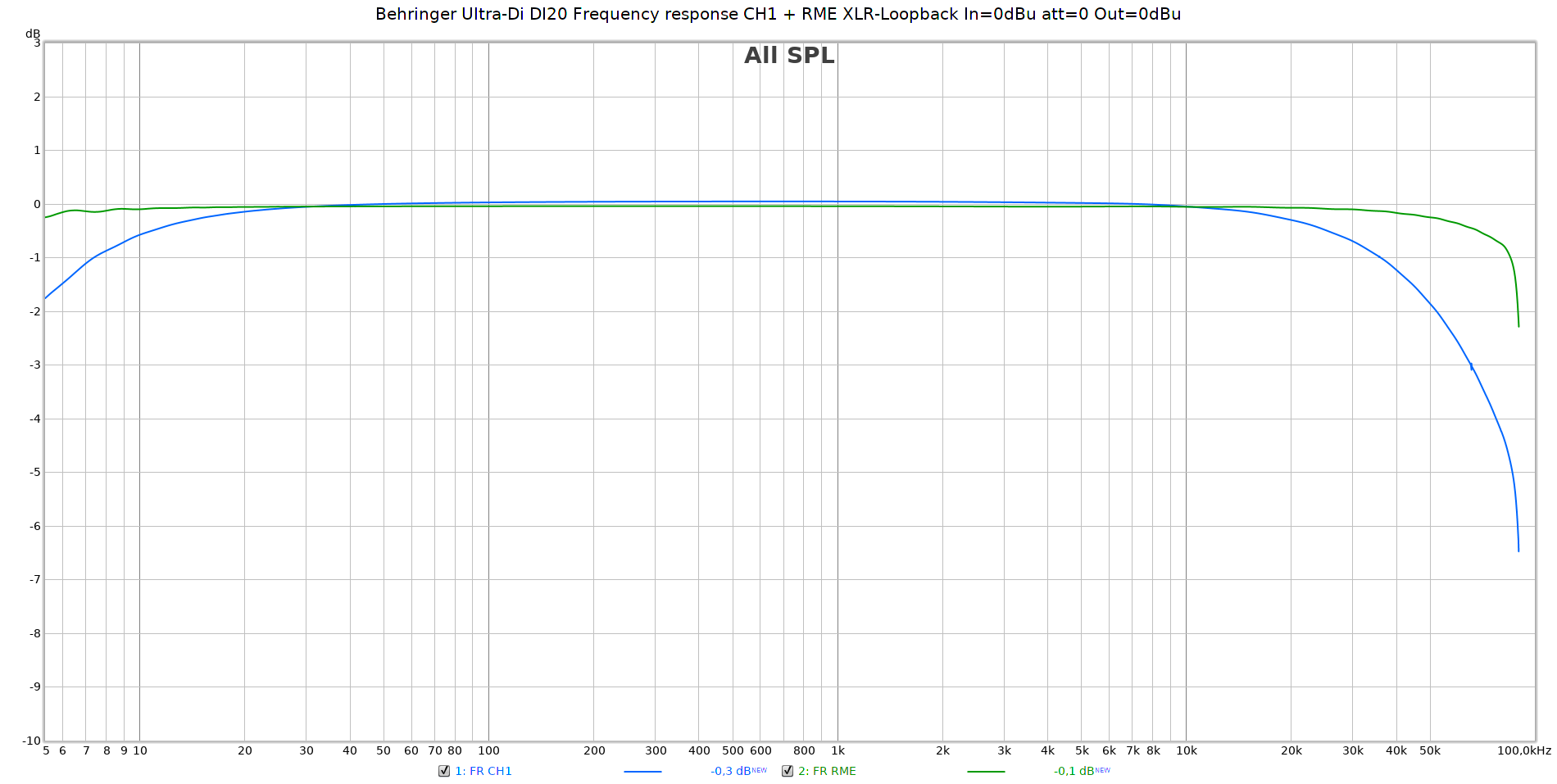 Not ruler flat as the RME, but definitely good enough and certainly within specs.

Conclusion
Well, you get what you pay for. I would not use it in places where I expect rough treatment. If in doubt activate the attenuator to ensure that the DI20 does not clip. At the rated input voltage you still have 10 dB less noise than THD so you don't have to pay much in doing so.

If you take this in account I happily recommend the DI20 as a cheap and reliable problem solver. You have to keep in mind that a signal with perfect sound quality which suffers from induced hum sounds much worse than a not so perfect signal (having passed the DI20) without induced hum.
Last edited: Nov 18, 2019

Thanks!
independence, we do it together..
https://www.patreon.com/audiosciencereview

Great work also from me. I use a load of these at our radio station to balance unbalanced sources like CD players and laptops/iPods into our main desks. With a 2v (+8dBu) input from a CD player or laptop it's well below clipping yet keeps noise well down. At their price, I can't fault them, and they have been working 24/7 for 10 years now without a single failure. I run them off cheap 'battery eliminator' supplies with an extra 220uF capacitor for good luck. Great little boxes and much cheaper than a pair of good quality transformers.

I use a couple of these and for the price they do their intended job well and have actually been very robust and reliable.
I used to fly, but I go the modern way now, by bus.
R

I own a few DIs myself.

The other 2 I have here are Radial J48 (which requires phantom power supply) and Apex dBDI-2
https://www.apex-audio.be/products/dbdi/
Both are active.

Love the excellent photographs.
Ricky Roma: I subscribe to the law of contrary public opinion... If everyone thinks one thing, then I say, bet the other way...
OP

Thanks. Shot free hand with a 7 year old Nikon D800 and a much much older (+30 years?) Nikkor AIS 55 micro, perfect for the job. Lighting by an LED working light. RAW converter darktable. Down conversion to 25/50 % with imagemagic.

What a fabulous little lens. I wish I knew more about the older ones and which were really good as I've walked away from zillions of garage sales with Nikon lenses for peanuts over the years due to a lack of knowledge.

It's on my list now. I see they get very good money too.
Ricky Roma: I subscribe to the law of contrary public opinion... If everyone thinks one thing, then I say, bet the other way...
OP

restorer-john said:
What a fabulous little lens. I wish I knew more about the older ones and which were really good as I've walked away from zillions of garage sales with Nikon lenses for peanuts over the years due to a lack of knowledge.

In this case get a used Tamron SP90 macro lens. It is very sharp and has AF. But also very light (lots of plastic). Probably won't survive 10% of bad treatment the Nikkor (no AF, all metal, all glass, heavy) could handle lefthanded ...

LTig said:
In this case get a used Tamron SP90 macro lens. It is very sharp and has AF. But also very light (lots of plastic).
Click to expand...

I'll definitely keep an eye out- thanks for the tip. I don't have decent macro lenses for either my Nikon or Canon bodies/lens collections. I just prefer the Nikons for pretty much everything and their lens mount compatibility going way back. 50% of my lenses are AFS screw drive and the rest self contained motors- I have no old manual lenses.
Ricky Roma: I subscribe to the law of contrary public opinion... If everyone thinks one thing, then I say, bet the other way...
B

I've used a D120 to drive a stereo signal from a laptop over two XLR cables to a cheap mixing board. This allowed a presenter to control the audio material and proofed us against really bad hum/noise from consumer light dimmers in the hall. No noticeable degradation of the SQ in that environment. Robust and inexpensive. Great review.
E

For each measurement in the main window select SPL & Phase and click on Controls. Here you can add an Offset such that the highest peak is at 0dBFS.
You must log in or register to reply here.

S
What's my amp's actual output wattage to my speakers?