This is a review and detailed measurements of the Barefoot Footprint 01 powered studio monitor (speaker). It is on kind loan from a member in Canada who sent it to me as fair bit of expense. The Footprint 01 costs US $3,950 a pair. Seems likes distribution is a bit limited as I did not find it at some of the major online retailers.

The Footprint 01 differs from its competitors in a number of ways starting with the "PA" enclosure material: 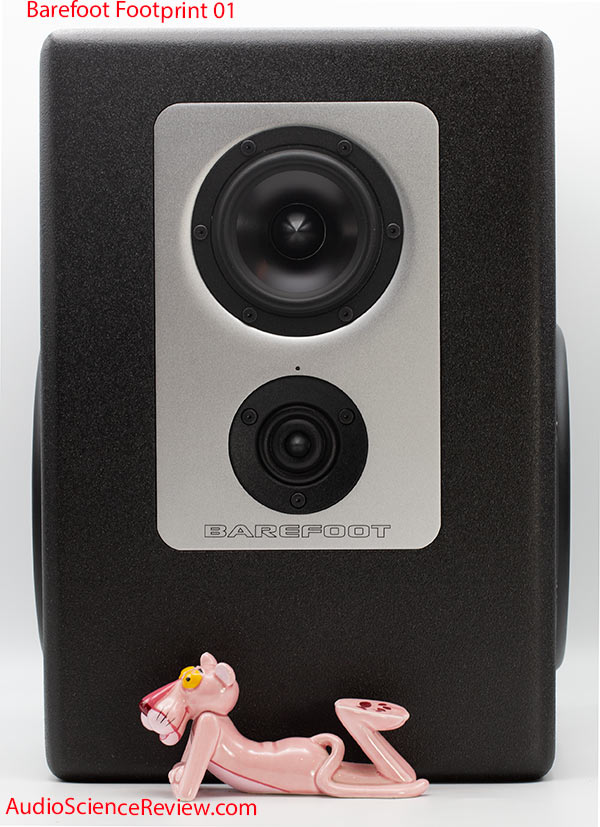 It is super dense material though so other than looking industrial, it seems like a decent choice.

Another departure is dual side-mounted woofers which are crossed at 250 Hz: 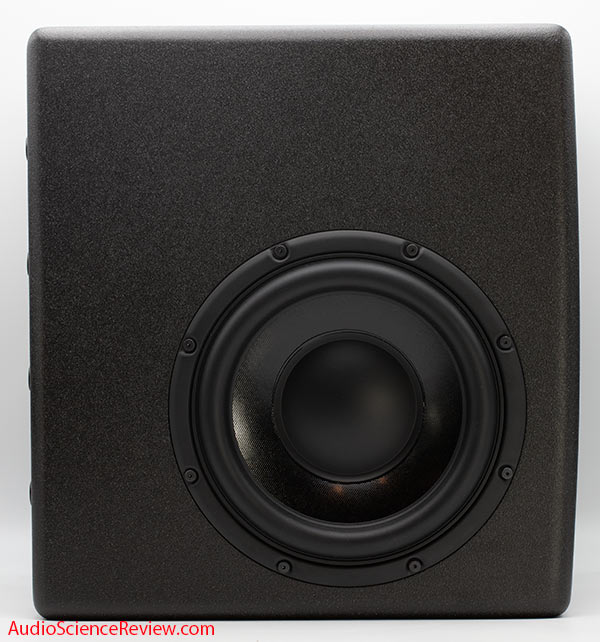 This is a common technique in subwoofers and larger tower speakers to take advantage of vibration cancellation. It worked as combined with the dense cabinet, I could only feel some vibration at the center of the cabinet and the back metal side only.

Note that despite being an active DSP speaker, that only applies to the woofer to mid-range transition (and bass response). The midrange and tweeter are driven by one amplifier so the crossover is passive! Seems like the wrong tradeoff to me as I rather get the midrange to tweeter right than the woofers which get messed with in the room anyway (so need external DSP for correction). But maybe they know something we don't.

Here is the back panel which departs yet again from the norm: 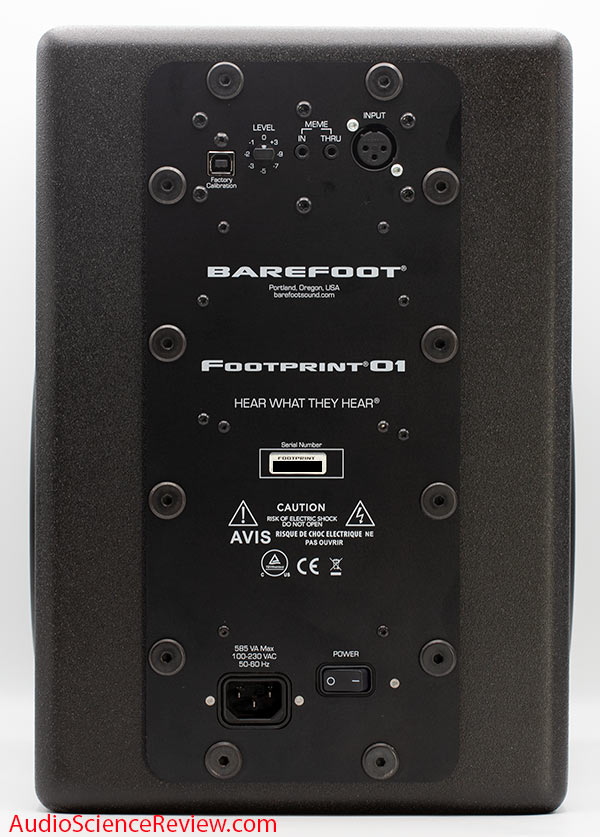 Notice the absence of universal dip switches to tailor the tonality of the speaker. It is replaced with a rotary control (not shown) that mimics a few other speakers/target responses (including distortion???). We also lack digital inputs which at this price range should probably be there.

----
Measurements that you are about to see were performed using the Klippel Near-field Scanner (NFS). This is a robotic measurement system that analyzes the speaker all around and is able (using advanced mathematics and dual scan) to subtract room reflections (so where I measure it doesn't matter). It also measures the speaker at close distance ("near-field") which sharply reduces the impact of room noise. Both of these factors enable testing in ordinary rooms yet results that can be more accurate than an anechoic chamber. In a nutshell, the measurements show the actual sound coming out of the speaker independent of the room.

I performed over 1000 measurement which resulted in error rate of around 1% except for around 4 kHz where it reached about 2% error.

Testing temperature was around 65 degrees F.

Reference axis for measurements was the LED light just above the tweeter as the manual instructs. I actually ran it both at this setting and center of the tweeter and there was no difference to speak of in the measurements.

Barefoot Footprint 01 Measurements
As usual we start with our spin frequency response measurements: 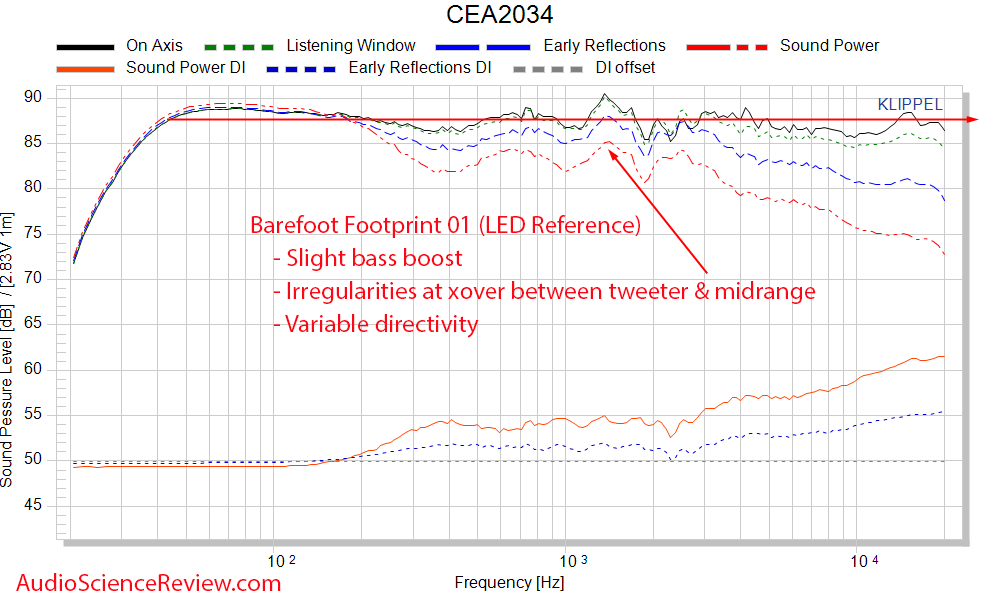 As we see, the passive crossover is not optimal with a prominent resonance at 1.3 khz surrounded by other roughness. Company literature from what I recall talks about uniformity of dispersion but that clearly is not the case with the tweeter getting beamy proportional to frequency to far greater level than I have seen in many speakers much less monitors. This directivity loss is seen in company measurements as well but an entirely different view is shown of the on-axis response: 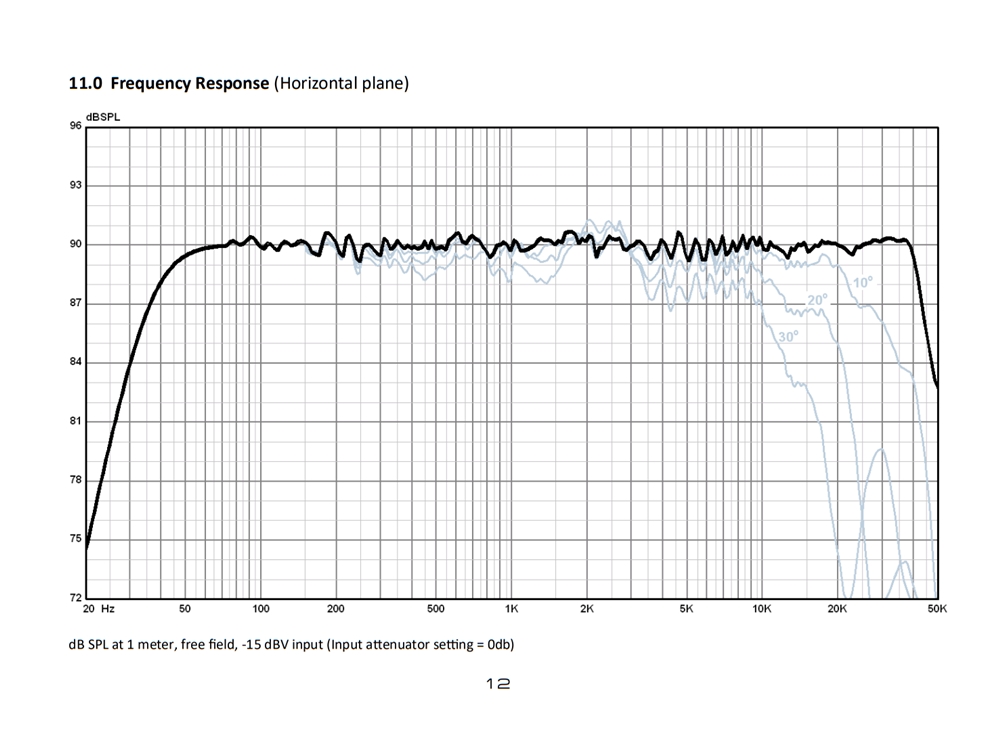 Their vertical scale is zoomed in even more than mine yet they show a remarkably flat response. The explanation may be them using a warehouse with a speaker raised from the floor for measurements which most likely includes some manual tweaks.

Our early window reflections (for far field listening) shows the impact of the drooping side radiation from the tweeter: 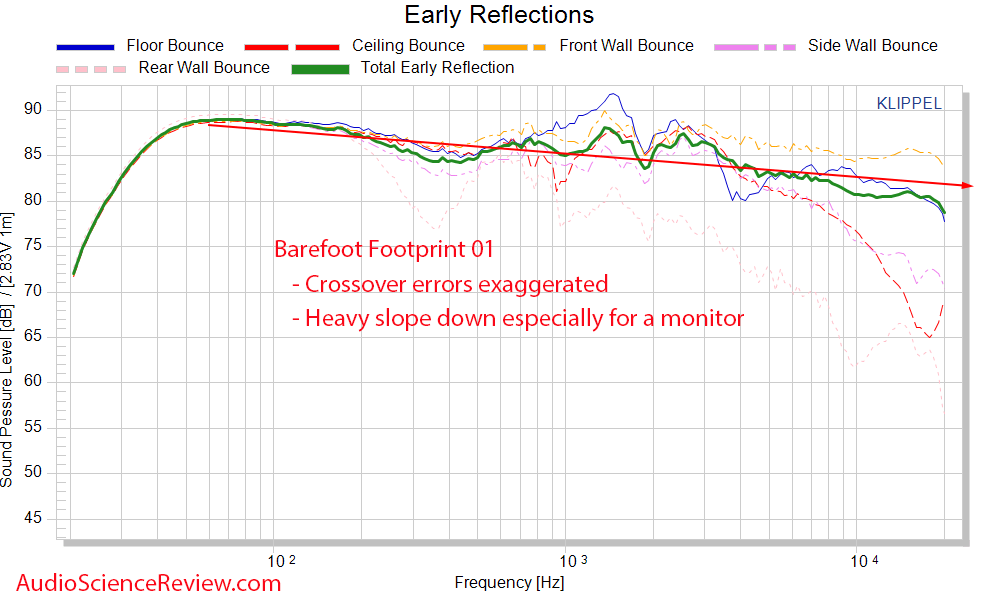 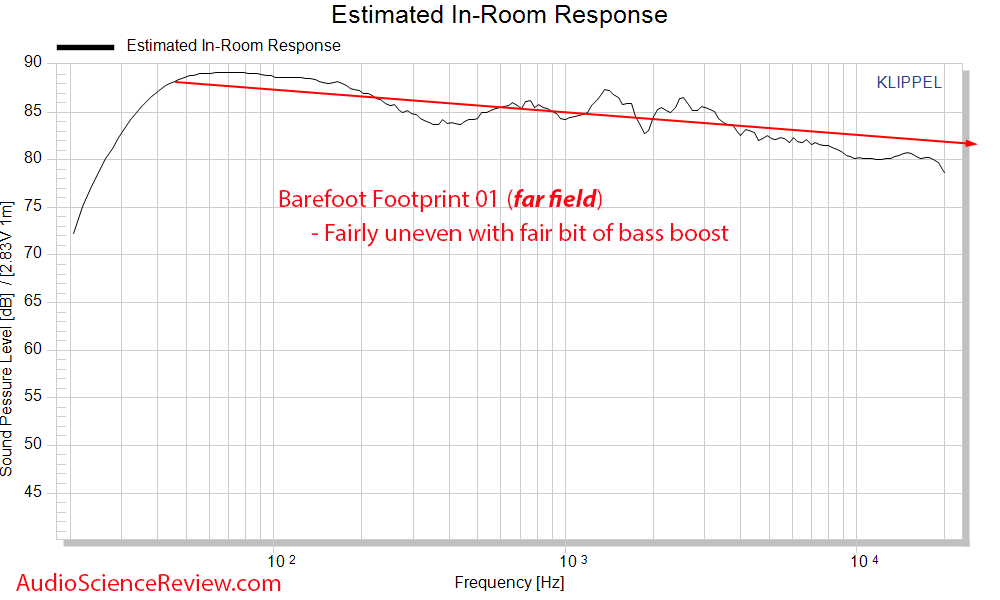 Result will be somewhat boomy sound with some strangeness around 1 to 3 kHz.

Beamwidth plot shows how the woofer is getting directional at 250 Hz before hand off to the mid-range which is not: 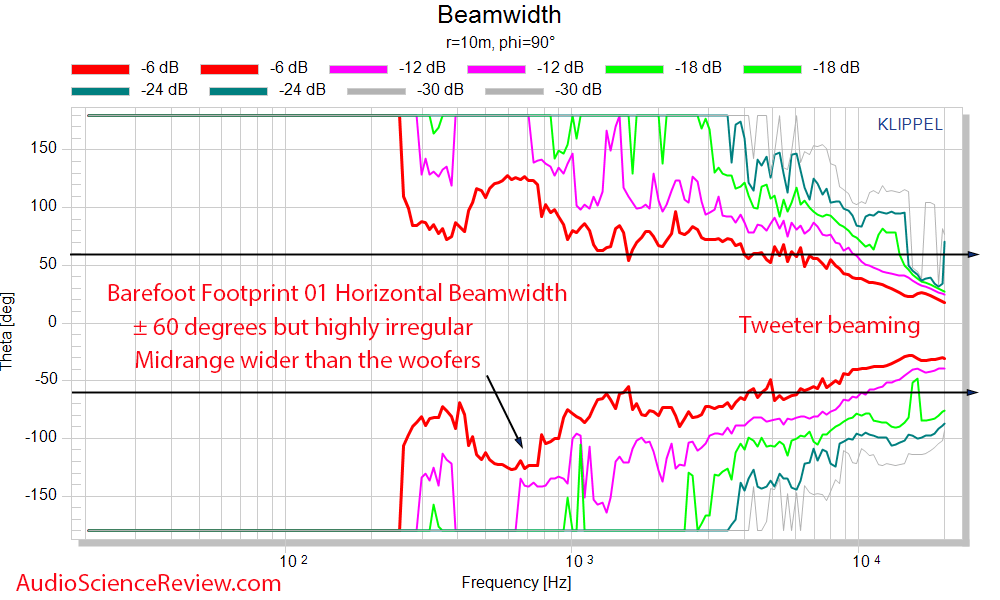 And of course the tweeter's beam width gets narrower with frequency in textbook manner: 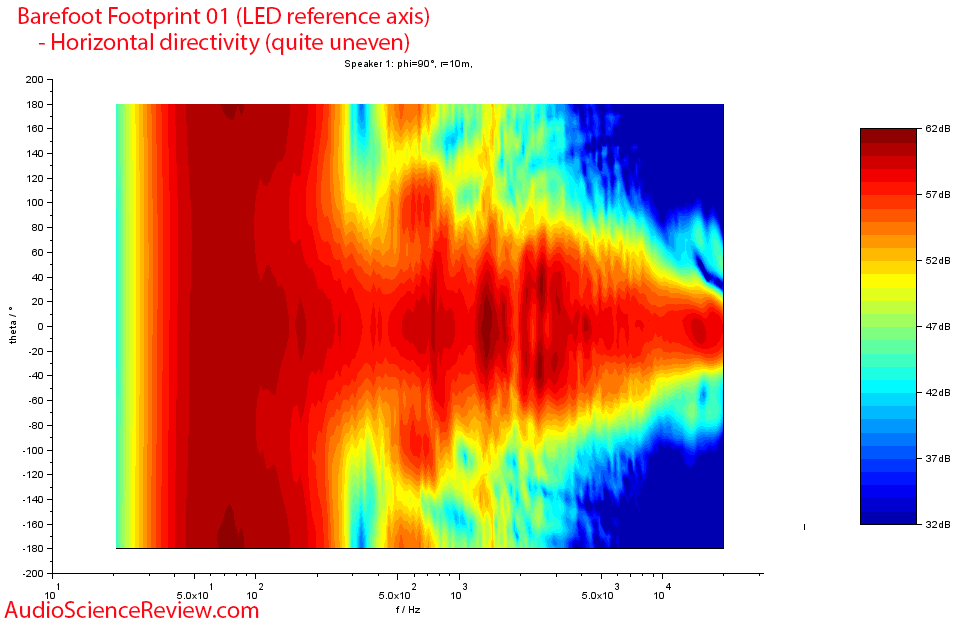 The vertical directivity is no better or worse than any other: 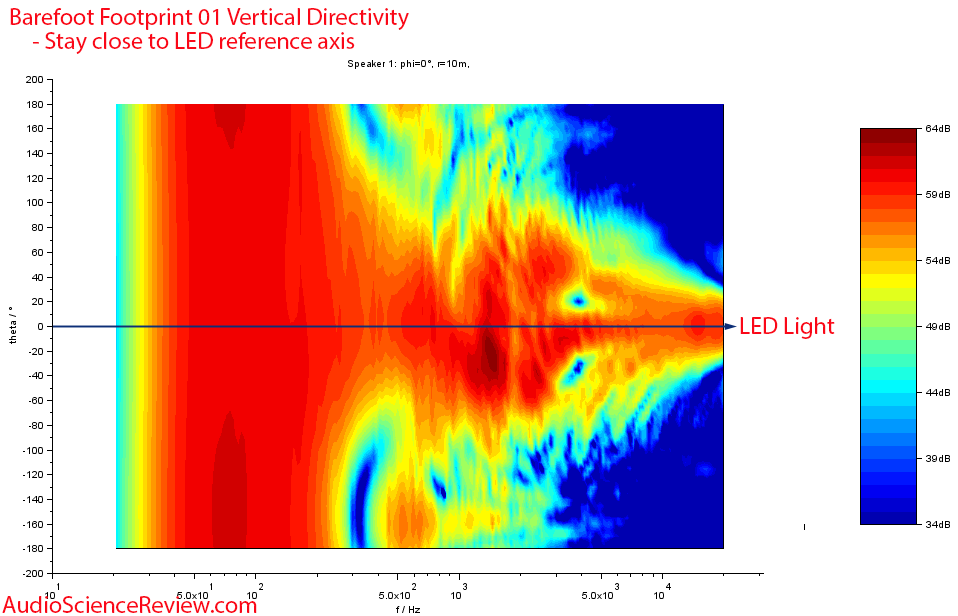 Near-field response of each driver shows a mid-range that doesn't have a flat response which a DSP could have fixed: 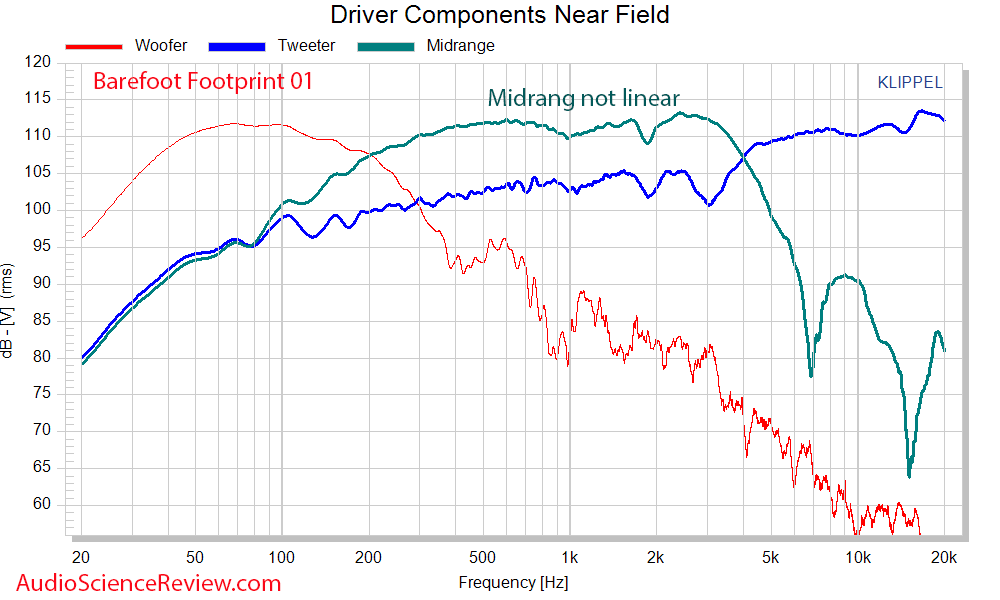 I was surprised bass distortion was not better than it is: 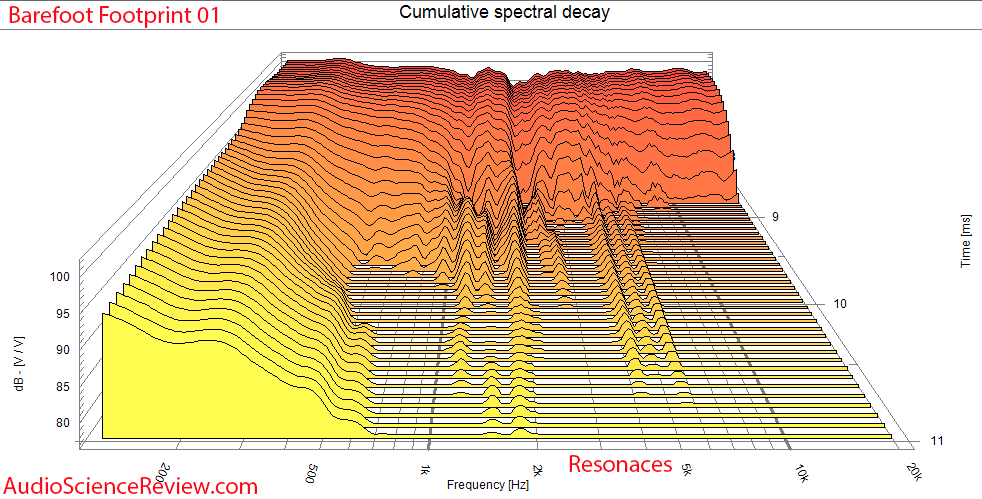 Barefoot Footprint 01 Listening Tests
I assumed the inclusion of the dual beefy woofers would make for a good far-field listening so I placed the Footprint 01 on my usual stand in my 2-channel listening setup and started to listen. I was mistaken. There was little that I liked about the sound. It was somewhat boomy and I did not like the sound in mid-range. I brought out EQ tools and corrected what I could but the end, I was not satisfied at all. I was also surprised that I could get the clipping light to come on before a level that I thought was too high. Fortunately it was not indicative of massive distortion so more loudness could be had.

A couple of times I heard some spatial effects that were unusual. Hard to describe but the background male vocals seemed to come from behind the front baffle. My guess is that it may be due to the side woofers playing these notes due to their high crossover point. I put my ear in front of the woofers though and could not confirm this. So take it for what it is as the saying goes.

I brought the speaker to my workstation area but it was too big to put on the side of my monitor. So I put it on top of my test instrument rack to my right. 5 seconds of playback showed remarkably good sound! Track after track was enjoyable to listen to with the EQ I had developed in the fair field: 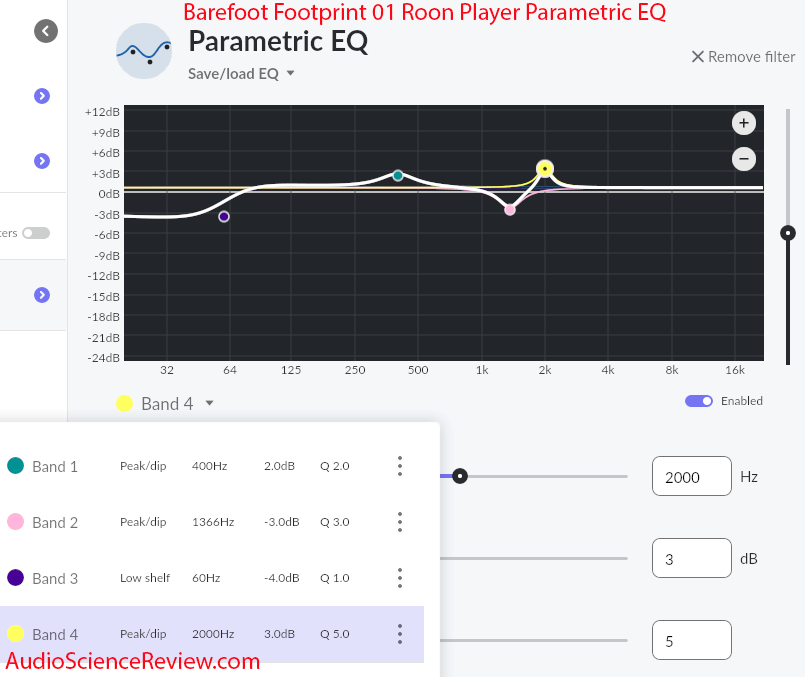 One big difference here was listening level so maybe distortion was playing a role. Another major difference is activation of room modes which would be wildly different in the new setup than old. And maybe he effect of the side-firing woofers was different.

Conclusions
The Barefoot Footprint 01 charts its own way with a studio monitor that is not architected the same as its competitors. Some of these departures are working in their favor, others are not. I suspect some of the flaws here is their improper measurement scheme that is not allowing them to see the flaws in the execution of this speaker. $1000 spent on an NFS measurement would do them wonders instead of using semi-DIY schemes as they seem to be deploying.

Anyway, near-field performance is very good with a bit of EQ. Far-field use is more questionable and likely requires proper in-room measurements to correct for all bass modes and lots of time spent on positioning due to poor directivity.

I am going to put the Barefoot Footprint 01 on my recommended list for near-field listening.

Any donations are much appreciated using: https://www.audiosciencereview.com/forum/index.php?threads/how-to-support-audio-science-review.8150

I own a pair of these as well - they are definitely intended for nearfield and not midfield or farfield. Barefoot markets them as such. 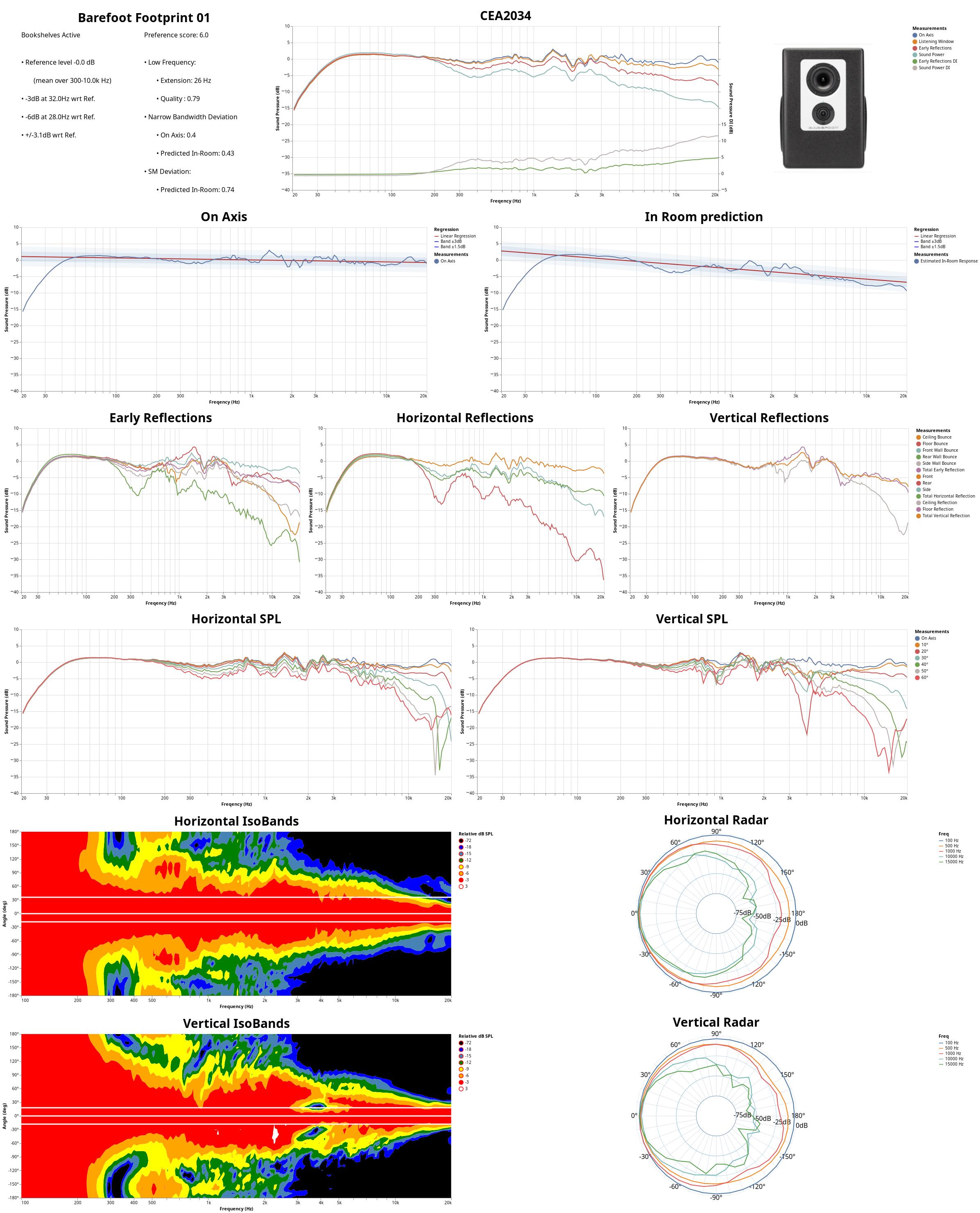 I was debating between these and the Genelec's. You've provided the information I needed!

Happy to be a donor!
T

bi-amped W/MT is the right tradeoff if you’re a speaker designer whose BOM did not include tri-amp.

Distortion is expected and average for the size of the small woofers crammed into a smaller box.

listening to these farfield- wrong speaker for the job…

In a weird way, Amir's measurements might be better than the manufacturer measurements when taking into account EQ. At least all the curves are moving up and down at the same time. With the manufacturer measurements, the off axis curves are still moving up and down, but on axis is staying flat, which EQ can't fix. With Amir's spin, I can envision.a pretty good speaker post EQ.
Blind Binaural shootout I (thewas)
Blind Binaural shootout II (ctrl)

As I had expected already from the manufacturers 0-30° measurements very mediocre directivity and in my opinion not worth a recommended panther at that price with such limitations (high distortion and rather only for nearfield and only with EQ).
Some comments from Floyd Toole about room curve targets, room EQ and more

Background vocals coming from behind the front baffle? Sounds like a cool Hi-Fi feature.

thewas said:
As I had expected already from the manufacturers 0-30° measurements very mediocre directivity and in my opinion not worth a recommended panther at that price with such limitations (high distortion and rather only for nearfield and only with EQ).
Click to expand...

Yep, especially when it's too large for placing on a desk.
Y

overall nice results but I did have better expections given their published measurements.. overall it's a bit of a loss to me in the C/P scheme of actives
P

GWolfman said:
I was debating between these and the Genelec's. You've provided the information I needed!

Which Genelec are you buying?

GWolfman said:
I was debating between these and the Genelec's.
Click to expand...


BranoO said:
Background vocals coming from behind the front baffle?
Click to expand...

It's the test I waited for for months: thank you very much!!!! I had some hopes, it could work in the midfield or farfield.... Well, at least your test saves me money. Or it won't, since Genelec 8351 seems now to be the speaker of choice *sigh*

Even the Genelec 8050B looks better than this, better directivity, better distortion. The Barefoot has a tiny smidge more extension but that's it as far as I can tell. And the KH310 is another similarly priced option if you want a comparable 3-way. 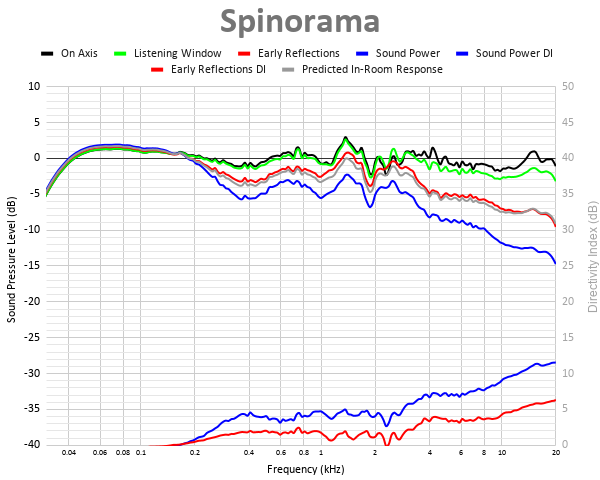 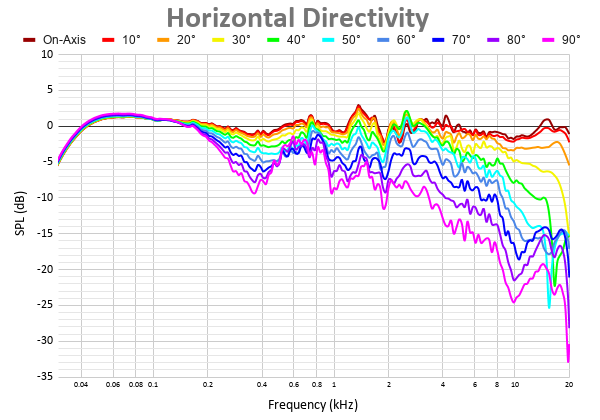 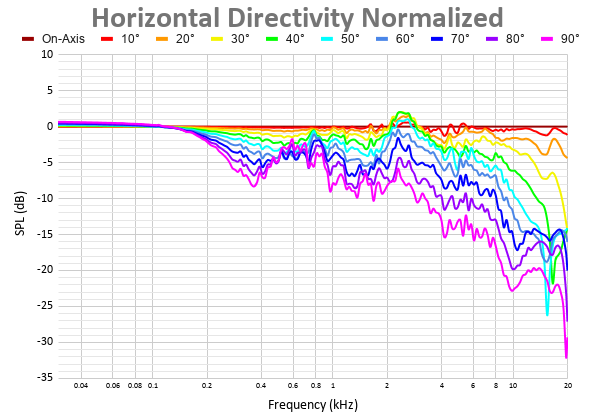 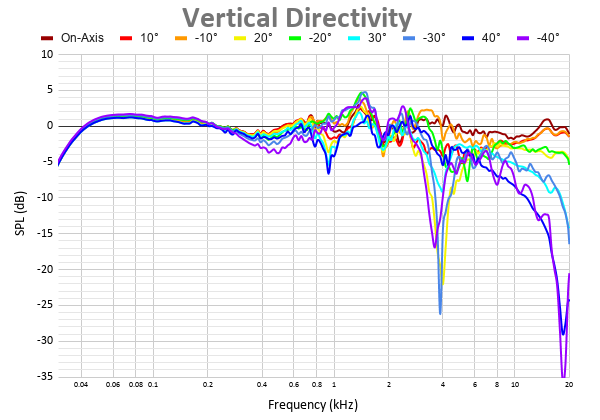 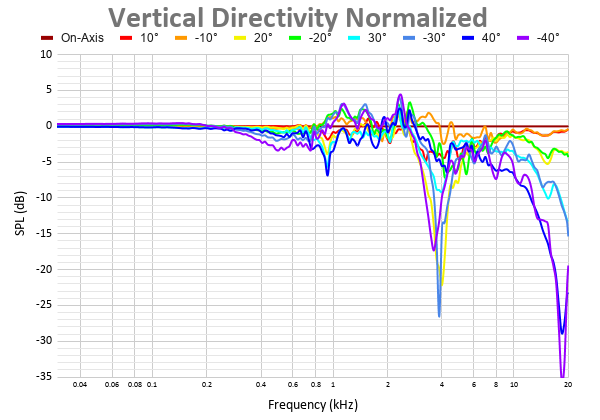 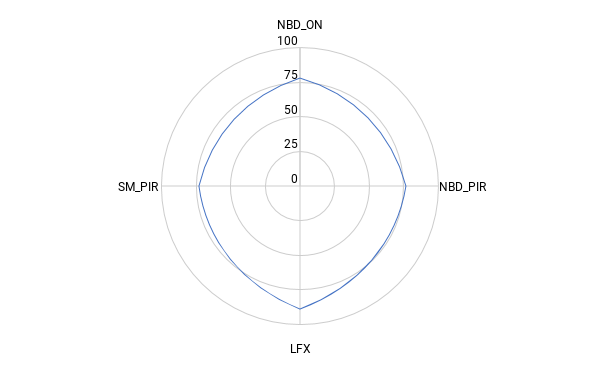 I did a bit of digging as I was curious about the drivers chosen. They all looked rather familiar. As far as I can see the drivers are basically:

These are all what you would call high value low cost drivers, and good choices. Each punches above its weight, but they are pretty cheap.
A mid/tweeter crossover of 3600Hz is pushing things.
The night is coming, and its filled with dark surprise.
B

These don't seem particularly appealing to anybody. There are just much better options out there.

dfuller said:
Thank you kindly. I'm guessing the distortion is from the choice of paper cones - which, to be honest, seemed like kind of an odd choice for a studio monitor. But eh.
Click to expand...

I'm guessing it's due to a combination of factors.
1. Closed box.
2. Small magnets on the woofers (cheap woofers).
3. Small internal space giving high Q and undersized magnets will have to push against the higher pressure inside.
4. Measurements say 86dB but since there's a bass boost it's actually 89dB or so in the bass.
5. It's distortion and SPL measurements may be relative to 1m from front baffle and the woofers are farther back so they may be playing even louder (not sure if this is indeed the case all measurements are relative to 1m from front baffle).
You must log in or register to reply here.