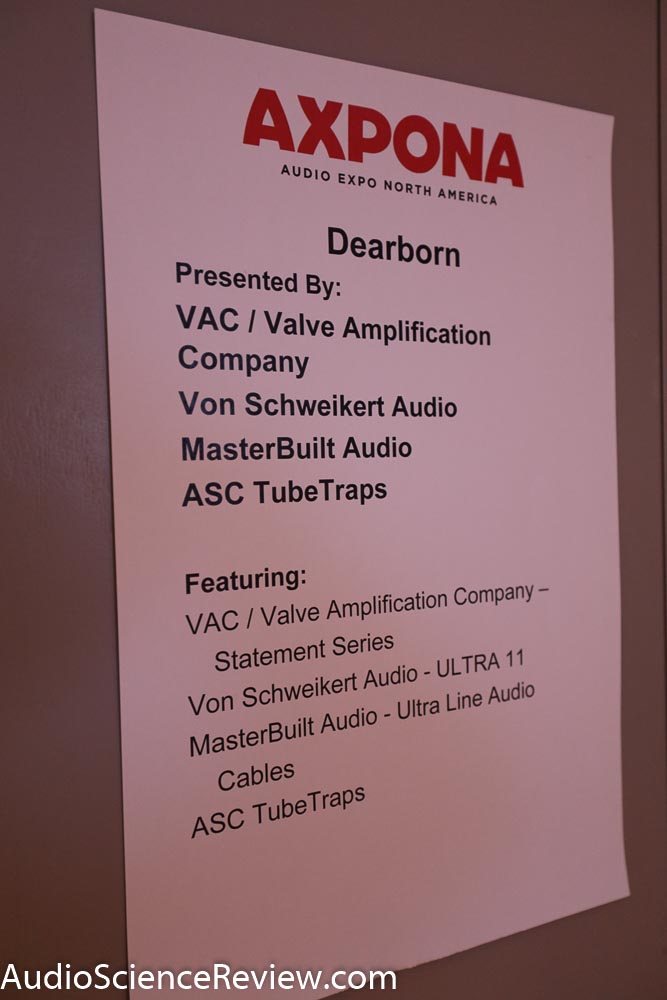 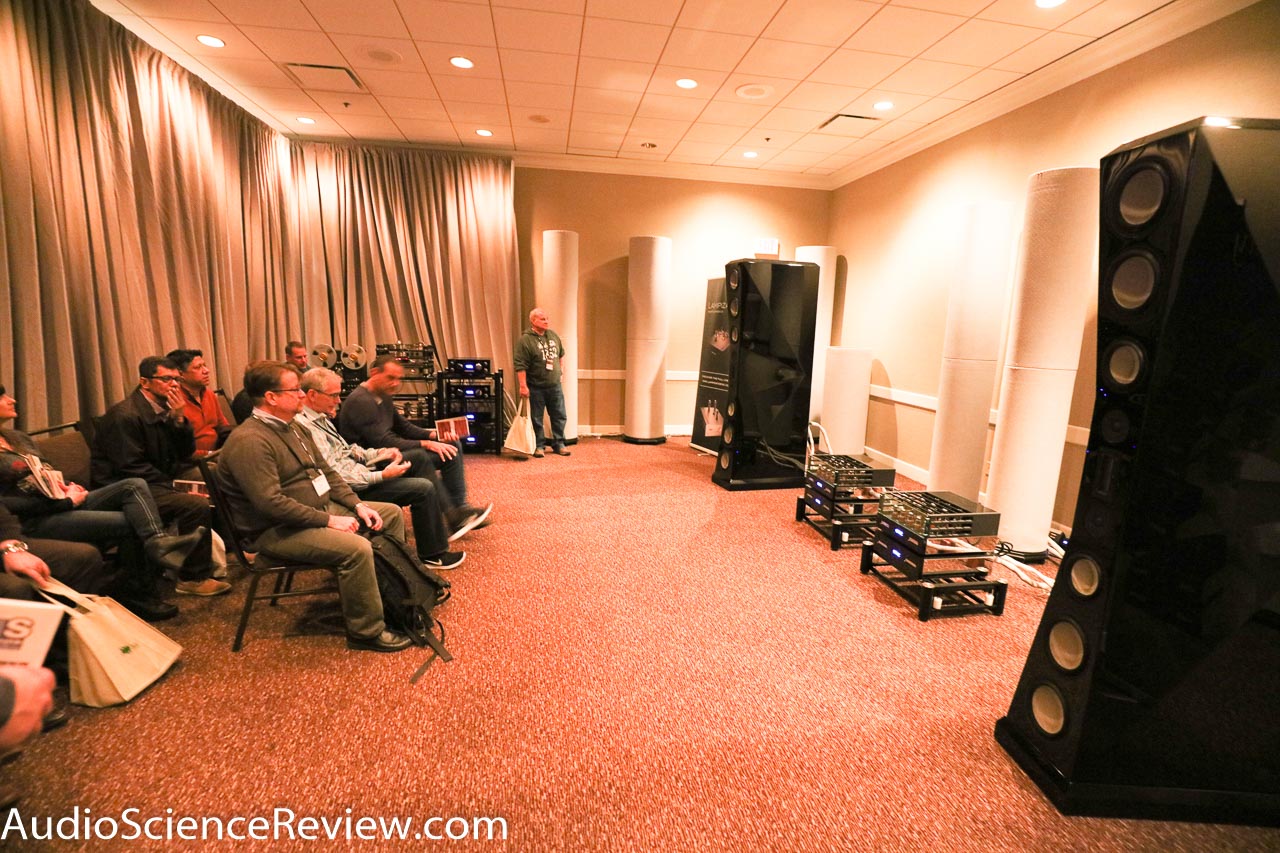 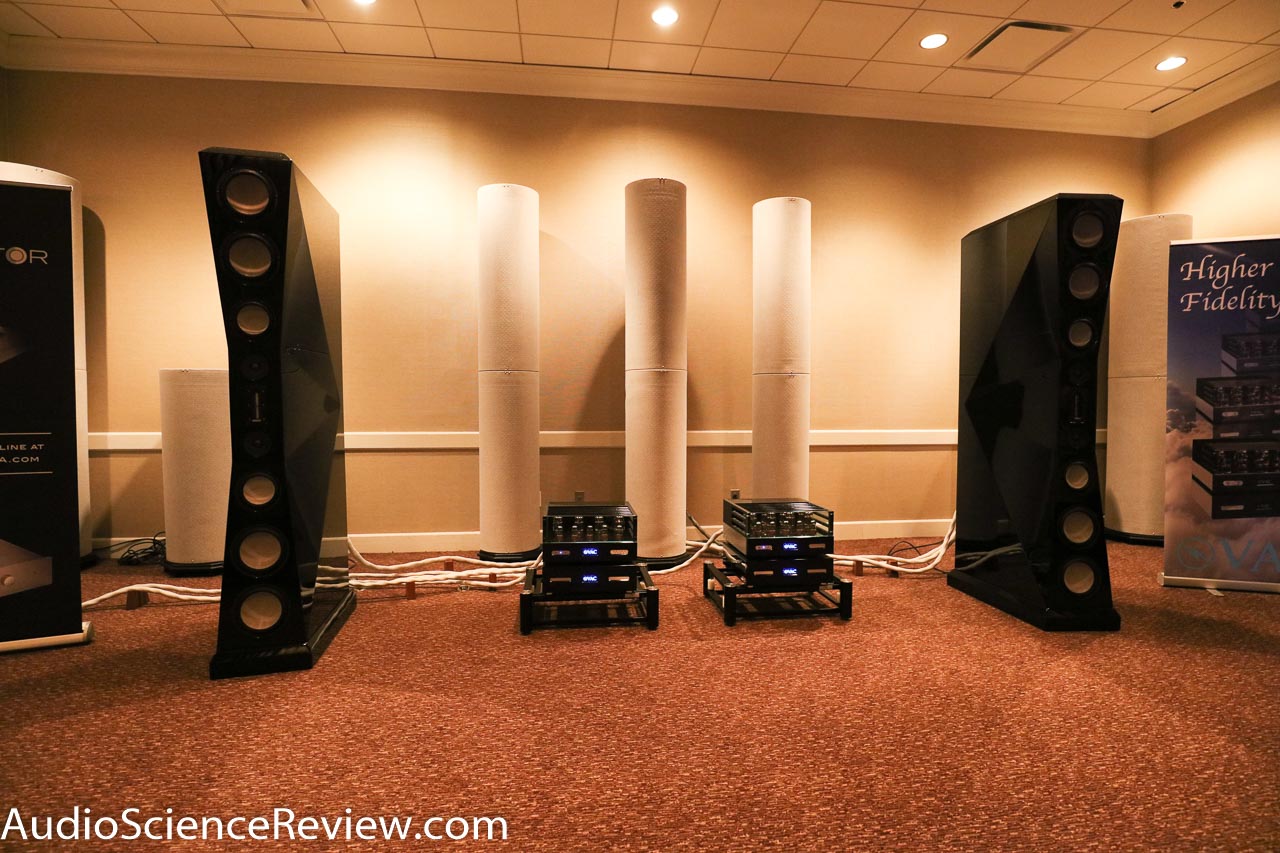 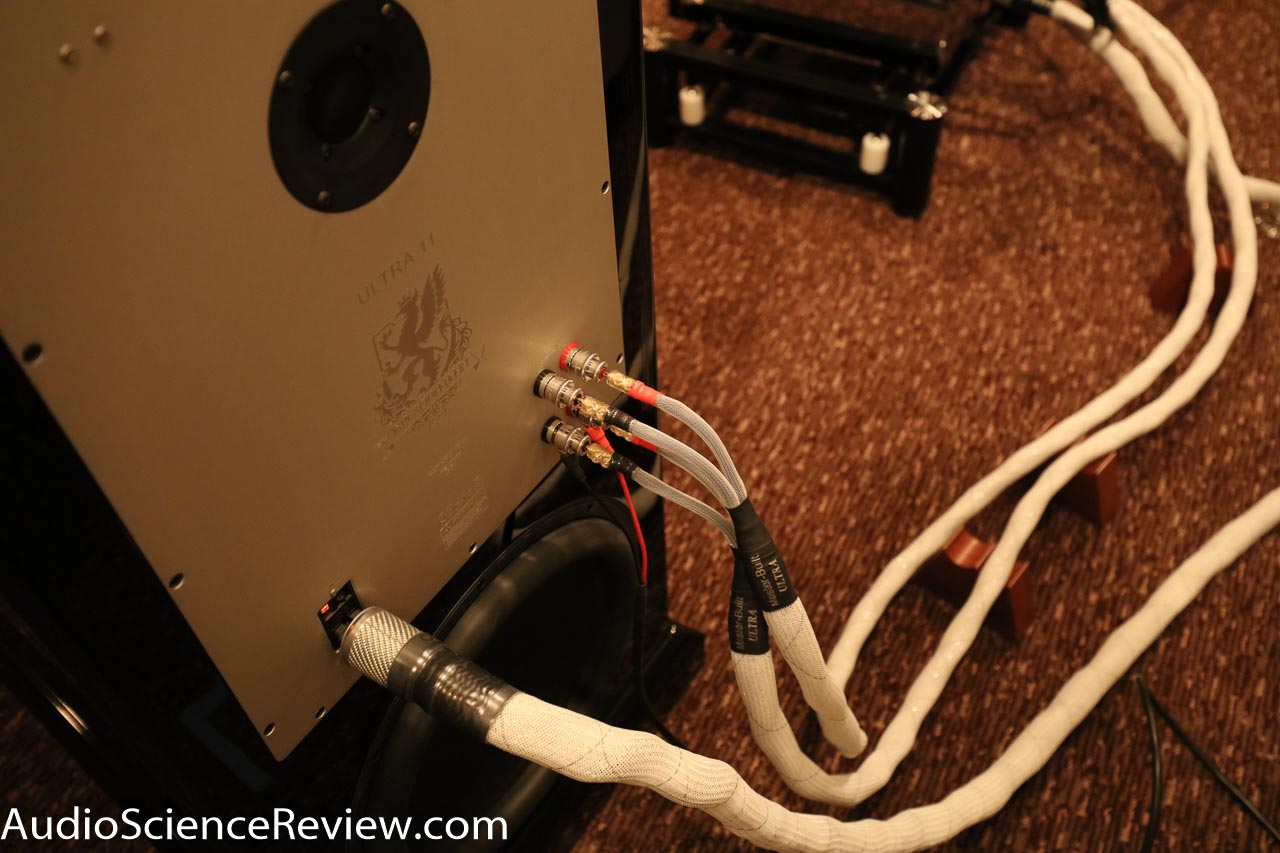 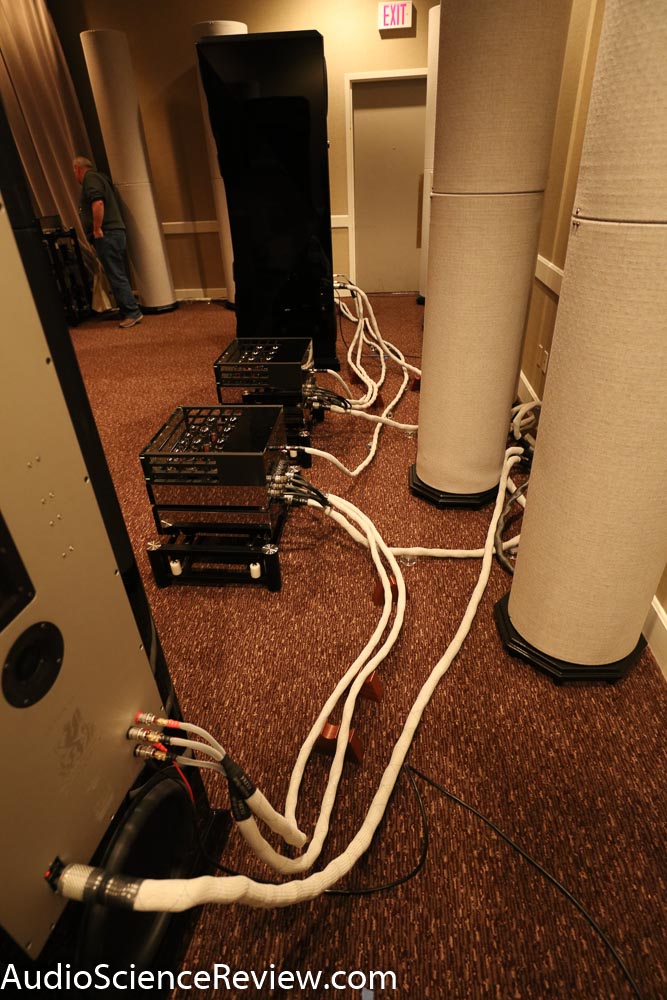 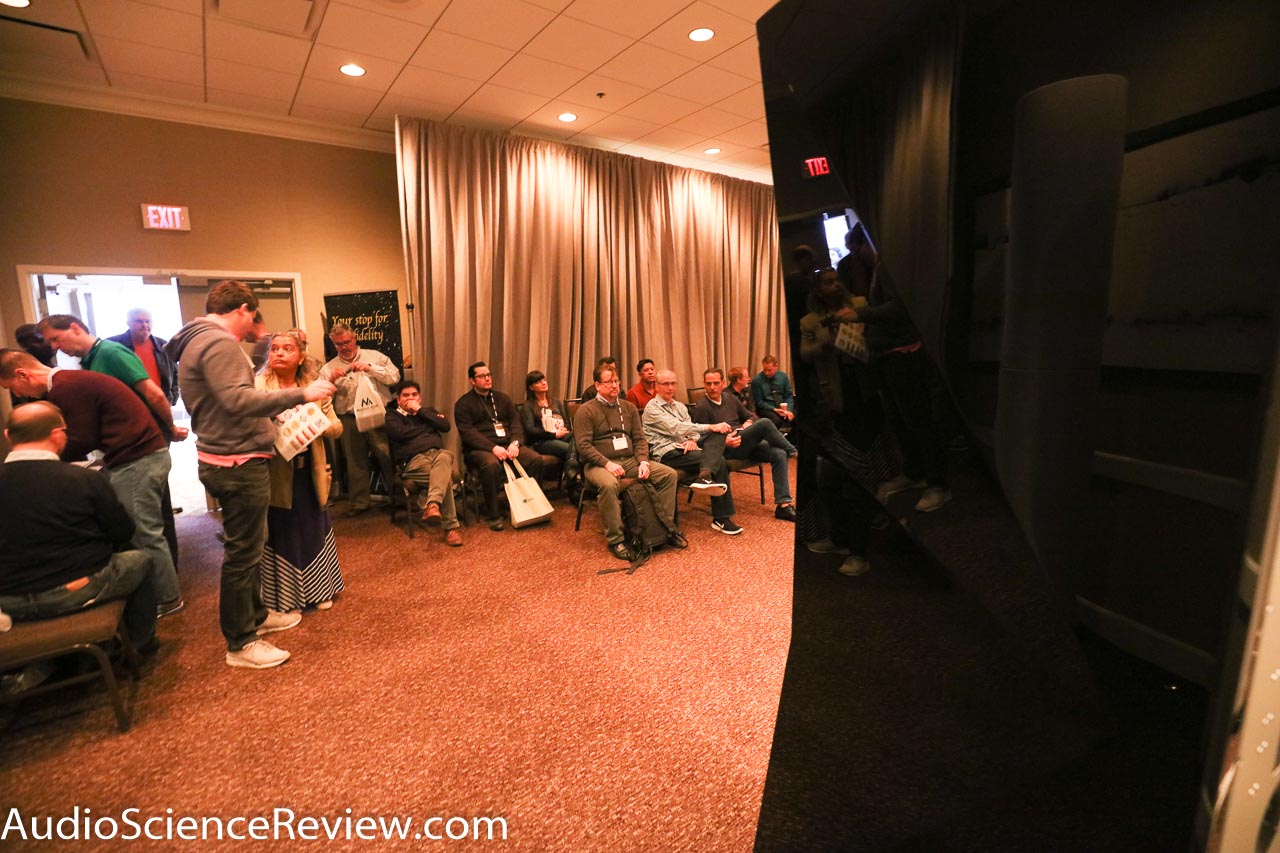 At this show VSA showed off their new Ultra 11 speakers. These are massive towers and a statement product. They retail for $290,000. Another item shown was the Masterbuilt Audio cables. These are ultra expensive audio cables. A 1 meter AC cable is $17,000 retail I think.

I am telling you this to give a notice as you read my comments. On WBF forum we had a lengthy debate on the merits of Masterbuilt cables. Their website talks about a lot of benefits for these cables including passing ABX blind tests! Testimonials that these cables make night and day difference unrivaled by other cables made even cable believers complain. The arguments got ugly, thread got closed multiple times, I was called names

Now, at a previous audio show, I had heard lower end VSA speakers and Masterbuilt cable and found them to sound superb. So I expected the same and more here. Alas, it was not meant to be and I tell you the above because I will surely be blamed for saying otherwise out of spite. Those of you who know me better, will know that I am an equal opportunity complainer so no bias gets in the way.
Amir
Founder, Audio Science Review
Founder, Madrona Digital
Contributing Editor, Widescreen Review Magazine
Click for My Technical Background
Master List of Audio Reviews
OP

So what is the problem? Room acoustics. Look at this shot:

This was a giant room. Probably 4 to 5 times larger than any of the normal hotel suites/rooms that others had. This helps a lot in lowering bass mode frequencies. Mistake here was to put the speakers widthwise. That forced the listening row to be way too close to these giant speakers. And they were too far apart to integrate as one system.

I tried sitting in the second row and as with all the other rooms, sans one, the sound was even worse there.

Mind you, these are dynamic speakers and they played them loud to show off. But even there, I thought they were too loud even for someone who likes it loud like me.

And what is the deal with the bass traps? They should go in corners, not between speakers. Yes, they kind of work there too but the problem is that in this room the ceiling is a commercial drop ceiling. That acts as an absorber. The floor is carpet so that is another absorber. Then back wall is a curtain so that is an absorber. Then adding these other tubes everywhere just adds to the feeling of a dead room (yes, Art says these are diffusers at higher frequencies but I am not sure).

If the room was rotated 90 degrees, and measurements made to find the modes and place the seats to avoid most of them, and farther away from speakers, it would have made a big difference. As it is, many rooms beat it in sound fidelity including Doshi room which played the identical tape sample they had, in a tiny room.
Amir
Founder, Audio Science Review
Founder, Madrona Digital
Contributing Editor, Widescreen Review Magazine
Click for My Technical Background
Master List of Audio Reviews
OP

I am glad I like this track as it sure got a lot of plays at the show!


This track brought out the issues with the speakers being too close to audience and two wide apart. You got the feeling that there was a left system, and a right system, with no integration between the two in the middle.

I sat in the sweet spot and it was the only spot that sounded half bad.. Huge thick muddy bass.. TEN feet tall vocals were not real ..
You must log in or register to reply here.
Share: Facebook Google+ Reddit Pinterest Tumblr WhatsApp Email Link