This is a review and detailed measurements of the ATI AT522NC Stereo power amplifier. It is on kind loan from a member. The 522NC costs US $2,195 but I see it on Amazon for US $1,995. The AT522NC is part of a series which starts with 2 channels of class D amplification and goes up to 4 channels in the same enclosure.

The industrial design of the AT522NC has some unique touches, some of which work, some that don't:

The part that detracts is ironically the ATI logo.

The power button has a very nice feel and gives one impression of quality.

Looking at the back, I was surprised by choice of input power connection:

It is a 20 amp IEC connection rather than the most common, 15 amp variety. This is partially due to use of linear power supply and massive/heavy toroidal transformer. But the most common reason is that the same setup is used in higher channel count amplification.

The amplifier is on a vertically mounted hypex NC-500 class D amplifiers with their own heatsinks. The "motherboard" has the power supply components. Overall, it seems like a very neat and logical design.

The speaker connections are of course very secure and high quality as can be expected in this price range. Great to see balanced XLR inputs which is how I tested the unit.

In use, there was barely a heat rise in the enclosure and the unit never shut down or complain even in the face of severe clipping. The large feet allow better convection cooling which is appreciated.

Amplifier Audio Measurements
As usual, we start with our dashboard of 1 kHz tone, at 5 watt into a 4 ohm load: 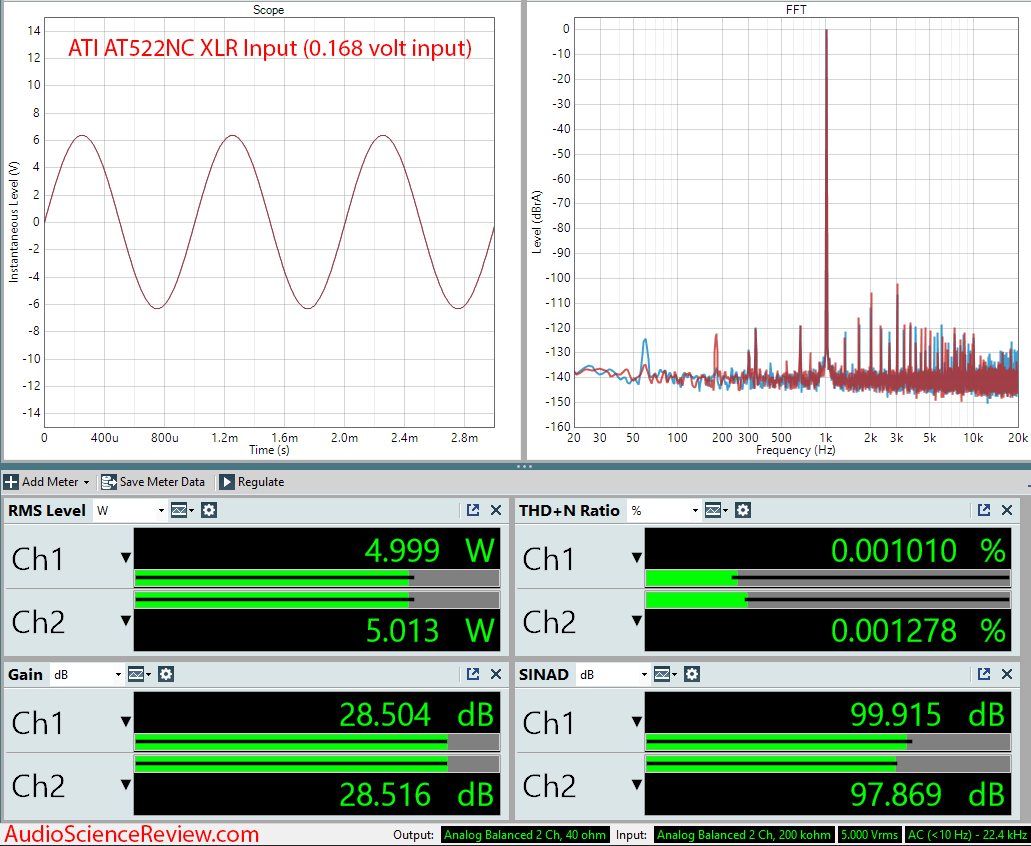 The use of linear power supply has its price in the form of power supply spurious tones (60, 18, 300 Hz, etc.). The dominant distortion peak is third harmonic at a bit less than 100 dB. Add some noise to it and SINAD (THD+N inverted) becomes around 98 dB. This places the ATI522NC well above average of all the amplifiers we have tested: 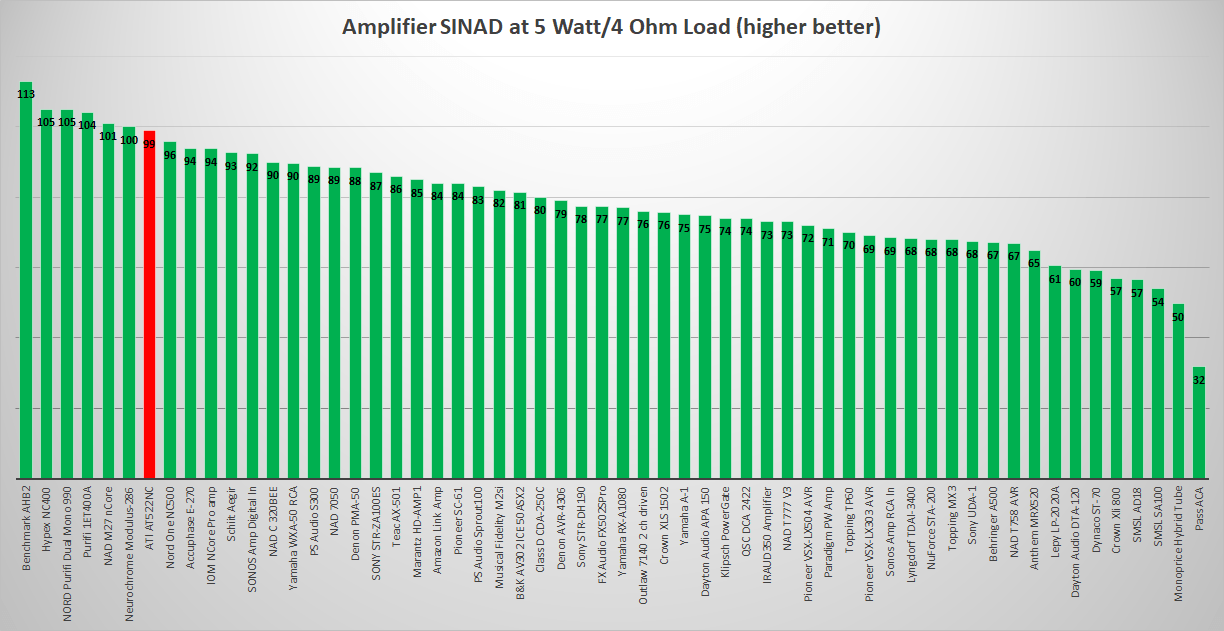 It sits just to the level of NC500 from Nord. Those of you who keep track of such things , I am sure will compare and contrast how it does relative to other Hypex based implementations.

Frequency response is orderly for a class D amplifier which needs an output filter to truncate switching frequency: 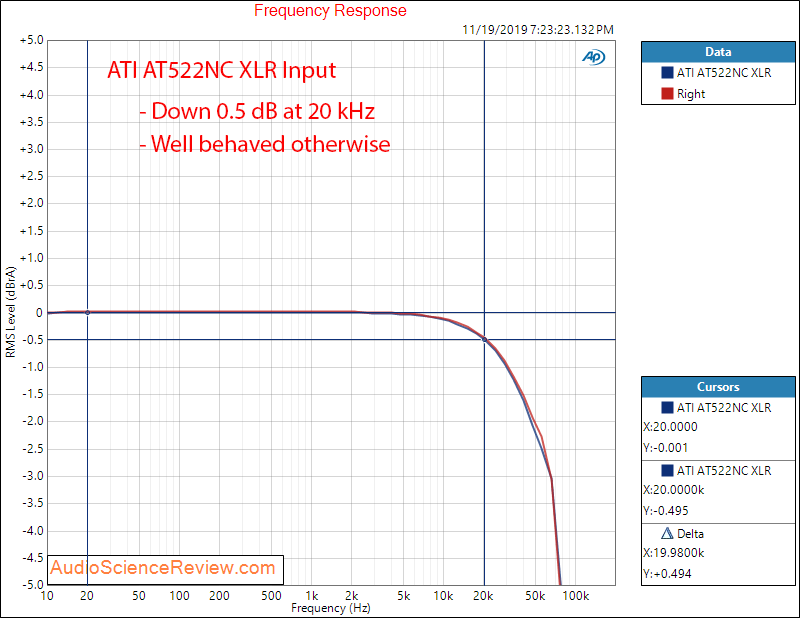 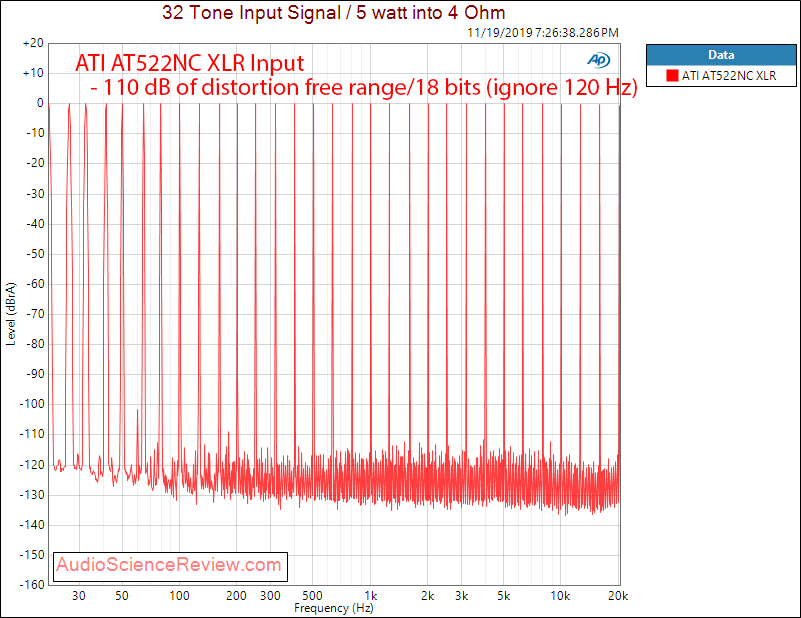 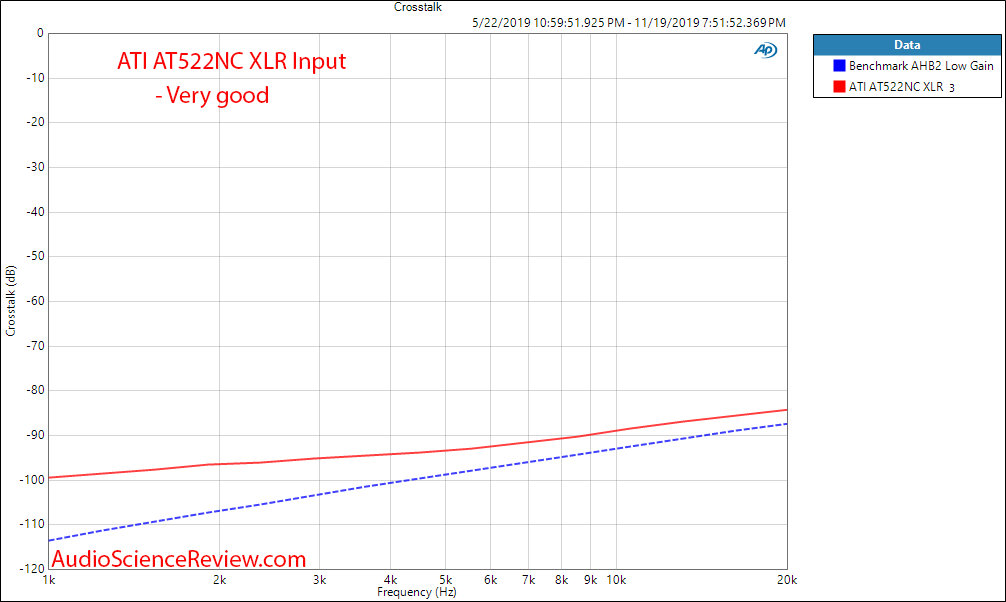 Most important data is power into 4 and 8 ohm versus distortion and noise. So let's start with 4 ohm: 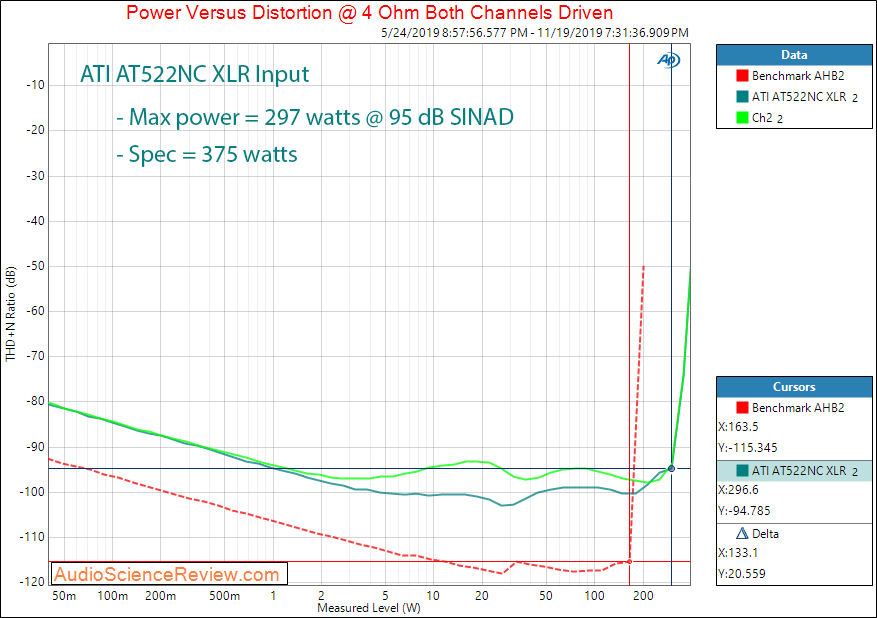 So not class leading but low distortion while providing 300 or so watts before sudden rise in distortion. Spec is higher but one can have more data points at the limit and gradually walk up the curve, and hence squeeze out a few more watts. I will show this later.

For 4 ohm load, here is the comparison to our state-of-the-art in class D amplification in the form of Purifi reference design: 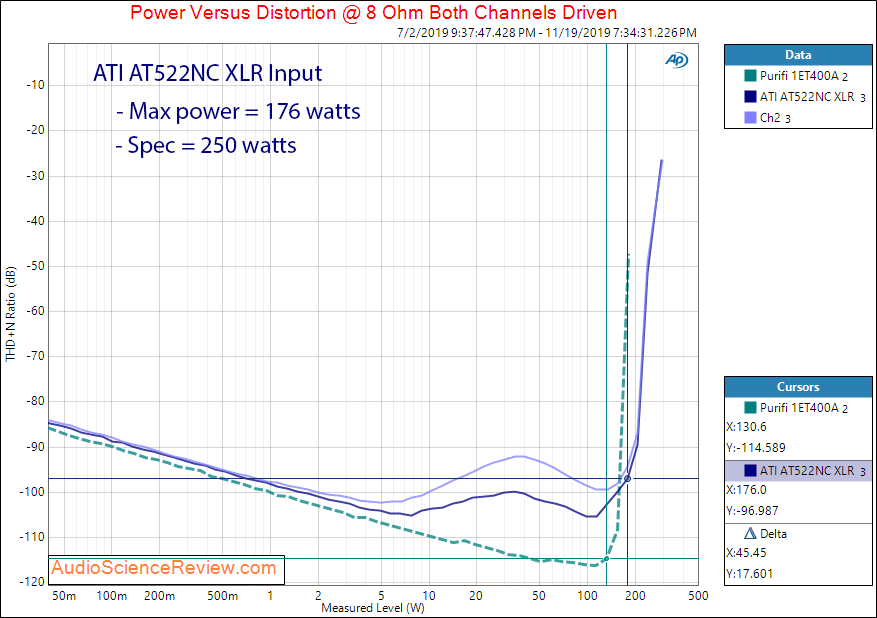 Purifi maintains the lead in distortion but produces a bit less power.

I was able to run my tough test of THD+N at 0.1% versus frequencies. Some amplifiers have died trying to run this test. Others are had to poinpoint as their distortion jumps all over the place: 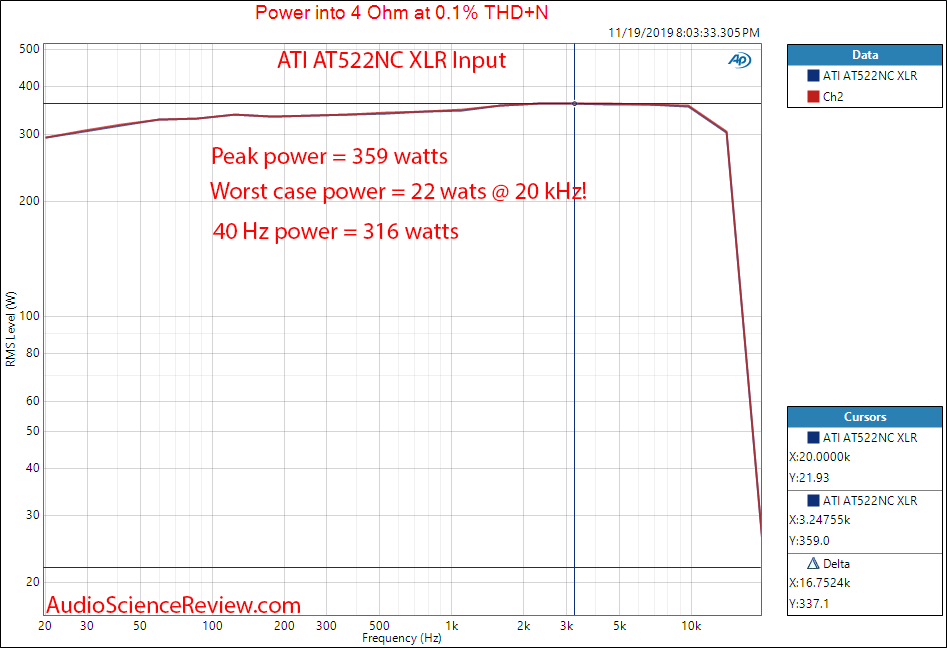 We see that at 1 kHz we normally measure, power is almost near max. Above that we reach nearly 360 watts. At 20 kHz though, distortion shoots way up and we are able to only produce 22 watts before THD+N of 0.1% is hit. Fortunately there is not much music energy there so practical audible concern is low.

I made a survey of a few of the tracks in my music library. Peak energy seems to hover around 40 Hz. For that reason, I have started to measure amount of power at 40 Hz and here, we have 316 watts which is good.

Finishing off, switching frequency is around 400 kHz: 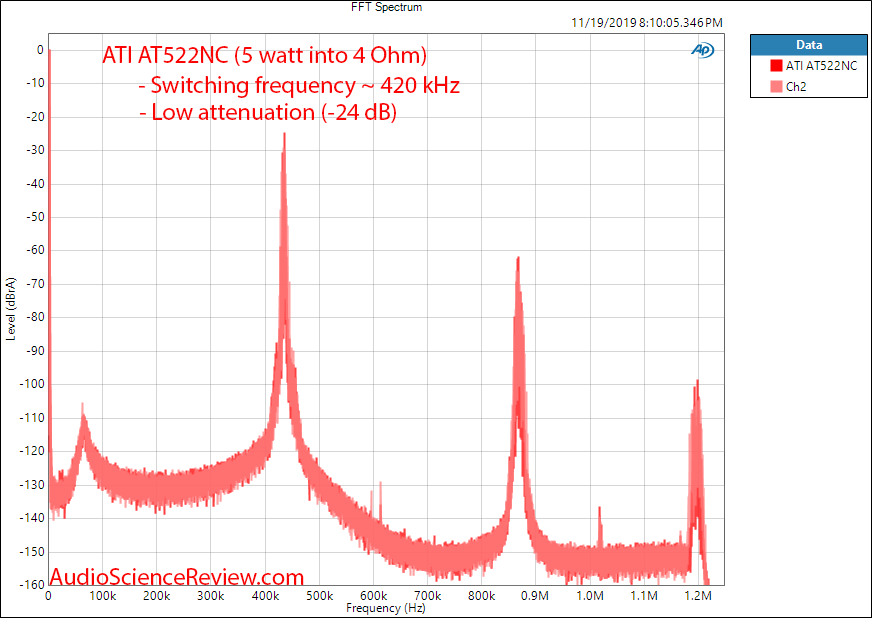 The noise doesn't scale with power though. Plotting the same at max power with source frequency of 40 Hz gives us this: 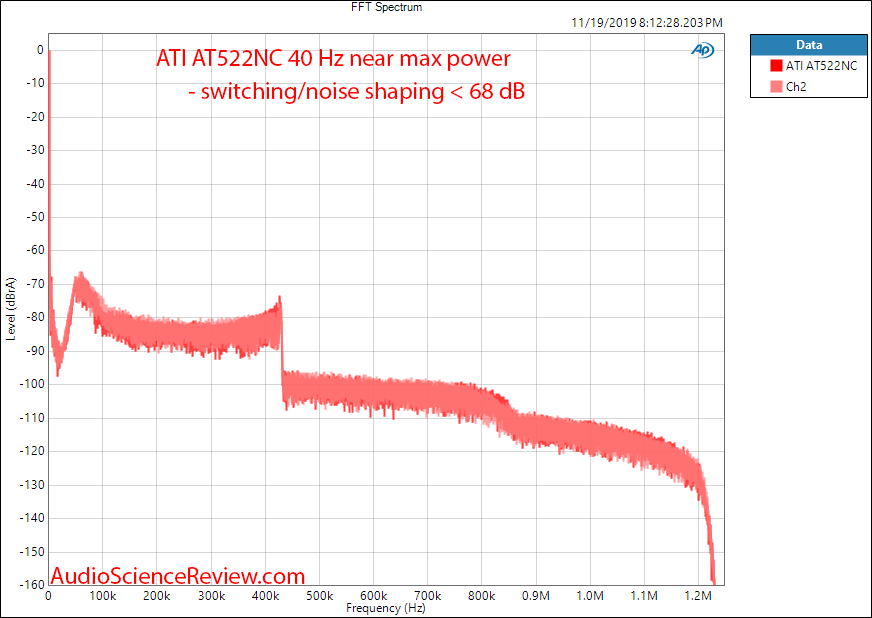 And intermodulation distortion using 19+20 kHz at 5 watts output into 4 ohm: 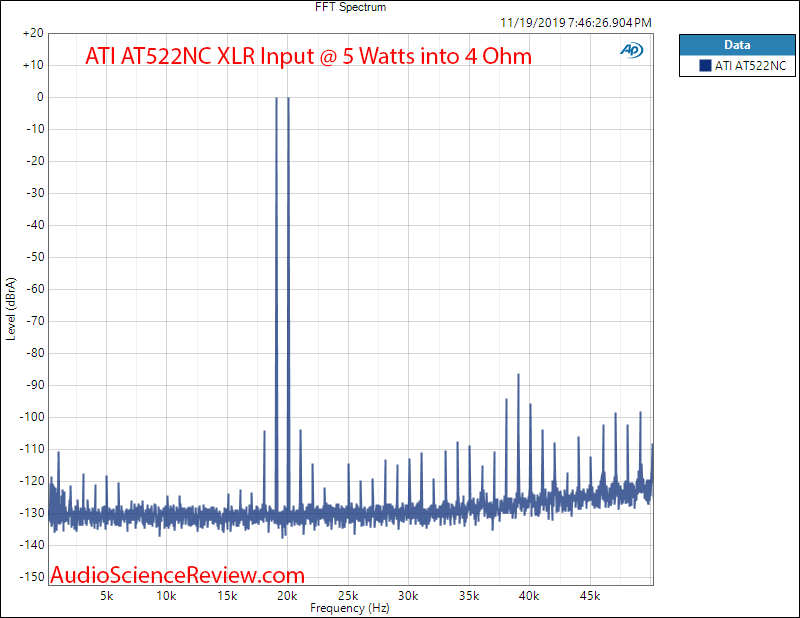 Conclusions
The ATI AT522NC seems like a solidly built amplifier based on Hypex NC500 modules. ATI builds amplifiers for many other companies and this competence shows up in this review. Performance is of course limited by what the NC500 module can do. Use of linear power supply defeats the size and weight advantages of common class D amplifiers. It may provide better peak power rating -- something I wanted to test but forgot.

Overall, I can recommend the ATI AT522NC stereo amplifier.

Watching important news on TV as I type this so no positive energy to think of a lame joke. Please donate if you can using: https://www.audiosciencereview.com/forum/index.php?threads/how-to-support-audio-science-review.8150/
Last edited: Nov 20, 2019
Amir
Founder, Audio Science Review
Founder, Madrona Digital
Review Thread Rules
My Technical Background
My YouTube Channel

Could you do that peak power test?
OP 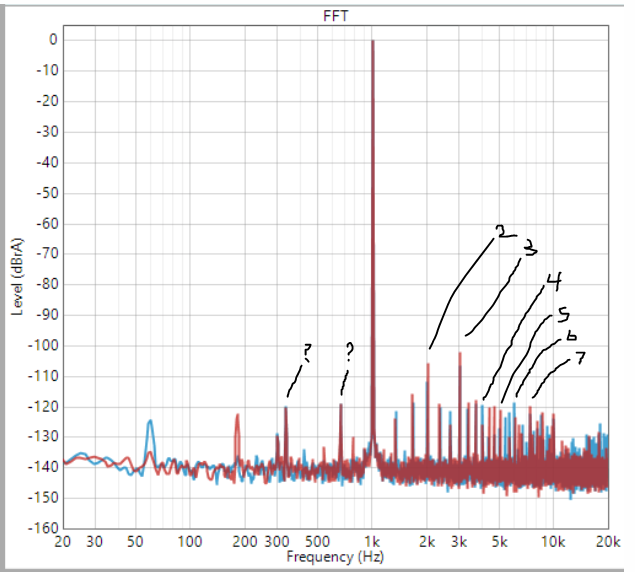 Maybe not specific to this amp, but...

They are low enough, but where are they coming from? Is it a Class D thing? 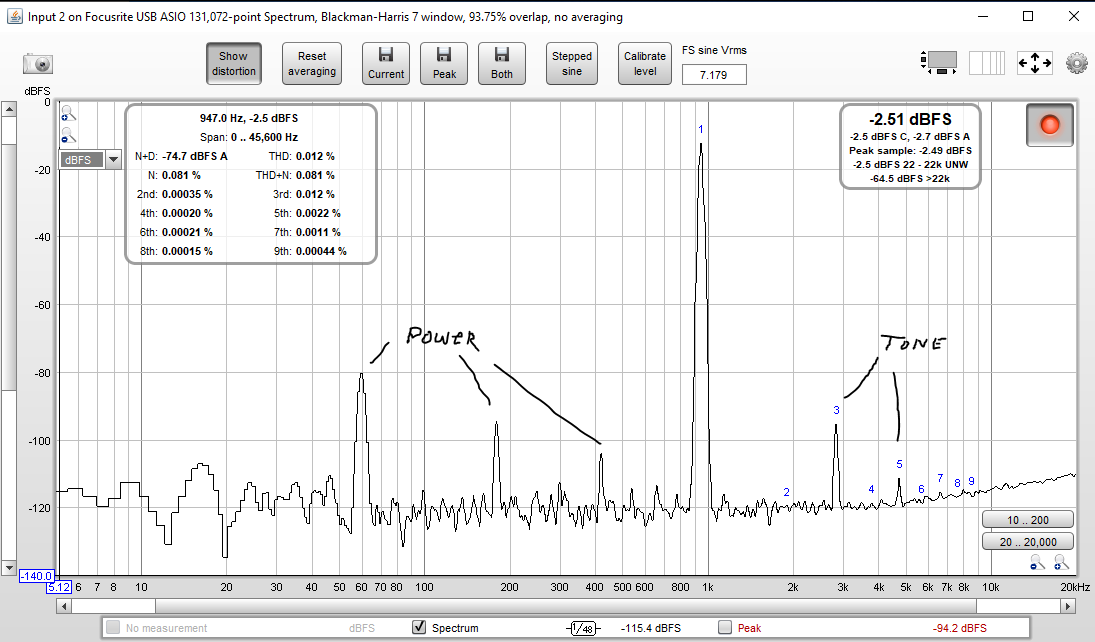 RayDunzl said:
Maybe not specific to this amp, but...

They are low enough, but where are they coming from? Is it a Class D thing?
Click to expand... 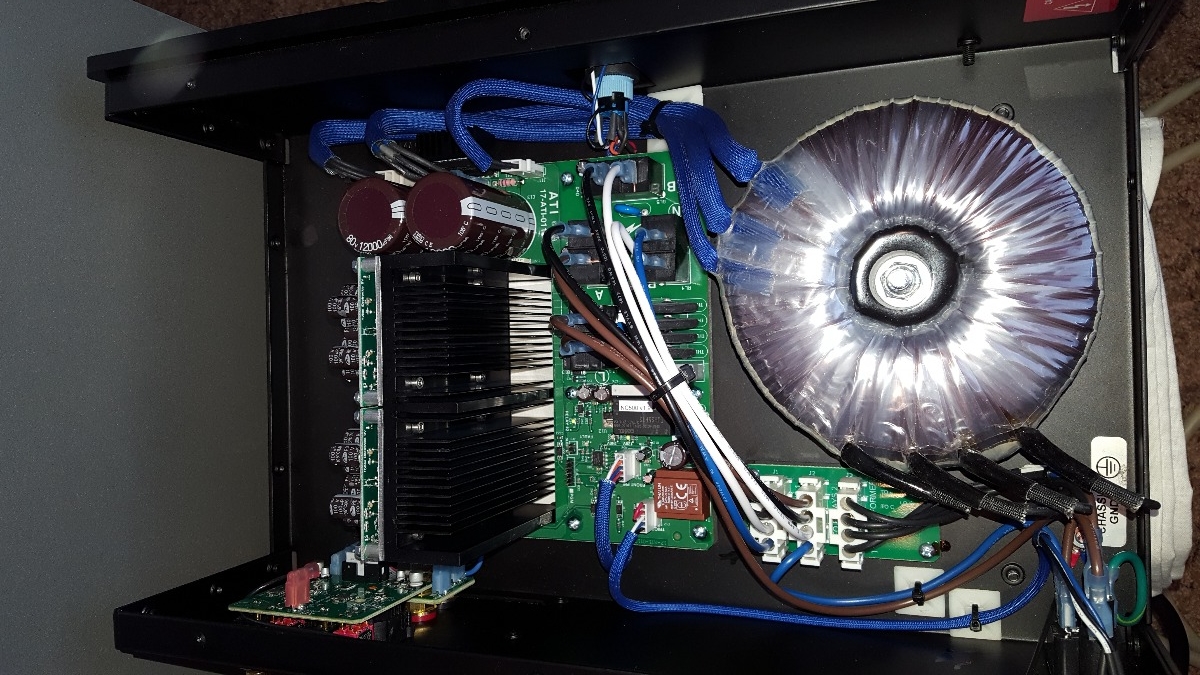 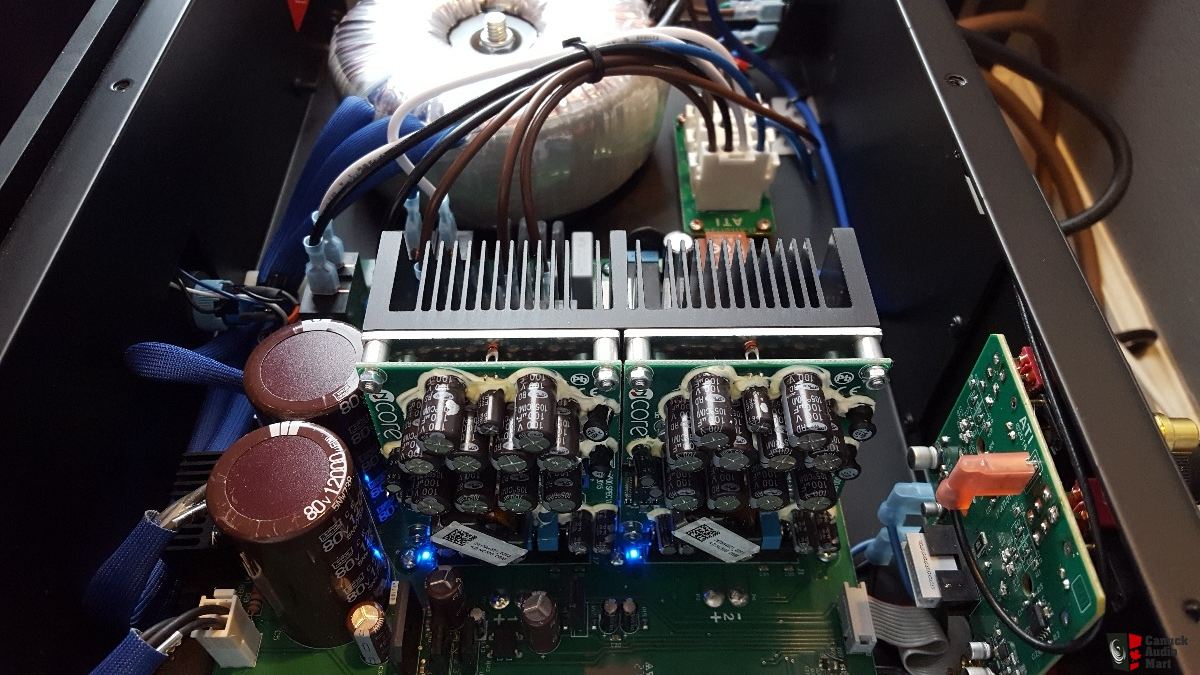 FAST said:
How many AMPs of current does this unit provide??
Click to expand...

amirm said:
Just divide the power by the load in the graphs and take the square root of it. P = I*I/R.
Click to expand...

What happens in the audible range if you feed it a 420khz signal at various power levels?
D

audimus said:
What happens in the audible range if you feed it a 420khz signal at various power levels?
Click to expand...

You can go on the air with your own radio station???

Actually, I'm sure you know the answer to your question. This "design oversight" was extensively discussed over on DIYaudio a few years ago.

audimus said:
What happens in the audible range if you feed it a 420khz signal at various power levels?
Click to expand...

Highest frequency I can generate with APx555 is 204 kHz. To go up to 420 kHz I have to use my dedicated function generator which doesn't remotely have the same quality.
Amir
Founder, Audio Science Review
Founder, Madrona Digital
Review Thread Rules
My Technical Background
My YouTube Channel

Use of a linear power supply has been known to cause back problems. Great and highly relevant review.
I've got soul, but I'm not a soldier...
G

I know some of the hypex with their switching supplies were only able to sustain their "RMS" figures for very short periods of time and the true figure of continuous output is closer to 40 watts even though they are able to provide short busts for much higher output. Since this one has a torroid can it sustain its power output much longer than the ones with switching before shutting down?

Amir, you're defining the state of the art when it comes to measuring and reviewing Class D amps. I especially appreciated the FFT of full spectrum noise relative to a 40Hz signal. It puts things into perspective, and I've never seen a similar graph published before. Nicely done.
OP

garbulky said:
Since this one has a torroid can it sustain its power output much longer than the ones with switching before shutting down?
Click to expand...

The power sweep vs frequency took a while and it did not cause a problem. AVRs for example routinely shut down during that testing.

The Nord NC500 is a bit higher THD, but if you only need 2ch, it’s more powerful and a good deal cheaper.
Loudspeaker Data & Preference Ratings
A

blueone said:
Amir, you're defining the state of the art when it comes to measuring and reviewing Class D amps. I especially appreciated the FFT of full spectrum noise relative to a 40Hz signal. It puts things into perspective, and I've never seen a similar graph published before. Nicely done.
Click to expand...

I have been listening to the testimony in DC, and the above reminded me of what they always say when a witness is confirming their position.

Ok, I’ll bite. What is the significance of a full spectrum to 1mhz sweep with a 40hz signal? Why 40hz and what perspective does this provide? I truly don’t know and I would guess most here don’t. I yield the floor to you...
A

Is it possible to verify if it has a RF filter on inputs as good practice for amps, in particular for designs that may be affected by it?
K

"What is the significance of a full spectrum to 1mhz sweep with a 40hz signal? Why 40hz and what perspective does this provide? " Amir explained his justification of the 40Hz frequency. Perhaps having an idea about signal strength of unwanted (inaudible) signals being sent out onto IO connectors can give you a sense of how easily this piece might be integrated with another piece of gear with susceptibility in that frequency range. For example you might argue it will be difficult to efficiently radiate 20K off a speaker wire. As you start talking frequencies approaching a Meg or more, that is a significantly different story. Without the broadband scan you don't know whatis there or not. Personally I like seeing that info. I just wish there was also an accompanying immunity result, of some sort, to go with it. Obviously this broadband test is not the perfect complete characterization of all things, even raising new questions, but I'd argue this info quite a bit better than no info at all. I hope Amir keeps fine tuning these sorts of tests, personally.
You must log in or register to reply here.