I was able to hear some hum noise...a mixture between 50Hz and 150Hz, especially when using my sensitive AKG K550 cans with volume to the max, of course...no input source connected! I know these sensitive 32-Ohms cans can be driven by only few dozen of mV only instead of 7V when volume to the max, but I know this DAC/headamp combo measured some hum by Archimago (here and here) and also by other people's RMAA, so I needed a way to test it myself without having a decent ADC around. So yes, the hum is there and audible.

If I was reclining or moving away the toroid trafo then hum was gone, actually...if I was opening the case the hum os not there anymore, so most likely the thick metallic case bounced back the EMI field into the nearby potentiometer or something. So yes: case open = no more hum; case closed and toroid in a different angle = hum lowered a lot...quite strange.

However, I fixed the hum noise for good by wrapping twice a band of "grain-oriented silicon steel" (G.O.S.S. band) around the toroidal transformer. Now there's absolutely no audible hum at all not with AKG K550 anymore and not even with my very sensitive 16-Ohms Superlux IEMs (quiet night, mute=ON, pot. to the max. = no hum at all!).

The G.O.S.S. band I got it from a friend who works as engineer for Petra-toroid (I got it for free, they don't sell this). Also Talema is implementing this as well in Hi-Fi equipment: http://www.nuvotem.com/en/products/gossband_large.shtml. So yes Sir, Faraday knew some shit.

BTW, I have noticed that with my 300 ohm headphones, the leads pick up fair amount of measurable noise! Impedance is high enough as to allow that. Don't see that with < 100 ohm headphones.
Amir
Founder, Audio Science Review
Founder, Madrona Digital
Contributing Editor, Widescreen Review Magazine
Click for My Technical Background
Master List of Audio Reviews
OP

L.E.: Hope you do notice the metallic band strapped around the toroid that helps in lowering the 50Hz hum to inaudible.
Last edited: Apr 15, 2018
OP

Here's a very "not so nice" ground loop between the -12V power rail of the PSU and the PCB itself and how this looks on a Tek and on a Pico:

Here're 2 ways to resolve this (directly on the plug or soldering on the backside of PCB):

L.E.: A simple wire that connects the -12V ground to the PCB main ground resolves this. I wonder how could ASUS missed a ground connection inside the wires between the PSU and the PCB.

Also, here's how -12V looks like at the PSU side and not to the PCB side:

Speaking about the poor grounding and ground loops, here's the +12V:

And here's after resolving some grounding issues on the PSU's PCB:

Issues I was speaking about:

The main issue was with the +5V rail, because this DAC/headamp combo device was using only 1 x 5V power source for everything: relayes, the ARM chip inside, the DSP chip and for both PCM1795 DAC. Quite lame, isn't it? And some PCB traces were having somewhere around 30cm length, especially the ones from the PSU till the PCM1795's analog Vref supply pins.

- after replacing 2940 regulator with a NJM7805 it looks a bit better, but still nasty

- changing the regulator with a LT1963A

- although, measured on the Vref pins of both PCM1795 DACs I don't like the noise (thanks to the high-length PCB traces and the ARM chip nearby)

- decided to cut the +5V traces in the proximity of the two PCM1795 chips and to create a new +5V dedicated PSU to both DAC chips (I choose a NJM7805 having a max. of 40uV of noise) powered from the same transformer, just in front of existing +5V (before the existing +5V regulator)

- now I can sleep well, as this is what I measured at the Vref pins of the DAC chips.

Below is the cable coming from the DIY 2'nd +5V PSU:

Despite of the dual PCM1795 DACs and good components around them, the lack of correct grounding techniques, ground-loops, poor PCB with very long power traces were causing the device to not measure very well (though Stereophile gave it around 19 bits or resolution) and to sound a bit grainy. Now, after all of the above mods, the Essence One DAC/amp sounds very well to my ears.

P.S.: A second identical combo DAC was measured and I got about the same measurement results with same Tektronic scope, so it was not an issue with my combo DAC only, it was probably a general issue.
Last edited: Apr 16, 2018
OP

If the above mods did really improved the output sound, now some easier mods that might or might not improve the sound:

- paralleling the existing polarised Nichicon caps on the bottom of PCB with non-polarised WIMA's (couldn't notice any sound improvement on XLR/RCA outputs).

- 10-Ohms output resistors added by ASUS but not recommended by TI on the LME49860 datasheet. With 30-Ohms resistive load I was able to measure about 11-Ohms output impedance. I can't listen very well to 16-Ohms IEMs nor to 50-Ohms planar Fostex T50RP-mk3 because lower bass is somehow loosing...not thick enough and losing the intensity. However, with my other cans sound is perfect (AKG K701, Beyers DT880 600-Ohms etc.)

- paralleling additional 10-Ohms resistors on existing 10-Ohms resistors from the PCB (thought I can just short-circuit these resistors anyway) lowered the amplifier's output impedance (when 1kHz signal applied and 30-Ohms resistive load is used) down to 2.9-Ohms. 16-Ohms IEM's and Fostex planars sound perfect now...couldn't believe what I was hearing and I was also doing A/B'ing with an external amp, so it's not my imagination.

With 15-Ohms load resistor sine waves look perfect and having the same amplitude across audio spectrum, so the response would be perfectly flat.

Forgot to say that in I/V stage the 4xMUSES01 add some more details and warm in the sound that makes it more pleasant.
I'm also running 2xMUSES02 in the LowPassFilter, but I'm unable to differentiate these opamps out of MUSES8820 for example.

- I've also added a common-mode EMI filter on the 230V mains cables and a bit of ground decoupling with a cap and a 5-Ohms/2W resistor (I've seen this decoupling technique inside Meier Corda's Jazz, I think). This will be decreasing the hum in case of a ground-loop created with the XLR/RCA interconnects and an external amplifier.
Last edited: Apr 16, 2018
OP

BTW, I have noticed that with my 300 ohm headphones, the leads pick up fair amount of measurable noise! Impedance is high enough as to allow that. Don't see that with < 100 ohm headphones.
Click to expand...
If cables are long enough then I believe it's noise captured from the headphones cable, right? It's probably outside audible range, right?
OP

BTW, I have noticed that with my 300 ohm headphones, the leads pick up fair amount of measurable noise! Impedance is high enough as to allow that. Don't see that with < 100 ohm headphones.
Click to expand...
John Atkinson tested this DAC with 50 Hz waves and seems that 2nd harmonic (100 Hz) is higher when using 300 Ohms cans instead of 600 Ohms: graphs 13. & 14 from https://www.stereophile.com/content...-processor150headphone-amplifier-measurements.

Well, I admire your tenacity in trying to re-engineer what was clearly yet another badly designed product.

Hum and buzz from an unshielded toroid at close proximity is just plain laziness and cost cutting. Mu-metal/grain oriented steel have been used for many decades around toroids and to prevent EI transformers from radiating crap into associated circuitry.

I don't think a single piece of my older HiFi gear with toroidal transformers in it isn't either potted and shielded or with EIs, not having a mu-metal flux strap someplace, along with careful mounting.
Ricky Roma: I subscribe to the law of contrary public opinion... If everyone thinks one thing, then I say, bet the other way...
OP

Worth adding https://www.audiosciencereview.com/...urson-sparkos-sonic994-1612.3305/#post-153240 here, because is somehow related. Seems that default NE5532P easily outperforms the MUSES01 when used in I/V stage. 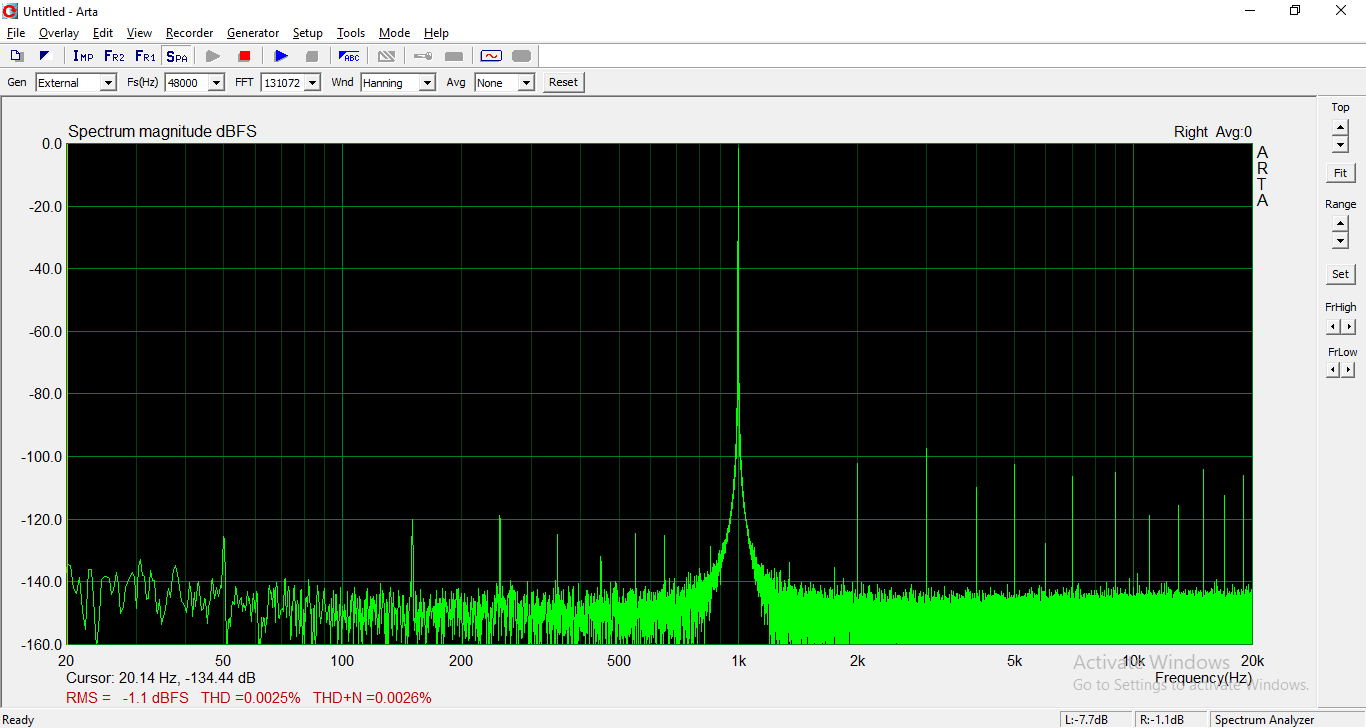 NE5532P in I/V, MUSES02 in LPF (headphones-output jack)
​
Worth mentioning that adding Wyrd makes no difference in any of the spikes or noise-floor. Also, COAX input makes an identical graph (ASUS U7 used as transport).

Thank you, I will replace LME49720 with NJM2068 on one channel only and measure the THD+N to compare it.

If you're referring to the output resistors after the LME49600, I honestly don't care much, because I had it tested already with 16 Ohms IEMs and also with dummy 10 Ohms resistors and I got perfect neutrality and linear THD+N over the entire audio spectrum. Of course, if I'll ever encounter an issue in regard with the damping factor or if I suspect any oscillations, I will definitely remove the output resistors and replace them with inductors in parallel with resistors (less than 0.1 Ohms resistance), like here: http://www.twistedpearaudio.com/docs/linestages/ventus_ez_schematic.pdf.
S

My measurements are all @ 1V RMS, but when doing those tests on 2V or perhaps 5V, usually THD+N gets better. Although, https://www.stereophile.com/content...-processor150headphone-amplifier-measurements gave 19 bits of resolution on 600 Ohms cans to the MUSES version.

Below measurements done with 1V RMS on headphones output, NE5532 vs. MUSES (it's on my modded Essence One combo): 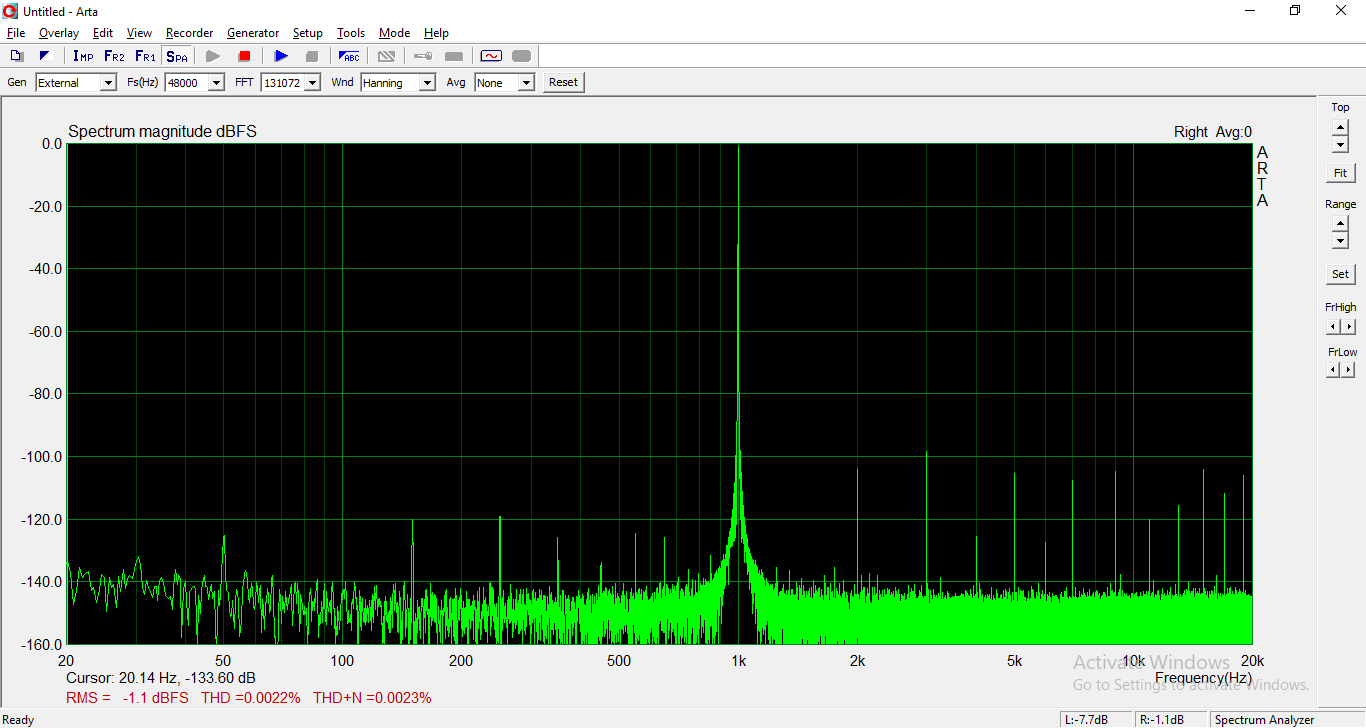 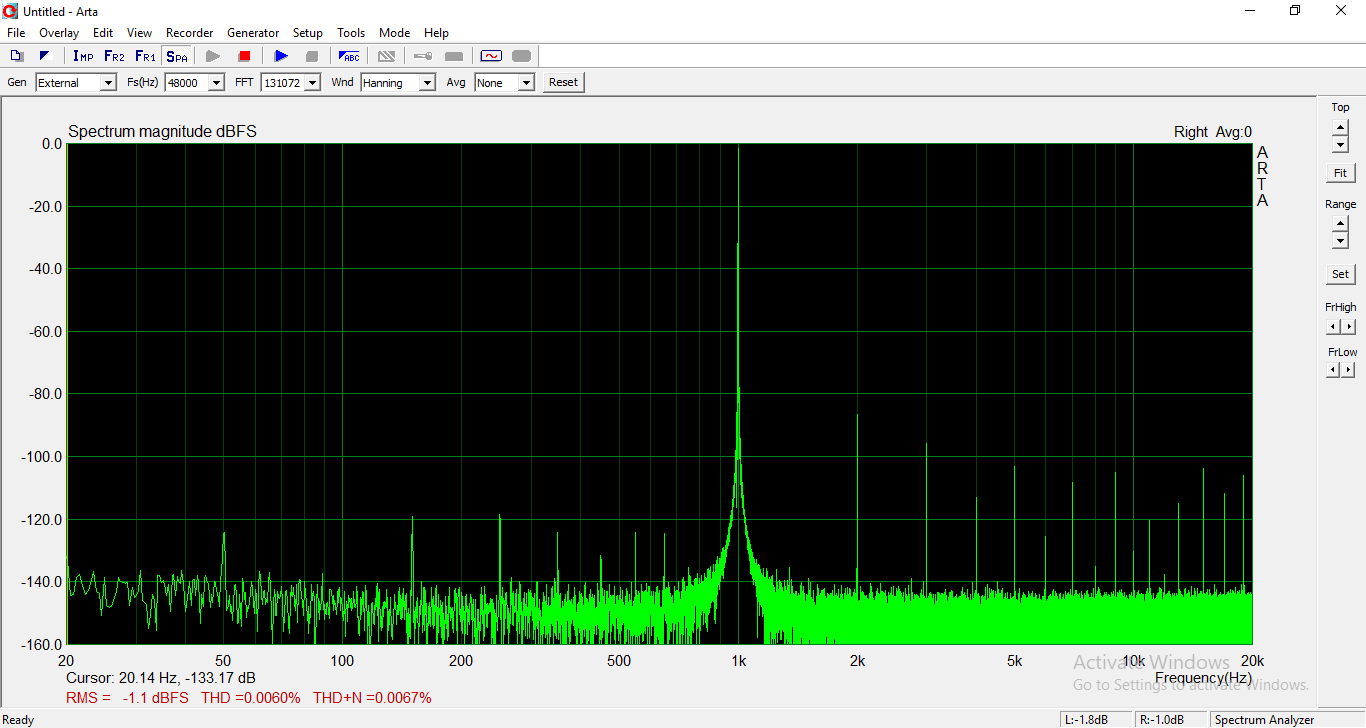 ​
Worth mentioning that in A/B tests 10 out of 10 tests were favorable to MUSES, I've no idea why, but with NE5532 it definitely measures a bit better. I'll try to find an original Essence One and test them both side by side.

Given the low price of the Khadas and Atom, I think it could be a better match.

P.S.: What I like most to my modded E1 MKii is the very low background noise and it's ability to drive cans up to 7V RMS. Of course, the built-in pre-amplifier is perfect for me to drive my Mackie monitors + subwoofer on RCA-out and my Matrix M-Stage HPA-3B on the XLR plugs.
You must log in or register to reply here.
Share: Facebook Google+ Reddit Pinterest Tumblr WhatsApp Email Link