Any reason to upgrade amp from Denon X3600?

In case anyone is still reading... I did perform some additional testing with the AB switcher I built.

My first test here was to compare the Denon X3600 output to a Nobsound Mini amp I had laying around. The Nobsound is a bargain basement class D amp, about 30 WPC, and only $34. Surely I'd hear some difference from the Denon X3600, which got a commendable review from Amir. Speakers are Philharmonic BMR. The Denon was set to "Pure Direct" mode, which disabled the subwoofers and any room correction/DSP. PC was the source, using HDMI.

The Nobsound's gain was too low for the Denon's pre-out output, compared to the Denon amp's output. To boost the gain, I used a JDS Lab atom (also well reviewed) as a preamp to the Nobsound. Now I could do some level matching: 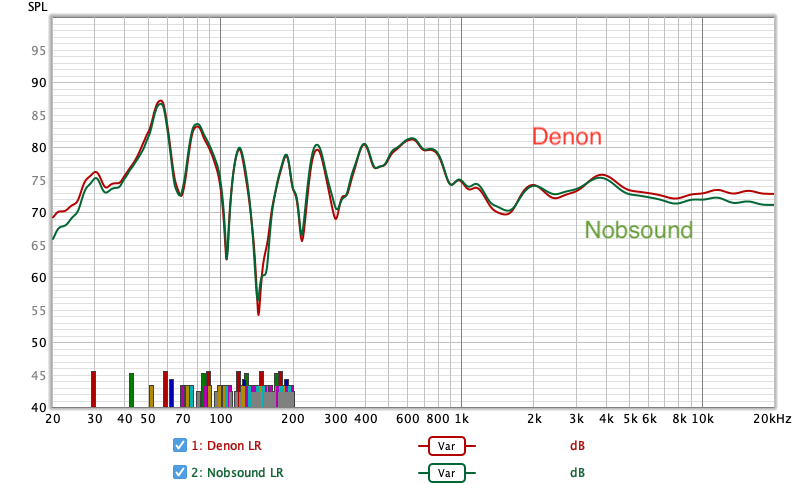 From the frequency response plot, there is about a 2 dB low/high frequency roll-off from the Nobsound. This is probably because the amp has lower bandwidth than the Denon, so it would be expected.

For the blind listening test, I recruited my wife to control the AB switcher. She did not know which setting corresponded to which amp, so she was blind to it. I did not see the AB switcher, so I was blind to the setting. The AB switch was instantaneous; one click and the amps were toggled. The listening volume was 75-80 dB, which was on the loud side for us. We played various music, both lossless and streaming, and our conclusions can be summarized:
- For myself, I could not tell any difference whatsoever. Every time the amp switched, I struggled to hear any difference. I also saw the frequency response plots beforehand (my wife did not), and was looking for a high frequency difference, but couldn't hear it.
- Surprisingly, my wife was able to hear a distinct difference between the two amps. She was able to hear the attenuation in the high frequency of the Nobsound (which I told her after the test was over), that I was not. I presume she has more sensitive hearing than me.
- My wife's preference was for the Nobsound, because the high frequency roll-off made the highs less harsh. She also described that amp as sounding slightly more fuller in bass. The frequency response plots don't explain that, but I'm guessing it's a psychoacoustic effect where rolling-off the highs allows us to perceive lower frequencies better. This had me thinking - some amps, like tube amps, roll-off at high freqs, and give a "warm" or "tubey" sound, as described by some audiophiles. This seems to just be equivalent to a tone control. If an amp's undesirable traits (HF roll-off) are being used to compensate undesirable traits of a speaker (brightness), then that seems like a backwards way to achieve a desired tonal response. Better to use a DSP or a preamp with tone controls, I'd think.

So there you have it. My limited pseudo-scientific test found that there was a difference between a bargain basement $34 class D amp, and a well-measuring AVR, and the former had a slight preference subjectively. Ok so the next step is to get a better amp like a Hypex/Purifi. I may consider this later (after I'm back from some well-earned vacation). But given the law of diminishing returns, I suspect I won't hear a difference. I also suspect my wife will prefer the amp that has the HF roll-off, which a higher-end amp may not have.

One additional comment - I also tried the listening test and switching amps in "stereo" mode, which enables the subwoofers and Audyssey XT32 room correction. In this configuration, the Nobsound would occasionally make clicking/popping noises during certain parts of a song, and was repeatable (the same part of a song would always make the noise); the amp was probably clipping/distorting. This could suggest that room correction can decrease headroom on an amp, so one with higher power is needed; or, the room correction has dependence on some specific characteristics of the amp. I could have rerun Audyssey with the Nobsound to further explore that, but that's more work than I want to sign up for.
You must log in or register to reply here.