This is a review and detailed measurements of the AudioQuest Wind RCA "PSS Silver" cable. The sample I have was kindly donated by a member and costs US $2,300 in the 1 meter configuration. No, that is not a typo. It is over two thousand dollars for a pair.

The cable comes in a rather cheap carrying case. What is that about? Are you going to carry this to your friend's house to show off? Or store the cable in it until the right romantic moment to pop it out to use with your system?

The cable itself has the look of "high-end" cables: 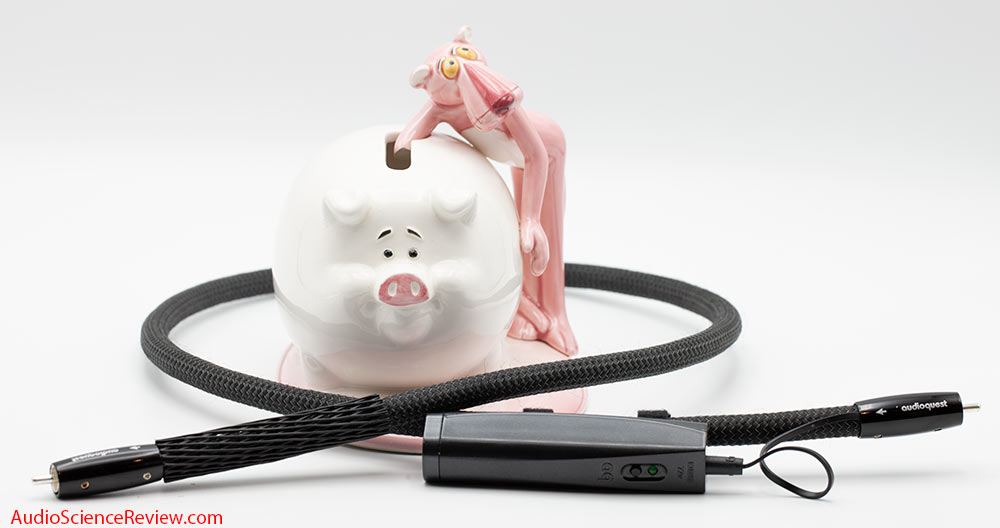 As you see it also has their "DBS" (Dielectric Bias System) which puts a static DC voltage along one wire in the cable. I have tested the DBS to have no effect in my previous Audioquest Victoria Cable review. I will take another shot at it here in a different way.

Usually these cables have a death grip on the RCA connectors but not these. They would hold on but softly and no more than any generic cable. Given their heavy weight though, I wish there was more holding power. You can see part of the reason for this is the super thin outer RCA ring: 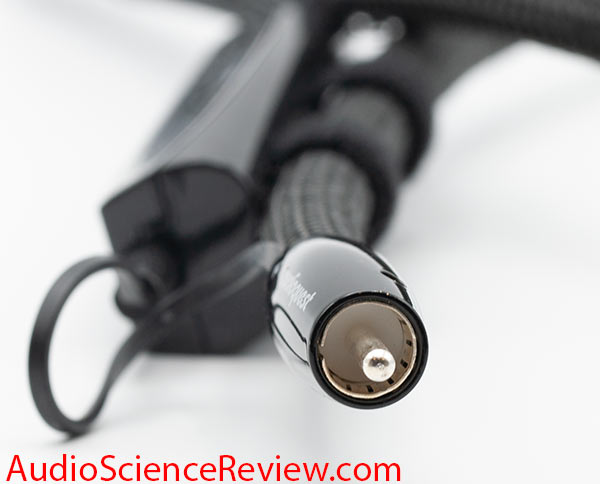 Back to the weight, the inclusion of the DBS battery pack makes these cantilever even more. Be sure to have super sturdy RCA connectors on your gear before you use these. Or else, invest extra in cable lifters because you physically need them here.

AudioQuest Wind Audio Measurements
These cables can go three different ways: do nothing, do something good, or make things worse. Let's start with our usual dashboard to see if we can get quick indication of any of these options. But first, let's test our setup with a generic 1 meter cable I got for free in a DVD player I think some 20 years ago. It is a single cable (i.e. not stereo pair) like the Wind: 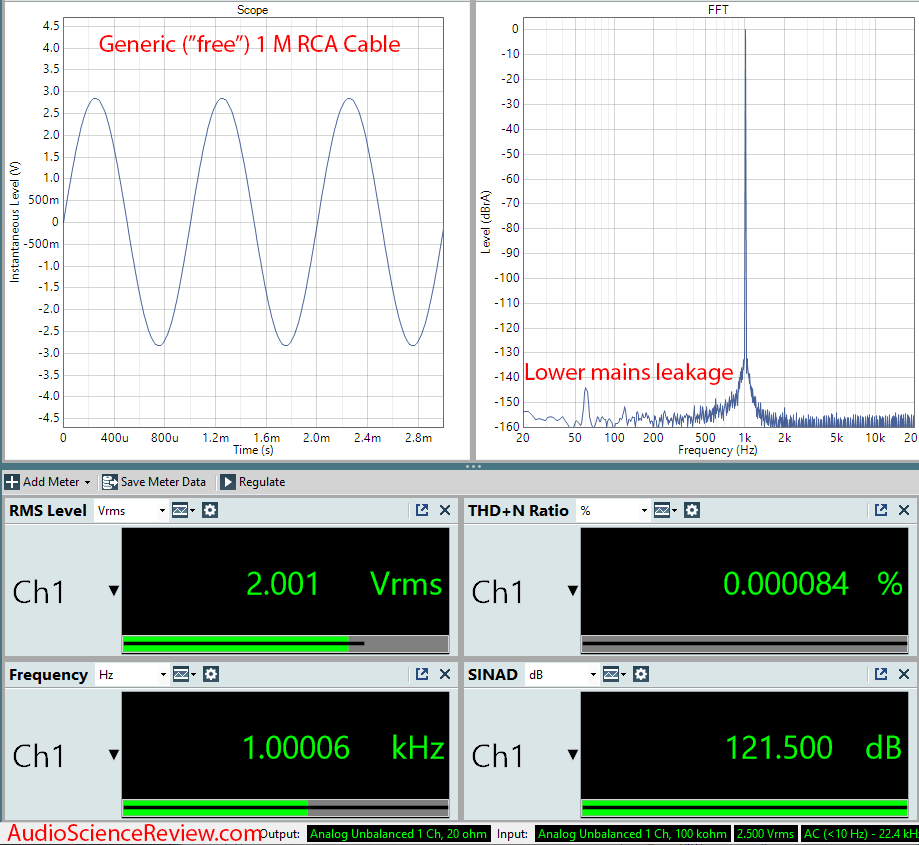 Bless my $28,000 Audio Precision APx555 for generating such a clean signal and ability to measure it just the same. Combined noise and distortion are below -121 dB at 2 volts output. The spectrum of distortion and noise goes down to whopping -160 dB courtesy of signal processing (FFT process gain). The only thing visible at this low level is mains AC leakage to the tune of -145 dB.

Now let's switch to Audioquest Wind with the same setup: 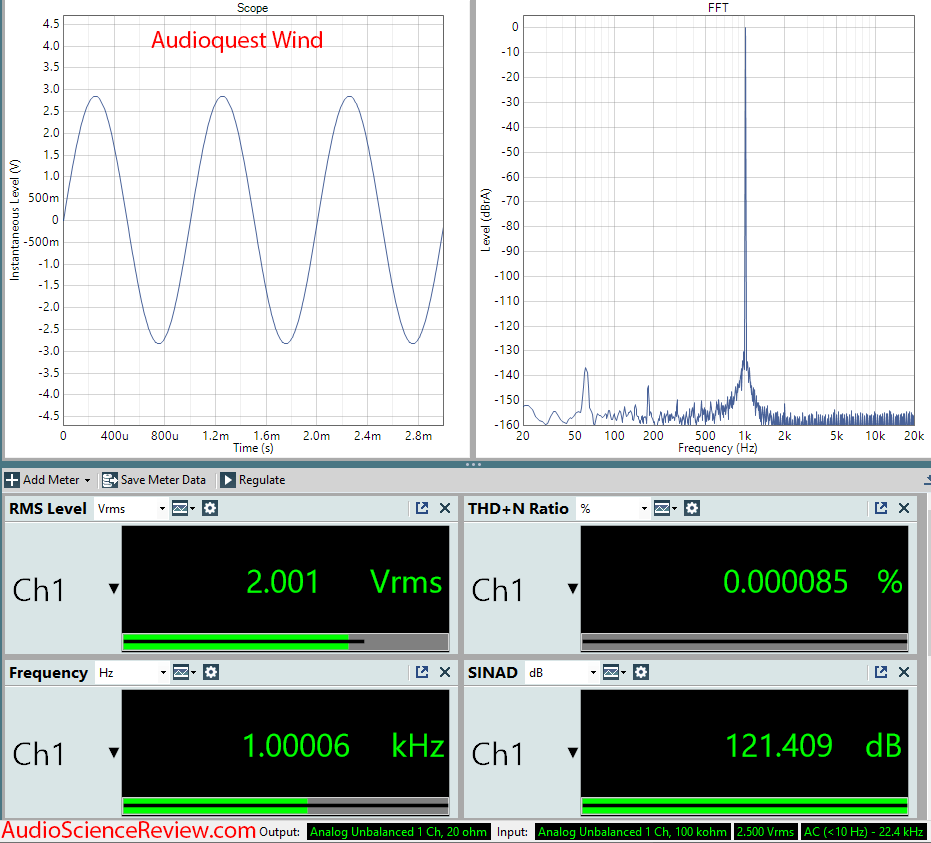 Overall numbers remain the same but I see that the mains leakage has gone up 7 to 8 dB. And now we see its third harmonic at 180 Hz as well which we did not see before. Put a pin in this for now and we will come back to it.

To go after testing impact of DBS, I thought I reverse the cable. Whatever it is about, should get totally screwed up since the battery is supposed to be at one end of the cable: 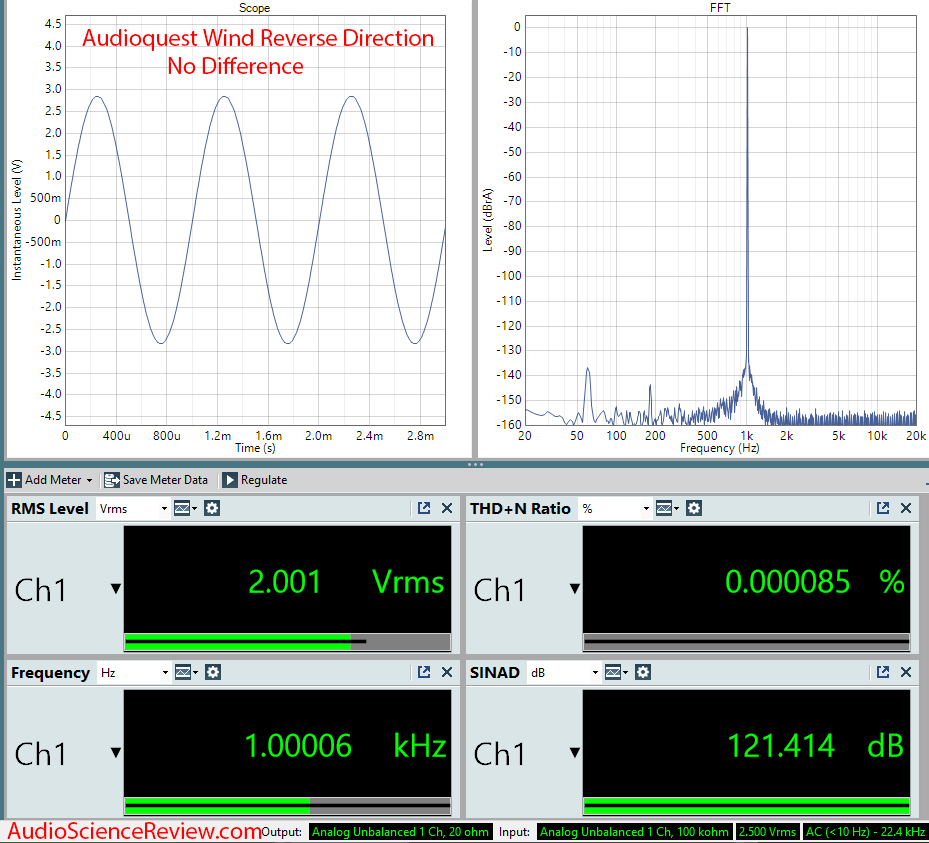 Not a thing changes. We are going to depth of noise and distortion analysis that is so many orders of magnitude lower than our hearing that it is not funny. Yet there is no effect whatsoever. Clearly the DBS circuit is doing nothing here as the "designers" say it does. 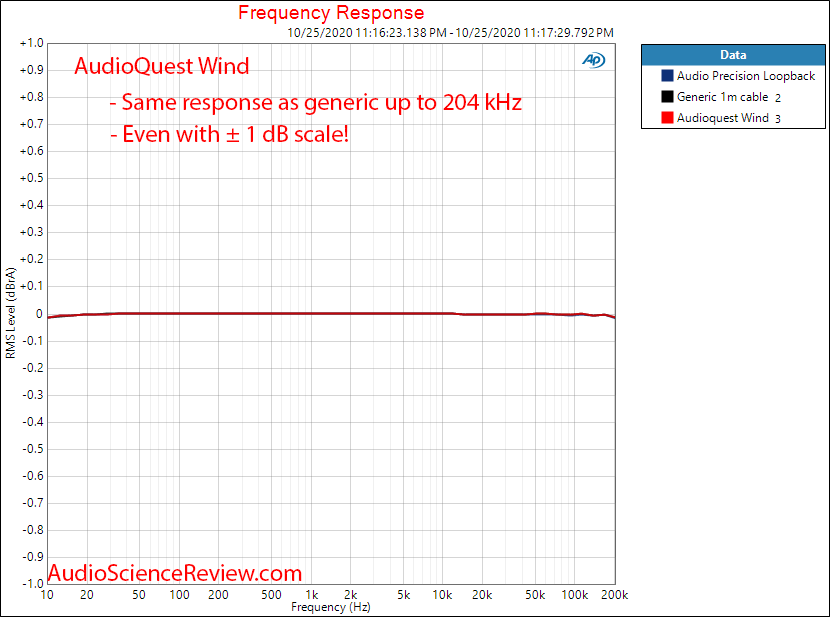 Now let's measure the noise that exists in the system with the cable hooked up but nothing driving it: 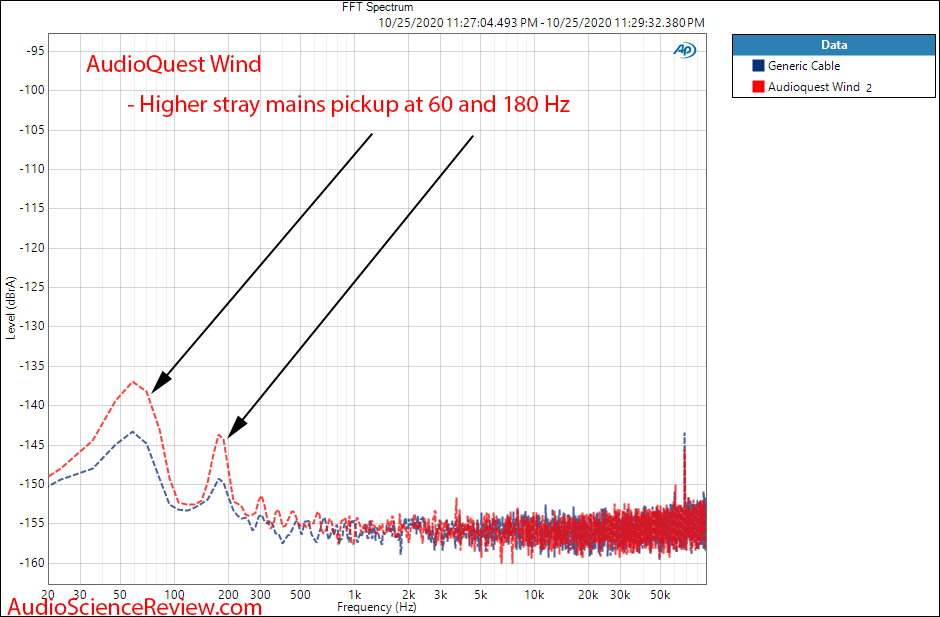 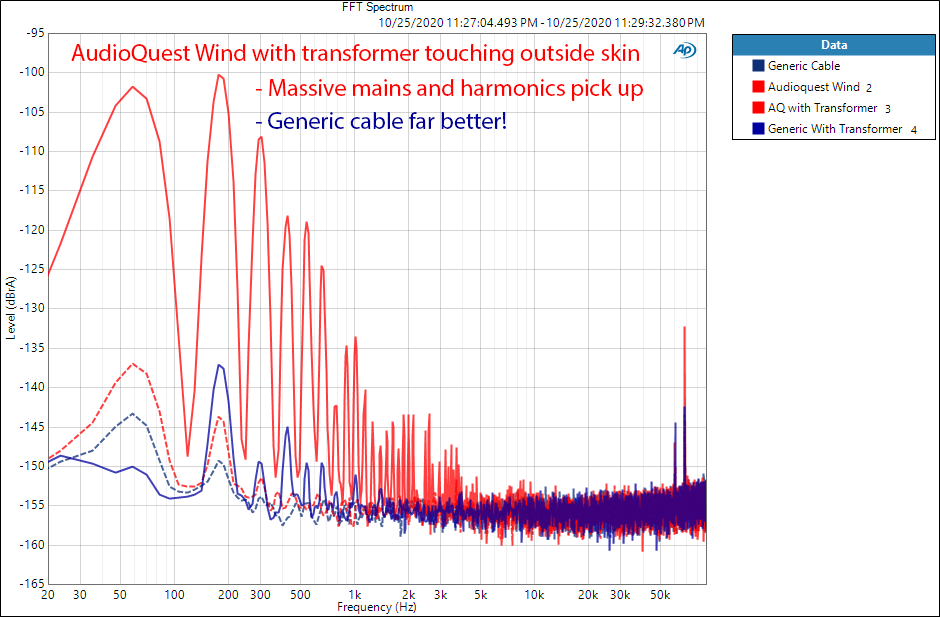 Wow! The generic cable in blue picked up a bit more noise but look at the AudioQuest Wind in solid red. It is picking up huge amount of mains noise relative to our generic cable! Stunning how high-end cables are sold with the impression that they reduce noise and such and yet this cable is clearly much more susceptible to interference than free cable.

What is amazing about this is a bullet in the product feature list from AudioQuest:

It is easy to accomplish 100% shield coverage? So why do we not have it here? And what noise dissipation?

AudioQuest Wind Cable Listening Test
I hooked up my RME ADI-2 FS DAC V2 to a Topping A90 high-performance headphone amplifier alternatively using the Audioquest Wind and Generic able. The output of the A90 drove my Ether CX headphone. I could not detect a difference between the two in this limited testing. Mind you, there was more air when listening to the Wind. But then my wife who was in the kitchen informed me that the dogs had left the patio door open and whether I was OK if she closed it. Once she did, the air factor disappeared.

Conclusions
You know, it is one thing to sell a cable for a lot more money that does nothing extra. It is entirely another matter when the cable actually screws up the signal much worse than a free cable as the AudioQuest Wind seems to be doing here. Whether it is the outer RCA connector that is not gripping properly, the construction of the cable, or both, clearly the basic job of doing no harm is not followed. A bit of measuring like I did would have shown problems like this to them. But of course they did not bother. They imagined a bunch of problems, created imagined solutions to them, and started to sell the product with unverified claims as I quoted.

So please folks, I don't care which audio camp you are in. Ask manufacturers to demonstrate what the benefits they advertise. They say they lower noise? Ask them to show before and after measurements. We know how to measure noise. If we don't, how do they know they reduced noise at all?

Anyway, of course I cannot recommend the AudioQuest Wind cable in any form or fashion.

The garden is struggling to keep producing despite the near freezing cold snap. Picked a few oversized Kohlrabi. Second year I have planted them but have had no chance to even taste them! 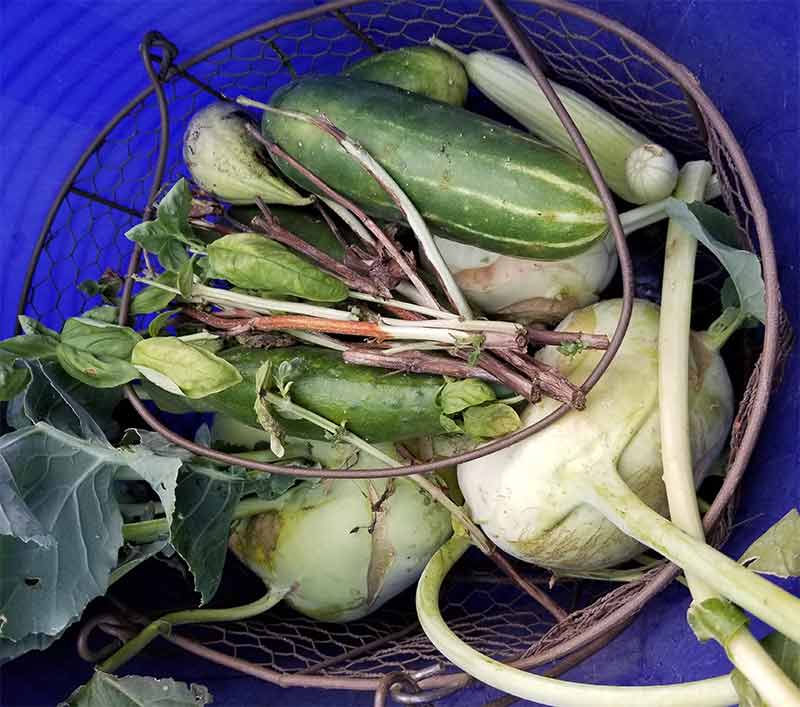 The cucumbers are mostly from the greenhouse. As is the last bit of Basil from one of the pots which we put in our salad last night. Have a dozen or so more which have their last harvest now. They were great all summer. Produced a ton which we froze as pesto. You cut the tops off and they shoot up three new branches!

Classic AudioQuest, just like throwing your money into the wind

The fact it has worse noise rejection is funny.

Can this post be used as a reference to end 'best performing cable' threads?

Anything better is unnecessary.
Einstein: If you can't describe it simply, you don't understand it well.
Wombat: Or your explanatory skills are deficient.

Im suprised it had no effect on frequency response. Figuered that would be it's trick.
Thanks for taking the time to test it.

OOOps.. Somebody over at AudioQuest is going to have a rough day tomorrow.

I do like cables though, so I build them myself using pro audio cables and connectors that are shielded, super flexible, visually discrete (especially in light colors - no bling), and I have fun doing it... At least I know they are at the same level as the ones used in the recordings I listen to. They usually cost me about $20 to $30 in parts (my time is free since it is a hobby...).
Primary: Roon (Core running on MacOS) -> Element H - > Topping U90 -> (AES/EBU) Genelec 8351B
Primary Alt: (Streaming, USB or S/PDIF) -> Okto Research Dac8 -> (analog) Genelec 8351B
Home Office: Roon -> RoPieeeXL -> Topping U90 -> (AES/EBU) Genelec 8330A
Headphone system: Roon (MacOS) -> Modius -> Magnius -> Drop DT 177X GO or Hifiman Sundara
All cables DIY using Mogami, Belden and Supra cables with Neutrik connectors.
A

Well now we have it on record that Amir from ASR confirms that AudioQuest cables provide more air. This proves the superiority of audioquest cables, speakers or headphones without air most absolutely should add this cable to their rig.
please ignore the window part

Amir, it would be great (and hilarious) to see a picture of the better, free cable. I mean, this is kind of a double review anyways!

But did you test with audiophile-grade batteries?!?!

New caveat: Warning, testing by other than Audioquest will reduce performance to that of cheap products.

Einstein: If you can't describe it simply, you don't understand it well.
Wombat: Or your explanatory skills are deficient.
3

This reminds me of a meet I had at a buddy of mine's place several years ago. At the time we both were huge fans of the hifiman he6 headphone. There was a company(can't remember the name) that sold aftermarket he6 cans with the cable hardwired bypassing the connectors. I believe this set you back an additional 1000.00 instead of buying them from hifiman and bypassing the warranty. He rant and rave about how much better they sounded, and the fact that they now were louder, easier to drive.

Of course this opened up a whole can of, what if the cable failed down the road, the price to get a new hardwired cable soldered on to the connectors, etc. So I brought my stock pair over to do some listening comparisons. Well it's safe to say that they both sounded exactly the same. Mine was still under the 3 year warranty, which I had to end up using in which I ended up with a brand new replacement pair. And I could change cables at will. I actually did for ergonomic purposes given how stiff the stock cable was. Suffice to say it wasn't long after he found a sucker to take them off his hands.

I remember sometime back someone tested a high end cable against a coat hanger, with no differences found. Granted, it was a very high quality coat hanger.
Electronics hardware and software design engineer for a leading manufacturer of high end audio power amplifiers and preamp/processors for home and professional cinema use. We manufacture our own branded product lines and are a large ODM/OEM manufacturer.

Universal Cereal Bus said:
But did you test with audiophile-grade batteries?!?!
Click to expand...

Some Samsung batteries add warmth - before self-incineration.
Einstein: If you can't describe it simply, you don't understand it well.
Wombat: Or your explanatory skills are deficient.

franspambot said:
Amir, it would be great (and hilarious) to see a picture of the better, free cable. I mean, this is kind of a double review anyways!
Click to expand...

Sure. Here is a shot of it: 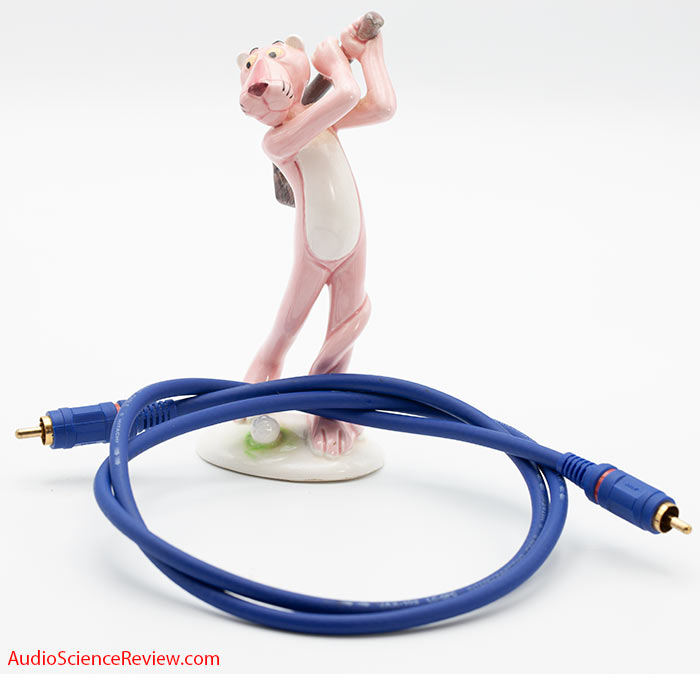 Zooming in, I was surprised that it is made in Japan, Hitachi cable!

It is even directional for bloody sake!

I wonder if it came with one of my high-end Sony DVD or SACD players of the time. It certainly has been a durable cable and I often use for S/PDIF connections.
Amir
Founder, Audio Science Review
Founder, Madrona Digital
Review Thread Rules
My Technical Background
My YouTube Channel

amirm said:
Here is a shot of it:
Click to expand... 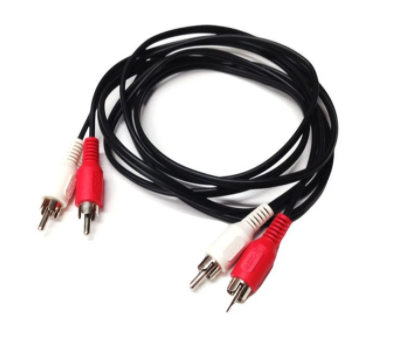 RayDunzl said:
I was expecting something like I have:

I have a box of those as well. I wanted to use a single wire interconnect so reached for the blue cable per above.
Amir
Founder, Audio Science Review
Founder, Madrona Digital
Review Thread Rules
My Technical Background
My YouTube Channel
You must log in or register to reply here.